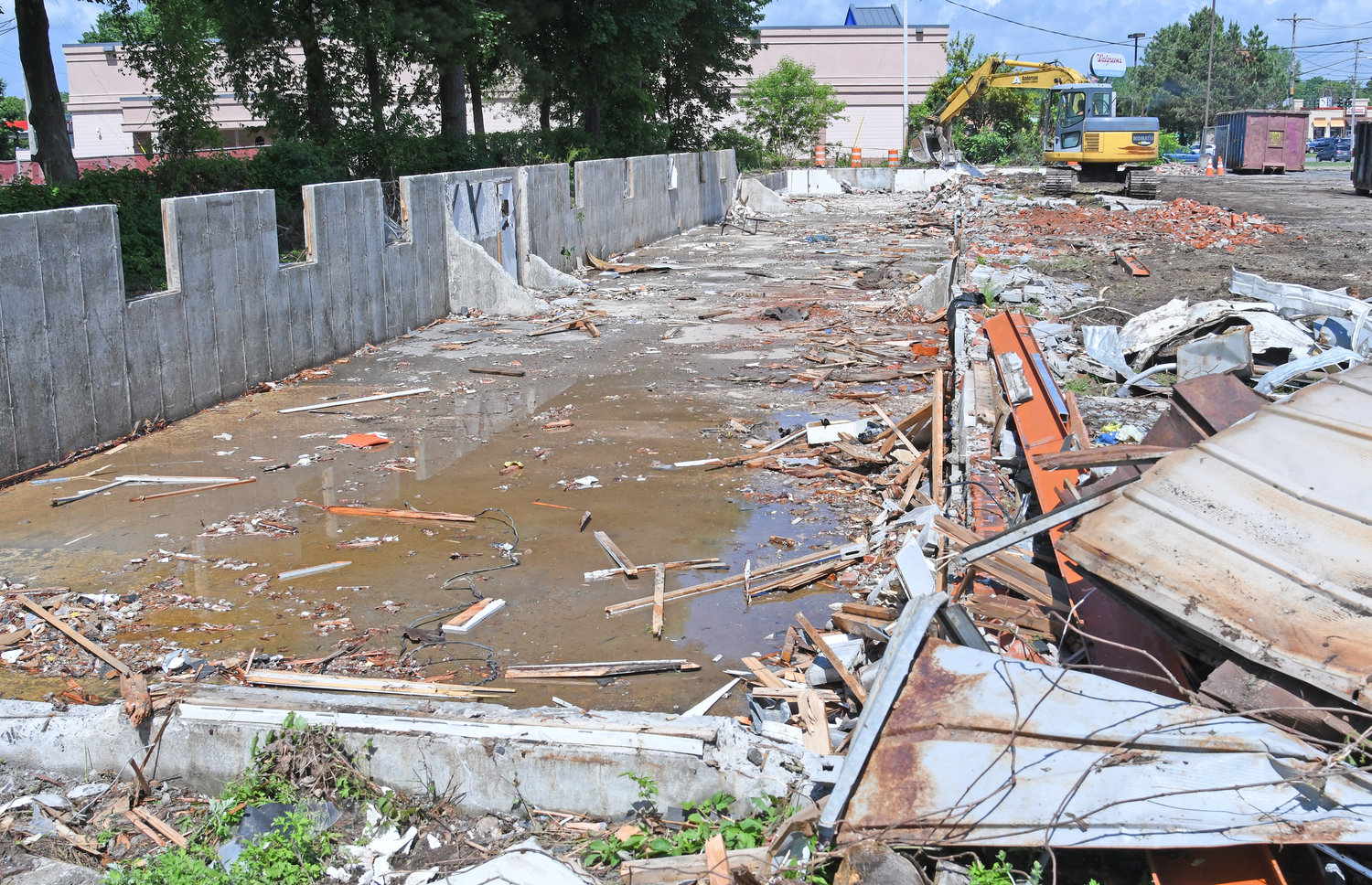 DEMOLITION REVS UP — Crews remove an old building at 310 E. Chestnut St. which once housed insurance, medical and other business offices. A proposal to construct a tire and auto repair center at the site received approvals from the city’s Zoning Board of Appeals; the business will now bring a proposed site plan before the city’s Planning Board for its review and approval.
(Sentinel photo by John Clifford)
Posted Saturday, June 5, 2021 11:16 am
Nicole A. Hawley
Staff writer
email

Area variances for the demolition of the existing building and construction of a new 7,700 square-foot tire and auto repair center at 310 E. Chestnut St. were approved by the city Zoning Board of Appeals during its regular monthly meeting Wednesday.

As part of the zoning requirements for the district and type of business, Cale Tallman, manager of Tallman’s Tire & Auto Repair, said no vehicles would be stored outside the business past 15 days, and that he and company president, Tim Tallman, had no plans to sell new or used vehicles at the property. Any vehicles awaiting repair would be stored inside, so there would be no potential dripping of fluids into the stormwater or sewer, he added.

There are plans to install a 6-foot fence around the perimeter of the property and to remove the fence already there. Tallman’s will operate during normal business hours — will not be open early mornings or late evenings, and will be closed on Sundays and holidays, Cale Tallman said.

“There will be no smoke, vibrations or excessive noise — everything will be contained internally in the building, so any noise will not be in proximity to the community-based establishments,” said Tallman. “The previous building had several tenants, and we’d be one tenant. We believe the business fits well with the area; it’s not intrusive and it’s similar in scale to the existing structure.”

Item 1, a request for a special use permit, with the new building placement to encroach within the prescribed rear yard building setback, was unanimously approved.

“The rear setback is rectangular but a little shallow, and it’s very wide, so it works well for our setup, but we want enough room for a smooth parking lot in front and enough size of structure so as the business grows, we can make sure the building is attractive,” Tallman said. “It won’t impact the neighborhood. The (nearby) apartment complex is far off the current space behind there.”

The Tallmans will also remove some trees at the rear of the property, particularly those that have grown into the chain link fence so that it can be removed.

Item 2 was for an area variance for the new building to be situated on the building site where the rear setback between the building and rear lot line is 10-feet. According to the city variance, there should be a minimum 15-foot setback.

Tallman said the area variance was needed for the front edge of the property for the concern of having enough parking and depth so that it’s not awkward backing vehicles in and out of the building. The design of the parking lot, he said, would also include some landscape islands coming off the green space from the corners of the property. Tallman proposed having 30 parking spaces so that there was enough space for snow removal in the winter, but with the business having just eight bays and there being three employees and a manager at the business at one time, some board members questioned if that amount of parking spaces was needed.

Mary Palermo, of 101 Urbandale Parkway, wrote an original letter to the board stating the business was out of character for the neighborhood and not needed, seeing that similar businesses existed on neighboring Black River Boulevard. She was also concerned about traffic, noise and pollution. The board, however, received an addendum with Palermo rescinding her comments about the businesses being out of character for the area, but she was still concerned about traffic, especially while there is a detour in place due to construction of the bridge over the Mohawk River on Floyd Avenue.

Chief Code Enforcement Officer & Building Inspector Mark Domenico said the city received correspondence from the state Department of Transportation stating that a highway work permit would be required if work is done within the highway right-of-way prior to construction, and a utility permit is required for any connection to the business, proposed landscaping, signage, advertising, etc., and that any signage must be located on the private property.

Zoning Board Chairman John Sorbello expressed concern for lack of landscaping and green space, and as for the amount of parking spaces being proposed, “30 spaces seems like a lot.” But Tallman said he’d be willing to lose a few spaces for additional landscaping. Sorbello then made a motion to amend the application to remove four parking spaces and include the addition of more landscaping to the building proposal, which was denied by a 3-2 vote. Board member James DiCastro said he disagreed with the motion because he felt Tallman may need that amount of parking so he has additional area for snow removal.

Item 3 requesting an area variance so the parking lot paved edge along the Chestnut Street side would be constructed up to the property line, eliminating the possibility to install the required landscape buffering between the parking lot and street was approved by a 3-2 vote. Sorbello and board member Joseph Pasqualetti Jr. said they voted against granting the variance because of the need for additional front landscaping.

Item 4 was for an area variance required for the parking lot landscape abutting the street lot line. According to the item, the parking lot design did not meet the prescriptive requirements for the required parking lot interior landscape. Again, Sorbello voted against Item 4, but the variance still passed by a 4-1 vote.

Overall, the proposed project for a tire and auto repair business built by Tallman was approved for the property. Tallman’s proposal will next appear before the Planning Board for a Site Plan Review.

• Onofria Bohning, owner of 209 Henry St., was seeking to construct a non-covered deck at the northwestern side of her house, resulting in the edge of the deck being placed within the required side yard setback. The proposed extension of the deck would result in it being placed 2.3-feet away from the property line. A letter was received by the only potential affected neighbor, who gave his approval for the project. Bohning said there is a unique entrance to her home — the main entrance is not in front, but located on side, which explains the side deck construction. The pre-existing deck, from when she purchased the home back in 2013, is worn and in need of rehabilitation. She said she also wished to extend the deck toward the rear of the yard, with plenty of land to do so. The depth of the deck will be 34-feet, and it is about 24-feet now. The area variance was granted by unanimous vote.

• Danny Frieden, co-owner of Copper City Brewing Co., 1111 Oneida St., was seeking an area variance to extend the corner side yard patio of the business, with a 10-foot minimum setback from the corner side lot line. Frieden said Copper City was looking to extend the now existing patio by 6-feet, 8-inches into the existing grass area. He said the patio would not encroach traffic seeing the business is located on a dead-end street and with an already existing door in the area, there would be easy access for customers in and out of the minor expansion. There would also be significant space from the roadway, it won’t be near city property and there will be plenty of room for stormwater runoff. “Now with COVID, we realized there’s a great potential to get more people safety out there on the patio,” Frieden said. The variance was unanimously approved.

• National Grid, 308 Canal St., proposed to relocate gas equipment from the city right-of-way to the parcel. The gas and electric company has plans to install an 8-foot fence around the perimeter of the property to protect its gas regulator equipment and was seeking an area variance. A representative of National Grid said since 1996 the existing station had been refurbished numerous times, and the conditions below ground had deteriorated due to rain and snow corroding equipment. Based on a recent risk assessment, it was determined the underground equipment needed to be replaced, the representative said. The installation of a gas regulator station is necessary to provide safe and necessary gas and electric service to thousands of area homes and businesses, and there is a risk of an outage if it’s not replaced. Last year a similar station was placed on Elwood Street, and the representative said there have been no complaints regarding that location and propose the same type of security fence for the Canal Street location. The variance was unanimously approved.