Whitesboro outlasts Camden to advance in Class B playoffs 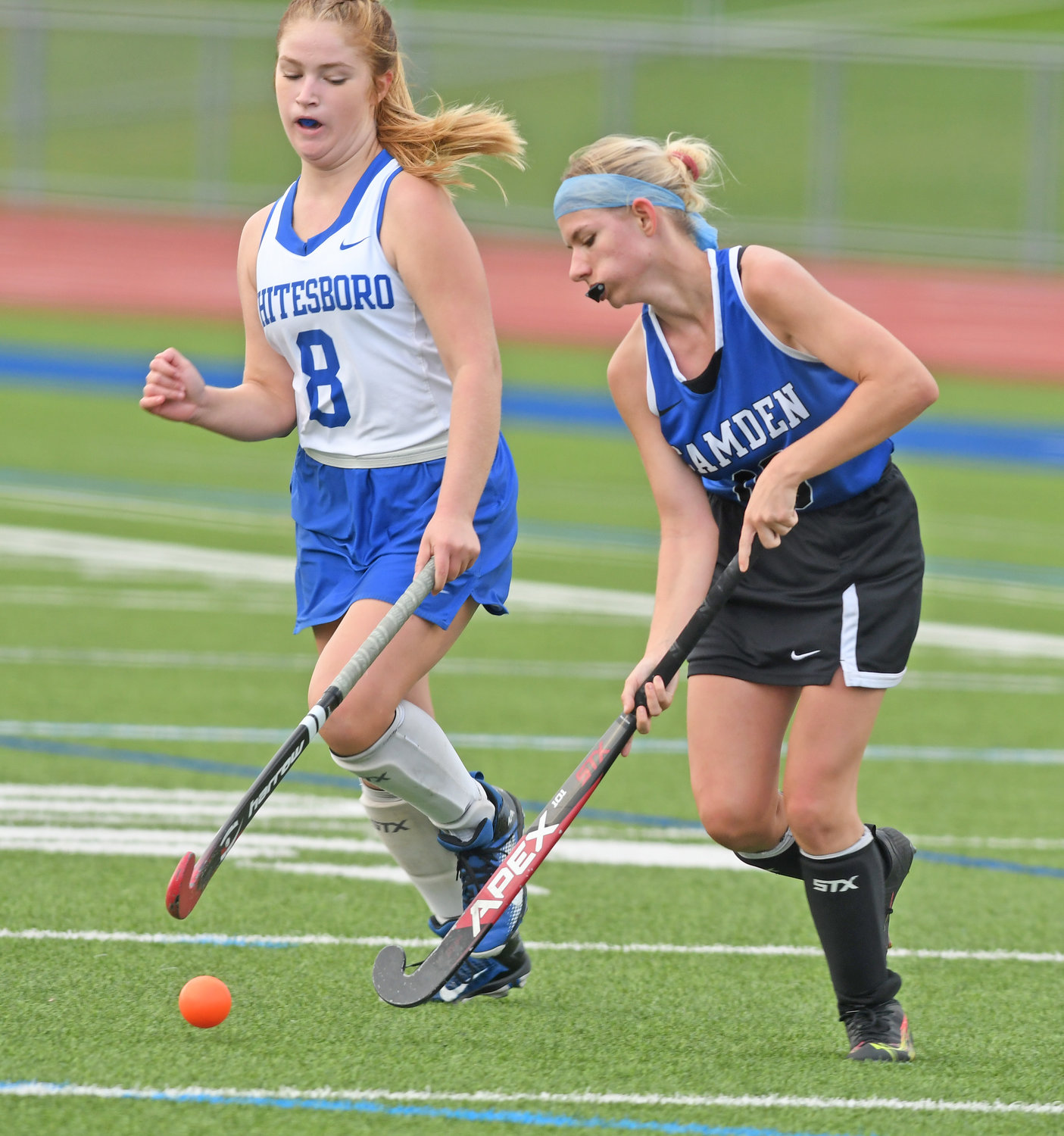 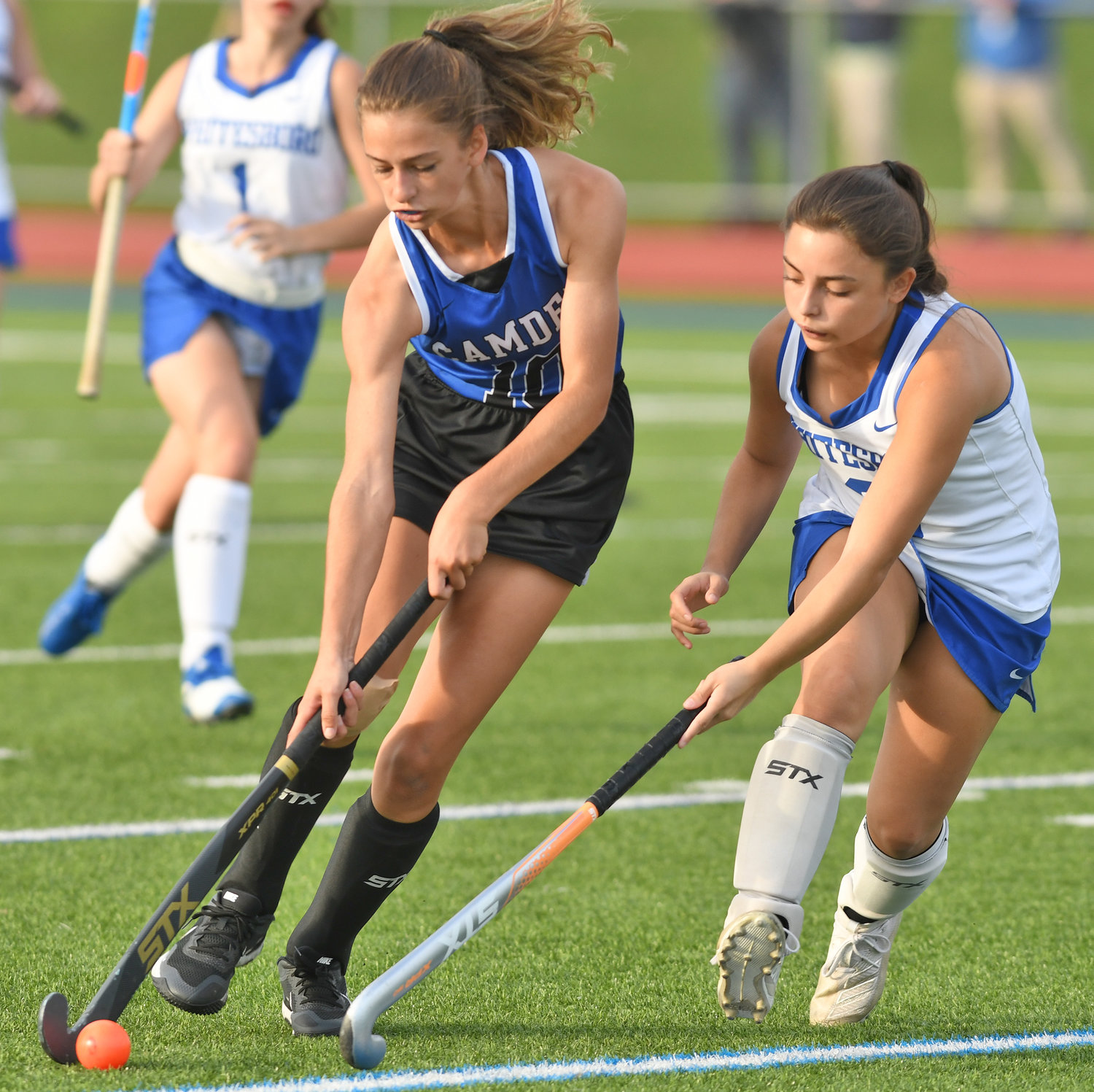 KEEP AWAY — Camden’s Avery Prievo, left, tries to get the ball past Whitesboro’s Paris Wells in the Section III Class B quarterfinals at Whitesboro Wednesday. Prievo scored the game’s first goal but Whitesboro won 2-1 in double overtime.
(Sentinel photo by John Clifford) 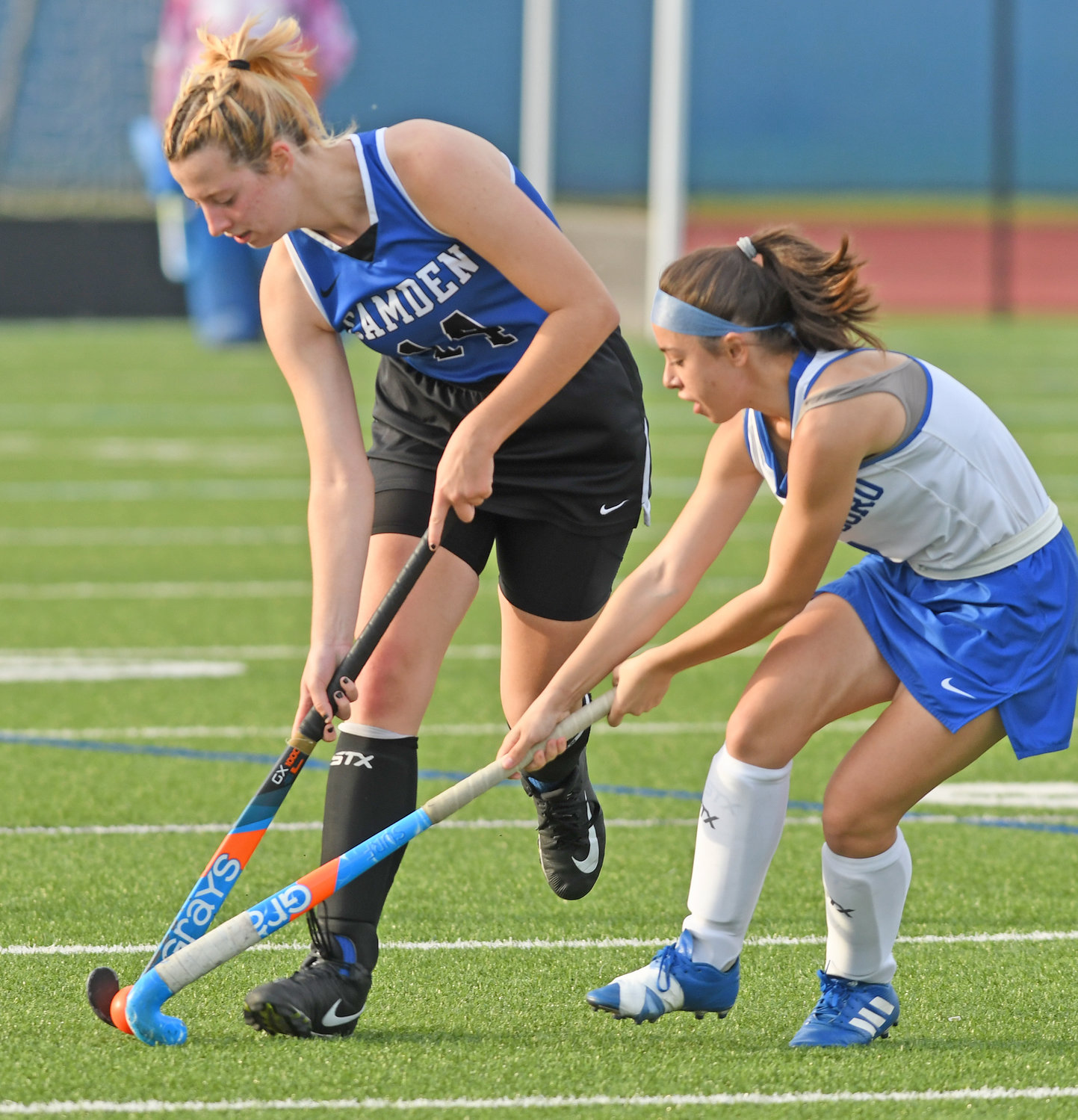 BATTLE FOR THE BALL — Camden's Madison Bird and Whitesboro's Julianna Shaler each get a stick on the ball in Wednesday's Section III Class B quarterfinal game at Whitesboro Wednesday. The Warriors won 2-1 in double overtime to advance.
(Sentinel photo by John Clifford) 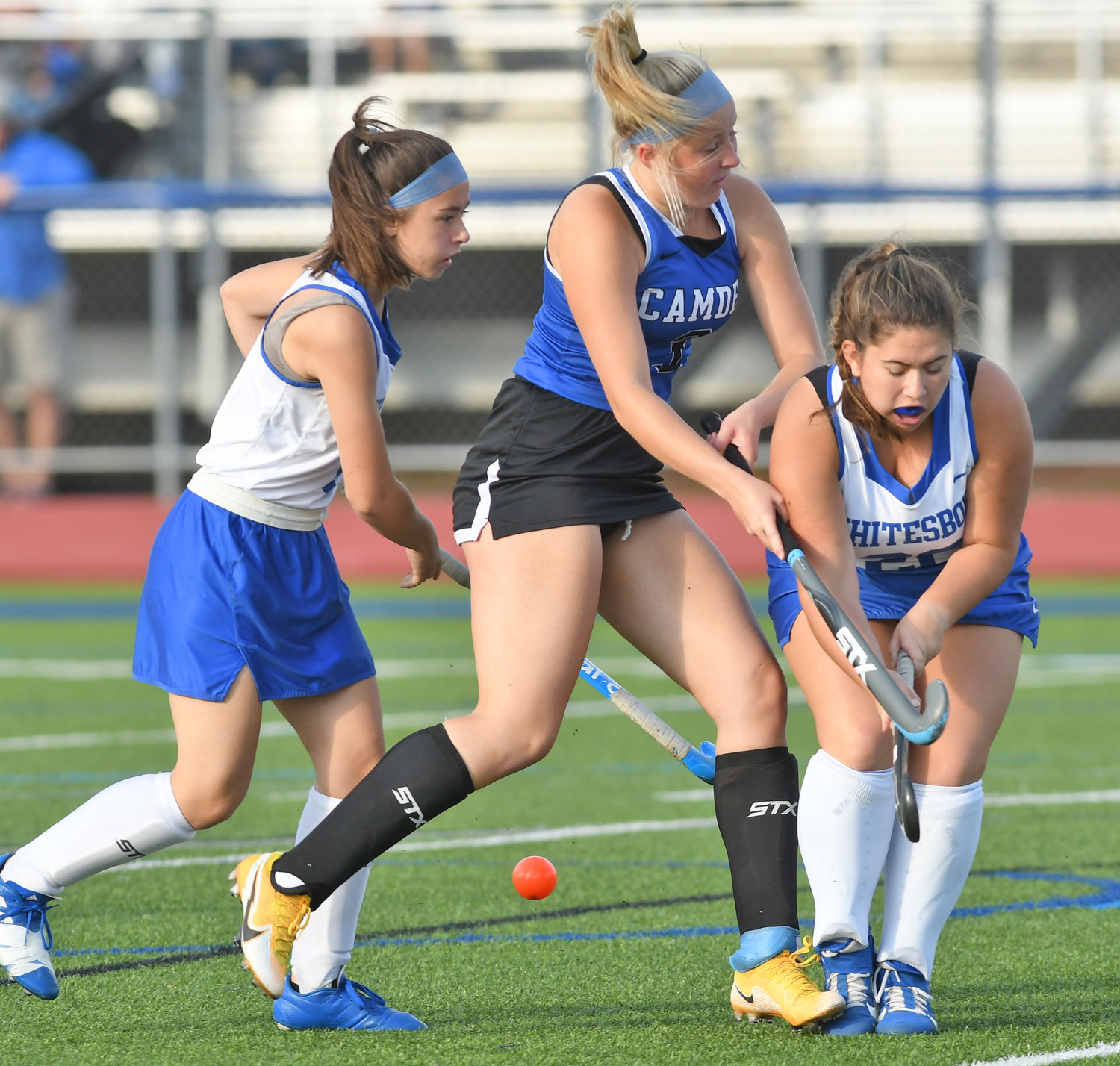 Whitesboro and Camden battled for over 70 minutes Wednesday to decide which team would advance to the semifinals of the Section III Class B field hockey playoffs. Warriors’ freshman Casey Clausen finished off a flury in front of the Blue Devils’ net in the second overtime to give her team a 2-1 victory at home with the sudden death winner.

Both teams scored early goals but the teams would settle in for a back-and-forth affair as they tried to break a 1-1 tie. Whitesboro ended the day with 10 corners to Camden’s eight.

First it was fifth-seeded Camden scoring just under four minutes into the game. Sophomore Avery Prievo found a loose ball in the scrum in front of the Whitesboro cage and pushed it across the line for the 1-0 lead.

“I think that lights a fire under my team,” said Whitesboro head coach Renee LaValley after the game.

It took the four-seeded hosts 48 seconds to equalize. Senior Makayla Arnold scored in almost the same situation as Prievo to get her team back to even at 1-1.

For the rest of regulation and through the first 10-minute, six-on-six overtime period, the teams defended every shot in the cool and windy conditions. The rain held off until overtime, and even when it did come it was sparse.

Whitesboro threatened with two big chances in overtime, but Camden junior goalie Abby Henderson made game-saving stops both times. First she made a sprawling save halfway through the first overtime then kicked a shot away from nearly point blank range with just under a minute left.

One minute and 26 seconds into the second overtime period, Whitesboro was buzzing around the cage again. This time Clausen was stationed on the far side of goal when a shot from the right bounced to her. She tapped it home to win the game.

The teams had played two times in the regular season, with Whitesboro winning by one each time. “It’s a battle each time we played them,” said LaValley.

Of the long stretch without a goal for either team, LaValley said: “It was more offensive, (missing) those connections. They had a great plan on defense.” She said the adjustment was to “go back with the ball so we could then go forward.”

The Warriors (7-10) advance to play top seed Holland Patent (11-4-1) at 5 p.m. Sunday at Vernon-Verona-Sherrill High School. When the teams played at HP on Oct. 7, the Golden Knights won 5-1. It was the lone goal Holland Patent has allowed in winning their last six.

“We have to keep fine tuning our defense,” LaValley said of how the team will prepare. On offense, the Warriors need to connect on more passes, she added.

The second-seeded Rome Free Academy field hockey team, 14-2, will play third-seeded Cicero-North Syracuse, 12-4-1, on Sunday at 11 a.m. in a Class A semifinal at Vernon-Verona-Sherrill High School.

The two teams squared off on Sept. 7 in Cicero and the Northstars won 5-0.

C-NS advanced by defeating No. 6 Liverpool on Tuesday, 3-0.

Jenna Deep scored both of the fourth-seeded Clinton field hockey team’s goals as the Warriors beat fifth-seeded Mount Markham 2-0 to advance in the Class C tournament on Wednesday in Clinton.

Gabrielle Gemelli had an assist for the Warriors and Sydney Labayewski made seven saves in goal.