Students from kindergarten to college are welcome to the D&D Carpets of Rome Back-to-School Supply Giveaway. 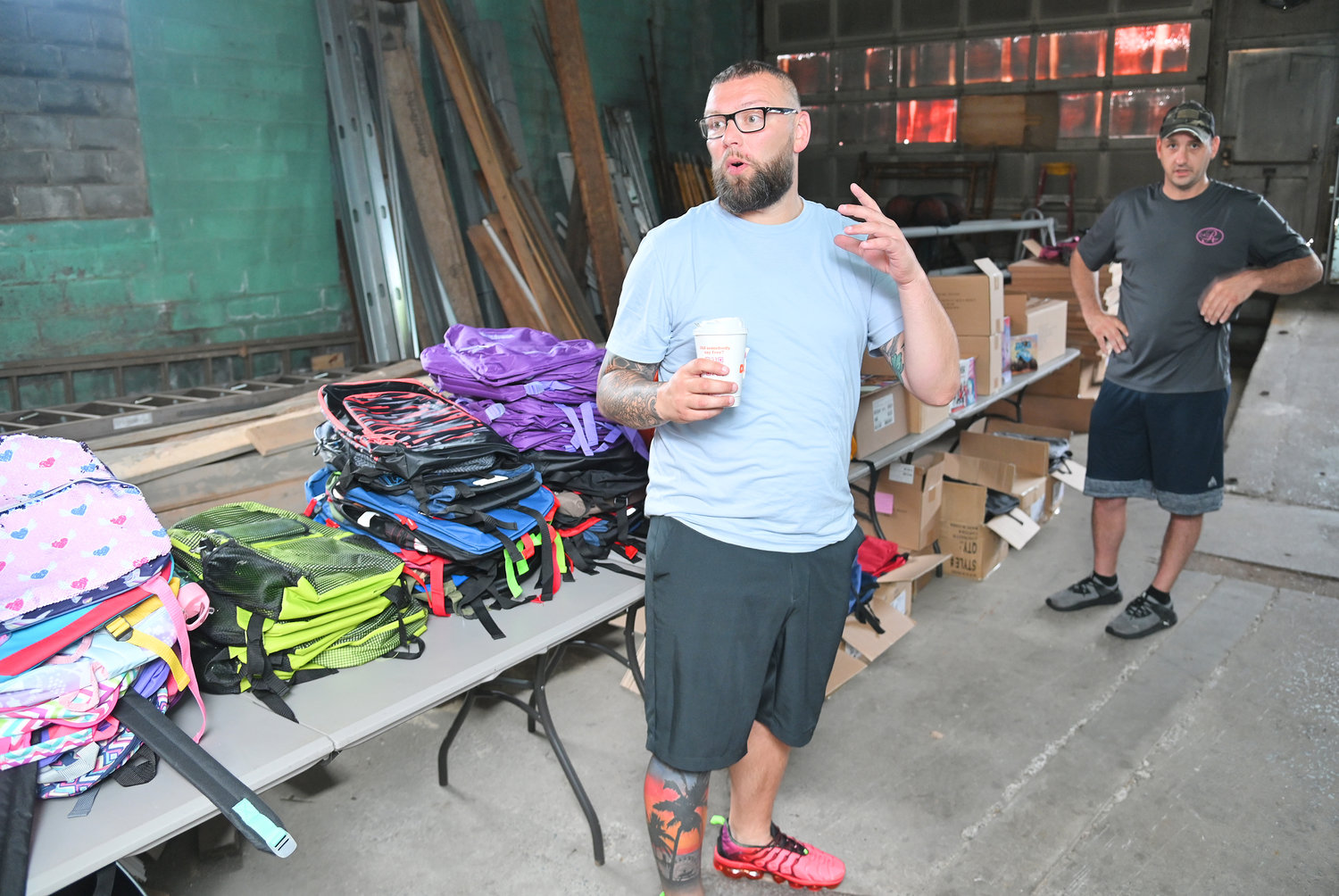 Bryan Brockway and Nazie Adolfi with just a few of the bookbags and school supply items that will be distributed later this month from Adolfi’s D&D Carpet.
(Sentinel photo by John Clifford) 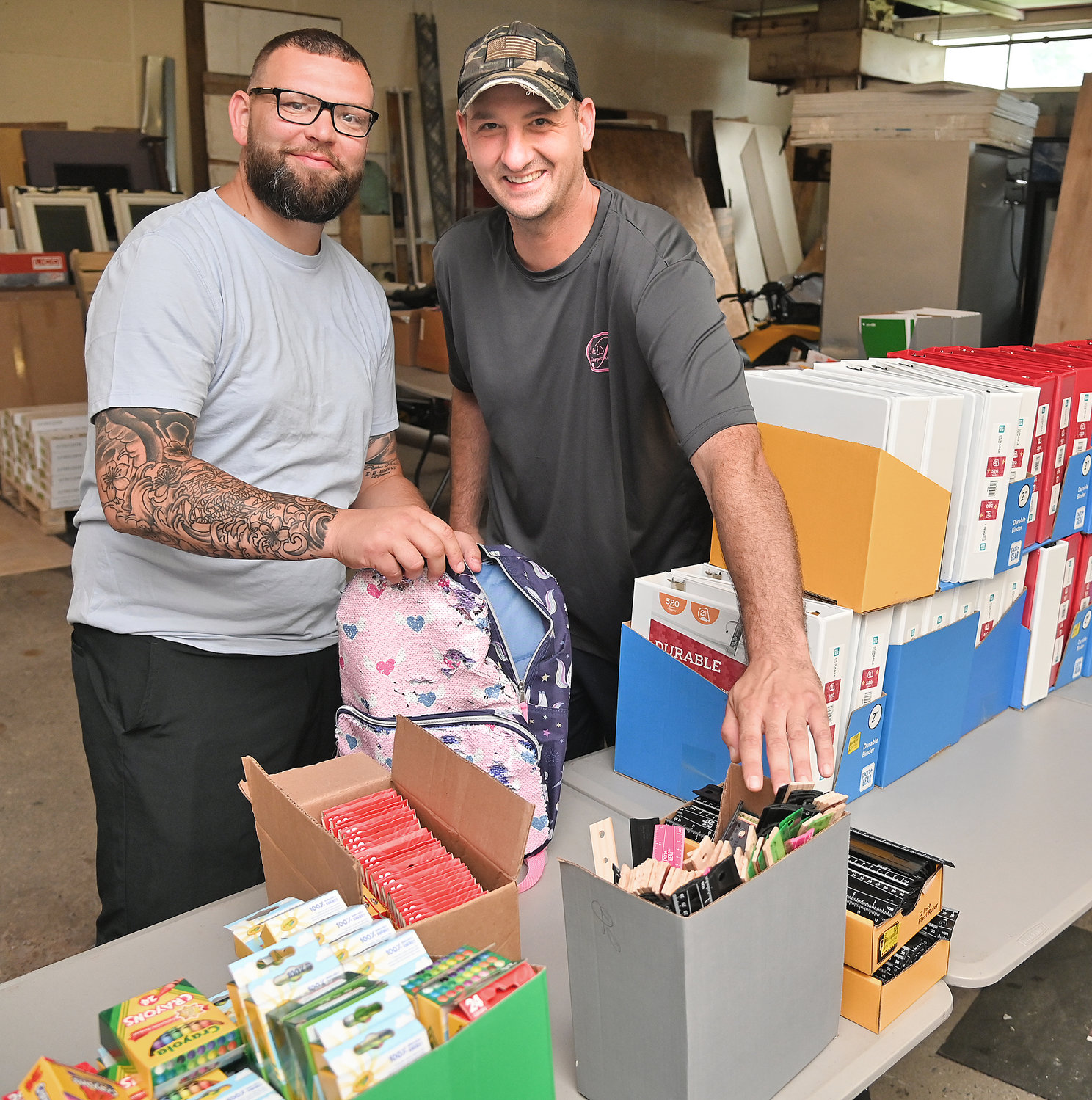 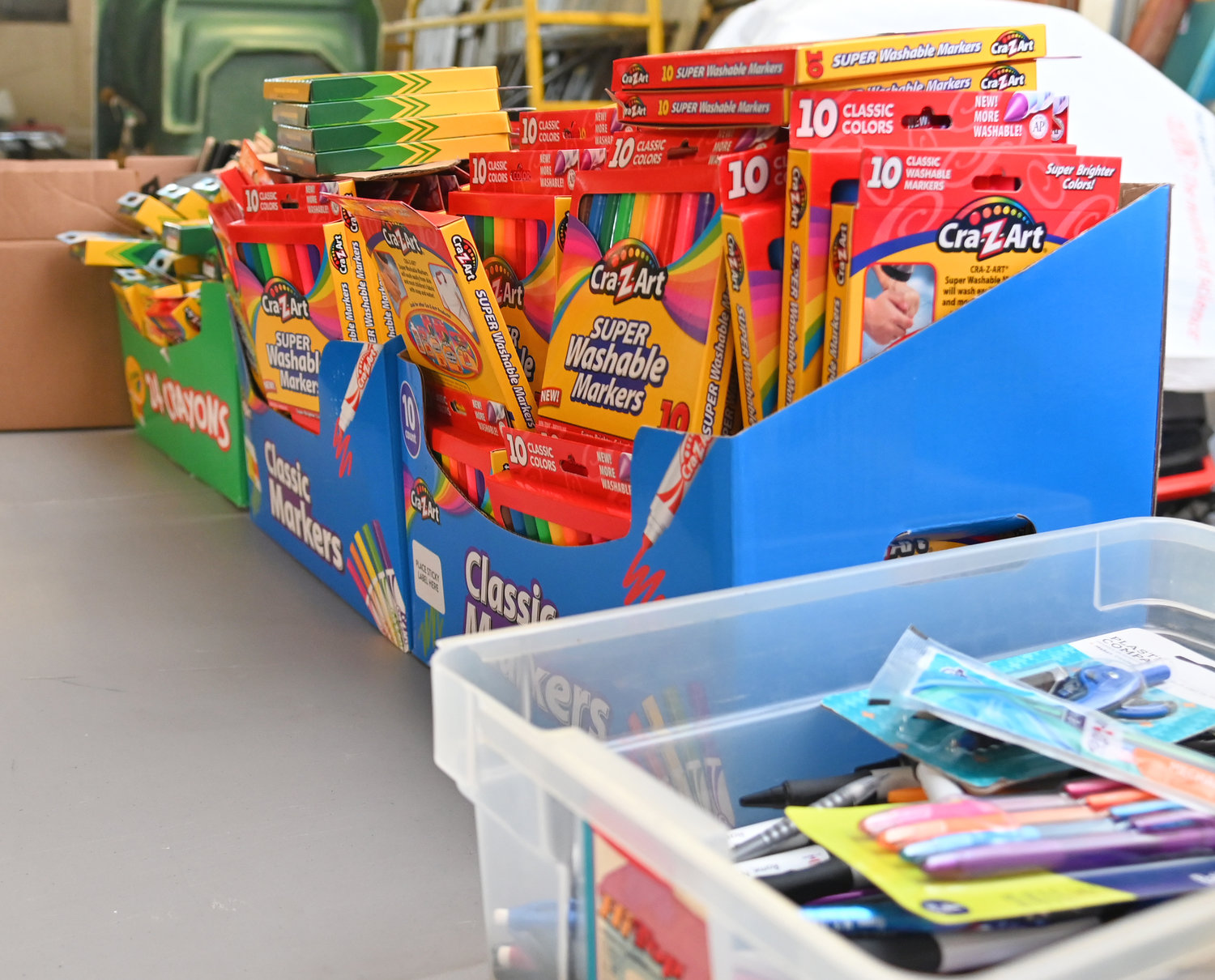 Crayons that will fill some of the bookbags that will be distributed later this month at D&D Carpet at 709 East Dominick St.
(Sentinel photo by John Clifford) 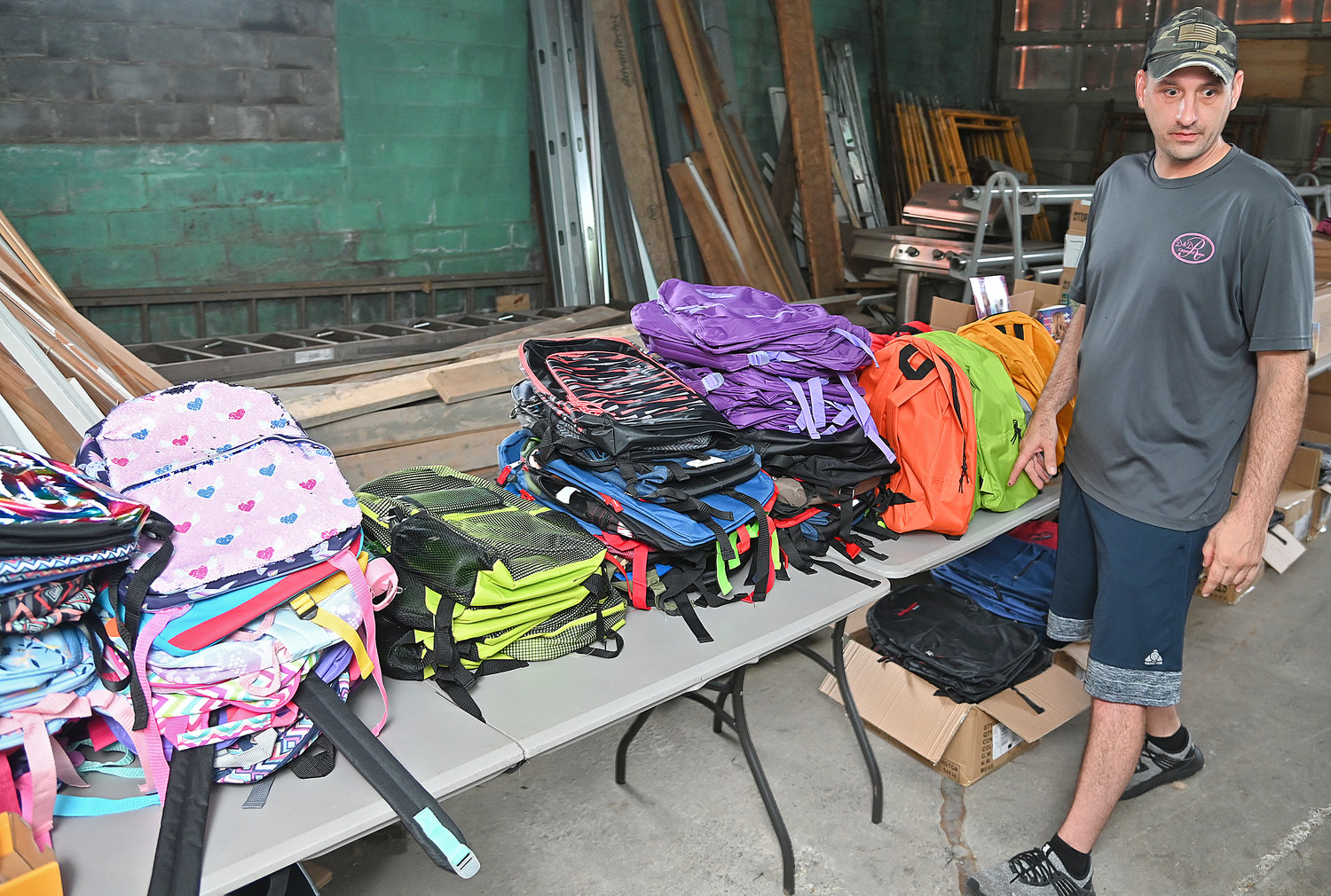 D&D Carpet owner Nazie Adolfi with just a few of the bookbags that will be given away later this month.
(Sentinel photo by John Clifford) 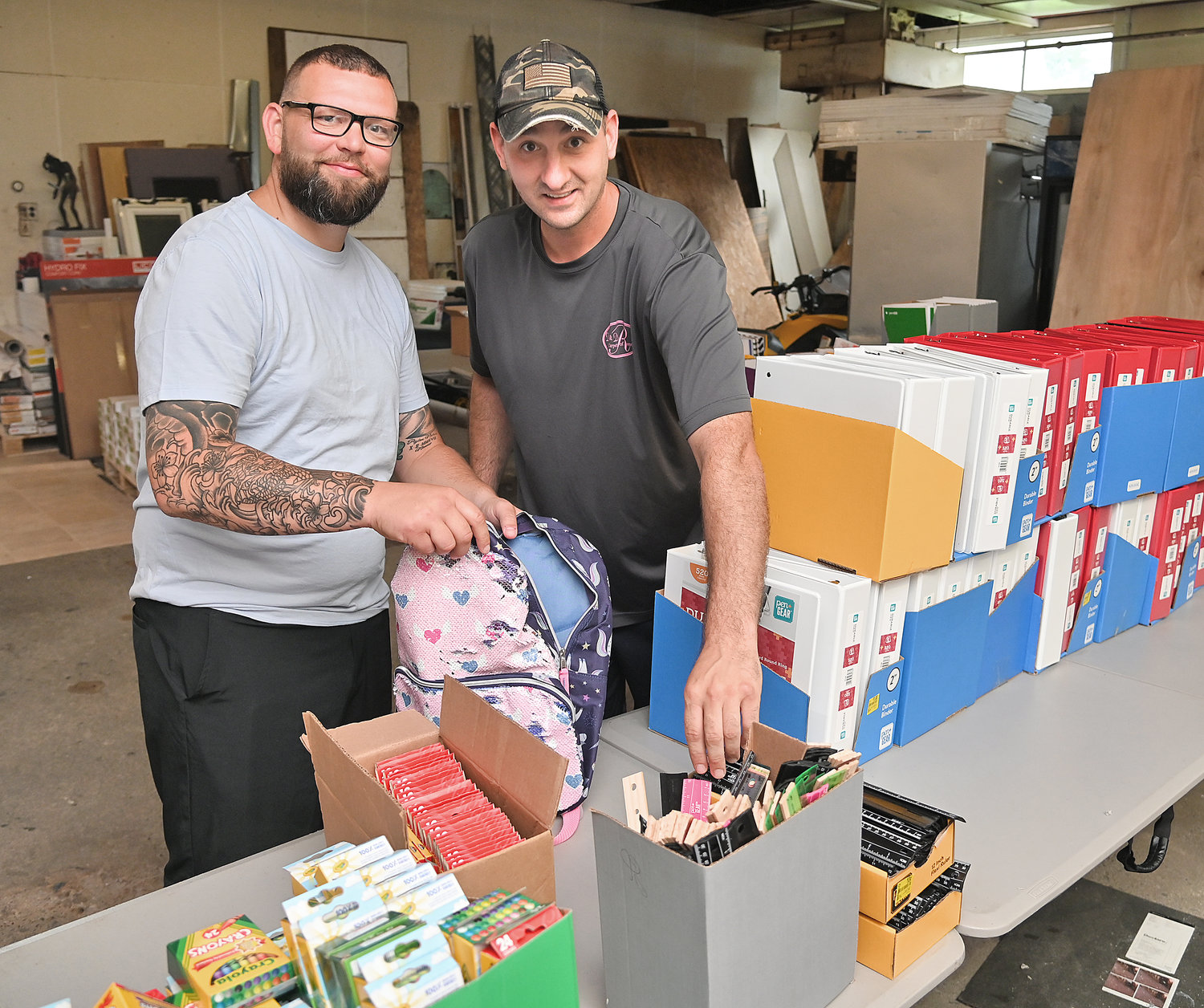 ROME — Students from kindergarten to college are welcome to the D&D Carpets of Rome Back-to-School Supply Giveaway.

On Saturday, Aug. 27, from 9 a.m. to 4 p.m., anyone going to school is welcome to a backpack filled with school supplies, from pencils and pens to binders and notebooks and everything in between, according to organizers of an annual giveaway that has grown exponentially to meet a growing need in the community.

It all started one day when Brockway was doing some shopping at Walmart and saw a situation he said he had to intervene in.

“There was a woman who couldn’t afford all the school supplies she needed for her children,” he said. “I helped pitch in [some money] and later called Adolfi. I told him this was a problem in the area, and we needed to do something.”

Adolfi was immediately on board, and with help from some friends, funds were raised, and supplies were purchased.

“We helped 50 children that first year,” Brockway said. “That second year was 75. And then the third year took off, and we had about 220 children.”

“And every year, it’s been more and more,” Adolfi added.

Last year, the duo managed to get school supplies out to 600 students. This year, they’re aiming for 700, a year where such efforts may be needed now more than ever. According to a recent Associated Press report, many parents are struggling to afford school supplies this year as inflation outpaces wages and makes purchases harder. Various school supplies have seen a price increase average of 15%. Backpacks alone have seen a 12% increase.

“And it’s not just Rome,” Adolfi said. “It’s all over. And we don’t care where they come from. We’ve seen people come from Rome, Camden, Utica, Waterville, Morrisville, Boonville, and more.”

“And last year, we saw some Syracuse children,” Brockway said.

And not only do the duo not care where they come from, they want to make it clear that this is for anyone trying to better themselves at school — from kindergarten to college.

“If you want to better yourself, you’re welcome to come,” Brockway said. “Obviously, the college kids aren’t going to need crayons. But last year, we did have a couple of college kids come to the giveaway. I mean, I’ve got a couple of friends going to nursing school, and these ladies are working full time, raising their kids, and trying to better themselves. So if they need a couple of three-ring binders and a backpack, come on down.”

In total, around $6,000 has been raised in donations, and people and organizations from all over have donated school supplies for the giveaway.

Those looking to help can still donate, and while they’re still collecting school supplies, Brockway said that monetary donations help more than anything, letting them purchase needed supplies and fill any needed gap. “If someone drops off 15 boxes of colored pencils, but we already have 300 colored pencils and need binders, that’s where that money can help,” Brockway said.

On Thursday, Aug. 25, starting at 5 p.m., Adolfi, Brockway, and volunteers will work as an assembly line, filling backpacks with school supplies needed.

Brockway laughed and nodded when asked if they could use volunteers to help — it’s a big job, after all.

“Stuffing 700 backpacks on a Thursday night in the middle of August is not ideal,” he said. “So the more volunteers we have, the better off we are... It’s a line of people, and it’s going to be huge this year.”

Brockway and Adolfi have been focused on ensuring everything will be ready for Aug. 27, but they want it known that this was not merely their effort.

The likes of Miner Realty and Property Management, Lake Delta Kiwanis Club, the Marco Carletta Fund, LeadCar Honda, the Bobby Page Foundation, Jervis Public Library, and Gary and Kortney Breen are some of those that have helped make the D&D Carpets of Rome Back-to-School Supply Giveaway possible.

Brockway gave a special shoutout to Adolfi’s mother, Terri Adolfi, who volunteers and does the inventory of all the school supplies and keeps a record of everything they have.

“Moreso than anything, we want to recognize the people and organizations that have helped us do this,” Brockway said.

This giveaway will be done as a drive-thru on a first-come-first-serve basis.