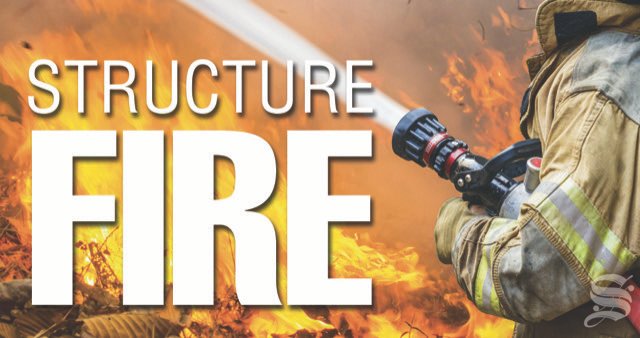 Two Lawrence Street residents in Rome escaped their home through a second-story window Monday evening after a fire started downstairs, according to the Rome Fire Department.

No one was injured and firefighters quickly knocked down the flames at 110 Lawrence St., said Deputy Fire Chief Timothy W. Reilly.

“The occupants woke to smoke in their apartment,” Reilly explained.

Both residents climbed out a window onto the roof of their porch. One resident jumped to the ground and called 9-1-1, reporting the fire at 6:22 p.m. Reilly said the other resident waited on the porch roof until firefighters arrived with a ladder.

Reilly said the fire started in the doorway to the basement on the first-floor. Responding firefighters entered the home and quickly knocked down the flames, the chief stated.

“Luckily, we met with success,” Reilly said. “The firefighters did a very good job.”

The chief said two dogs were also saved from the second floor. Reilly said the animals had retreated to a back bedroom, and the fire never reached the second floor. He added that there was smoke throughout the residence.

Reilly warned that there were several problems inside the home during the firefight. Reilly said the building did not have working smoke detectors, and there was too much clutter blocking the basement doorway. Reilly said firefighters had to move some of the clutter in order to fully douse the flames.

The chief said this was the second house fire in a week where there were no working smoke detectors and doorways in the home were blocked. Fire officials said there were no smoke detectors in the North James Street house fire that killed a woman early Saturday morning. Officials said one of the two exits from the home was also blocked by items inside.

Reilly said both are a major danger in the event of a house fire. He advised residents to keep their doorways clear and to make sure they have working smoke detectors throughout their homes.