Arthur Hutchinson was as antsy as anyone to see the scaffolding above 63 Genesee St. come down on Saturday. 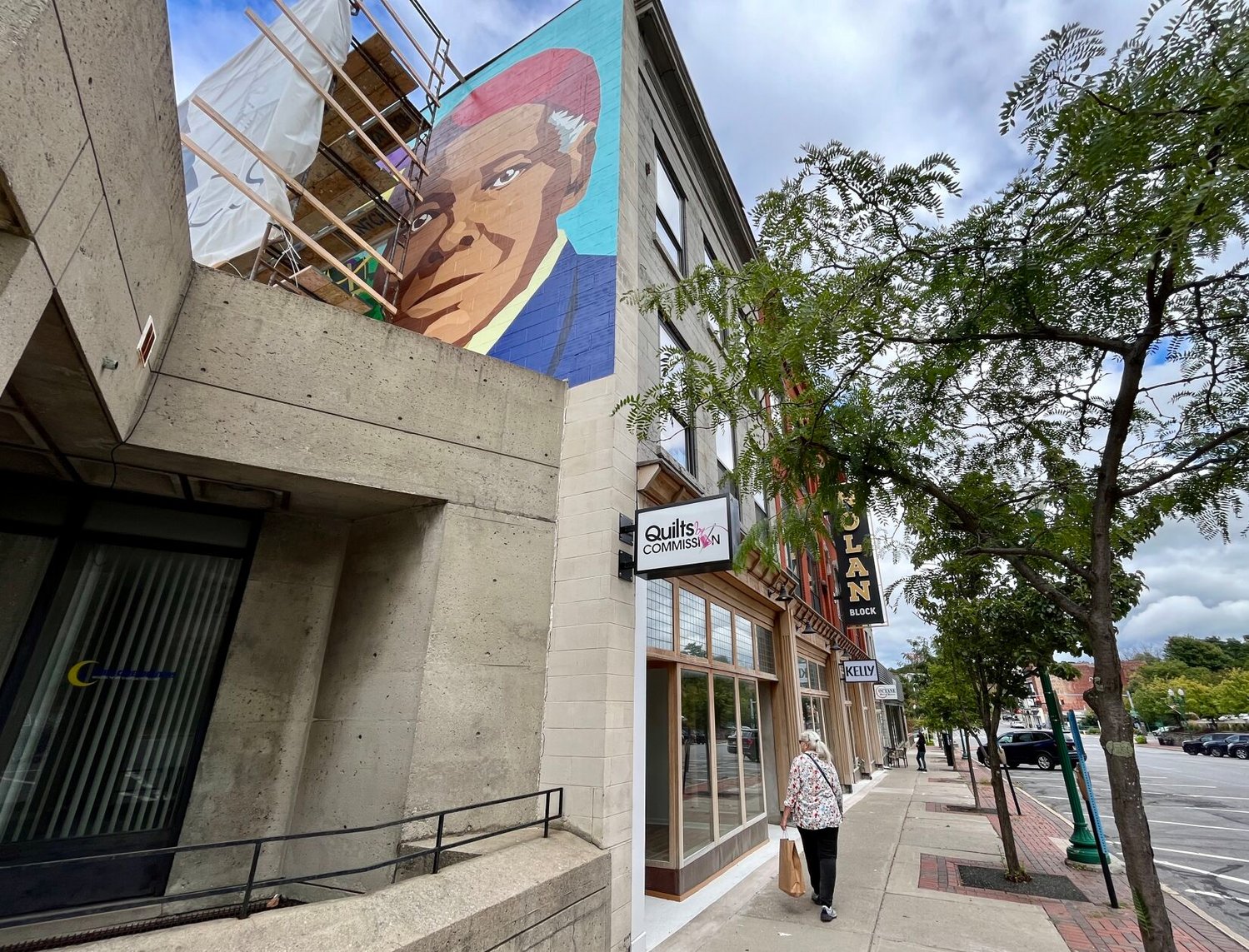 A mural of Harriet Tubman and her life peeks out from behind scaffolding above the concrete building at 63 Genesee St. in Auburn. The mural was unveiled on Saturday, Sept. 24, with hopes to help educate and inspire viewers.
(AP Photo/The (Auburn) Citizen)
Posted Thursday, September 29, 2022 1:00 am
David Wilcox, The (Auburn) Citizen

AUBURN — Arthur Hutchinson was as antsy as anyone to see the scaffolding above 63 Genesee St. come down on Saturday.

Behind that scaffolding was “Harriet Tubman: Her Life in Freedom,” a 61-by-26-foot mural designed by Hutchinson. It was unveiled Saturday with a ribbon-cutting that was attended by seven descendants of the legendary abolitionist, as well as several local officials.

A reception at the New York State Equal Rights Heritage Center, with postcards of the mural, food, music and more followed the historic unveiling.

The mural cost $40,000, and was funded by the Harriet Tubman Boosters. The group collected donations from more than 300 individual donors from 13 U.S. states and Canada, whose names are listed at tubmanmural.org. It also collected a $8,475 grant from the Cayuga Community Foundation. The mural was installed by A&M Graphics, of Auburn, on the wall facing Genesee and North streets.

The wall belongs to the Nolan Block, whose owners, the Kyle family, partnered with the Boosters on the mural. Seeking a tribute to Tubman that’s modern and bright, and focused on her life in Auburn, the group issued a call for artists. Hutchinson was selected because his design did just that, depicting her and seven scenes from her life after leading hundreds to freedom on the Underground Railroad.

The scenes show Tubman commanding the Combahee River raid in South Carolina during the Civil War, serving as a nurse during the war, the Thompson Memorial African Methodist Episcopal Zion Church where her funeral was held, her brick residence in Auburn, the apple orchard there, the Home for Aged and Indigent Negroes she founded, and her participation in the women’s suffrage movement.

Hutchinson told The Citizen he drew inspiration for the mural from medieval tapestries that tell life stories in a single image. He sketched it on a sheet of notebook paper, and created the final design digitally. When A&M began installing the mural last month, however, he was surprised to see it lost none of its vibrancy. It looks even better than his renderings showing the mural on the wall, he said.

“It’s remarkable how accurate it is. It looks exactly how it did when I designed it. I’m so happy with how it turned out,” he said.

The Kyle family will donate lighting to illuminate the mural at night, the Boosters said in a news release. The group also plans to install an informational marker with details of the scenes, and is raising funds for that and maintenance of the mural. It’s one of the largest of Tubman, the group said, and the only one dedicated to her fight for human rights after securing her freedom and settling in Auburn.

The fact Hutchinson is also a Black resident of Auburn makes the mural all the more fitting, the group added.

For the artist, however, the mural is all about its subject. Hutchinson hopes people who see it, whether they’re new to Auburn or not, are inspired to learn more about the icon who called the city home.

“Making art for me has always been personal, but it’s great to do the thing I love and have an impact beyond myself,” he said. “I hope it has an even bigger impact than I intended.”