‘Top guns’ training in — and above — area

His call sign is “Big E,” short for “Big Earl,” and how he got that name is classified.

‘Top guns’ training in — and above — area 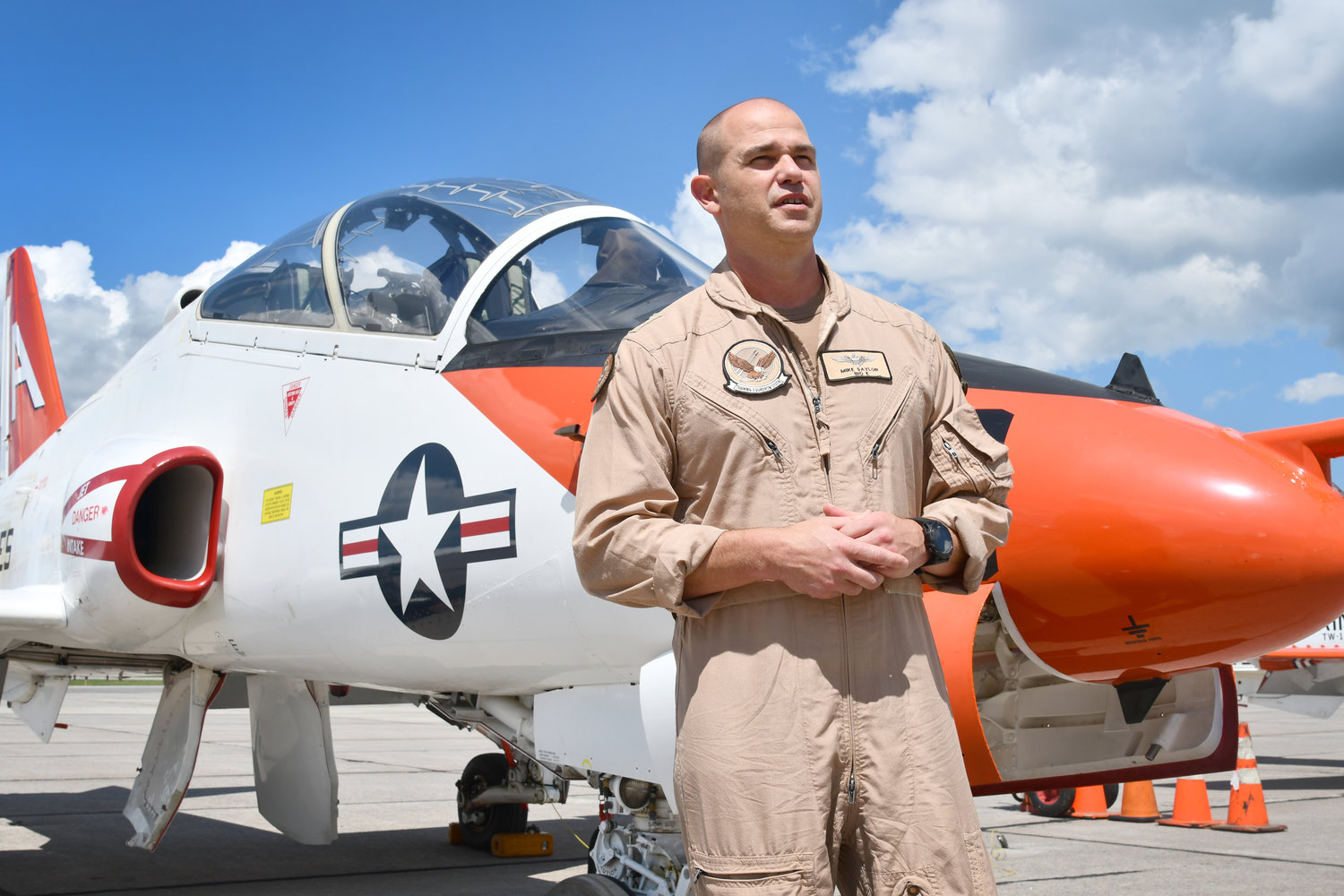 Training Squadron SEVEN Commander Mike Saylor stands in front of a T-45 aircraft at the Griffiss International Airport on Thursday. The mission of the VT-7 Eagles is to safely and effectively train the world’s finest Naval Aviators. The squadron is currently undergoing ground training at Griffiss. 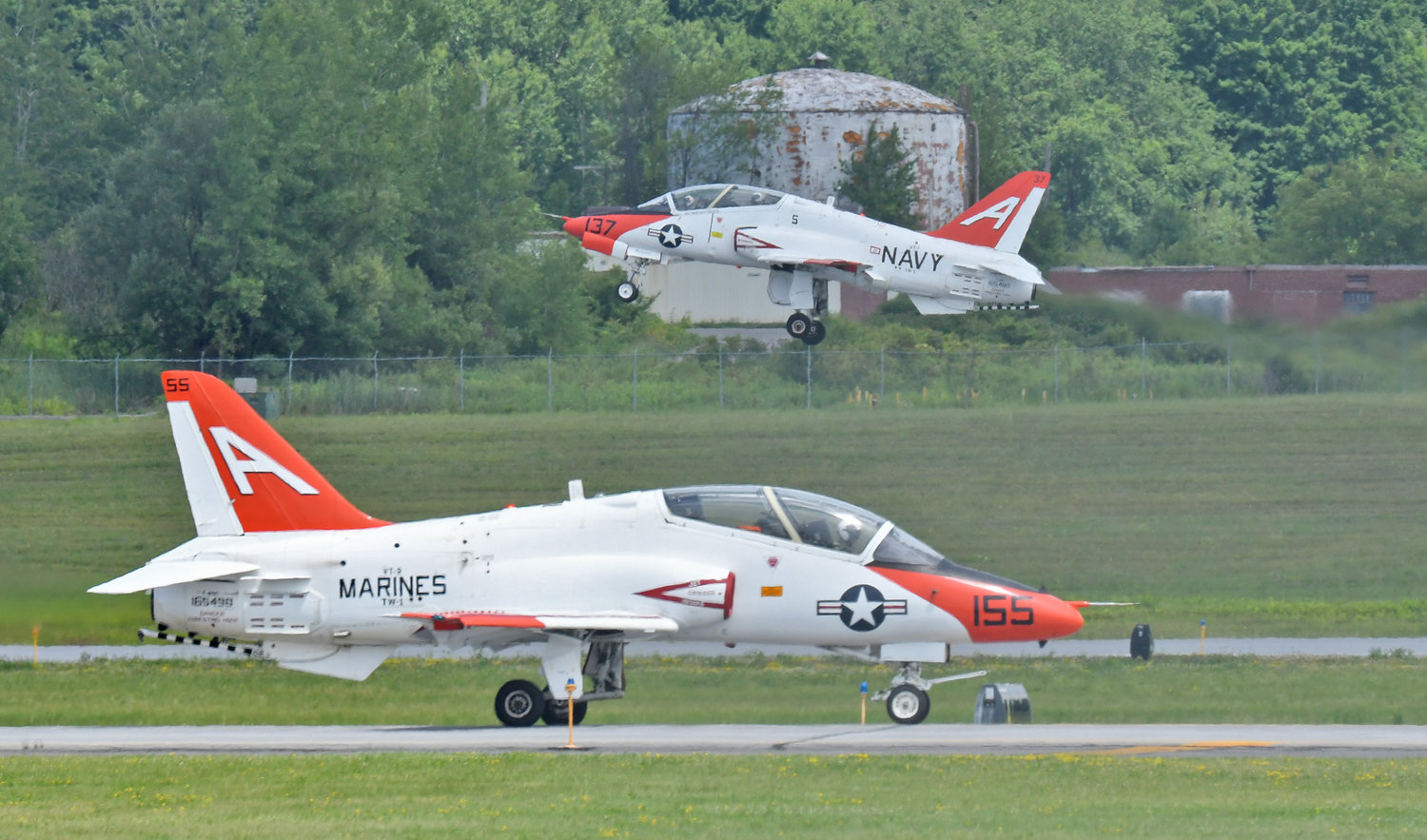 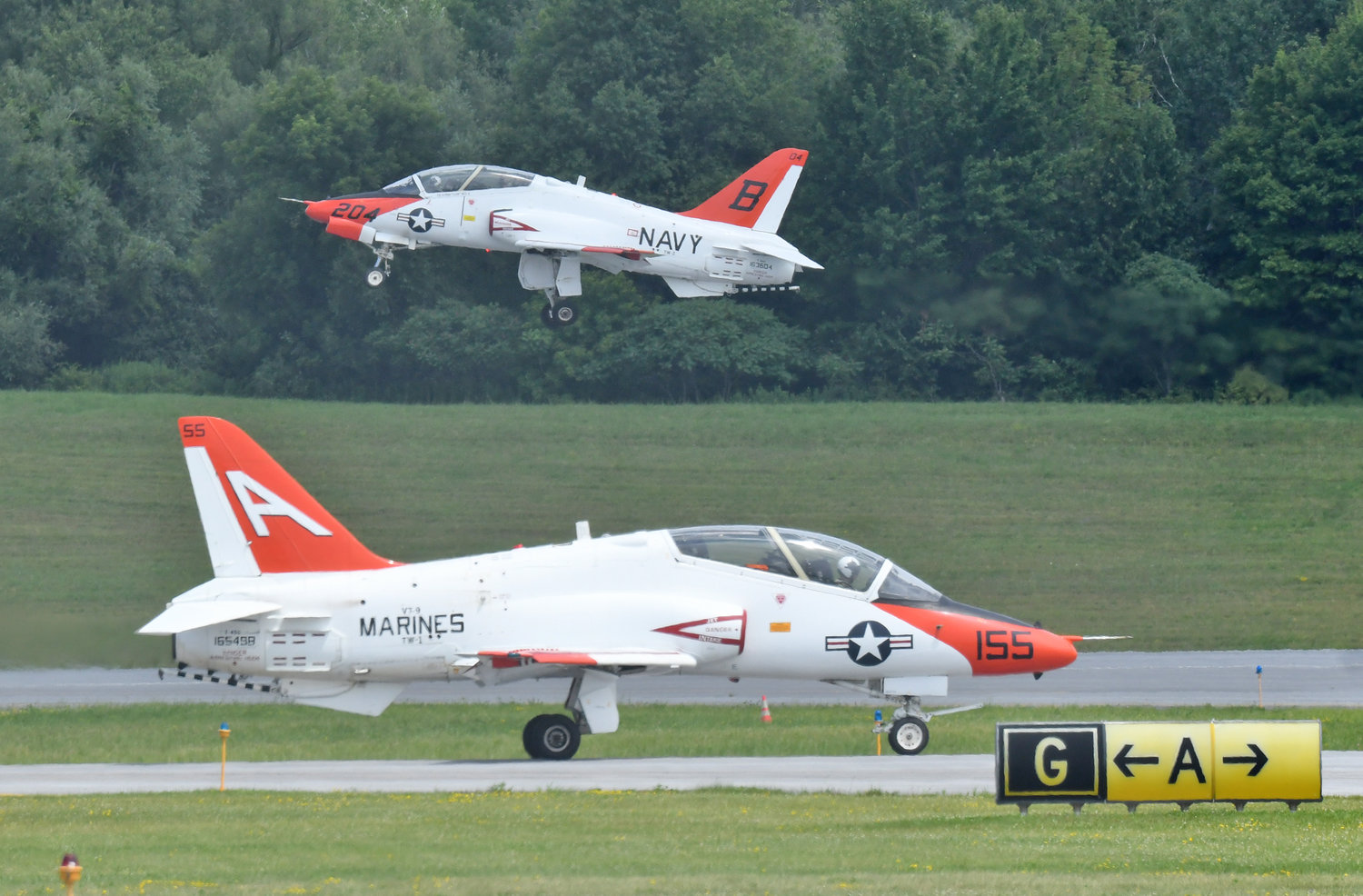 ROME — His call sign is “Big E,” short for “Big Earl,” and how he got that name is classified.

Formally known as Michael Saylor, he is commander of the U.S. Navy’s Training Squadron SEVEN based in Meridian, Mississippi. Thanks to the popular feature film, “Top Gun: Maverick,” now in theaters, most have heard the designation of Top Gun Navy fighter pilot.

Those pilots made famous by the movie and the original also starring Tom Cruise back in 1986, are currently undergoing real training at Million Air, headquartered at Griffiss International Airport on Hangar Road.

The “Eagles” of Training Squadron SEVEN (VT-7) have the mission of safely and effectively training the world’s finest Naval Aviators and preparing them for service and success in the fleet, according to the squadron’s website. Student Naval Aviators train for approximately 12 months in the fundamentals of strike aviation.

In Rome, Navy aviators were undergoing target area mechanics training in their Northrop T-45 Goshawks, minus the ammunition.

The T-45 is a trainer for the Navy/Marine Corps flight school before they advance to the ranks of Hornets, Super Hornets, Harriers, Growlers and F-35s.

Because “target area mechanics” is something being added to the training syllabus for fighter pilots, instructors were in Rome learning for themselves before maneuvers are taught to aviators in training.

Top Gun made famous call signs like Maverick, Goose and Viper, so Saylor was asked how it is pilots earn a call sign like, “Big E.”

“Typically in the Navy, your call sign is from some idiocracy in your career, or at some point in time, that identifies with the individual from some event in their life,” Commander Saylor explained. “There’s even a Call Sign Review Board” that makes the final decision on the “sign.”

Training for the next generation of Navy fighter pilots is quite “arduous,” Saylor explained, adding that only the top 1% of aviators move on, depending on their platform.

After initial training, pilots head to one of the Fleet Replacement Squadrons (FRS) to go to school on their platform, whether it be single or tandem. The Navy tends to have two main bases for each platform, one on each coast.

Saylor said only 1 to 2 students have the grades and aptitude in order to go on and fly a fighter aircraft. Basic training begins post college, so pilots typically start out at around age 22. “Median training age” is around 25,” he said.

“What we have for students is basically the top 1% of Naval aviators; they have climbed the ranks and proved themselves in a field full of experienced pilots,” said Commander Saylor. “They have shown top-tier proficiency and aptitude. They have a rigorous decision-making matrix, they are competitive, they are capable of muti-tasking, and they can quickly take in information and return it in the form of a solution” in the air. “The intent of this is to potentially save someone’s life.”

Pilots undergo extensive ground-based training and roll simulation and eventually air space emergency scenarios simulations for about six weeks before they even enter a cockpit.

Although training is strenuous and extensive, aviators “are all Type A personalities, and are all motivated to succeed,” Saylor said. “The pilots are held to an extremely high standard to ensure that only the best can rise to the top.”

And like Air Force pilots, depending on their platform, Navy pilots can also work toward piloting spacecraft.

“I have two friends who were my squadron mates in Virginia Beach who were picked up by NASA,” Saylor said. “But it’s a highly-competitive program.”

In fact, while there’s some “competition” between Air Force and Navy pilots, the commander said the two military branches often combine efforts for training.

“We want our fighter pilots to speak the same language — we have a symbiotic relationship,” Saylor said. “In fact, I did my initial training with the Air Force. And yes, we have a little competition, but that helps keep our fighting edge.”

What makes Navy pilots stand out, however, is that the top pilots have the specialized skills of being able to take off from and land on an aircraft carrier, the commander explained. The Navy often serves as the nation’s Rapid Response Team due to their capability for carrier aviation.

While pilots are currently working on target area mechanics in Rome — trying to get bombs on target and on time — Saylor reflected on the continuous evolution of technology and how pilots and their instructors must adapt.

“We have to adapt to our new technologies constantly. The changes sometimes come quarterly and sometimes even monthly,” he said. “There are tons of things that regularly change, and we have to get used to them. It is important to remember that our potential threats are also developing new technologies. We have to be more prepared than them.”

And going back to how fighter pilots have been “Hollywoodized” from the Top Gun movies, Commander Saylor said the latest film actually took a snippet from pilots’ actual training. Saylor even knew some pilots who were involved in the flight scenes in the film.

Having only about 1,000 aviators in the fighter jet community, “You either knew a guy or knew a guy who knew a guy who was in one of the flight scenes in the movie,” Saylor laughed, adding that some very skilled women are also part of the program.

In some scenes, “You got to see inside a cockpit for the first time,” he said. “Almost all the flying scenes are legitimate, and they were done with cameras right in the cockpit. It was very realistic in regards for flying.”

Saylor concluded by saying he was appreciative of Aviation Commissioner Ed Arcuri and Steve Ingerick, general manager for Million Air, who if not for them, training would not have been possible.  He also commended the Rome facility.