A Boeing 737 from Brazil can still fly Tuesday at Stratton Aviation in Rome but soon the engines will be dropped from the plane and the harvesting of vital parts will begin.
(Sentinel photo by John Clifford) 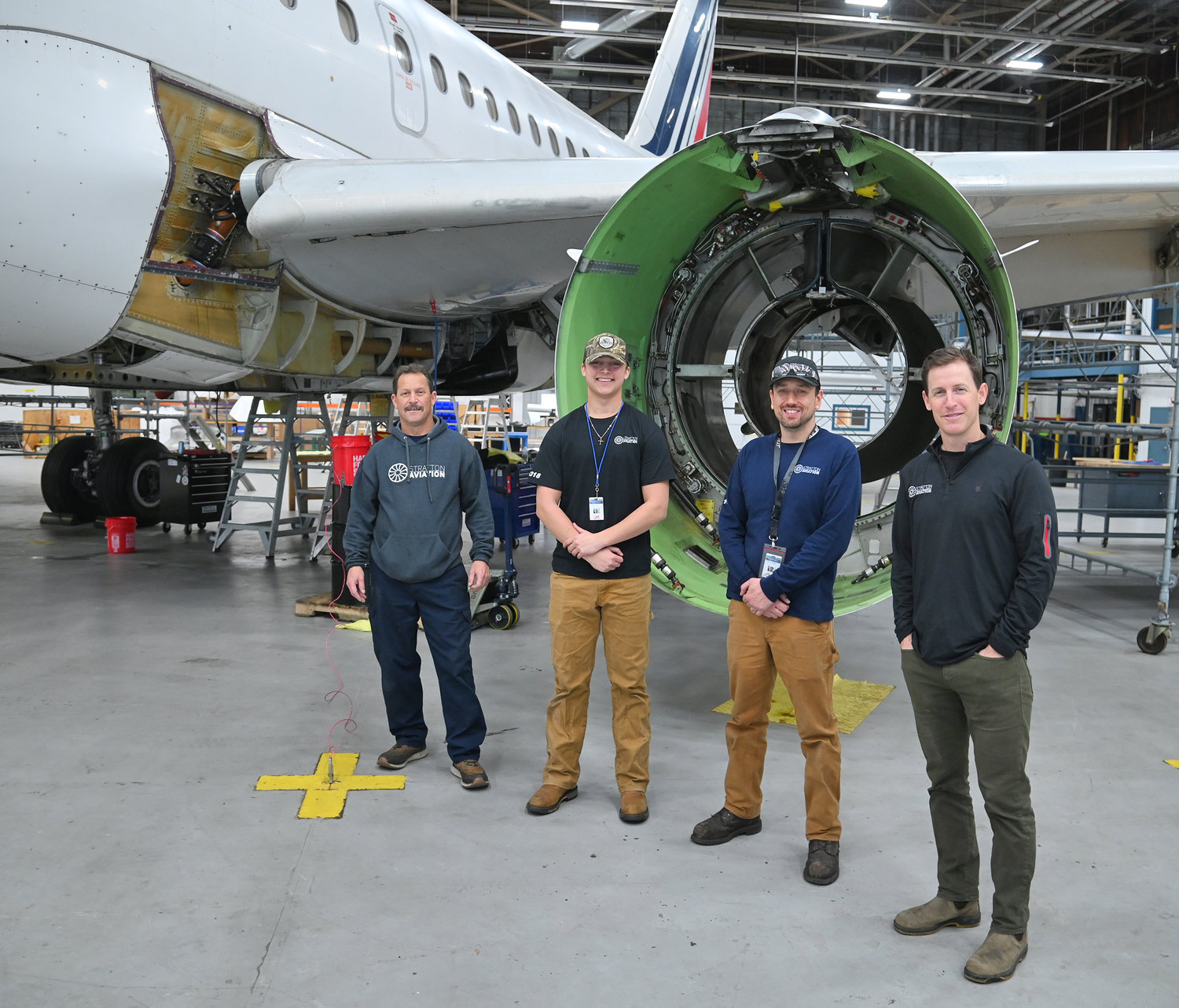 Stratton Aviation team members, from left, Ken Crowley, Ryan Metera, Aaron Stocking and Hunter Thayer pose Tuesday in front of an Air France Airbus A318 that they have already dropped the engines from to ship to their customer.
(Sentinel photos by John Clifford) 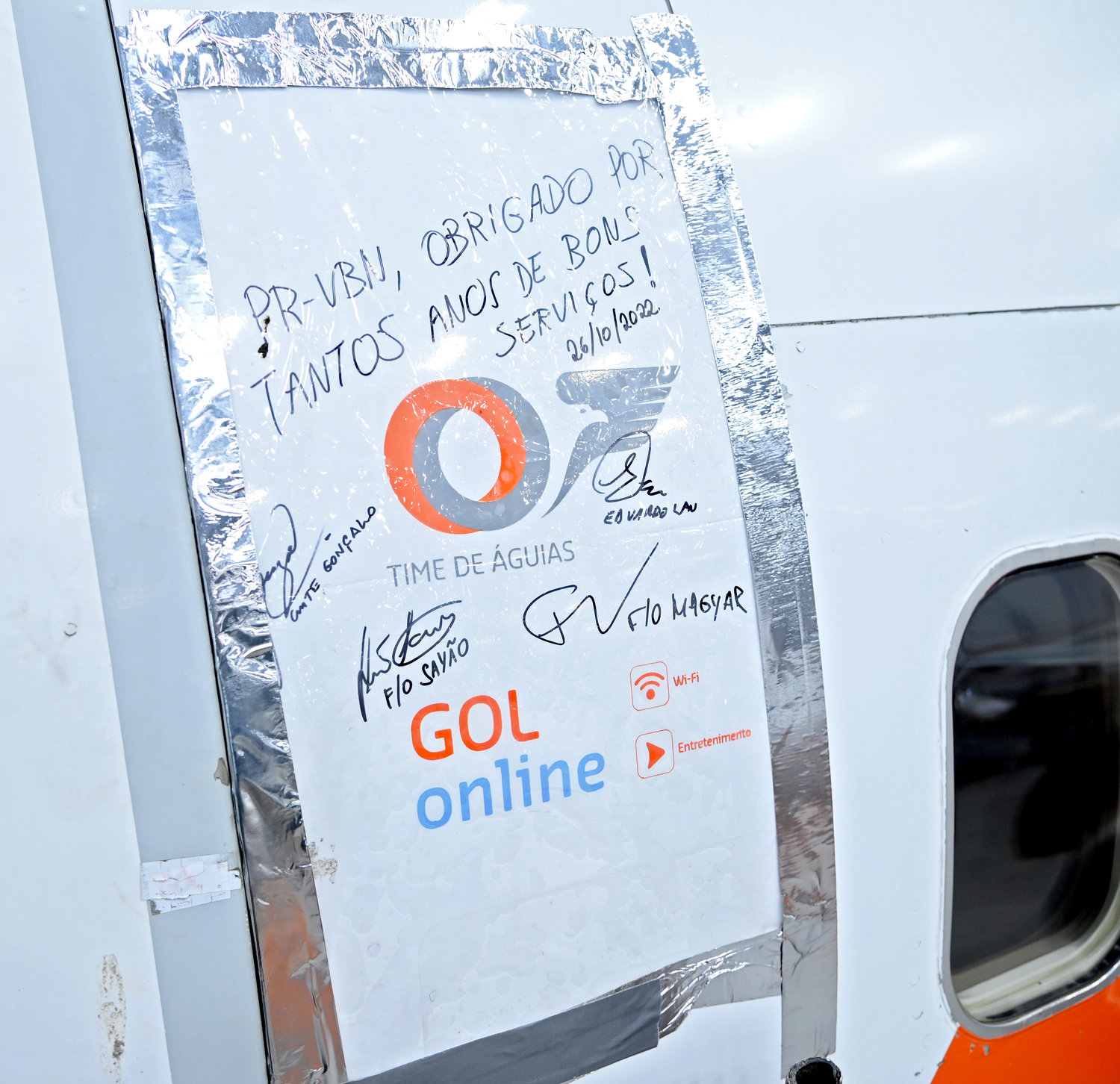 The pilots and crew that stepped off a Boeing 737 from Brazil wrote on the side of the plane their thanks for the reliable service throughout the years and then each one of the four signed it.
(Sentinel photo by John Clifford) 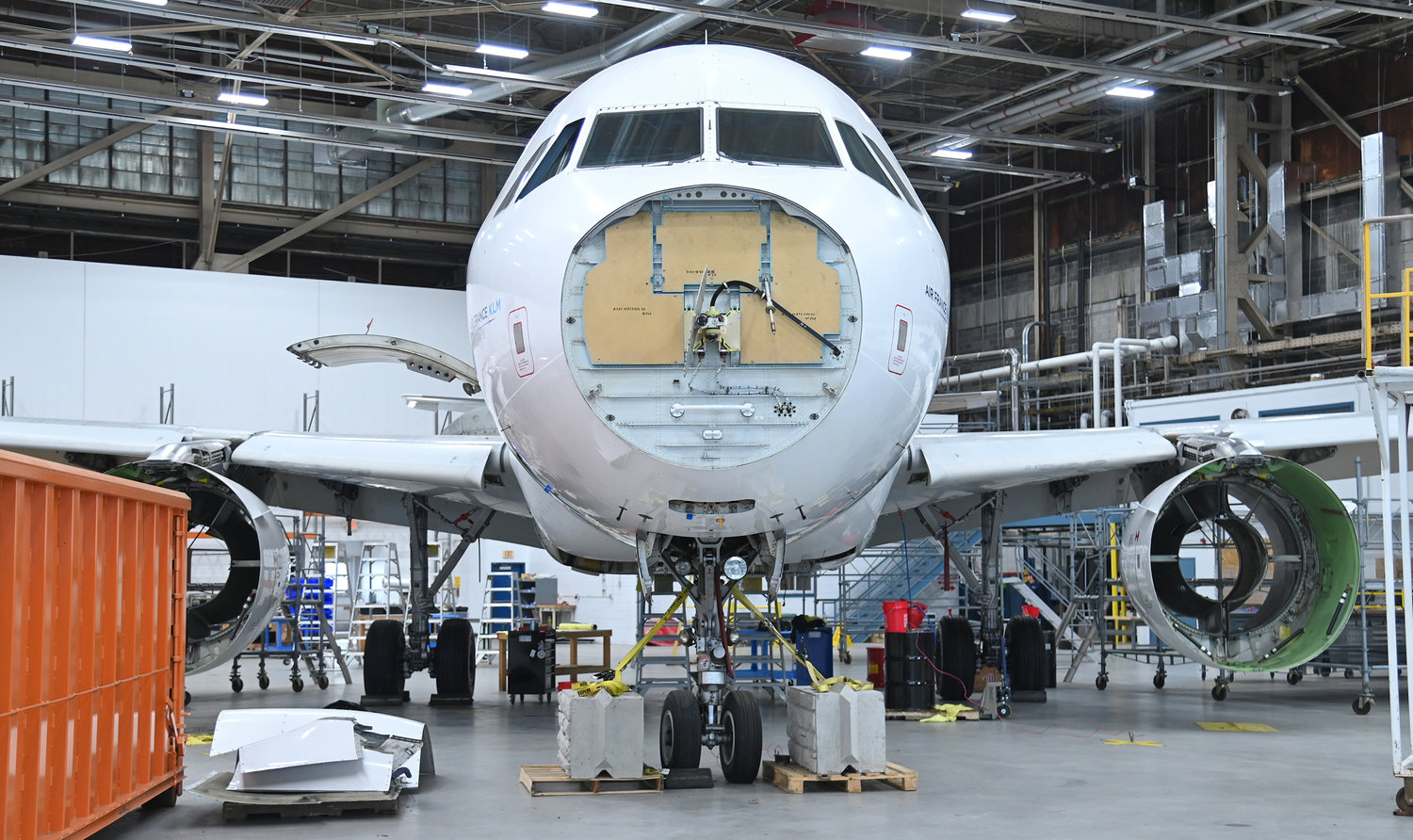 An Air France Airbus A318 has already seen the engines removed and shipped to the customer Tuesday at Stratton Aviation in Rome. The useful equipment is being harvested from the plane and eventually most of the plane will be recycled.
(Sentinel photo by John Clifford)
Previous Next
Posted Saturday, November 26, 2022 11:00 am

ROME — The Air France Airbus currently in the process of dismantling in the hangar of Stratton Aviation might be at the end of its flying life, but it still has a lot of value in the aircraft parts market.

“It will never fly again, but there are still 1,200 parts on that aircraft with a solid retail value,” said Hunter Thayer, chief operating officer at Stratton Aviation, 592 Hangar Road, explaining the company’s primary focus is buying and selling used aircraft parts.

Buying new aircraft parts in today’s market can be challenging, Thayer noted. Stratton Aviation offers an alternative — much like buying used parts for the family car or truck. Every single harvested part has maintenance documentation and is tested, Thayer said.

Every aircraft has a schedule of maintenance over its life, and when the maintenance gets more expensive than the aircraft is worth, it is retired from making flights. That’s when the technicians of Stratton Aviation take over, removing parts like the auxiliary power unit, landing gear, hydraulics, and even dropping the engines to repurpose their parts.

“Even after the engine has run its course, there is still some life left in it,” Thayer said.

A Boeing 737-700 from Brazil is also currently in the hangar. Next to the door, its pilot and crew had written and signed a note, in their native language giving their thanks for the plane’s service over the years.

Thayer said the technicians will be removing that sentimental keepsake and returning it.

Stratton Aviation came to Rome in early spring 2022. There are now eight employees at its local facility, with hundreds of aircraft takedowns between them. One of them alone boasts more than 100, and another tops 80, Thayer said.

“We look forward to working hand-in-hand with the county and airport commission on our future growth plans, Thayer said.

Thayer said they also want to add an FAA repair center to actually do the maintenance work on aircraft as well as teardowns.

They will be looking for licensed A&P mechanics, plus personnel to work in areas like shipping and receiving. They have an immediate need for 15 new workers, with many more openings coming in the new year.

“For anyone who is interested in getting into aviation teardown, this is a great place to start,” Thayer said.

They hope to have 100 employees in Rome by next year, he added. Thayer said they have had much success hiring graduates of Mohawk Valley Community College’s aviation programs, which are located nearby their own facility at the airport. They hope to continue that tradition of hiring local workers.

“We view ourselves as part of the life cycle of aircraft parts,” he explained. “There is a lot to be said for harvesting as much as we can and recycling those parts.”

The company is a global component service provider to the commercial aviation market, with its headquarters in Burlington, Vermont.