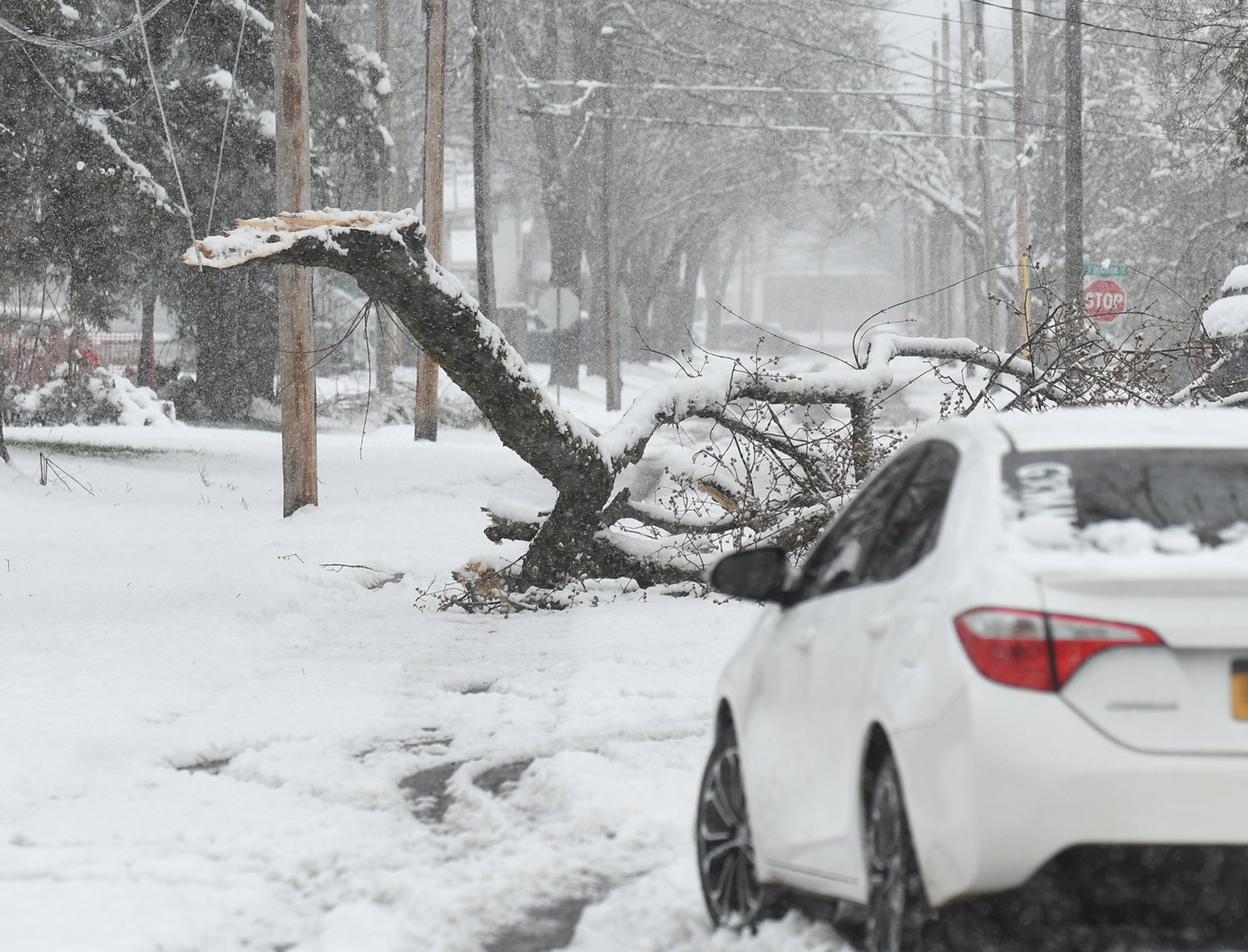 CRASHING DOWN — Several inches of wet, heavy snow downed tree limbs and power lines across the region Tuesday morning. Here, a resident in the 800 block of Calvert Street in Rome pulls out of their driveway to find the roadway blocked off. Crews from across the region were out in force trying to clear streets while National Grid workers were out repairing lines and restoring power.
(Sentinel photo by John Clifford) 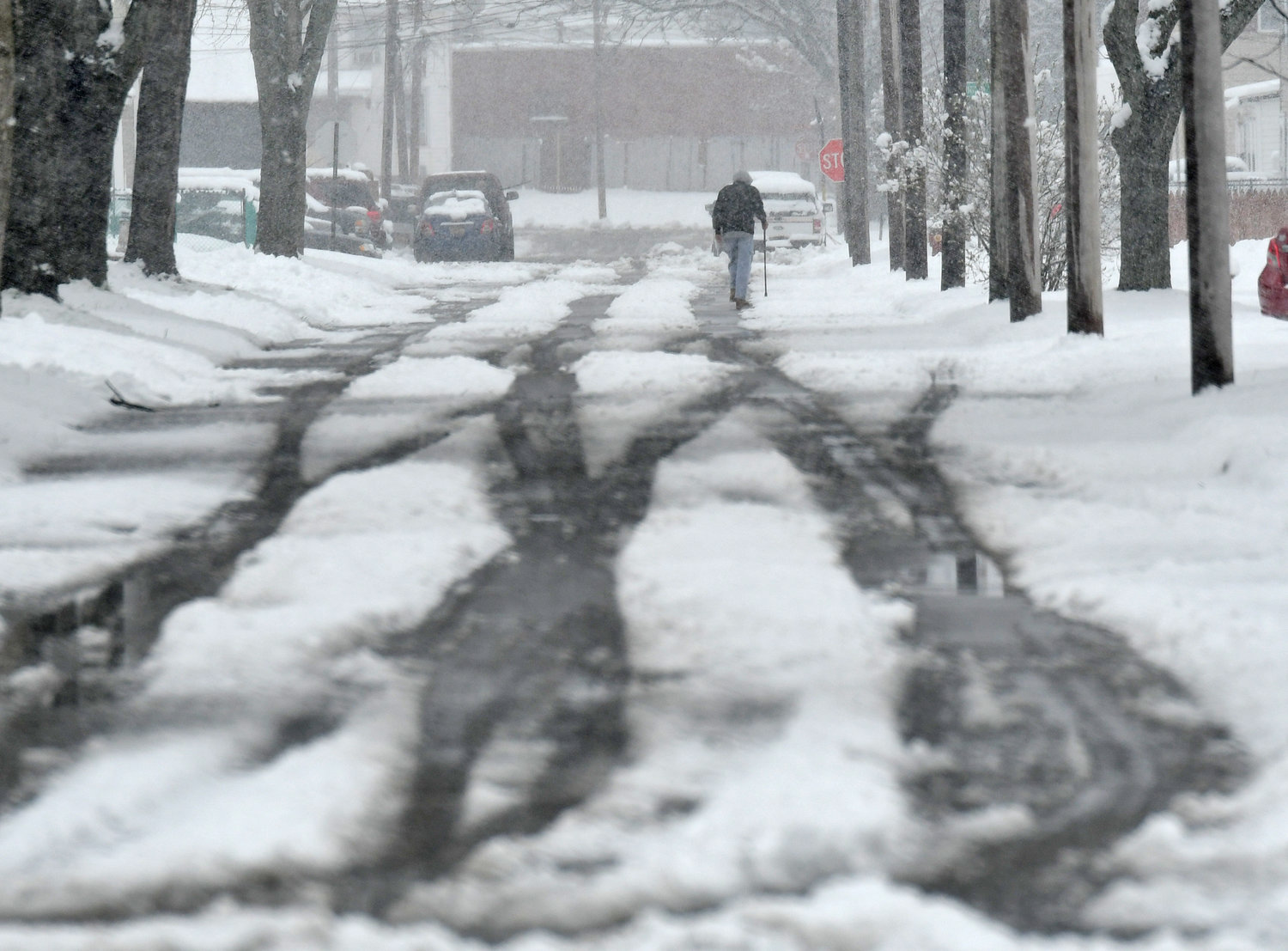 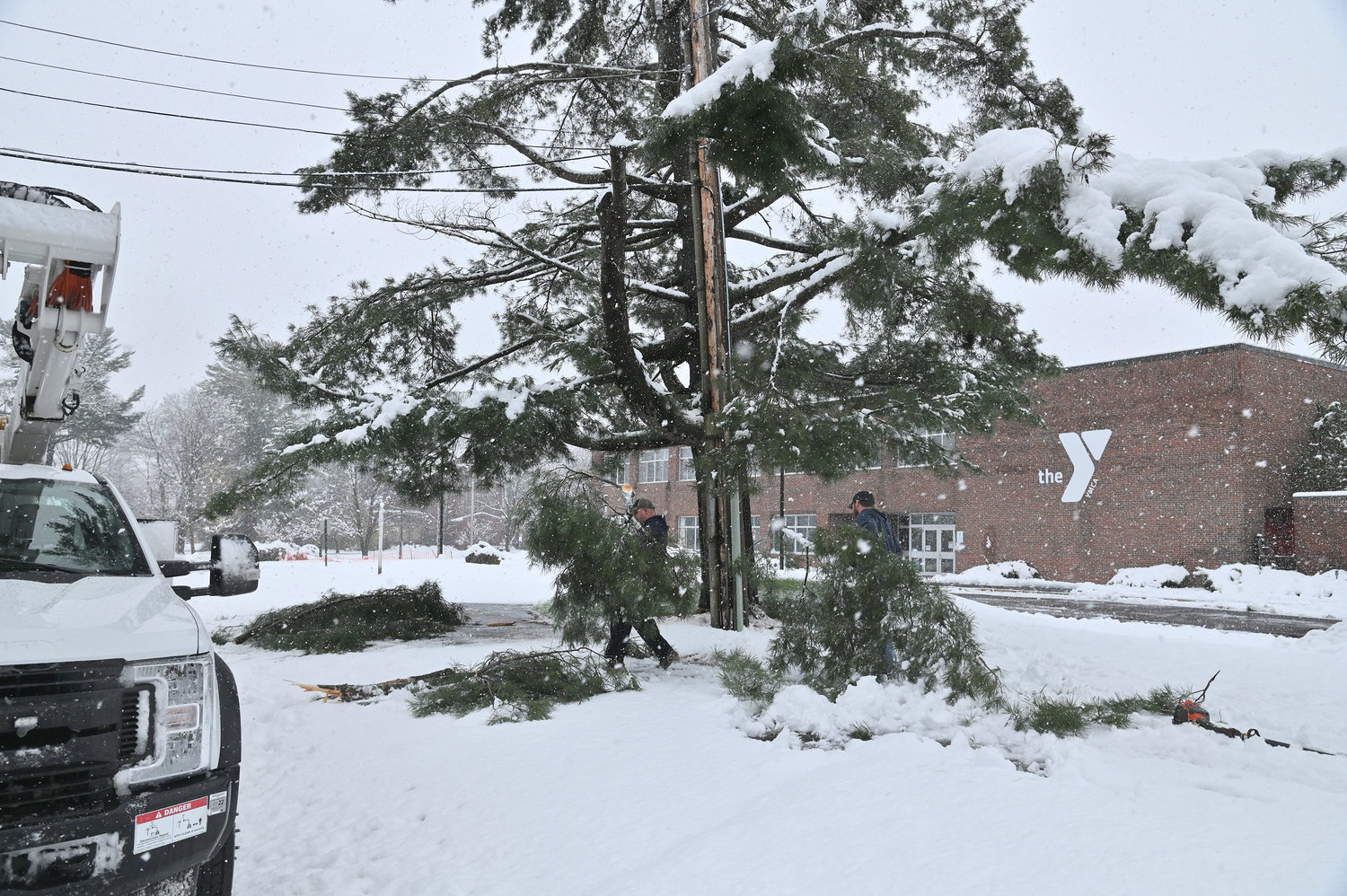 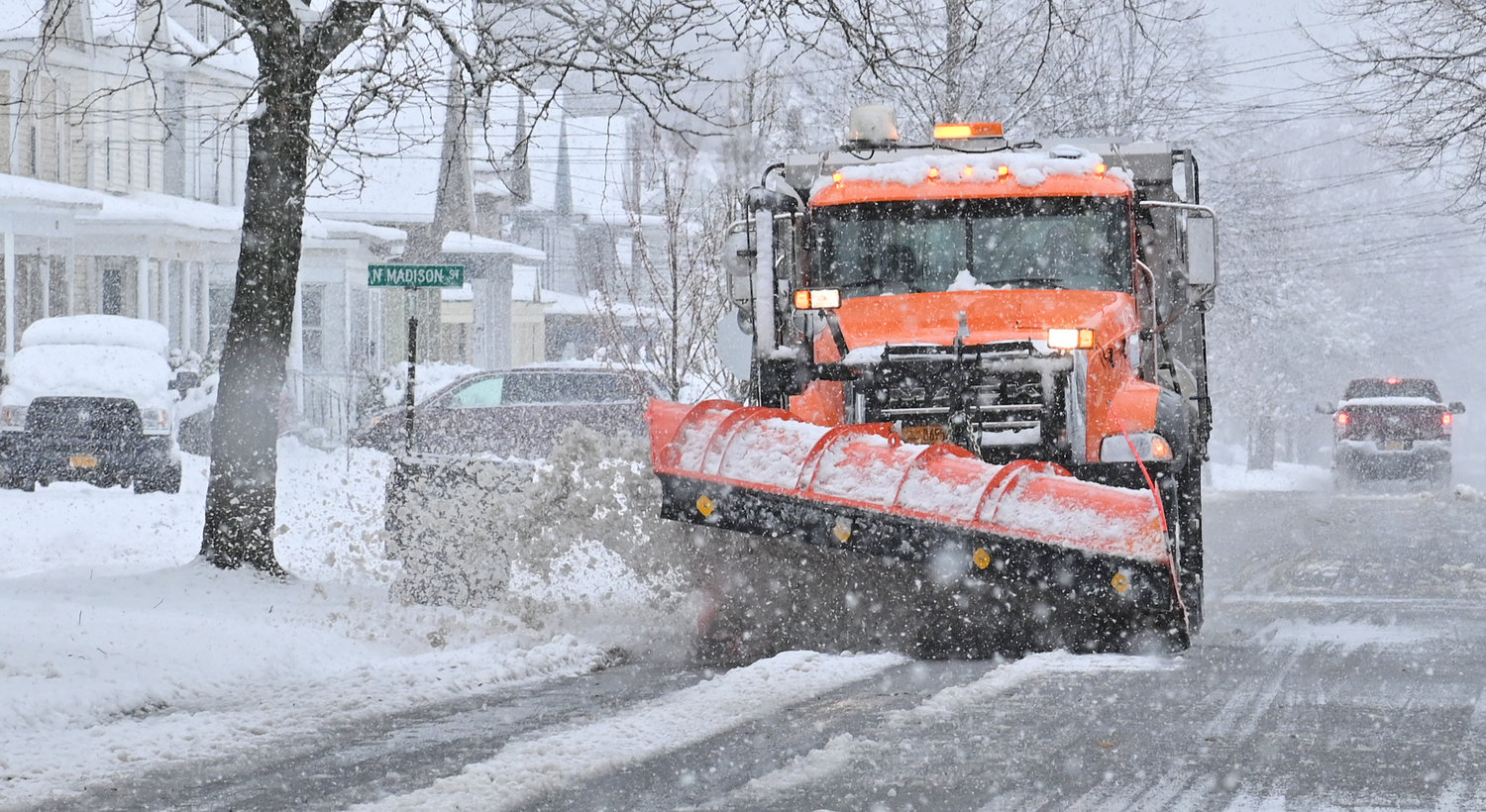 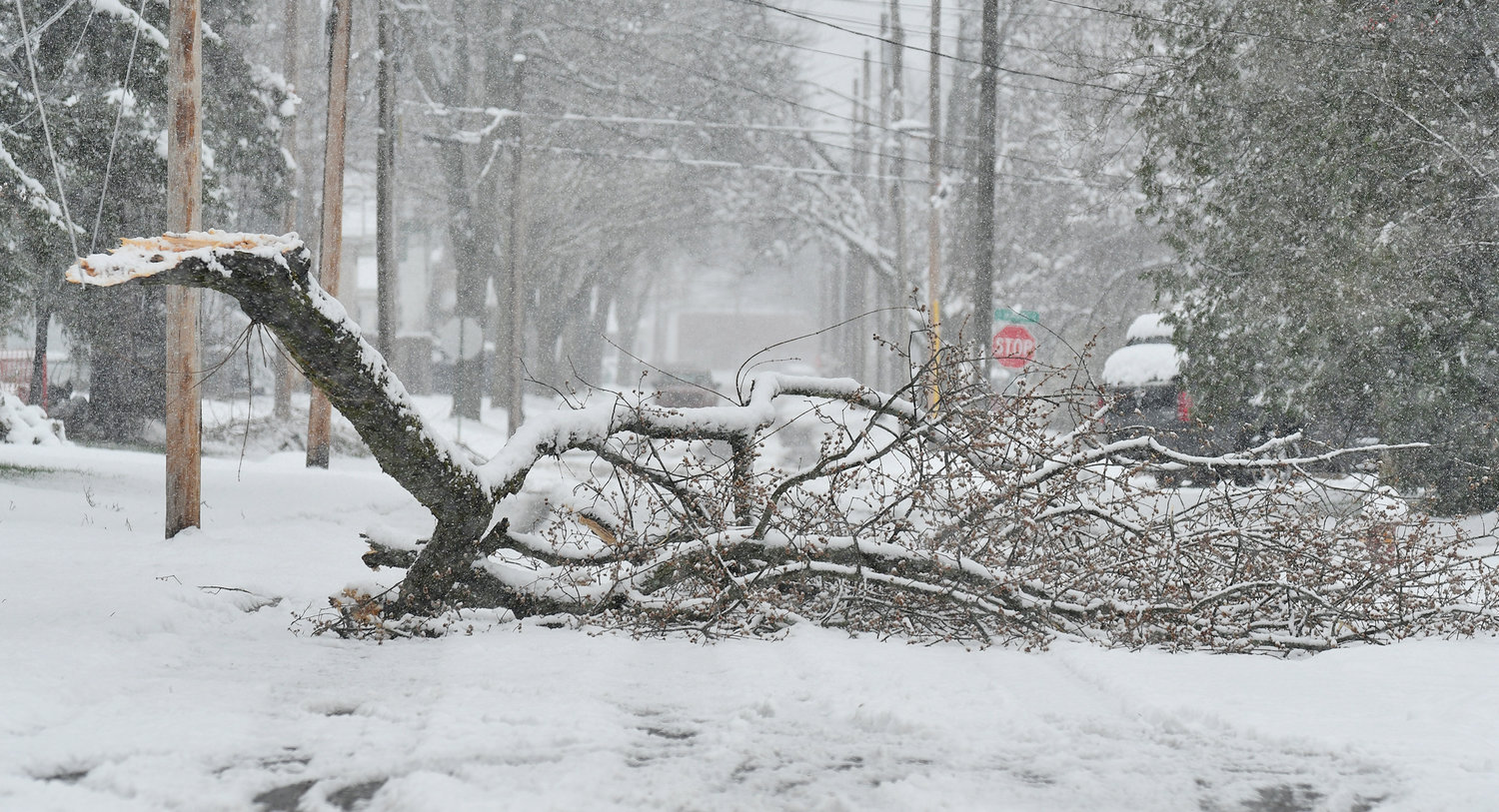 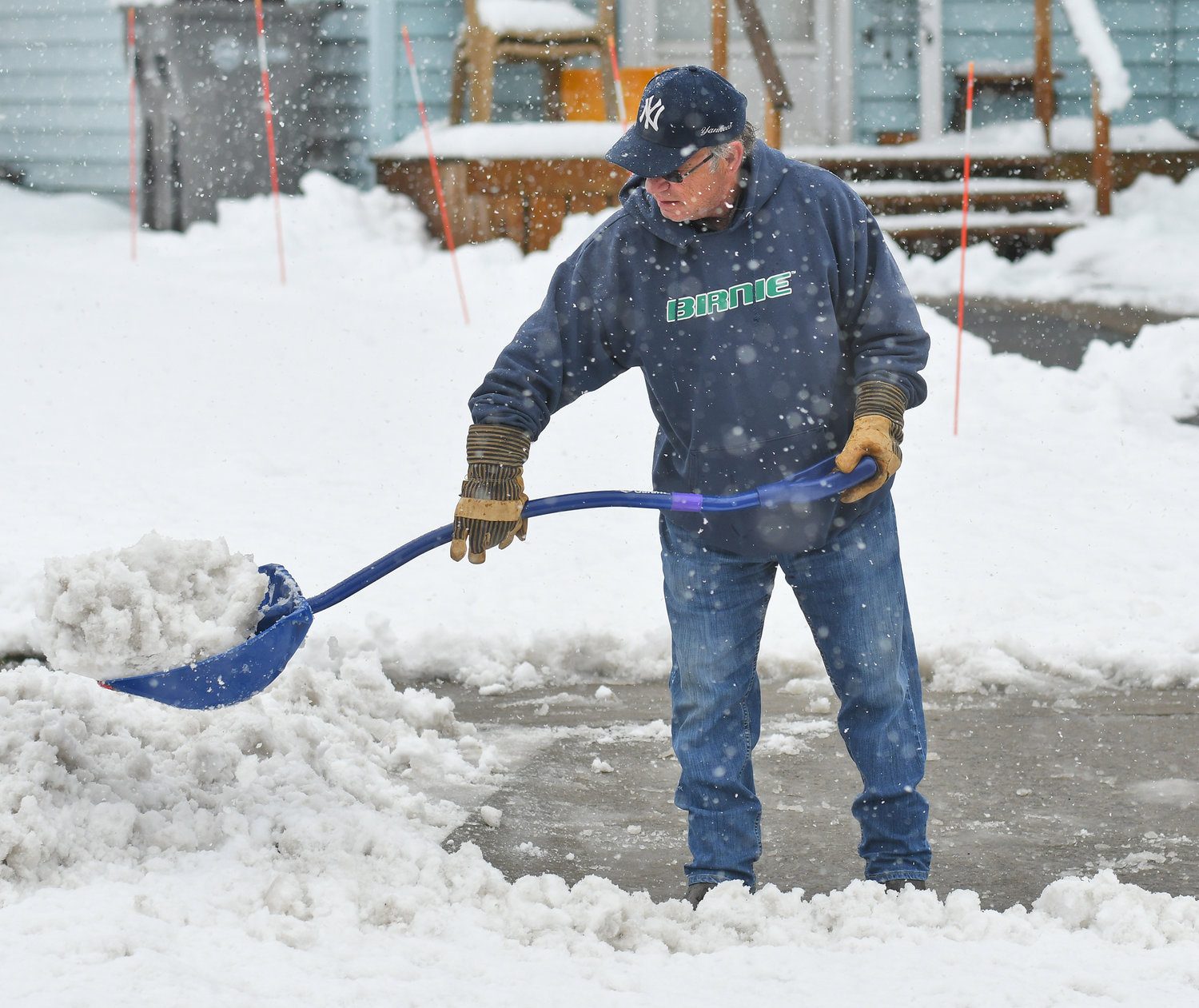 Thousands of people are without power and rescue crews are out in full force across the region as a heavy, wet and possibly record-breaking snowfall blanketed the region this morning.

"This is certainly one for the record books."

According to the National Weather Service, anywhere between five to 12 inches of snow was expected to fall throughout the Mohawk Valley. With temperatures hovering around the freezing mark, the snow was particularly wet and hard to deal with. The heavy buildup led to dozens of reports of fallen power lines and wires throughout all Central New York, along with trees across roadways and causing multiple obstructions.

Lott said the National Weather Service in Binghamton would be watching to see if today's snowfall would break one-day record totals for this time of the year.

National Grid was out to multiple pockets of power outages, with more than 1,000 customers without power in Remsen, Newport, Salisbury, Ilion, and more. Fallen wires were reported in every corner of the valley and beyond, with additional reports of trees on power lines. A transformer was reportedly on fire in the Town of Lee.

"A storm system came through the area overnight. It produced a band of heavy snowfall for the eastern part of our forecast area," Lott explained.

"With this being April and it being a little warmer, this was a very wet and heavy snow."

Lott said the weather started as typical April rainfall, but temperatures just happened to make it cold enough to turn the rain into snow.

"We were just on a cold end of this system," Lott stated. "It was just that temperatures quickly fell."

Lott said the heavy snow was expected to transition into a lighter snowfall and then continue into the afternoon. Rain showers were then expected to replace the snow throughout the afternoon thanks to warming temperatures, with a return to light snow overnight into Wednesday. Lott said the Oneida County area, at least the lower elevations, should expect less than an inch of accumulation by Wednesday morning.

Multiple schools, government offices, businesses and roads were closed due to the snowfall, including almost all public schools as well as Hamilton College and Herkimer College. Snow emergencies were declared in multiple municipalities, with drivers asked to say off the roadways to allow plow crews to clear the streets.