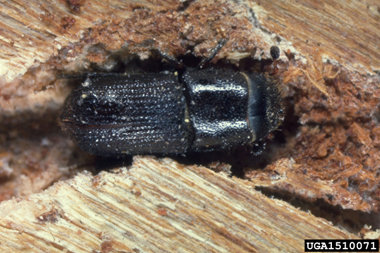 DIGGING DEEP — The invasive southern pine beetle is shown boring into a tree in this photo from the New York State Department of Environmental Conservation. The species has moved farther north, and in greater numbers, than previously thought, state officials have reported.
(Photo courtesy NYSDEC)
Posted Monday, April 18, 2022 8:44 pm

ALBANY — The state Department of Environmental Conservation and the Office of Parks, Recreation, and Historic Preservation have announced that southern pine beetles have been found farther north than previously documented and in greater numbers, suggesting their range is expanding and populations are on the rise.

Southern pine beetles are destructive forest pests that pose a significant threat to the state’s pine forests, particularly pitch pine forests like those found in the region as well as in the Albany Pine Bush and Minnewaska State Park Preserve.

The DEC Commissioner Basil Seggos said, “DEC, in partnership with OPHRP, will continue to proactively work to combat the environmental threats that the SPB poses to New York’s treasured forestland. Our ongoing strategies will help mitigate the impacts of SPB in the Hudson Valley and help slow the spread by removing infested trees and manage susceptible forests using thinning and prescribed fire activities to increase forest health and resiliency.”

“Southern pine beetle poses a real threat to some of our most fragile ecosystems and iconic landscapes, which could have a large impact in multiple state parks, including Minnewaska State Park Preserve, Schunnemunk Mountain State Park, Hudson Highlands, and Taconic State Park,” said OPRHP Commissioner Erik Kulleseid. “We will continue to partner with DEC to identify potential SPB infestations, allowing us the ability to react quickly and hopefully mitigating any large scale damage before it occurs.”

A joint research project between DEC’s Division of Lands and Forests and OPHRP’s Division of Environmental Stewardship and Planning resulted in a new trap detection of SPB at the Saratoga Sand Plains Wildlife Management Area in Saratoga County. Additionally, significantly larger trap catches of SPB were documented at locations in the Hudson Valley where SPB were previously found, and several infested trees were discovered in Taconic State Park, the first infested trees to be identified outside of Long Island. Ecologically sensitive pitch pine habitat in upstate New York will increasingly be at risk if SPB populations continue to increase and expand.

DEC, OPRHP, the Albany Pine Bush, and other partners have been monitoring SPB movement for several years in the areas of the state north of the known infestations in New Jersey and Long Island. Since 2016, SPB had been detected in low numbers in insect traps in the Hudson Valley but the recent increase in trapped beetles may mean they will soon be established north of Long Island.

The three infested pine trees in Taconic State Park were found near Sunset Rock during joint survey efforts by DEC and OPRHP crews. A DEC strike team removed and destroyed the infested trees in cooperation with OPRHP staff. Surveys of pine forests near the increased trap catches continue, and experts with both state agencies and partners agree that more infested pines are likely to be found in the next few years as the climate warms.

“We have known for some time that restoring the globally-rare ecology of the Albany Pine Bush is benefiting many rare plant and animal species and reducing the risk of uncontrolled wildfire,” said Neil Gifford of Albany Pine Bush Preserve. “It turns out that the forest thinning, and prescribed burning may also protect the preserve’s iconic pitch pines from a new threat, southern pine beetle. This approach has the added benefit of reducing the harmful effect of southern pine beetle and other forest pests and diseases.”

Native to the southeastern United States, SPB was first discovered infesting pitch pines on Long Island in 2014. Since that time, it has killed hundreds of thousands of trees on Long Island alone. SPB attack primarily pitch pine and red pine but will attack additional conifers when outbreaks occur. DEC encourages the public to report any signs of SPB that they encounter in pine forests (outside of Long Island) by emailing pictures and location information to foresthealth@dec.ny.gov. The signs of an infestation include discolored needles (yellowing to brownish-red), popcorn-sized clumps of resin called pitch tubes anywhere along the trunk, tiny holes in the bark in a scattershot pattern, and s-shaped galleries under the bark.