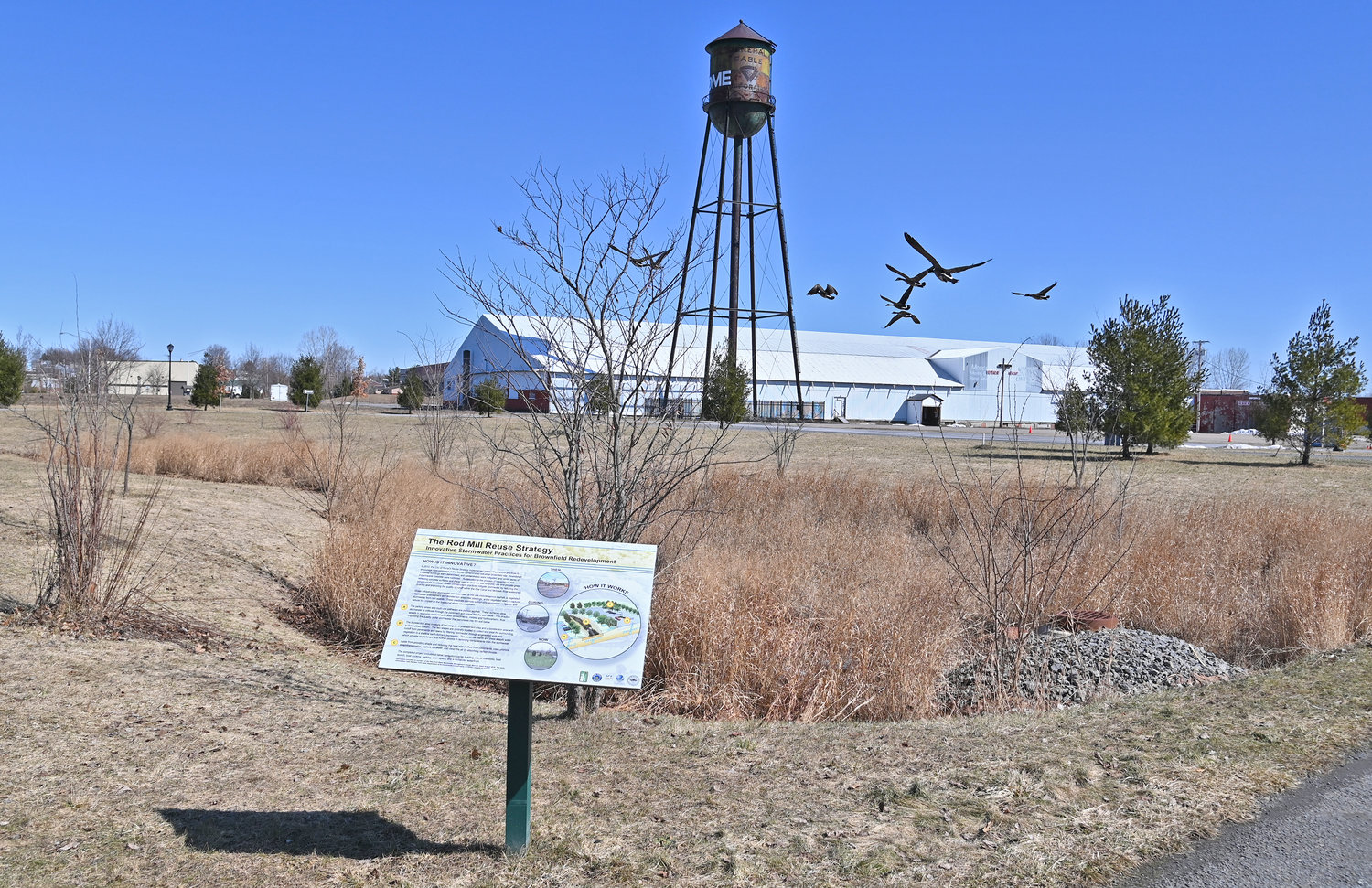 READY FOR REUSE — Signage points to a former industrial area which has been cleaned up for future reuse — the “biotention area” of the Rod Mill Reuse green area — which will now be home to a new Hamilton College boathouse.
(Sentinel photo by John Clifford) 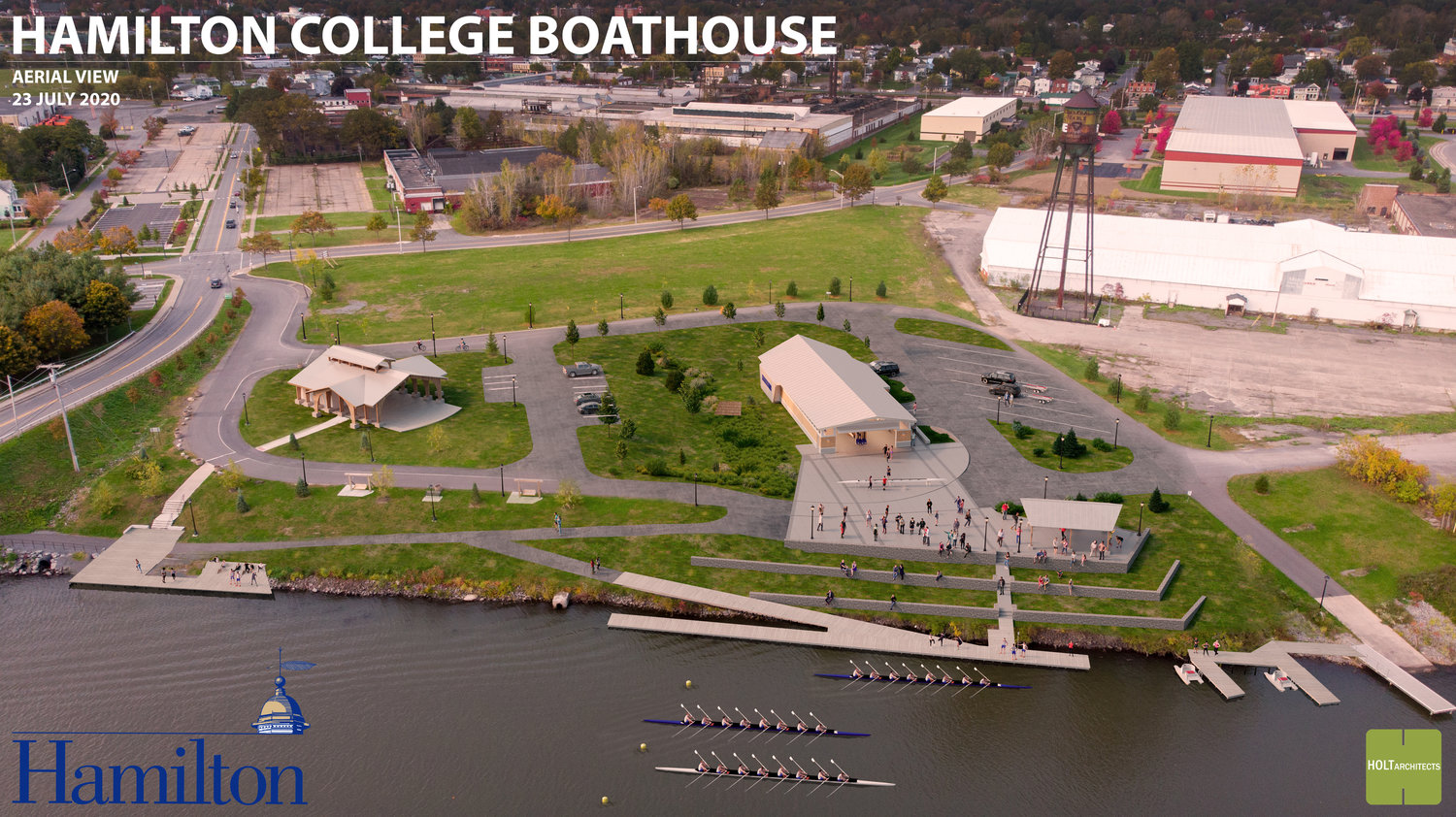 FORMER BROWNFIELD DEVELOPMENT — Hamilton College provided a futuristic view of its men’s and women’s rowing team boathouse that will be constructed at the former Rod Mill site at Bellamy Harbor Park. City officials said they are excited about the partnership and hope it will only spark further private investment and development in the area. (Illustration courtesy Hamilton College)

FUTURE FINISHED PROJECT — This is a computer-generated photo of what the Hamilton College boathouse, to be used by the men's and women's rowing team, will look like once construction is complete at Bellamy Harbor Park. 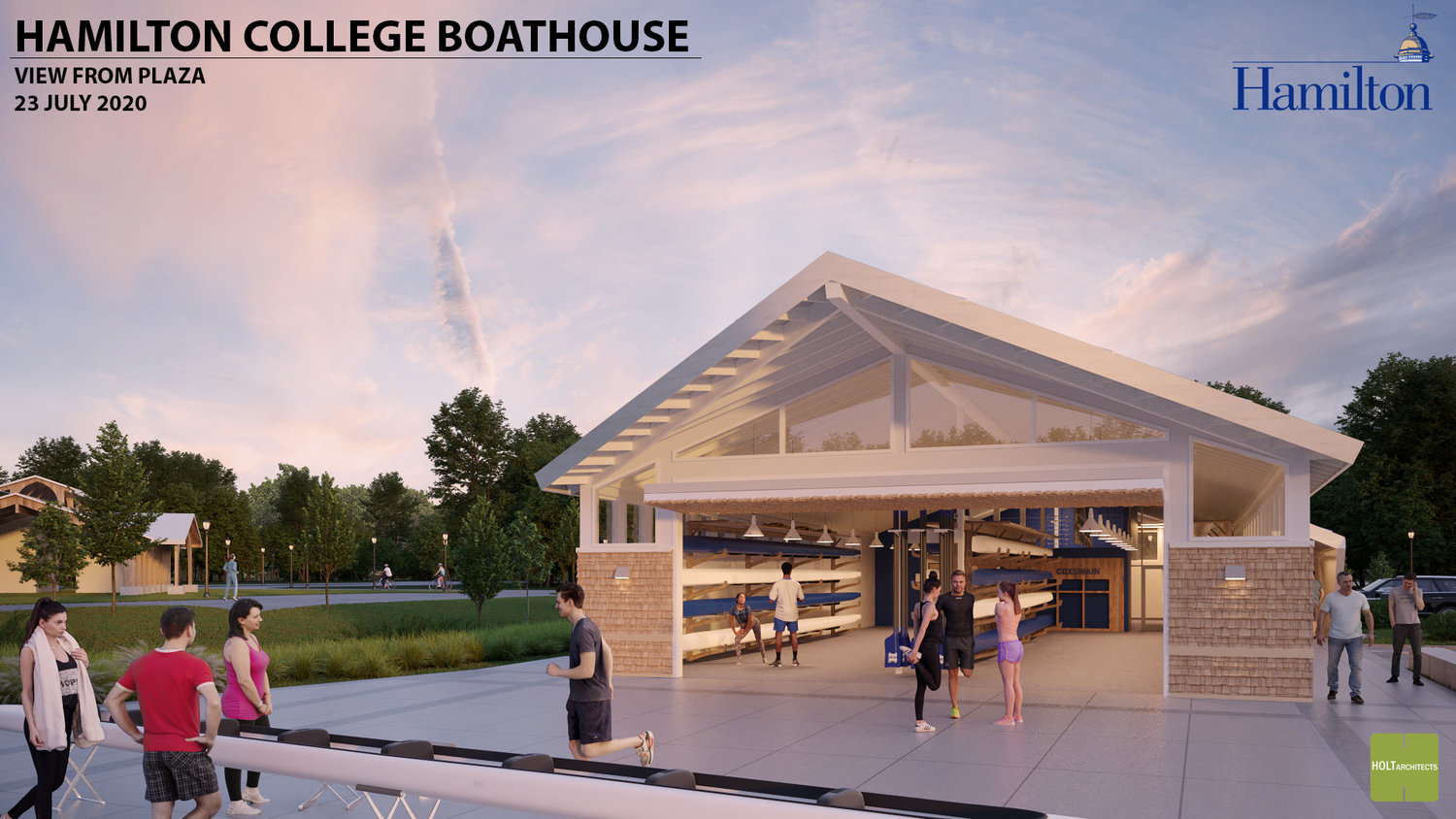 INSIDE VIEW — This computer-generated image shows what the inside of the Hamilton College boathouse will look like once completed at Bellamy Harbor Park.
Previous Next
Posted Saturday, March 20, 2021 4:00 pm

CLINTON — Working closely with the City of Rome, Hamilton College is on the verge of breaking ground this April for a new $2 million boathouse located on the Erie Canal in Bellamy Harbor Park.

Purchase of the land was through the Rome Industrial Development Corporation following unanimous approval by the City Council last June.

“The proposed boathouse facility is going to be beautiful and will really complement the Navigation Center area,” said Mayor Jacqueline M. Izzo.

The boathouse will be a significant enhancement from the current rented facility used by the Hamilton men’s and women’s rowing teams, city and college officials say. It will include a much larger boat storage and operations area, a team meeting room, a coaching office and indoor restrooms. The project has been made possible with gifts raised and contributed over the past two years, primarily by alumni rowers.

“The new facility will afford our coaches and student-athletes the amenities necessary to enhance our already successful rowing program,” said Director of Athletics Jon Hind, Class of 1980. “We have enjoyed our long partnership with the City of Rome, and we look forward to assisting with the development and programming of Bellamy Harbor Park.”

The design, engineering, landscape, mechanical and construction services will be completed entirely by Upstate New York companies. After an initial design competition, Holt Architects of Ithaca was selected as the building architect. Their design team included Erdman Anthony of Rochester (mechanical and electrical), Trowbridge, Wolf and Michaels of Ithaca (site and landscape), and Delta Engineers of Vernon (civil engineering). The construction contract has been awarded to Beebe Construction Services of Utica.

“We’re going to get Bellamy Harbor used a lot more, and the boat launch used a lot more,” said Mortise. The Hamilton College rowing team, “was already down there three days this week. This is not only going to bring more people” to the park, “but it will also attract families from out-of-town into that vicinity, and hopefully they will eat and lodge in Rome. That’s not to mention the magnitude of the building — the boathouse location itself is an advantage.”

Deputy Director of Community & Economic Development Matthew J. Andrews said projects like the Hamilton College boathouse was why there was a Brownfield Opportunity Plan included in the city’s waterfront improvement plan.

“This project is something the community has envisioned since the revitalization planning project” for the waterfront, Andrews said. “The site is located at the former Rod Mill site and that site had received over $6 million in clean-up funding to bring” that area “from brownfield status to a reusable site, and the public asset that sits there today.”

He said, “the city is extremely excited that Hamilton decided to build a facility at the project site, and we hope this spurs additional development projects. There is still 2.5 to 3 acres” of land “available for development at the site for private investment.”

Andrews went on to say that the boathouse is also important in attracting area residents, as well as others, to come experience the waterfront, perhaps for the first time, “which could lead to a snowball effect” — improving the quality of life for the community.

Being part of the Brownfield Opportunity Area, “the site is listed as a strategic development site, and the community took time to focus specifically on this site and make it beneficial for both private investment and public quality of life,” said Andrews. “Hopefully this private investment shows local, state and federal government programs invested in for planning this, is a primary example as to why it’s important to start with a strong plan and find the right partners to make all this happen.”

Hamilton coaches have agreed the boathouse location itself is an advantage.

“The stretch of water on the Erie Canal in front of the new site is connected to the Mohawk River and opens up earlier in spring,” explained James Lister, head coach for women’s and men’s rowing. “This is a huge gain for the program and will allow us to gain two more weeks of rowing outside in the spring.”

More time on the water brings better results, said Steven Larson, Class of 2003, who said he thinks the program’s upward trajectory will continue.

Rower Ann-Sophie Koglin, Class of 2020, who was a team captain, said she takes pride in the program’s humble roots, but she too thinks the new boathouse will help attract rowers.

Koglin remembered when she first visited Hamilton for an overnight, she was struck by the contrast between the beautiful campus and the sub-standard boathouse. Not that that inhibited her success. She and her team earned an at-large bid in the 2019 NCAA championship, and she helped lead the varsity 8 to a top 10 ranking in the final Division III coaches’ poll in each of her first three seasons.

Besides qualifying for the NCAA championship and earning a sixth-place team ranking, the women’s team had a fourth-place finish in the 2019 Head of the Charles Regatta in Boston. For the past two years, the men’s team has been a silver medalist in the varsity 8+ and in 2019 finished just one second behind the winning team.