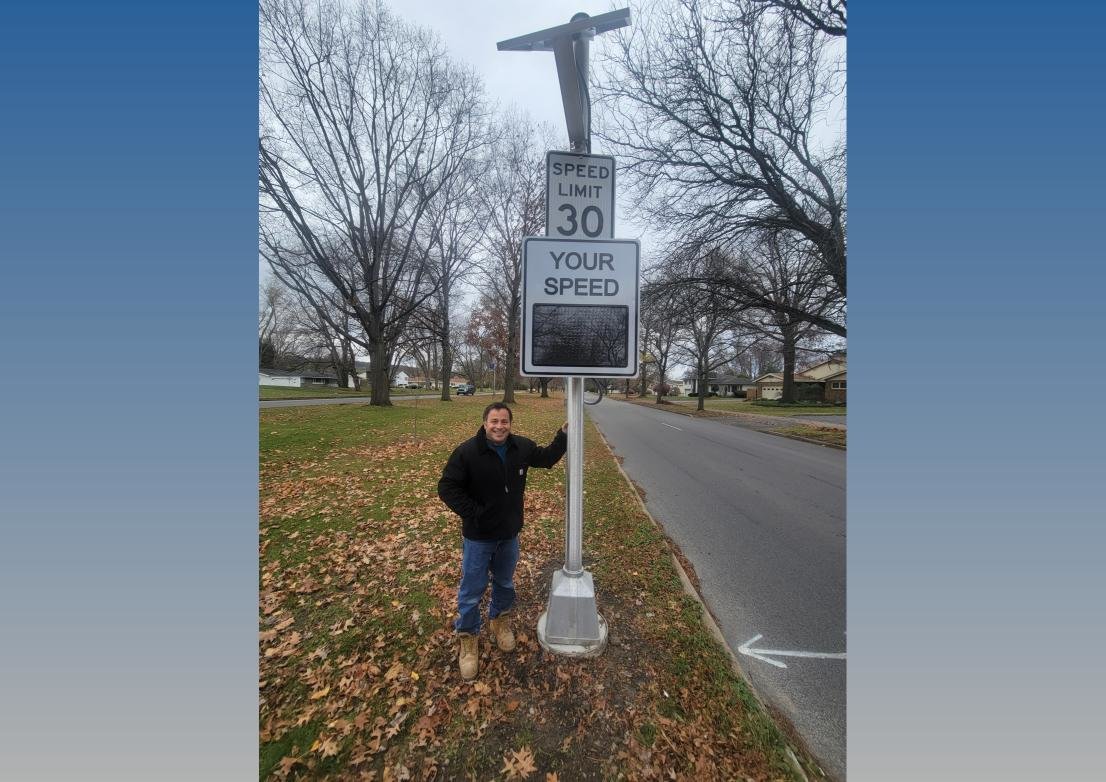 Fourth District Councilor Frank Meola poses with one of the speed trackers installed in Utica. The city said the devices are part of an effort to keep pedestrians safe.
(Photo submitted)
Posted Thursday, November 17, 2022 10:40 am

UTICA — Utica Mayor Robert Palmieri, along with Fourth District Councilor Frank Meola, has announced the installation of several new smart speed tracking devices in an effort to improve the safety of residents, particularly during the school year.

“Our primary concern is the safety of the residents of the city of Utica,” said Palmieri. “The quality of life we’re able to deliver in Utica is built on the foundation that it is a safe place to live and raise a family. We’ve taken several measures to be pro-active when it comes to safety, and having a data-driven approach to speed enforcement will help Utica remain on the forefront of using technology to be as efficient and effective as possible.”

The new signs are solar-powered and are capable of monitoring traffic counts, average speeds and high speeds in target areas throughout the city. With this data-driven approach, public safety officials can monitor traffic patterns and focus resources on areas where speeding is occurring, officials said.

The signs themselves also act as a reminder for drivers to drive safely by displaying the speed of passing cars digitally.

Meola was the first councilor to ask that a portion of American Rescue Plan Act money slated for his district be used on the smart signs. Subsequently, a number of other councilors joined in asking the same, officials said. Residents and public safety officials have expressed concern about the speed of traffic in parts of Utica, particularly near school zones. As a result, many of the councilors decided to use their share of $1.2 million allocated to the common council through the American Rescue plan act to purchase these smart signs.

“The best ideas start with the residents,” Meola said. “In this case, there was a concern about the high rate of speeds being traveled through our neighborhoods. With children going to schools and playing at parks, my continuants wanted to make sure that we were doing everything we can to keep everyone safe. I commend the police department, Mayor Palmieri, the engineering department and everyone who came together to find this data-driven solution.”

Palmieri has agreed to bolster the number of signs in the city as need arises and the implementation of current requested signs is complete.