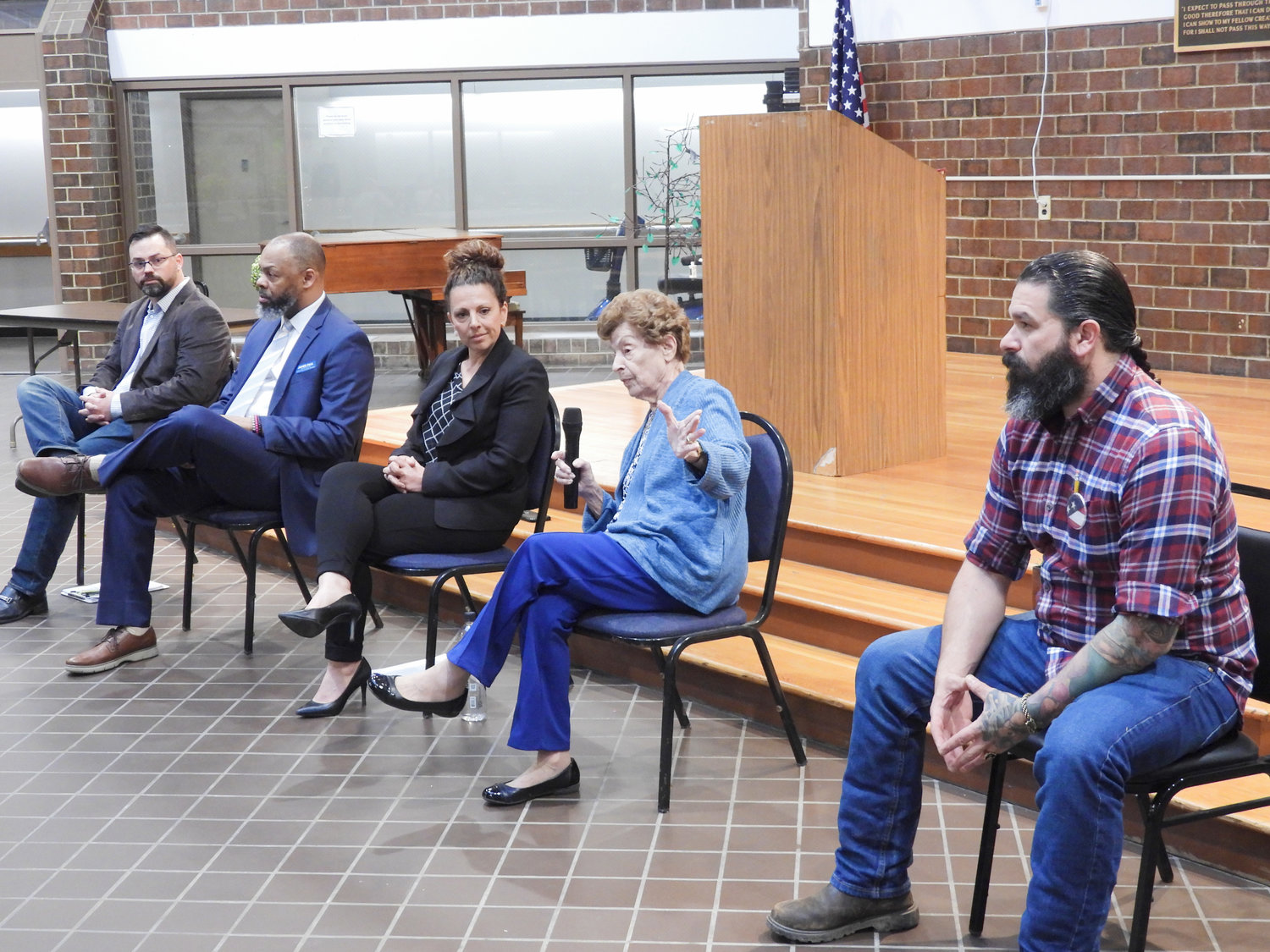 Candidates for the Utica School Board election answering questions and outlining their platforms on Monday at the Chancellor Apartments as part of an East Utica Neighborhood Watch program. From left: Howard Potter; James Paul; Tennille Knoop; Lucretia Hunt, the event’s master of ceremonies; and Mike Fellows.
(Sentinel photo by Charles Pritchard)
Posted Thursday, May 5, 2022 12:30 pm 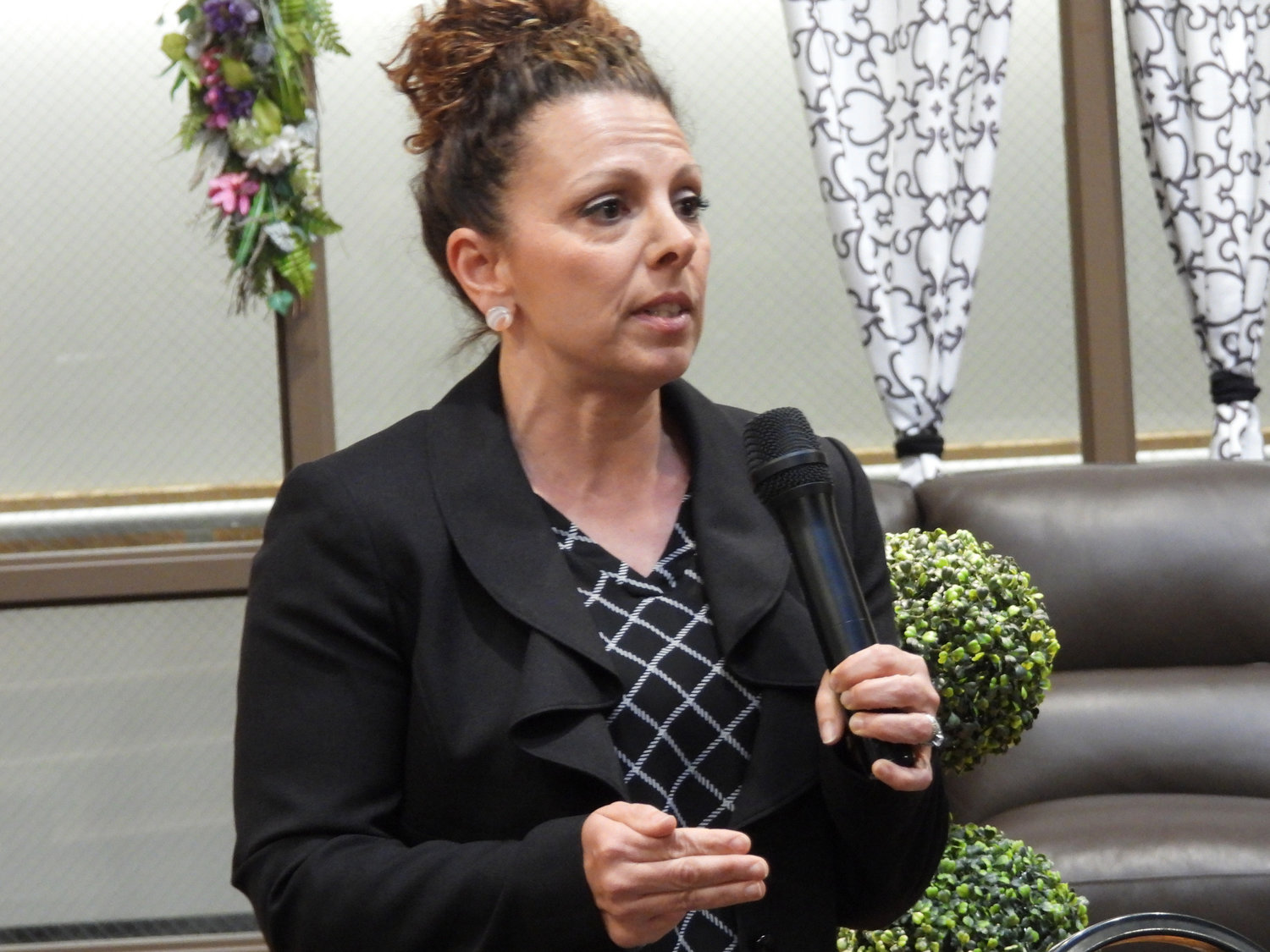 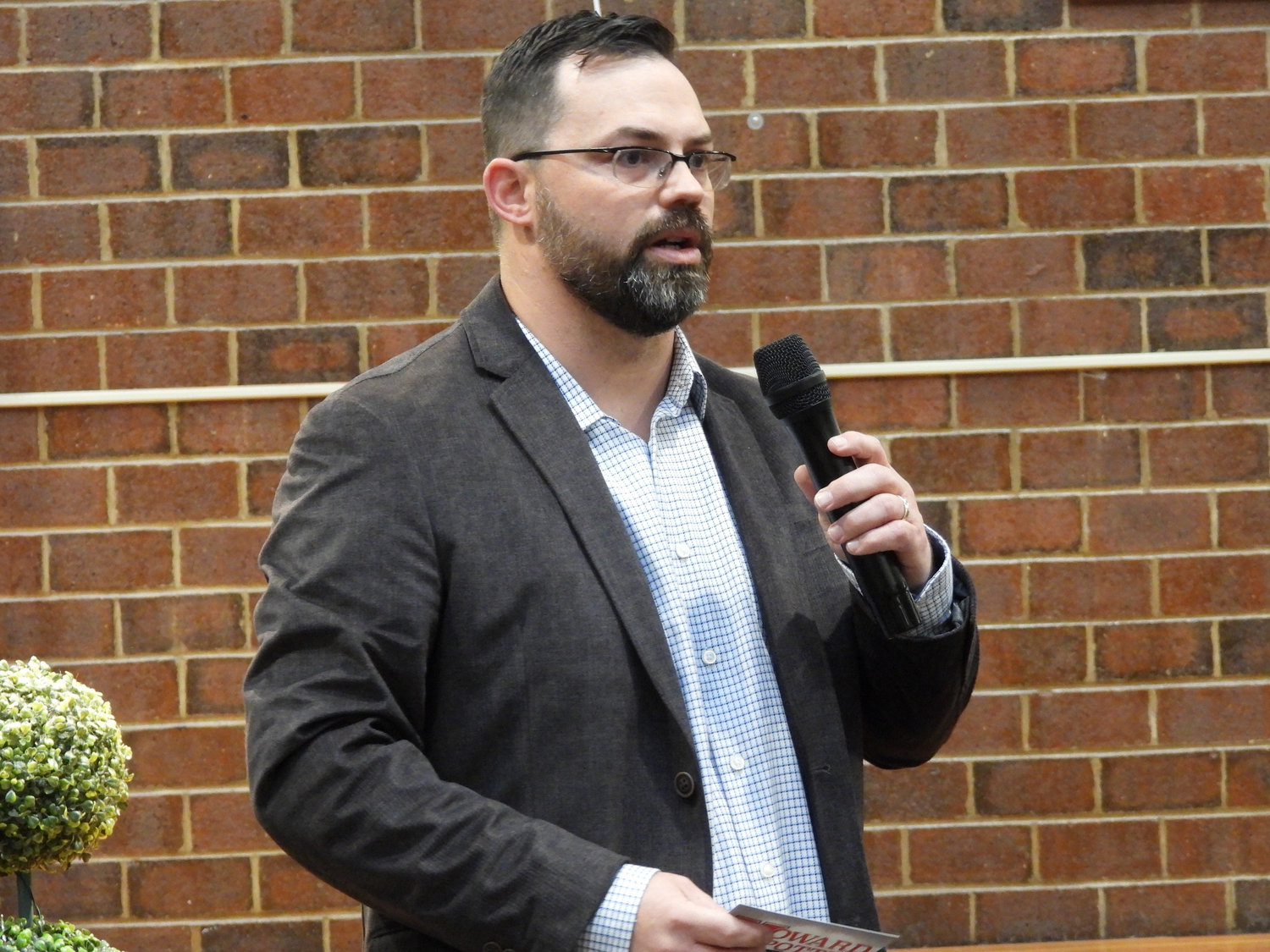 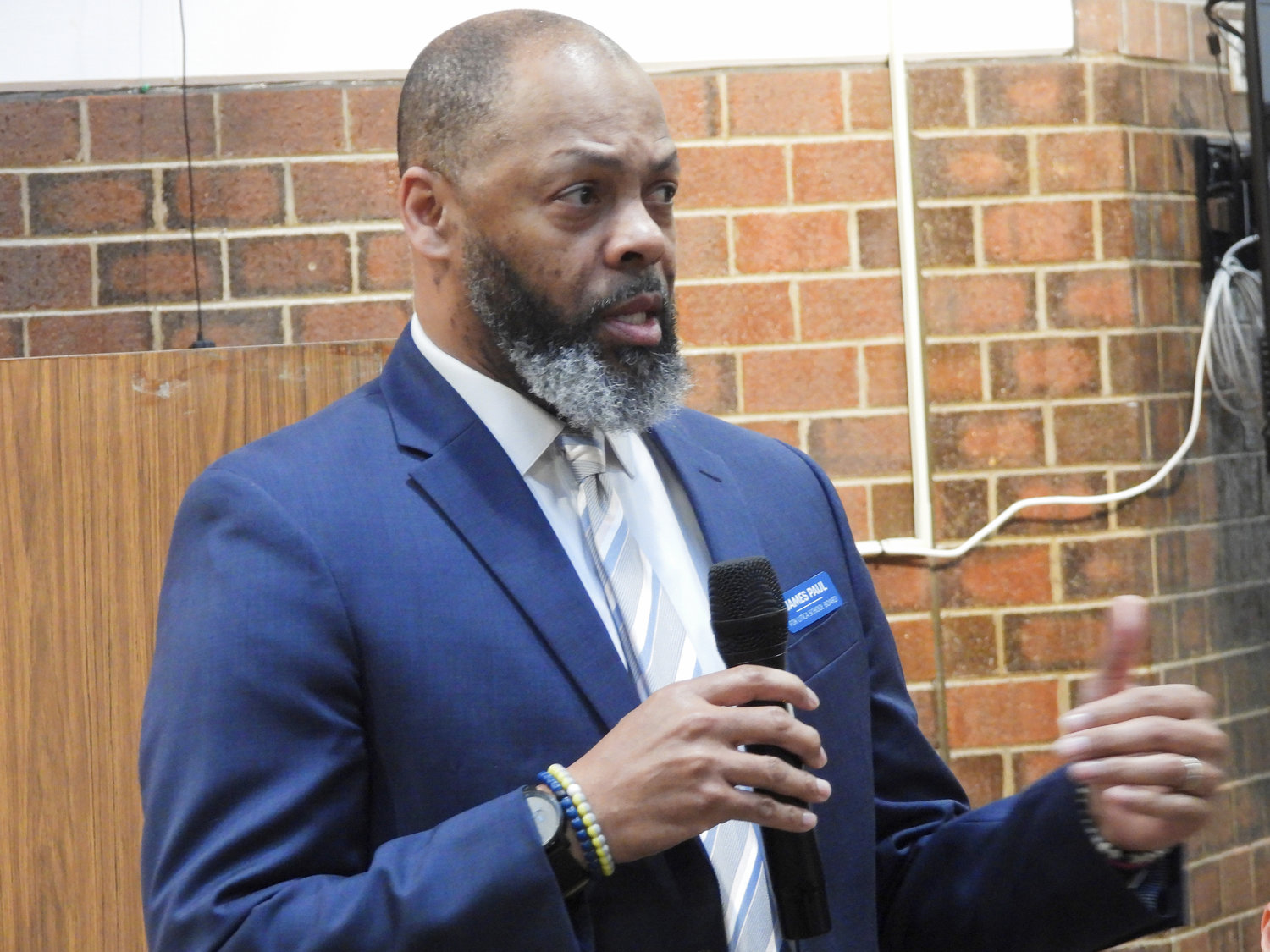 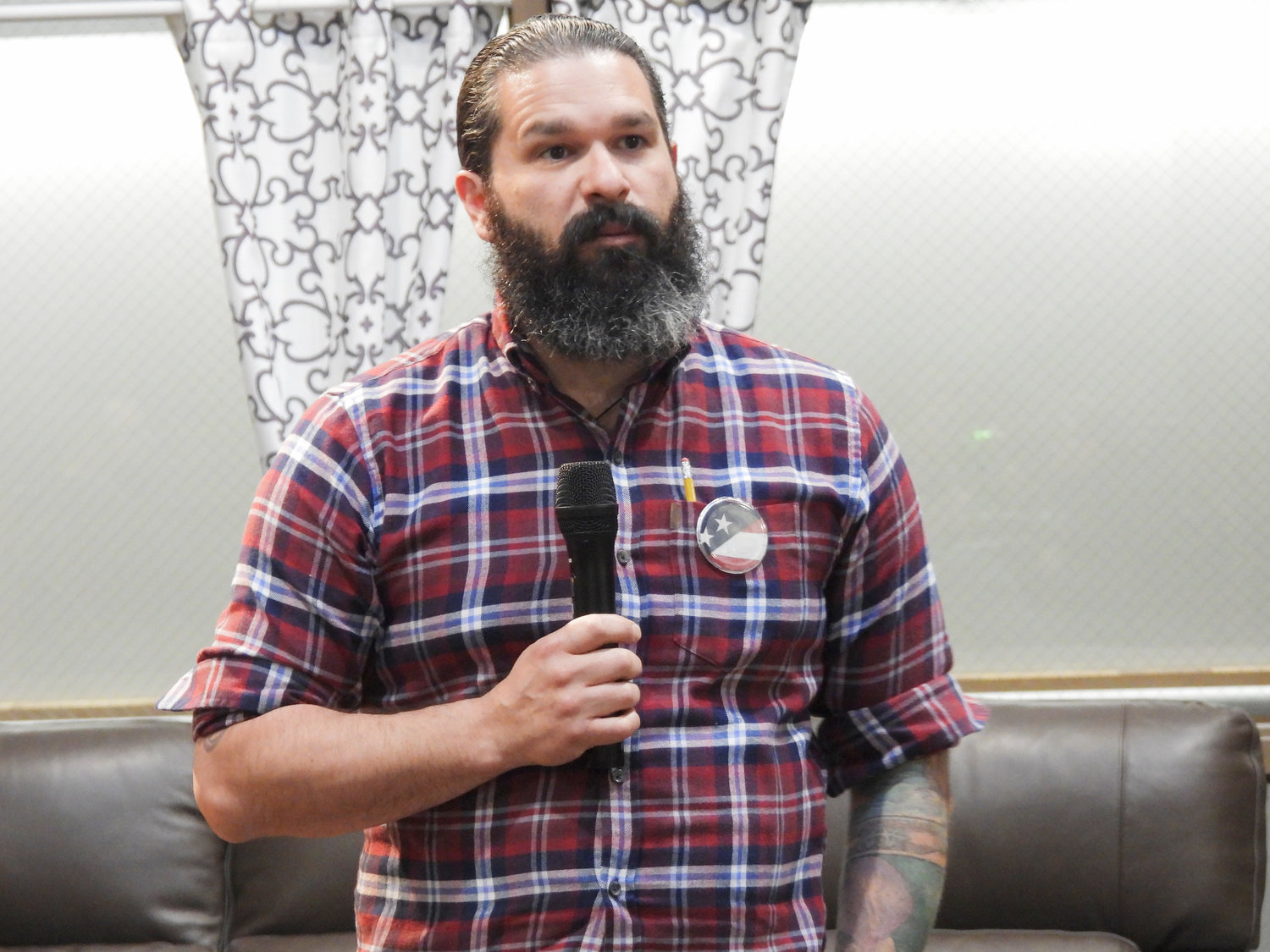 UTICA — Several candidates in the upcoming Utica City School District board of education elections answered questions and outlined their platforms as the East Utica Neighborhood Watch hosted a meet the candidates event at the Chancellor Apartments, 417 Bleecker St.

Candidates in the board of education election, scheduled for Tuesday, May 17, include Mike Fellows, Tennille Knoop, Jack Lomedico, James Paul, Howard Potter, and David Testa. Testa and Lomedico were not in attendance at Monday’s event.

“Education is important, no matter what side of the tracks you’re from,” said Lucretia Hunt, the East Utica Neighborhood Watch chairwoman, who encouraged residents to get out to vote and to “do your part.”

Knoop said she was determined to go all the way as a candidate for the board. Her son had recently broken his arm, and as a worried mother, she said she almost called in. “I thought about staying home, but when it comes down to it, I have to be here. Because it’s important, and I want to show that I’ll always be here,” she said. “As a mom, I dropped everything [May 1] when my son was hurt, stayed at the emergency room, and did everything to take care of him. Because that’s what a mother does. But in this school district, there’s a lot of children that don’t have that.”

If elected to the board, Knoop said she would show up for every single event and meeting, for every child. “I’m invested in our school and our children’s future,” she said. “Right now, with the new budget, we have the opportunity to change it and be the foundation and platform that other schools look to as an example.”

Potter said he’s a proud father with a son at Proctor High School and a daughter who recently graduated. One of his biggest concerns with the Utica City School District is the budget and how it’s being handled.

“According to New York State, school board members are responsible for putting the budget together and presenting it to the public,” he said. “You have board members just passing the dollar amount.”

Potter said he’s gone through the budget presented by the school board and asserted that taxes didn’t need to be raised. “The money is there; we don’t need to increase taxes,” he said. “It’s being allocated for line items, and it’s not being used. For example, there’s a line item for supplies for the school where [taxpayers] invested $530,000, and we spent around $315,000. This needs to improve.”

Paul said he wanted to improve the district and use it as a force to support student success but asked for something important from voters.

“I want you to hold the Utica School Board to hold our feet to the fire,” he said. “I’m asking you to attend school board meetings and ask the same questions you’ve asked candidates already. Let’s bring your voice into the school board meeting so the next time, you don’t have to ask the same questions because you’re getting the same results from the same group of people who run the district.”

Paul said the district can be better and deserves to be better. “But we have to work at doing that and can’t let people sit on the board and do nothing,” he continued. “As our children suffer in school and our leaders say it’s not their fault, we have to look at this differently. After all, the definition of crazy is doing the same thing and expecting different results.”

Paul also advocated for more transparency and input from parents and teachers. Regardless of who gets elected, he asked constituents to get involved, go to meetings, and ask questions.

Fellows said he’s running to be the voice of students and ensure that they get everything they need. “Their education needs aren’t being met, and their constitutional rights are being violated,” he said. “I’m here to make sure there is a board member that’s there to speak up for them.”

Fellows said there was a need to start a conversation about the neglect security guards and janitorial staff has been facing at the Utica School District.

Among the questions asked to candidates was just what they’ve done for the Utica City School District already.

Paul said he’s a co-director of the Junior Frontiers program and recently has worked to help Utica school students by offering them help on SATs, with a combined 14 weeks of classes over two programs. Paul said he hosts Saturday programming for the community that many Utica students use. “That’s mental health for an hour, karate for an hour, Zumba for an hour, and culinary arts for an hour. So four hours of programming every Saturday that’s available to students and gives them something productive to do and gets them off the streets.”

Knoop said she’s been president of the Parent-Teacher Organization for six years and has been involved for nine.

“I got involved because when my son was in kindergarten, there was an end of the year carnival that you had to pay for,” she said. “There were students in tears. My son was able to get the cotton candy and get a snow cone and play games, but his peers couldn’t. So the first thing I did when I became president was make that carnival free.” Knoop said through the fundraising efforts of teachers and parents, the school’s carnival has been free.

Potter said over the years, he’s been acting as an advocate for parents — even going on the radio to decry the lack of transparency and action.

“There was a parent with a son who had a bad heart condition,” Potter said. “He needed oxygen, and there was no one there to administer it. We didn’t even have a nurse at the time. For a year, that parent let the school know their child had these issues and went through the chain of command.”

Potter said she advocated for her and asked her to come to a school board meeting, where she was crying to the school board and asking for help.

“And at the end, you know what she was asked? ‘Miss, can you hurry this up.’ Can you believe that?” Potter said. “Her child was being sent home every other day and losing their education.”

Over the past year, Potter said he’s been going to meetings, going on the radio, and working with parents to get information.

Fellows said he’s been working to expose issues at the Utica City School District, including that children were being pushed through the system without care for their education.

“The curriculum is not a quality or sound education; they have the right to learn,” he said. “My child spent three years at the district and didn’t retain any of it. And now, with my seven months of homeschooling, her grades and retention have improved. She’s made great leaps, and I think we need to start addressing this.”

For information on the election, including polling locations, go online to www.uticaschools.org.

One question that all candidates in attendance agreed on was just who was the final authority of the school district: the school board or the superintendent.

“The school board,” Knoop said.

“The buck stops with the school board,” Potter said.

“The school board is the sheriff of the campus,” Fellows said.