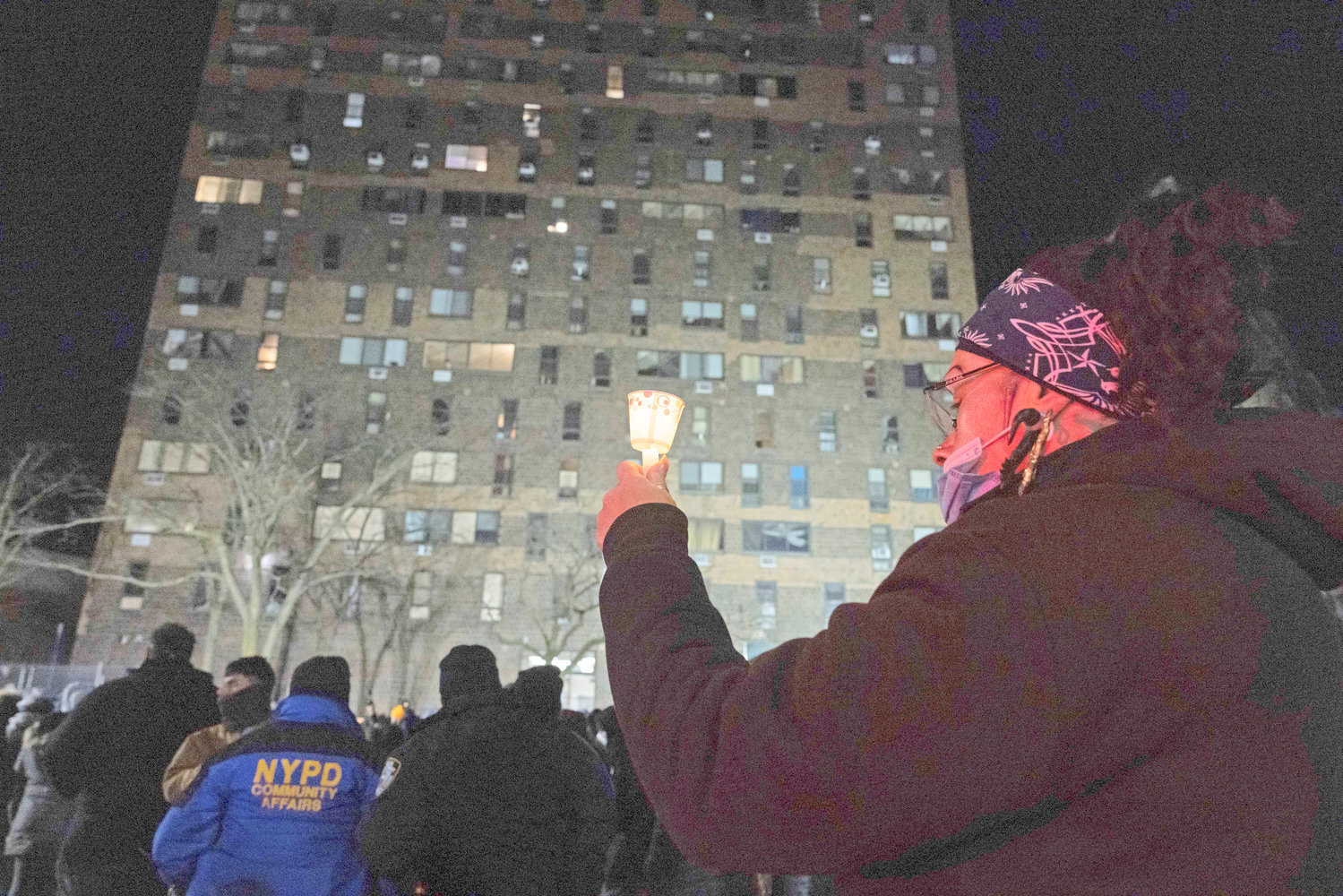 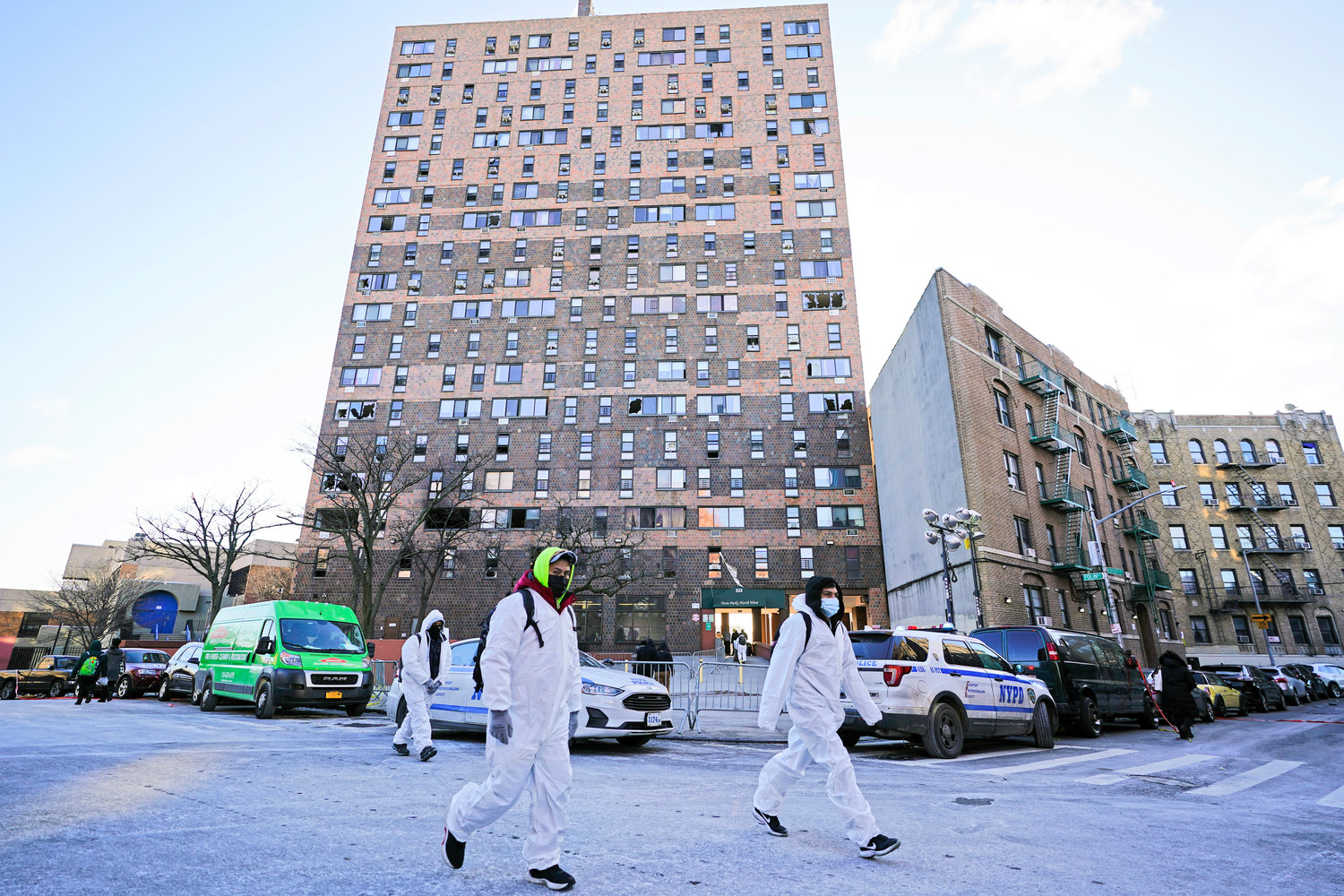 CLEANING UP — Workers in protective clothing walk from an apartment building which suffered the city’s deadliest fire in three decades, in the Bronx borough of New York, Tuesday, Jan. 11, 2022. A malfunctioning electric space heater apparently started the fire Sunday in the 19-story building in the Bronx, fire officials said.
(AP Photo/Matt Rourke) 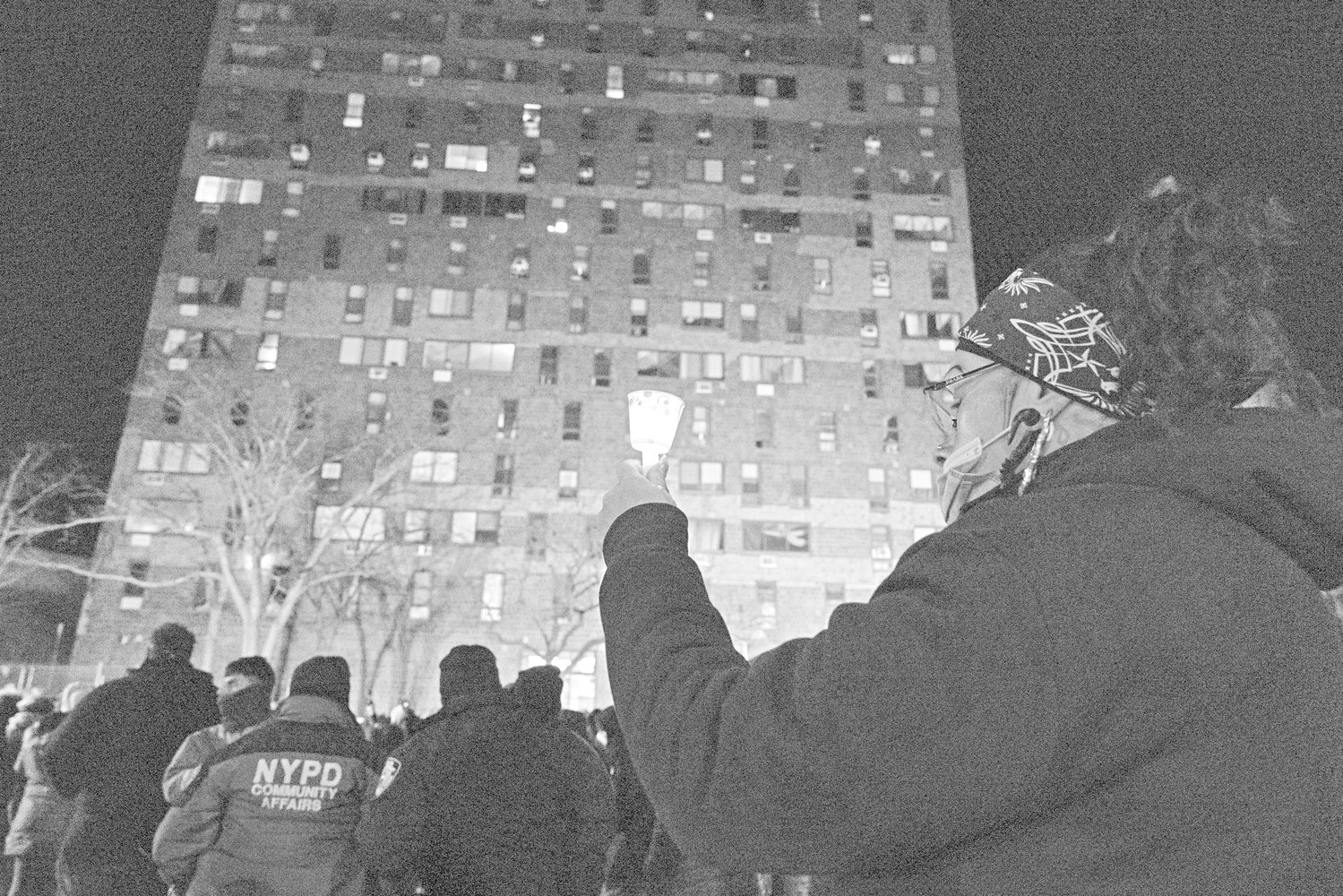 NEW YORK (AP) — It started as just another January morning, the damp chill prompting a family on the third floor of a drafty Bronx apartment tower to run a space heater for extra warmth, as residents had done countless times before.

In the moment, that decision hardly deserved a second thought.

Soon, though, it would prove the first in a series of fleeting choices and troubling circumstances that combined to fuel a staggering tragedy:

• If only the heat inside apartment 3N had been sufficient;

• If only the family, fleeing a fire sparked by the malfunctioning space heater, had pulled the door closed behind them;

• If only their neighbors, conditioned to ignore frequent alarms that nearly always proved false, had not disregarded them this time;

• If only the blaze hadn’t started near the bottom of the building, quickly turning the structure into a chimney that funneled impenetrable black smoke up stairwells and down hallways as scores struggled to escape; and

• If only so many seemingly minor factors had not aligned, then 17 people, including eight children, might now be alive.

“I dropped on my knees and started to pray to God and said, ‘Please help me. Please help us,’” said Tysena Jacobs. 68, who was making breakfast in her 15th-floor apartment when acrid smoke started billowing under the front door. “It was like a nightmare.”

Most nightmares, though, are solitary.

This one, all too real, was endured by hundreds spread over 19 floors -- taxi drivers and teachers, the elderly and newborns, many of them west African immigrants. From the outside, their brown block building set on a cement corner appeared anonymous. But inside it was a community, only vertical. That amplified both the damage and the grief.

If only, after an almost eerily mild December, the weekend’s weather in New York had not turned cold. Each winter, some apartments in the Twin Parks tower stayed comfortable while others did not, forcing residents to improvise, said Stefan Beauvogui, a 67-year-old immigrant from Guinea who lives on the fourth floor.

On Sunday, he and his wife had space heaters running in both bedrooms and their sitting room because the building’s heat ”don’t work for nothing.” He said he had complained, but it hadn’t been fixed.

Fathia Touray’s family was the first to arrive at Twin Parks from the west African country of Gambia in the mid-1980s. They and other new arrivals bought space heaters. But sometimes her family had to turn on the oven or boil pots of water to keep the chill at bay, said Touray. She moved out in 2005 but her family remained, forced to flee Sunday’s blaze.

Investigators say an electric space heater set up in one of the bedrooms of a duplex on the third floor of the building had been on for a “prolonged period” when an unspecified malfunction set off a fire around 11 a.m. Soon, flames began billowing from the unit’s windows.

Down the hall, resident Karen Dejesus heard one of the building’s hard-wired smoke alarms going off on the other side of her apartment door. At first, she ignored it.

“So many of us were used to hearing that fire alarm go off, it was like second nature to us,” said Dejesus, 56, who was in the apartment with her son and 3-year-old granddaughter. “Not until I actually saw the smoke coming in the door did I realize it was a real fire and I began to hear people yelling ‘Help. Help. Help.’”

By that point, smoke was spreading fast. When residents of 3N fled, the door to the unit was left open and stayed that way, investigators say, despite New York City law that requires entrances to apartments and stairwells be spring-loaded so they close automatically. The company that owns the building said in a statement Monday that maintenance workers repairing a lock on that door recently had inspected the self-closing mechanism and found it working.

Within minutes, air rushing through the open doorway had sucked flames, soot and thick black smoke into the hall, and then under Dejesus’ door. Before she could stuff towels into the opening, it filled the room, forcing the family to flee down the stairs to the lower floor of their duplex.

When firefighters arrived a few minutes after the blaze was reported, they broke down her door and rushed all three family members out a window onto a waiting ladder.

But while the flames never escaped the third floor, smoke poured into the building’s stairwells and, with a second door left open on a 15th-floor landing, rapidly swept throughout the building. There was little to hold back the blaze in a structure that has sprinklers in its compactor and laundry rooms but none elsewhere.

Glenn Corbett, a fire science professor at John Jay College in New York City, said closed doors are vital to containing fire and smoke, especially in buildings without systems to douse a blaze.

“In a building that doesn’t have sprinklers in it, that has very little fire safety in it, this door became literally life and death for hundreds of people,” he said.

On the ninth floor, Kweesam Wood, a train station cleaner for the Metropolitan Transportation Authority, was in the shower when his 6-year-old daughter Dasanii ran to tell his wife that she smelled smoke. The family grabbed clothes and started down the building’s fire stairs.

But “there were people, glass, bodies,” Fatima Wood says. They only made it down a few flights when heavy smoke forced them to turn around.

The smoke, though, kept rising.

On the 15th floor, Jacobs and her brother rushed toward the door as the air in their apartment took on the odor of soot. But they decided not to open it when they saw plumes of smoke billowing from beneath it.

Four floors up, Renee Howard was startled by a banging at her door. She opened it to find a firefighter, his face covered in soot, standing in a hallway filled with black smoke, asking her if everyone inside was OK. Assured she was safe, he ordered her to keep away from the door and stay near the window and wait for further instructions.

“I didn’t move from there for at least seven hours because I didn’t know where the fire was,” she said.

Staying put kept her safe. But in a building without fire escapes, many residents flooded into the stairways, leaving what refuge they had in their units. Members of another
family who lives on the same floor as Howard died trying to escape the building.

In the chaos, though, others made it to safety.

“I just ran down the steps as much as I could but people was falling all over me, screaming,” said Sandra Clayton, 61, who was able to grope her way through the smoke. Gasping for air outside, she could think only of the wails of those who would not make it.

As residents returned to the building Monday hoping to gather personal items, they despaired pondering all the ways in which the tragedy and its terrible toll might have been averted.

“I saw the firefighters taking the children out. Their lives have been snatched away in a second,” Howard said, breaking into tears. “I don’t want to go back there. It’s such a heartache.”