COMPUTER CHIPS AHOY — U.S. Sen, Charles E. Schumer speaks as a group of local officials and business leaders stand in the background, at the future Wolfspeed chip fabrication facility in Marcy on Monday. Schumer was in town to tout the Mohawk Valley as a potential leader in the industry and urge additional investment in the region by the industry.
(Sentinel photo by John Clifford) 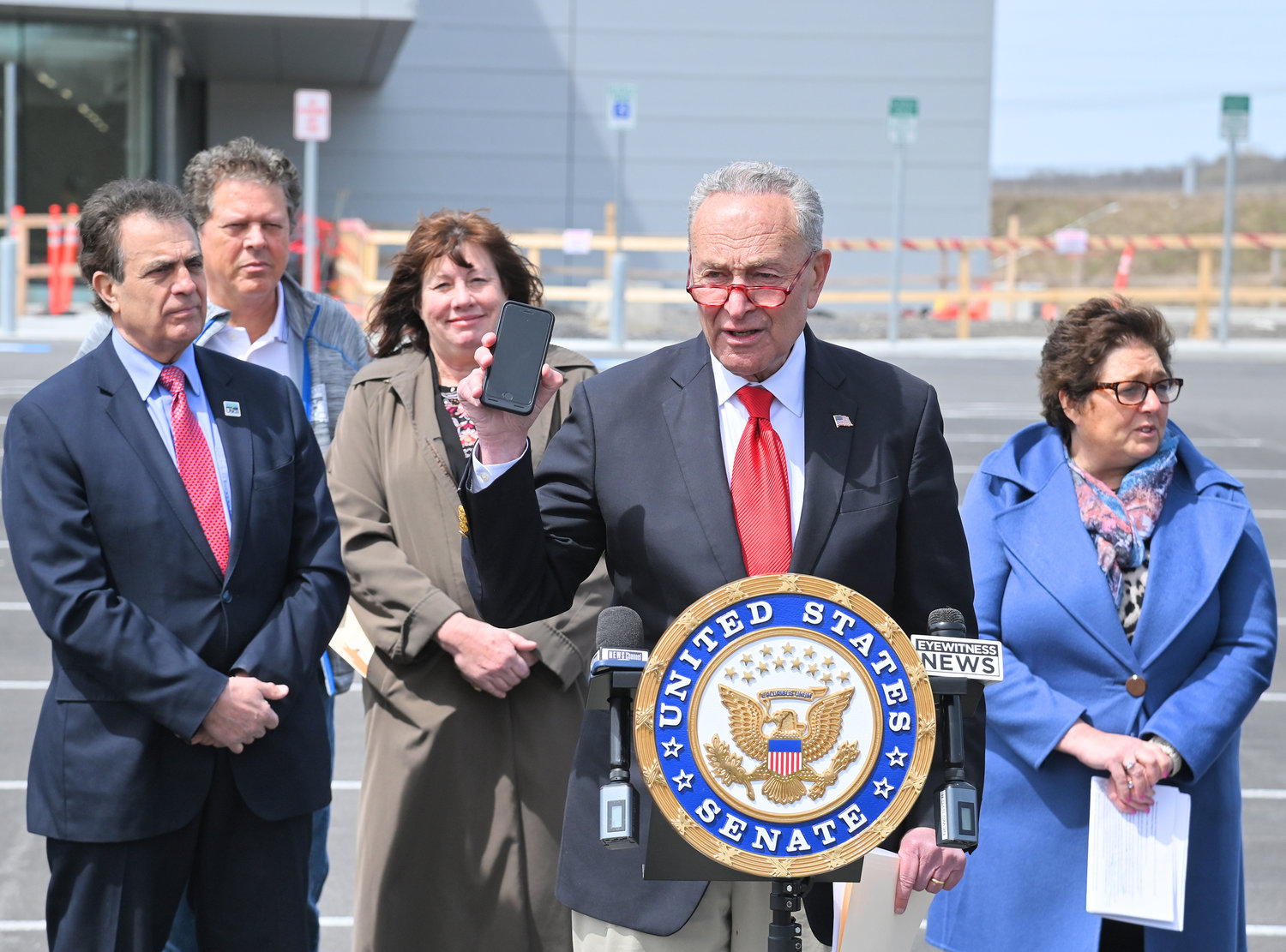 NEEDS CHIPS — U.S. Sen. Charles E. Schumer holds up a smartphone that uses the chips that will be produced at a chip fab facility like Wolfspeed during his press conference in Marcy on Monday.
(Sentinel photo by John Clifford)

Senator Schumer with the lineup of people behind him at his Wolfspeed press conference Monday afternoon.
(Sentinel photo by John Clifford) 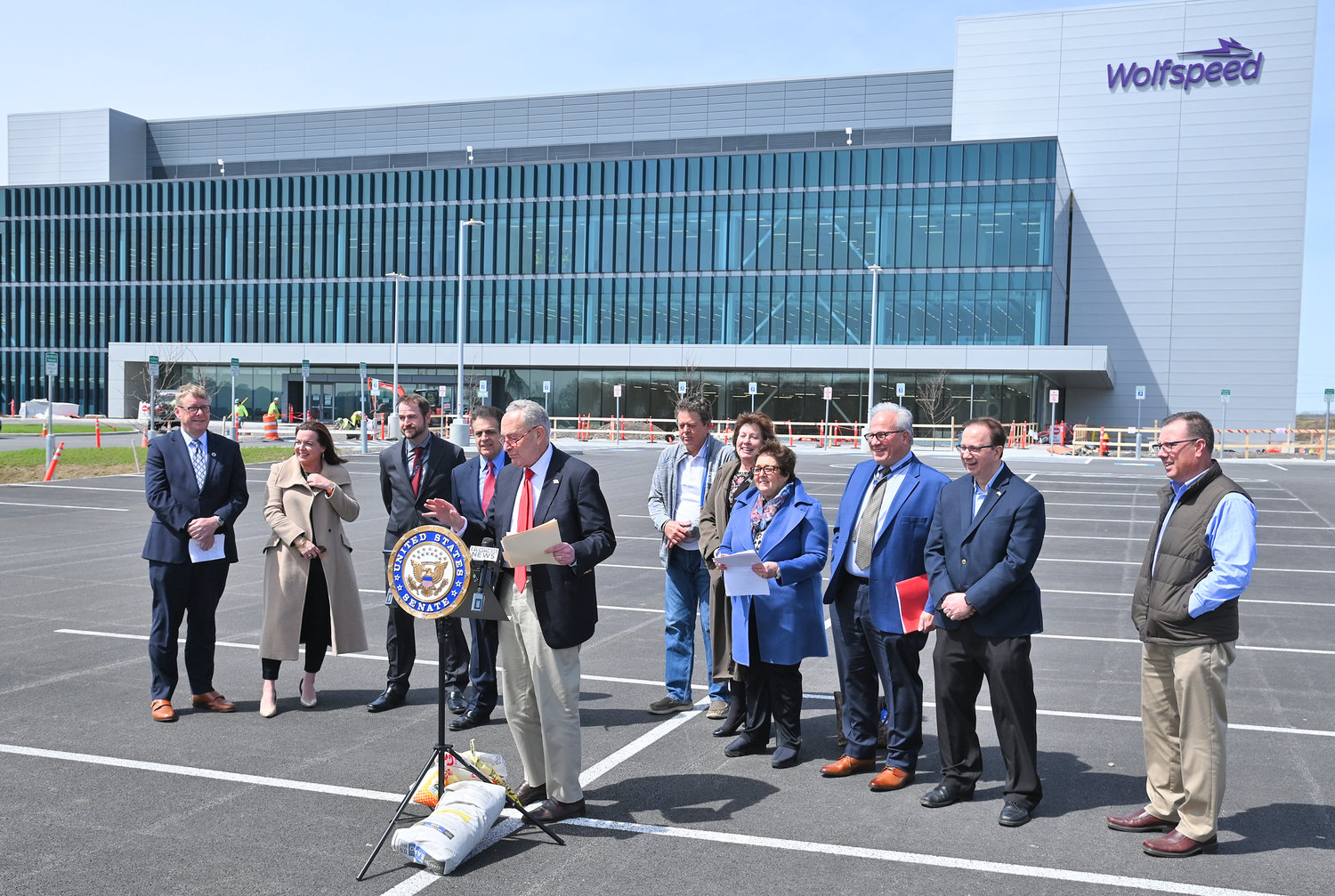 Senator Schumer with the lineup of people behind him at his Wolfspeed press conference Monday afternoon.
(Sentinel photo by John Clifford) 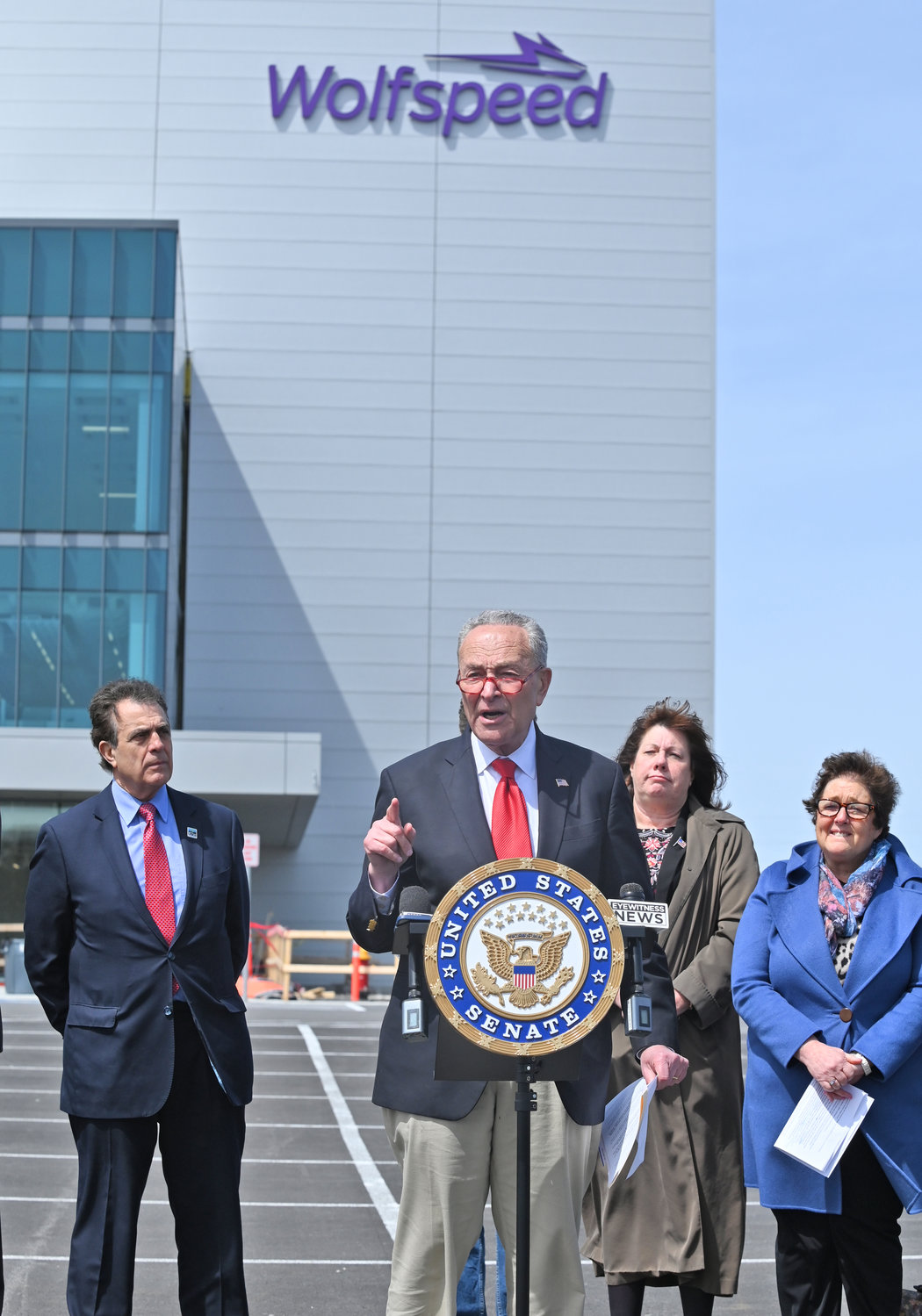 MARCY — Standing in front of Marcy’s now-under-construction Wolfspeed semiconductor fab on Monday, U.S. Sen. Charles Schumer, D-NY, called for investments to continue to be made in the emerging Mohawk Valley region’s tech corridor.

Schumer’s comments came as Wolfspeed prepares to launch production at its $1 billion chip fab. A ceremonial grand opening has been planned for next week at the facility which promises to create 600 jobs by 2029.

Despite Wolfspeed’s ramp up, Schumer said he wants to see even more growth of the region’s semiconductor industry and will double down on his efforts to bring a second semiconductor plant to the Mohawk Valley.

Schumer hopes to achieve this with a push to secure up to $100 million for Central New York and the Mohawk Valley through the Economic Development Administration’s Regional Challenge grant, funding that would support further expansion efforts at the Marcy Nanocenter and help make the entire region a global tech and semiconductor manufacturing hub.

He also touted his U.S. Innovation and Competition Act as a boost for Marcy’s efforts to land more companies, bring jobs back from overseas, and ensure future technology is made in Upstate New York, which could tap into an available $52 billion in federal incentives that is available for boosting domestic semiconductor manufacturing and research and development.

All of this in an apparent response to a global computer chip shortage which has made it harder for consumers to get their hands on cars, computers and other modern-day necessities, elected officials and stakeholders say.

At that meeting, DiMeo said the coronavirus pandemic brought to light the issues of not enough semiconductor products being produced to meet global demands, creating a mis-alignment in global supply.

Schumer said currently, only about 6% of semiconductor chips are made in America. “That is very dangerous” and something that needs to change, he said. “What we want to do is invest in science.”

Adding to that sentiment, Schumer said congress is looking to boost chip manufacturing and research in the United States with billions of federal dollars.

Both the House and the Senate have passed major legislation on the matter. The bills are one of the final opportunities before the November elections for lawmakers to show they are addressing strained supply chains. But there are big differences between the two bills. Democrats will need support from at least 10 Republican senators to get a bill signed into law.