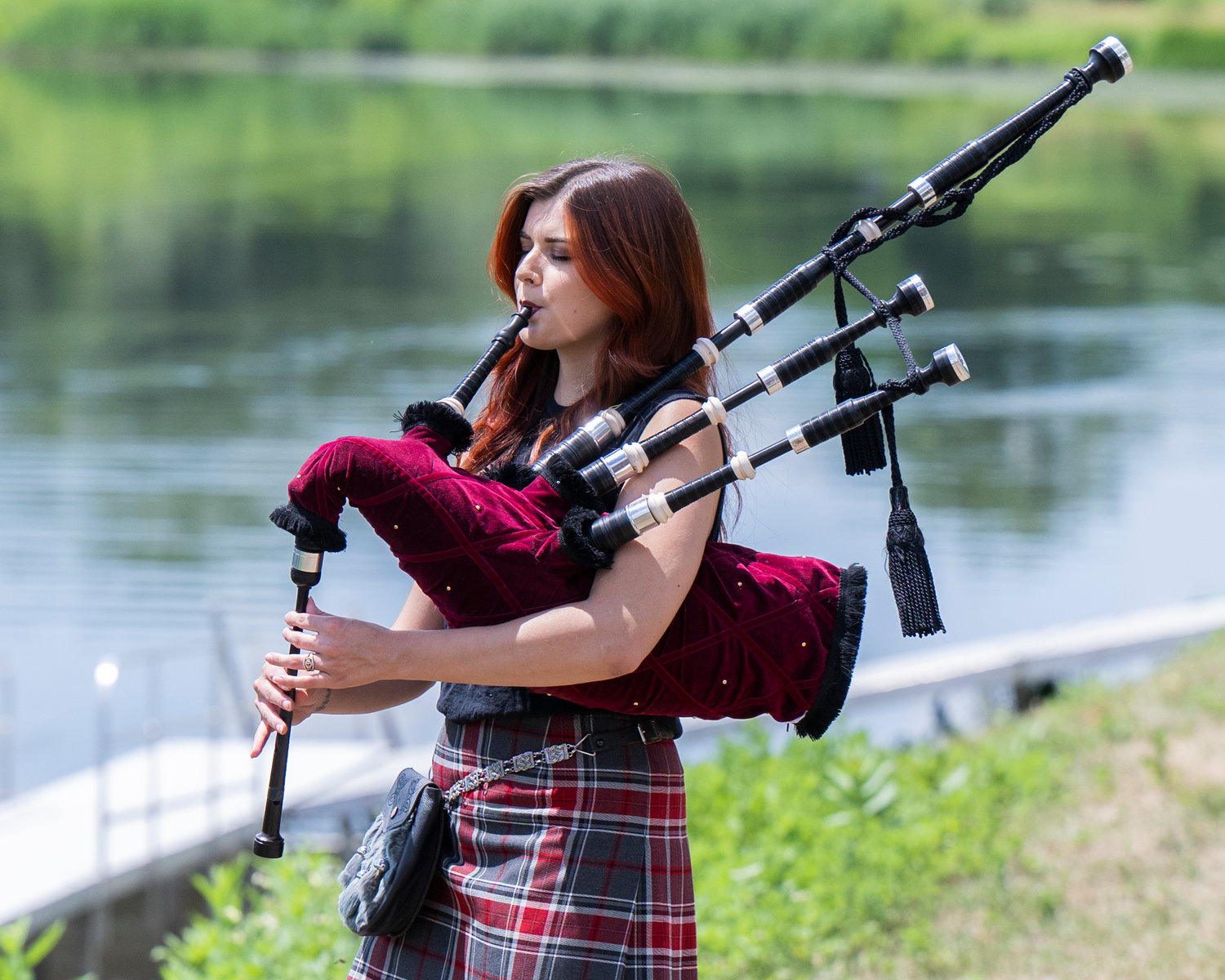 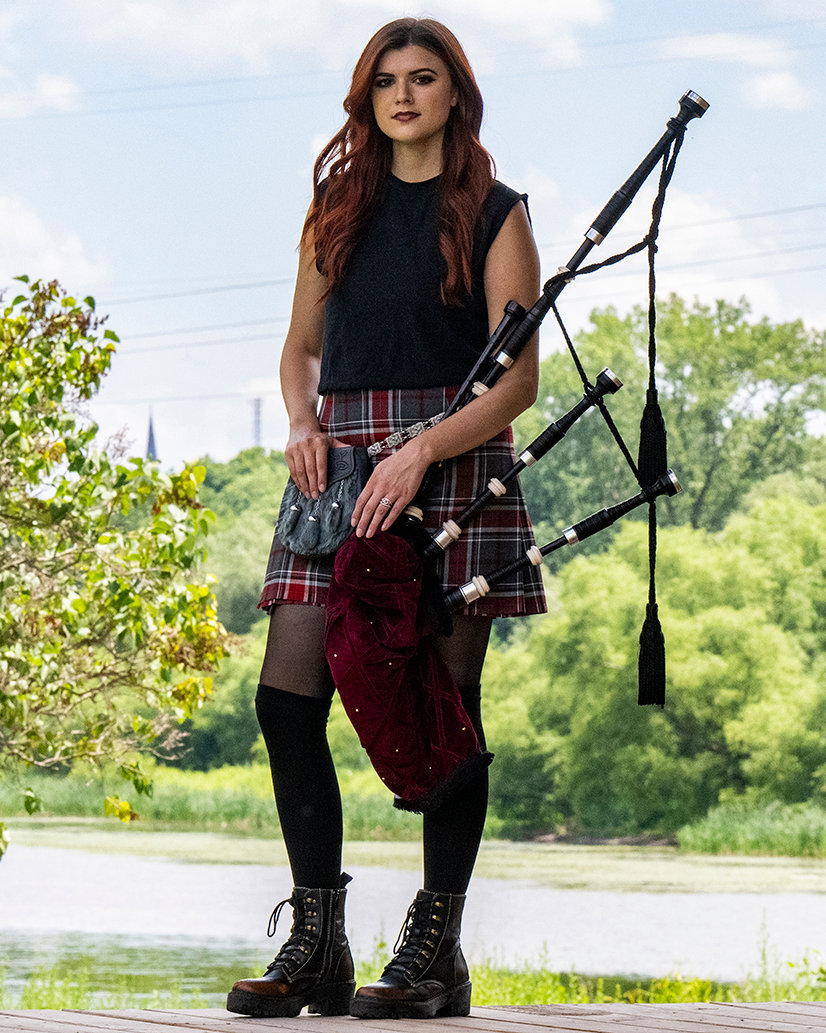 Aly the Piper stands on the stage in Freedom Park in Scotia in this July 2022 photo.
(AP Photo/Peter R. Barber/The Daily Gazette) 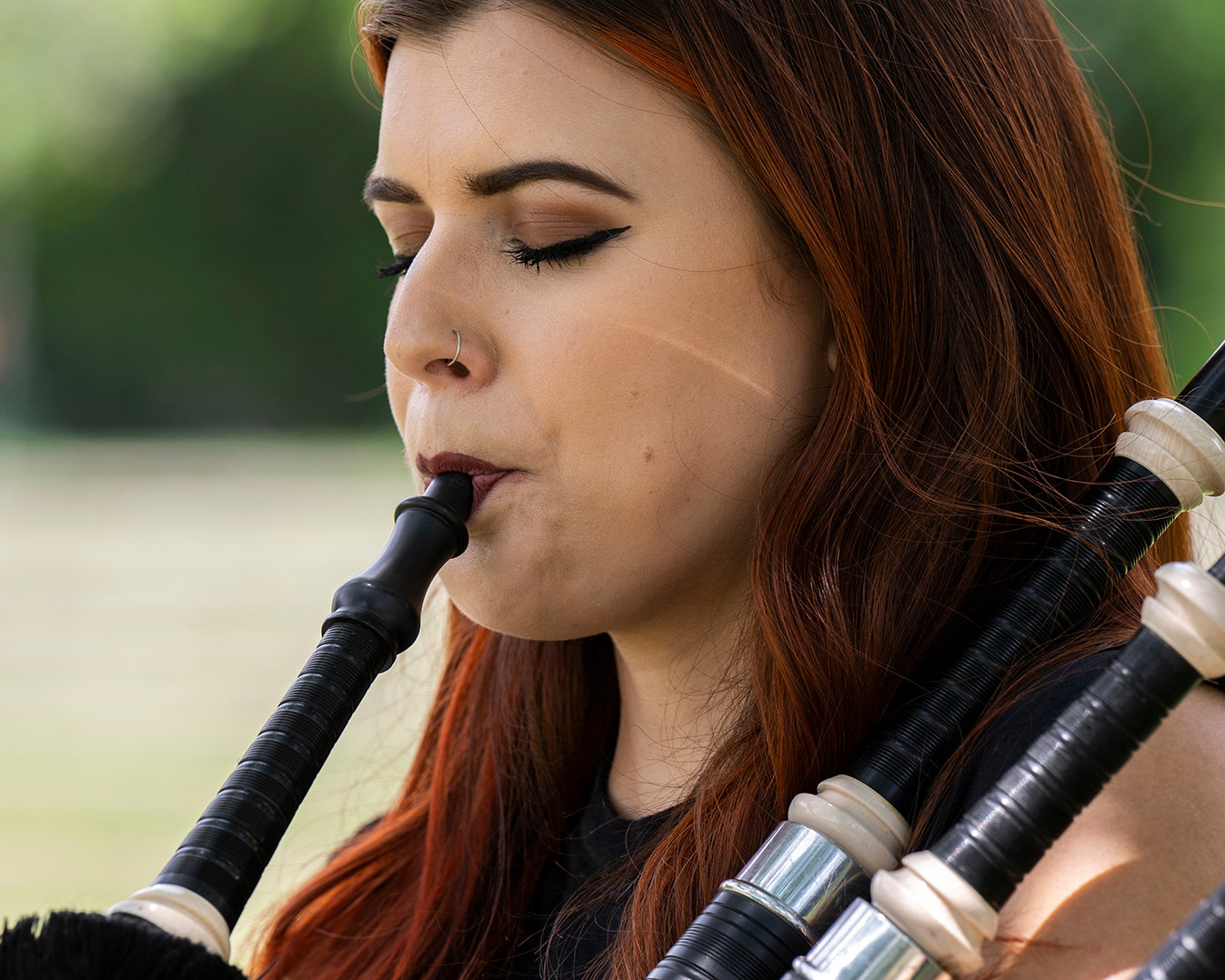 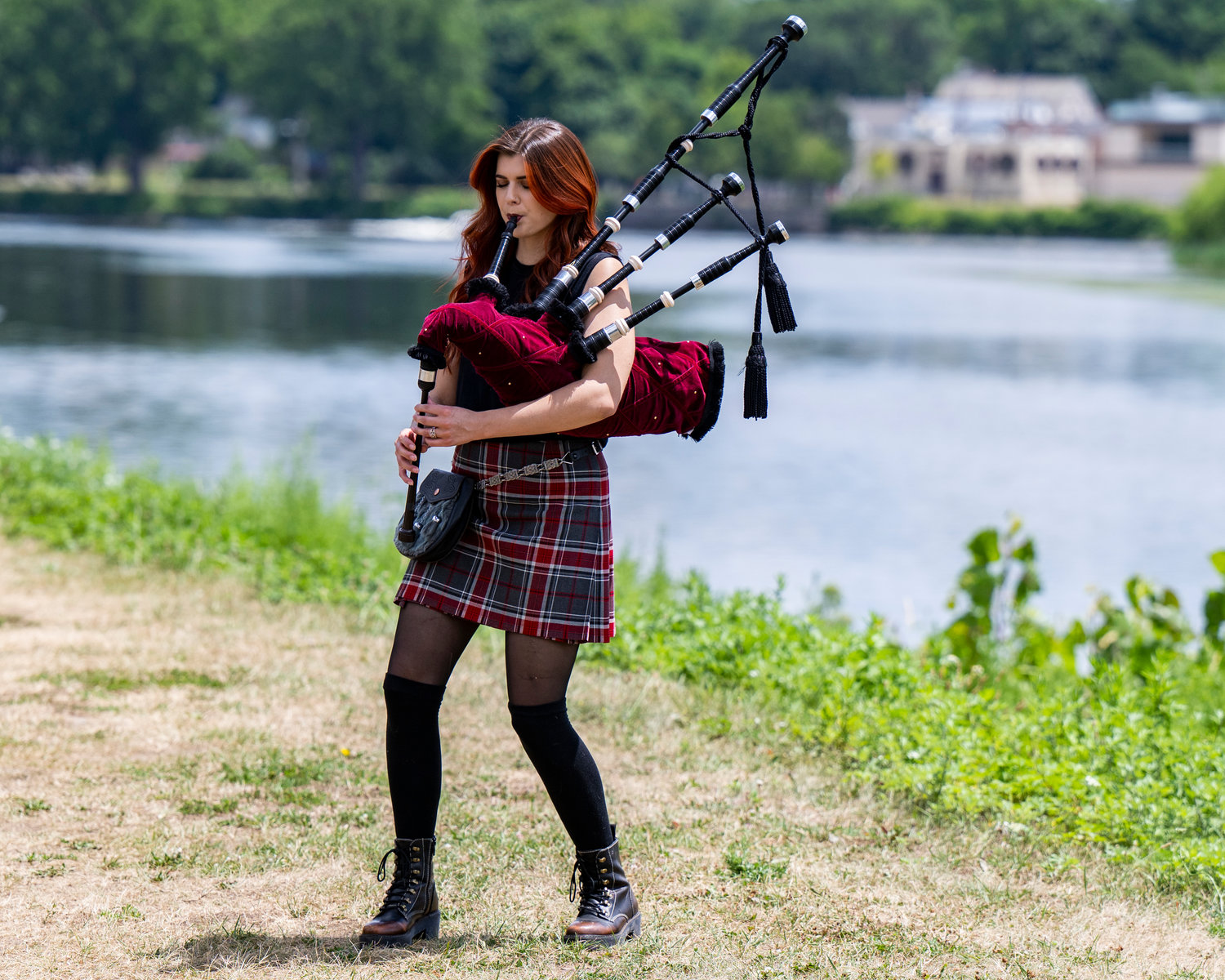 SCHENECTADY  — Social media platforms like TikTok and Instagram have been transformed from regular entertainment apps into opportunity.

Just last weekend, Ally Crowley-Duncan, a resident of Schenectady, hit the monumental benchmark of 1 million followers on TikTok for her music covers.

Her niche? Blending the unconventional woodwind instrument with diverse styles of music like a Metallica rock song or trendy pop music.

“I would be that weirdo kid in my room listening to pop songs and trying to play along to make different sounds,” said Crowley-Duncan, a 2014 Shaker High School graduate. “I literally did exactly what I do on the bagpipes now. It’s like I’ve always wanted to do this.”

Her account “Ally the Piper” has now become the most followed bagpiping page on TikTok.

Coming off her 1-million-followers high, her musical collaborator Mia Asano, a Boston-based electric violinist and content creator, will have Ally as a special guest during her debut show at the downtown Boston venue Warehouse XI on August 4 and 12.

“I’ve been friends with her pretty much the whole time I’ve been on Tik Tok. We both inspire each other,” Asano said during a phone interview. The two talents, Crowley-Duncan and Asano, caught traction on social media around the same time and - among the chaos of learning how to conquer the TikTok algorithm, content making, brand deals, hate comments, and burnout - they turned to each other for guidance and support.

Their friendship is an added bonus. “I absolutely love her,” Asano said. “She came out and visited and we shot a bunch of videos together. The people on Instagram and Tik Tok just loved us together and the video started going viral. And we were like, well, obviously we have to continue this. We have so much chemistry, both as friends and as musicians. We love playing together.”

The coronavirus outbreak canceled the pipers’ touring in March of 2020 and Crowley-Duncan couldn’t plan on performing. She lost her retail job at Lush in Crossgates Mall because of COVID circumstances and turned to social media for a solution.

She posted Facebook videos playing Celtic melodies to get her art seen, but her contemporary covers on TikTok is how posting became a full-time job.

Some of her top viewed videos feature her playing along to popular tunes like DragonForce’s metal rock song “Through the Fire and Flames”, which yielded around 6.2 million views.

Her cover of the Game of Thrones song “The Bard in the North” accrued around 4.4 million views and Avicii’s “Wake Me Up” totals about 3.2 million views.

Streaming revenue and social media engagement alone earns her around $2,000 to $3,000 a month. The key to navigating the TikTok algorithm, she said, is keeping scrollers engaged through likes, shares, comments and views.

“I don’t know what’s going to be engaging until I see how other videos do. So, in a way, I’m always one step behind. But that’s I think how I’ve been able to take something so niche and make it grow as far as it has. I haven’t been posting the same type of content the whole time. I am always trying to adapt and evolve my content,” she said.

She creates animated stickers for her online merchandise store, which she launched amidst her TikTok career. Merchandise sales are a big part of her bank account, Crowley-Duncan said, investing a lot of the money back into recording and music equipment, props for content, and larger merchandise launches.

A new computer and two years later, her brand is a trailblazer for aspiring young musicians who may not fit the regular mold of the music industry today.

I go to concerts and I perform really cool stuff on stage with different, unique musicians. That’s how I want people to see the bagpipes.”

Crowley-Duncan is determined to show the “cool side” of bagpipes, one video at a time.

“My favorite comments I get are ‘Wow, I hated bagpipes until I watched this’ or ‘until I came across your account’. That’s what I want out of this,” Crowley-Duncan said.

On the side, Crowley-Duncan taught private lessons for bagpipes, voice, and piano during her time studying at Edinboro University of Pennsylvania - one of the only colleges that permit “bagpipes” as a major - to students through community centers and the local Guilderland and Scotia music academies.

However, her teaching gig brought up unforeseen complications surrounding her health. Although Crowley-Duncan has the reputation of being clumsy, suffering many head and bone injuries during her childhood, she began experiencing unexplainable pain in her fingers during piano sessions.

In December last year, she was diagnosed with rheumatoid arthritis and Ehlers-Danlos syndrome, causing her joint stiffness and inflammation.

“With those two things combined, I am trying to be careful with my health and really protect my hands and joints,” Crowley-Duncan said. “The fun and amazing thing about bagpipes is there is no pressure. All I do is lift my fingers.”

New diagnoses also included postural tachycardia syndrome or PoTS, a blood circulation disorder, which explained the dizziness and fatigue she felt during hot days at parades or concerts.

“COVID was the time that I decided what I need to do mentally and physically to survive in this world and I was like, ‘I need to take better care of my physical health,’” Crowley-Duncan said.  “Which is another reason why social media is so great for me.”

Beyond her TikTok fame, Ally the Piper is an established and well-known musician in the “real world” too.

She was able to sing before she could talk, according to Ally’s biggest fan and mother, Justine Crowley.

She took piano lessons at age seven and her instrument palette grew the more her curiosity piqued. She learned up to six instruments before the bagpipes.

“I knew I wanted to play something out-of-the-box,” Crowley-Duncan said.

The pipes were formally introduced to her after her legal adoption by her stepfather at age 12, who had strong Scottish roots tied to his family. In taking on the Duncan name, her grandmother found it important to show the family’s tartan, crest, and Scottish ancestry.

Her inquisitive nature led her to the Internet where she researched more of the Duncan lineage, Scotland, and its culture - and, eventually, the bagpipes popped up.

“They were played for the royal courts. They were played for the royal families and every queen has had a bagpiper,” Crowley-Duncan said. “I remember watching a Youtube video about Scottish ancestry and they had a bagpipe show up every now and then. I couldn’t figure out how it worked just by looking at it. I was like, ‘That’s four different instruments. Four different instruments! How do I do that?’” Crowley-Duncan said.

Crowley remembers the day her daughter noticed the bagpipes at an Albany parade like it was yesterday.

“We had a deal. I paid for the lessons and travel for competitions and she gave up her summers to work babysitting so she could buy her own bagpipes,” Crowley said. “My mother was furious with me for giving in. But when you have a child with a gift, you don’t say no.”

Crowley found Albany’s Capital District Youth Pipe Band, enrolled Crowley-Duncan in the program, and the rest was history. She started competing around 2011 at the fresh age of 15 and did it heavily for about four years. As a high school student, she took up every music extracurricular that welcomed her: choir, select choir, jazz band, jazz ensemble, wind ensemble, orchestra, and her bagpipe band which played outside of school.

Together, mom and daughter traveled down the east coast and then the west coast, winning medal after medal in solo and group competitions. They eventually traveled internationally and soon enough, made their way to the home-country of the pipes, Scotland.

“A lot of the motivator to go compete was honestly the social aspect,” Crowley-Duncan said. The bagpipe community is very niche, Crowley-Duncan explained, and with the amount of time she dedicated to competing, her teammates as well as competitors turned into friends.

But a time of celebration also became a learning experience for the young piper too.

“Around the same time I won the Worlds, there were tweets going around from people in high school saying bagpipes were the most annoying instrument in the world. They definitely knew I played,” Crowley-Duncan said.

In 2014, Crowley-Duncan earned 6th in the world as a soloist - proving to the haters that she and her bagpipes were not going anywhere.

“I always told Ally that high school just isn’t fair, but you wait - you are going to find your niche,” her mother said.

“The best advice I ever got was to do what you like, post it, and whatever your audience responds to - do more of that. I was like, ‘Oh, like that’s such good advice.’ Because then you’re always doing stuff that is authentic to you, but then you’re also responding to what your audience enjoys so you’re able to kind of keep the momentum up,” Asano said and credits fellow Youtuber and cellist, Cremaine Booker, for the wise words.

The bagpiper is a strict believer in authenticity herself.

“The decisions that you make as a creator are the platform that you’re building for yourself. That’s not me trying to scare people or deter them away. But when you make a video, pay attention to the community you are building and decide if that is something you want to keep doing or not,” Crowley-Duncan said. “There needs to be a moment you have with yourself where you figure out what your core values are, as a creator and a person.”

Despite the hate on social media, more bagpiping content is guaranteed to continue and Crowley-Duncan looks forward to meeting the people who support her content online, face-to-face.

“I’m not grateful for the pandemic. I wish it never happened, but I’m grateful for all the things that have come out of it for me. And I’m excited that it’s less intense so now I can go and perform live.”