Sauquoit Valley junior shares her story to help others 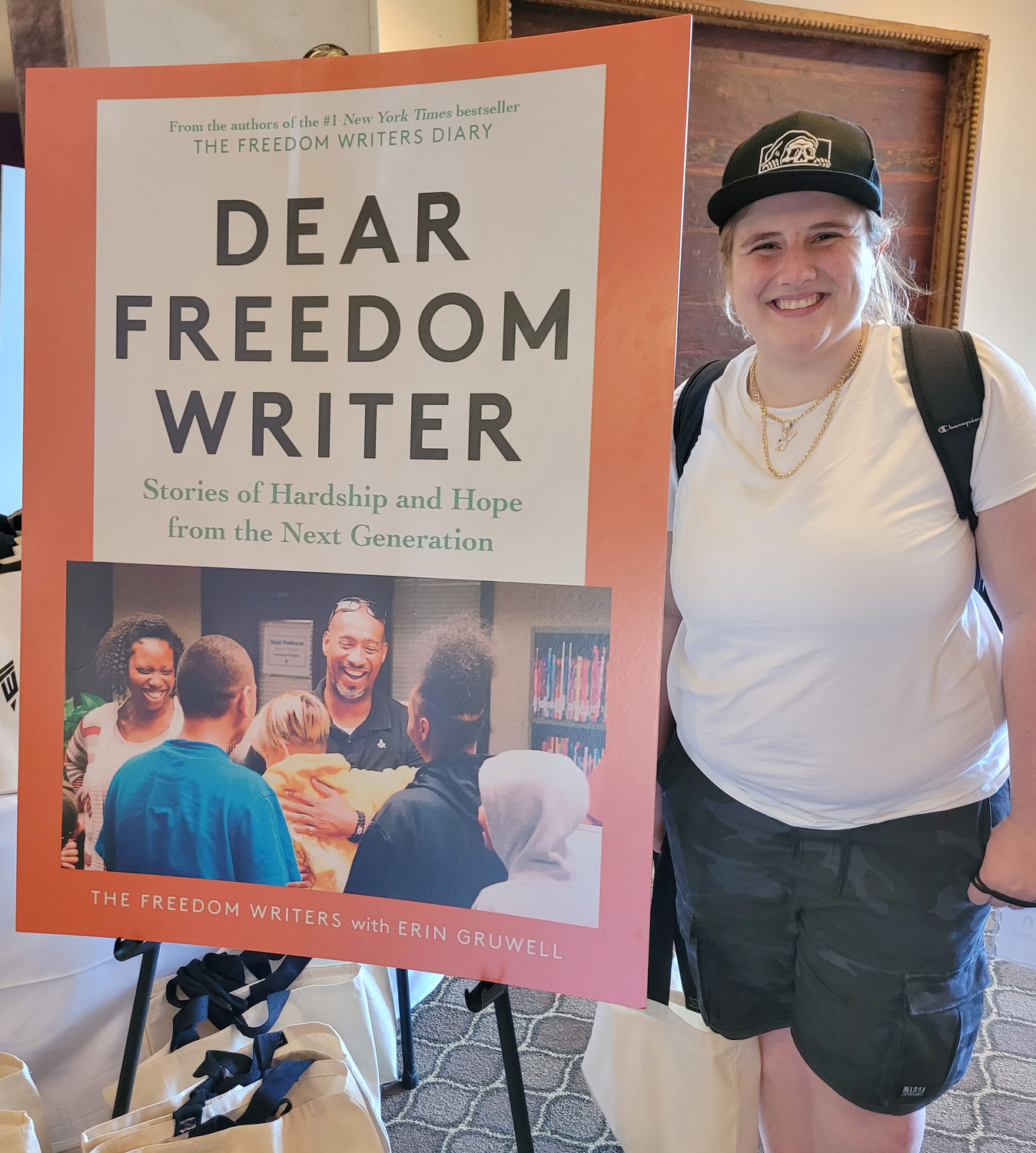 Sauquoit Valley High School junior Jadyn Land was chosen to share her story about bullying and thoughts of self-harm in the new book, “Dear Freedom Writer: Stories of Hardship and Hope from the Next Generation,” published by The Freedom Writers Foundation. A special event will be hosted for Land on June 4 at Sauquoit Valley Middle School where she will sign copies of the book.
(Photo submitted)
Posted Friday, May 27, 2022 8:30 am
Nicole A. Hawley
Staff writer
email / twitter

SAUQUOIT — A Sauquoit Valley High School junior is spreading her anti-bullying message through her own personal story, which was published in the latest book from the Freedom Writer Foundation, founded by teacher and author Erin Gruwell, whose story was made famous through the 2007 film, “Freedom Writers.”

Jadyn Land was brave to share her personal struggles about self-harm so that her peers wouldn’t feel isolated or alone. She had been familiar with Erin Gruwell and her Freedom Writers Foundation since they first visited her school when she was in fifth grade. That’s when she was a student of English Language Arts teacher Tammy Purrington, who has encouraged Land to write down her story.

“I had known about Freedom Writers since fifth grade because they came to our school, and we learned about them in Mrs. Purrington’s class,” Land recalled. “I always thought they were cool. Then in eighth grade I was going through a lot and I was connected through Mrs. Purrington with the Freedom Writers — I spoke to them in eighth and ninth grades, and I helped host an event for them.”

When Purrington learned of an opportunity for Land to submit her story to the Freedom Writers, she encouraged her student to get involved. Land submitted her writing to be included in the Dear Freedom Writer book.

“I had to write a draft of my story in order to be part of it, and a month or so later, I heard back that it got accepted” for the book, the junior said. “I worked on that from the August before my sophomore year all the way to this past November or December. I sent it to them, and they put it into their book.”

Now at age 17, Land is not only a published author, but she also got the opportunity to meet with Gruwell and some of the original Freedom Writers whose story was portrayed in the movie, “Freedom Writers,” starring Hilary Swank and Patrick Dempsey. She recently took the trip to Long Beach, Calif., where she was involved in the “Toast for Change,” and signed more than 500 copies of the new book.

While considering a future career in law enforcement, Land said she felt it was important to open up and share her story in order to bring awareness to bullying.

“Telling my story was very important to me. My story was about self-harm and suicidal thoughts, and that’s a big message to get out there,” the student explained. “You can walk into a middle school or high school and see a bunch of kids and whether you know it or not, a lot of kids are having these thoughts but they just don’t talk about it. Self-harm is stigmatized and not talked about a lot. I wanted to share that it’s not something to be ashamed of so other kids knew there were others out there going through the same thing, who have made it.”

Mrs. Purrington was the main force behind organizing all the June 4 festivities at the middle school, and middle schoolers have volunteered to put different stations together for awareness on different topics. There will also be raffles to raise money to help bring Gruwell and her Freedom Writers back to Sauquoit. Locally, Land will serve as an ambassador for the Freedom Writers Foundation.

On Saturday, June 4 from 6-9 p.m., Sauquoit Valley Middle School will host, “An Event By the Future Writers: Writing For Change.” Sauquoit Valley School District is inviting students from grades 6-12 to the middle school where there will be stations set up that will foster self-esteem, perseverance and several of the themes connected to not only Jadyn’s story, but the entire Freedom Writers book.

The second hour will spotlight Land, who will lead the audience in, “The Line Game,” which will foster a sense of empathy as participants see that there are others who are “walking in the same shoes” as they are. Land will then read her story aloud and take questions from the audience.

“I always looked up to Freedom Writers, and now to be one of them, it’s weird to process, but really cool,” said the 17-year-old. “Now I would go with them if they went to any Sauquoit schools — I’ll always be an ambassador.”

Purrington said she is proud to celebrate her former student and her journey.

“Jadyn has shown so much courage in sharing her personal struggles with the world. Celebrating her doing this will send a message to other young people that it is OK to struggle, and it is OK to ask for help,” said the middle school teacher. “I truly feel that this story is one that so many young people can connect to.”

She said, “Teaching in a middle school after a pandemic, I can tell you that so many of our kids are struggling now, and they need to know that they are not alone, and that there is hope. Jadyn’s voice is truly speaking for those who have not spoken up for themselves already.”

Dear Freedom Writer was released at the end of March and is a collection of 50 letters written by young adults from around the world who share their personal stories and then ask for advice on moving forward in their lives. Each letter is followed by a letter from the Freedom Writers and Freedom Writer Teachers, containing real advice from those who have shared that same experience or something very close.

The book is a follow-up to the Freedom Writers first book, “The Freedom Writers Diary.” It includes the personal stories from the students in Gruwell’s class in Long Beach, Calif. back in 1994. These students were labeled “unteachable,” but Gruwell saw something different. She felt that her students needed two things: hope and a voice.

Through literature such as The Diary of Anne Frank and Zlata’s Diary, students heard their own story reflected in the words on each page. By having students write in their own journals, they were able to learn that writing is a powerful form of self-expression that could help them deal with their past and move forward.

“Having been close with Jadyn while she struggled through middle school and into high school, I am so proud of her for putting her story out in the world in order to help other students,” Purrington said. “She is determined to do all that she can to let others know that they are not alone in their struggles and that they will come out the other side of it stronger than ever. She has been spending time with my middle school students who have read her story, and already she is mentoring students who look to her for advice and hope. She is changing the world, one reader at a time.”