“People expect artists to be eccentric, and I try not to disappoint them.” An accomplished artist and educator, Sandra Z. De Visser has left a legacy of influence on the next generation of … 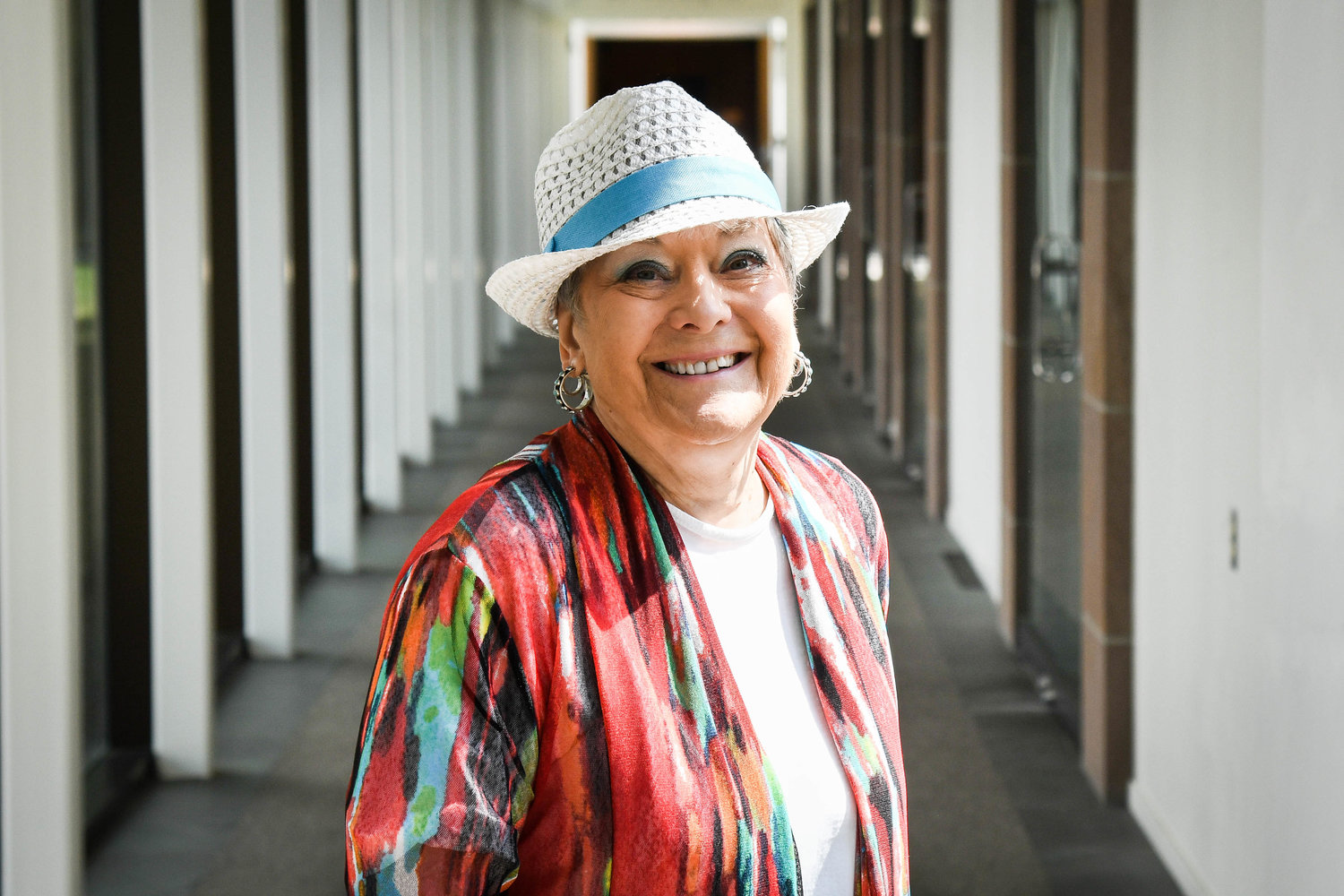 Sandra Z. De Visser is a long-time Community Arts Education painting instructor in the Mohawk Valley. During her educational career, she has been an adjunct instructor of history at Utica University, SUNY Polytechnic, and Mohawk Valley Community College. Until her retirement at the end of 2021, she was an arts instructor at Munson-Williams-Proctor Arts Institute since 1980 where, among other classes, she developed and taught the rigorous curriculum for Teen Drawing and Painting, a cornerstone of the school’s offerings for young artists.
(Sentinel photo by Alex Cooper) 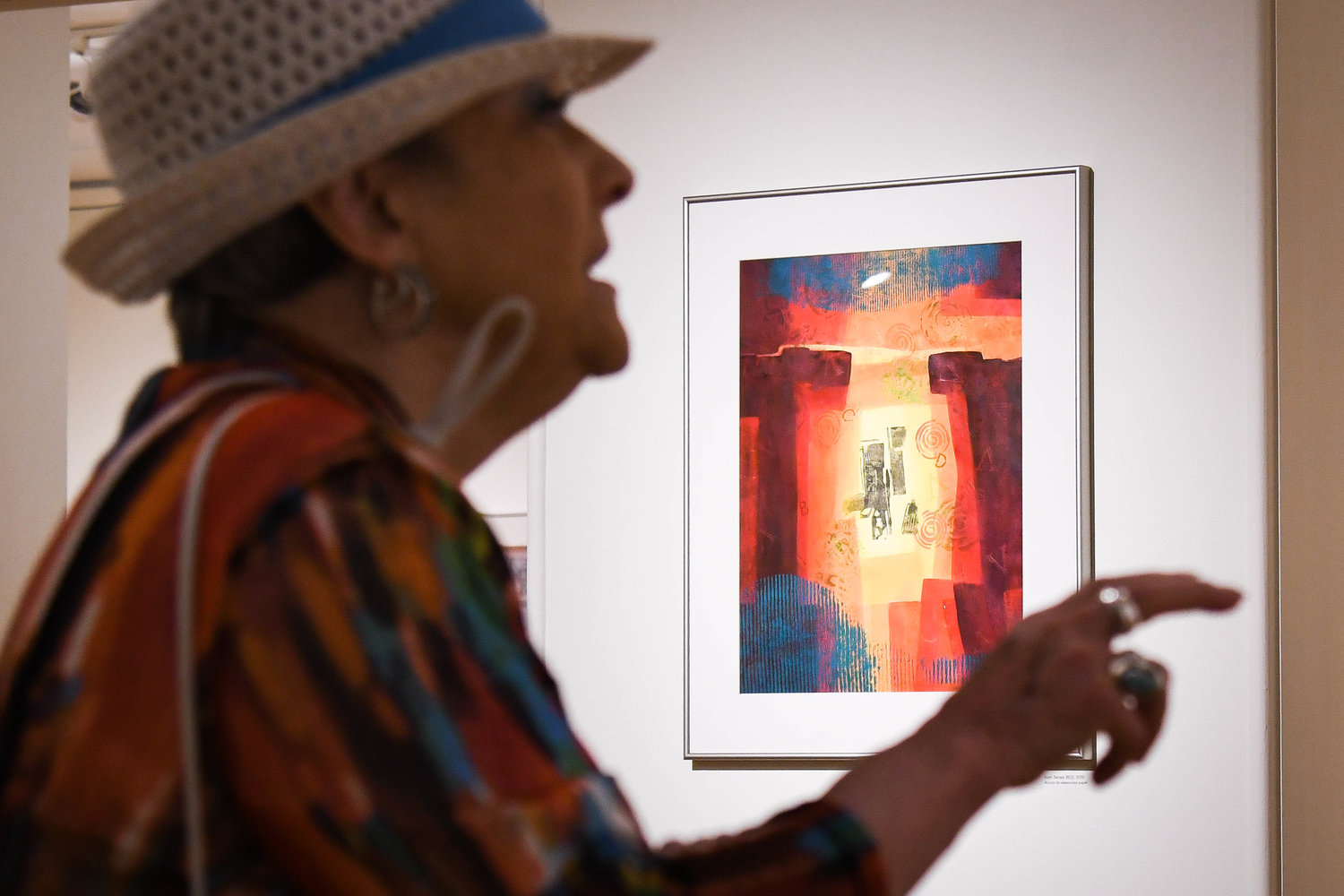 Sandra Z. De Visser talks about her exhibition celebrating her 40-plus year career as an artist and educator in the Mohawk Valley while at Munson-Williams-Proctor Arts Institute in Utica.
(Sentinel photo by Alex Cooper) 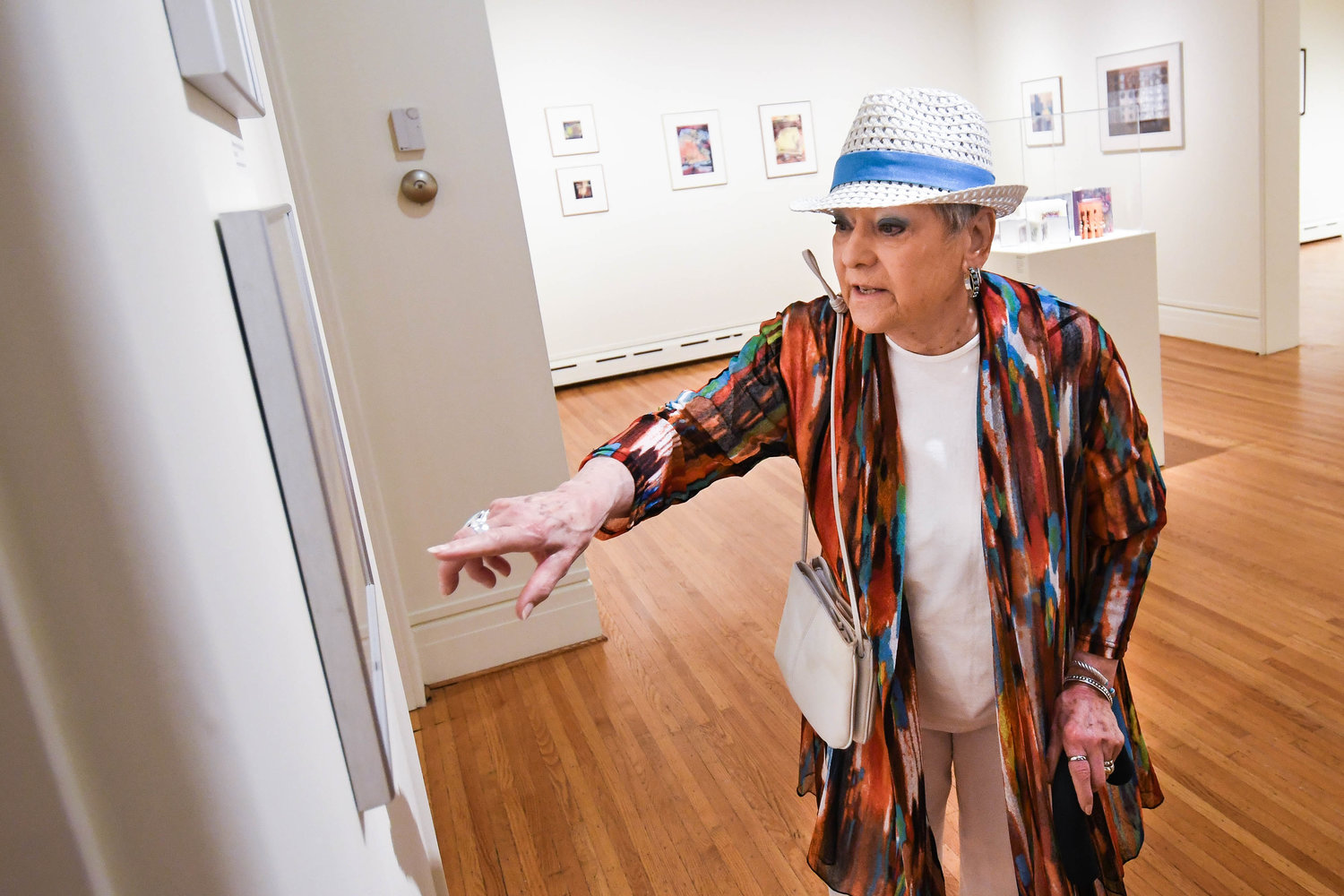 Sandra Z. De Visser talks about a piece of work that is included in her exhibition at the PrattMWP Gallery in Utica.
(Sentinel photo by Alex Cooper)
Previous Next
Posted Wednesday, August 3, 2022 6:33 am
Jack Elliott, Daily Sentinel intern

UTICA — “People expect artists to be eccentric, and I try not to disappoint them.”

An accomplished artist and educator, Sandra Z. De Visser has left a legacy of influence on the next generation of young artists as a long-time painting instructor at Munson-Williams-Proctor Arts Institute, 310 Genesee St.

De Visser, who taught her last classes at the arts institute in the fall semester of 2021, is now being honored by an art exhibition at MWPAI. The “In Retrospect” exhibit is on view through Aug. 14, with gallery hours of 10 a.m. to 5 p.m. Tuesday through Saturday, and noon to 5 p.m. Sunday. The exhibition showcases several of the artist’s works from her 41-year career as an arts educator.

“She taught almost every semester. We haven’t yet found someone to fill those shoes,” said Audrey Taylor, Community Arts Education director at MWPAI of De Visser. Taylor added that it was a privilege working with the instructor and artist and that she always ensured a rigorous curriculum for her students.

De Visser said that the process of retiring has been bittersweet.

“It's been overwhelming. The School of Art had a lovely reception for me and I was just thrilled,” she said. “I will miss my students most. I will also miss what one of my former students referred to as the ‘sacred space’ of the art studio.”

Throughout her career, De Visser played many roles in the local art scene.

During her time as an educator, she made hundreds of pieces of art, including several series that are on display at Munson-Williams-Proctor Arts Institute.

Much of De Visser’s early artwork has historical themes, as she worked as a professor of Western Civilization early in her professional career. She has a series based on the Gilded Age, Mayan civilization, Ancient Egypt, Medieval Catholicism, and the Holocaust.

Her historical series include 1993’s Pharaonic Series: Osiris, 1995’s Maya Series: Mayan Glyph VIII, and her From The World Series, that features biblical-themed art De Visser created when she exhibited her work at her sister’s church.

De Visser’s Urbania Series was created to compliment a show she shared with her photographer husband and a series he shot of window fronts in New York. And her mixed media works included in the Lunar Series have shown at RACC.

The Kristallnacht Series, which is based on the events of the Holocaust, is what De Visser considers to be her “most significant body of work.”

The series displays artworks based on “The Night of the Broken Glass” in which Nazi forces violently persecuted Jews and destroyed their synagogues and businesses on the night of Nov. 9-10, 1938. The series also features works based on several Nazi concentration camps.

“The Night of the Broken Glass was just the beginnings of the horrors that people endured,” said De Visser. “It is named that because of the shards of shining glass that were left in the wake of the Nazis as they tore through Jewish areas.”

The series was made using subtractive monotype and chine collé techniques, giving it a dark, severe look. The Kristallnacht Series is part of Munson-Williams’ permanent collection.

De Visser reflected on the spiritual side of art, stating that it serves a very important purpose.

“God created us in his own image and God is the ultimate creator,” said the artist. “So the act of creating something from nothing as we do in art is truly a sacred process.”

De Visser has used a plethora of different techniques in her career to aid in her creative process. Her works feature techniques of printmaking, monotype, embossment, book making, and watercolor. Together, her techniques give her art an abstract look, that De Visser said she finds more entertaining than realistic works.

“Abstract art lends itself to personal interpretation, where everyone brings their own viewpoint,” she stated. “In order to communicate as an arts instructor, I had to teach my students a vocabulary to better interpret art.”

As an instructor at MWPAI, De Visser taught adult classes and developed the teen drawing and painting program.

She said she loved instructing teens and used a two-tier system in order to teach them both art fundamentals and unique creative processes. The classes educated students ranging from grades 7-12.

Luke Towne, studio technician and Community Arts Education instructor at MWPAI, said he was a student under De Visser in the teen art classes, which made a large impact on his career.

“I was a student of Sandra’s about 10 years ago when I was in high school,” said Towne. “At the time, I was just discovering an interest in art, which is what drew me to the teen art class. And I continued to do the class for a total of three years. Sandra laid the fundamental groundwork for my knowledge of art.”

Towne is the second of De Visser’s students who is employed at MWPAI.

As for De Visser’s exhibition at MWPAI, “We are lucky that she is able to show her work with us after such a storied career,” said Taylor.

All of the work in the exhibition, except the Kristallnacht Series, is for sale.