Visitors to the Rosamond Gifford Zoo’s elephant enclosure will be seeing double thanks to the arrival of male Asian elephant twins. 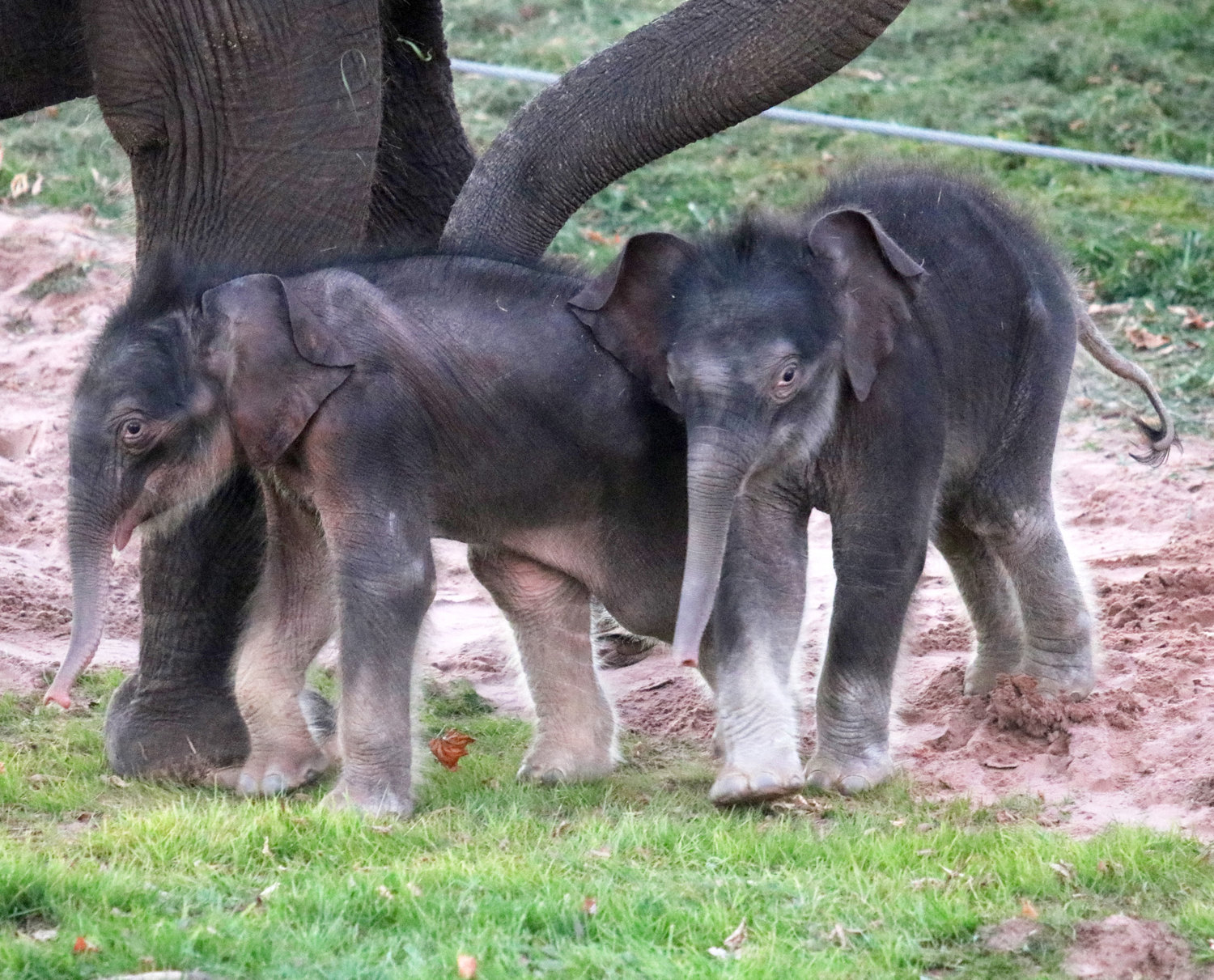 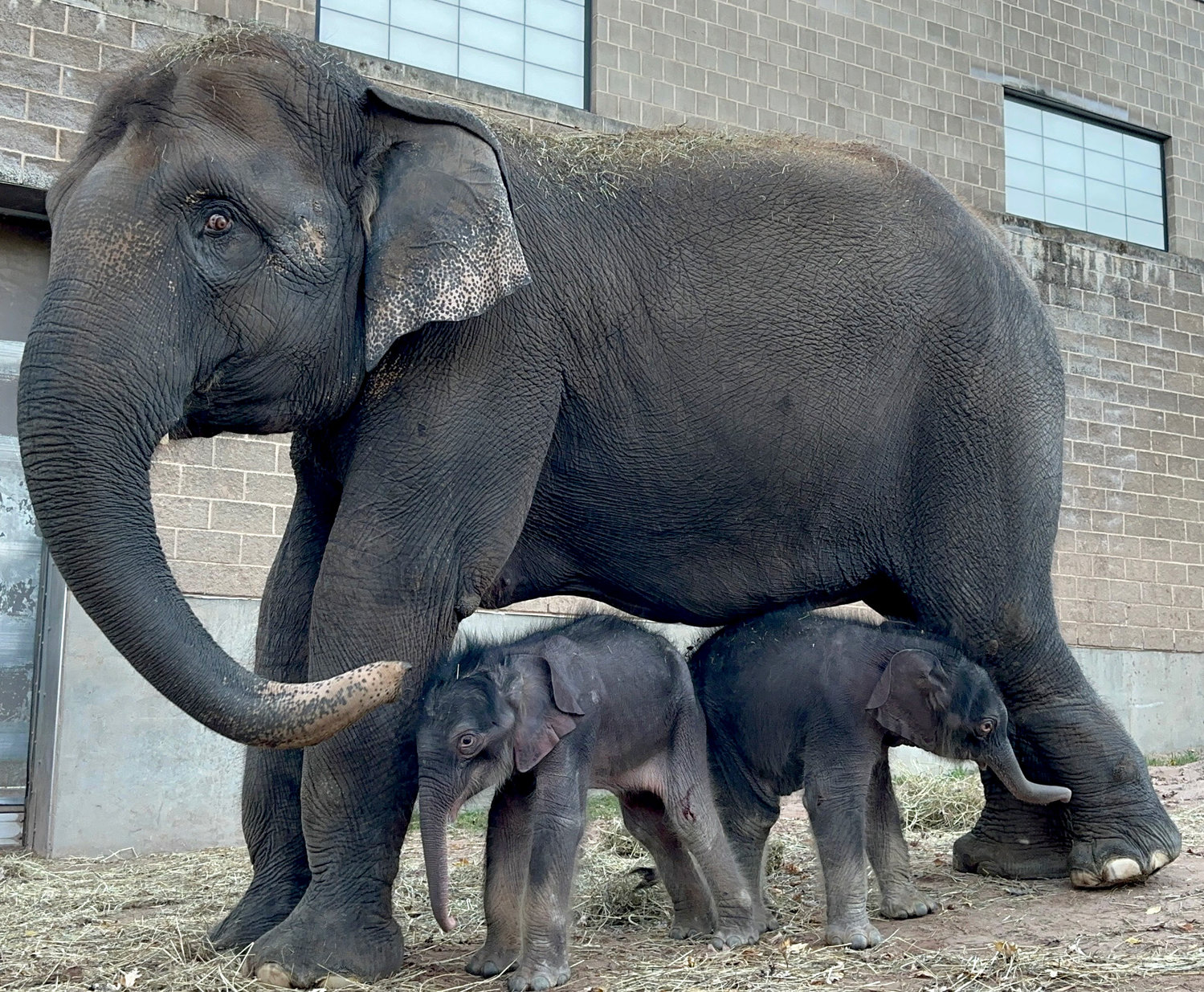 SYRACUSE — Visitors to the Rosamond Gifford Zoo’s elephant enclosure will be seeing double thanks to the arrival of male Asian elephant twins.

The twins were born on Oct. 24, making history as one of the most rare elephant births to ever occur. Elephant twins comprise less than 1% of elephant births worldwide, according to zoo officials.

What’s rarer yet, is twin elephant births being ultimately successful. Of twin pregnancies, twins are often stillborn or are too weak to survive. Sometimes the mother elephant does not survive. To date, there has never been a recorded case of surviving elephant twins in the United States, according to the Rosamond Gifford Zoo. The few successful twin births have only taken place in their range countries in Asia and Africa and nowhere else in the world, officials said.

Due to the sheer improbability as well as the complexity of elephant ultrasounds, the zoo said that its team did not anticipate the birth of twins. “However, they were prepared,” the zoo wrote in a press release.

Both the calves and mother Mali are reportedly doing well. For the past two weeks, the elephant care team has been reportedly monitoring the twins around the clock to ensure both are thriving.

“I can’t commend my team enough for all they have done these past few weeks to ensure the care and safety of Mali and her twins. It has been incredible to watch them in action and witness the high level of expertise, professionalism, and focus under pressure,” said Zoo Director Ted Fox.

Mali delivered the first calf — a 220 pound male — at 2 a.m. with no complications and “perfectly healthy,” the zoo said. The second calf came 10 hours later at 11:50 a.m. in an event that astonished the animal care staff. This calf was also male, weighed 237 pounds, but was noticeably weaker than the first.

The zoo’s animal care team and veterinary staff sprang into action and were able to significantly improve the calf’s condition, officials said. Elephant care staff supplemented the second calf with a specialized milk replacer they received days before the delivery.

“This is truly an historic moment for the zoo and our community. I couldn’t be prouder of our exceptional animal care team, the support of the veterinary staff, and their tremendous dedication to Mali and the twins,” said Onondaga County Executive Ryan J. McMahon. “The important research happening right here at the zoo will have a significant impact worldwide on behalf of this magnificent endangered species”

With the addition of the twins, there are eight members of the zoo’s elephant herd that reside at the Helga Beck Asian Elephant Preserve. The new calves will be the third generation in the herd’s family which includes Mali and her half-sister Kirina and Mali’s mother, Targa – mimicking natural herd compositions in the wild. The preserve is also home to unrelated “aunties” – matriarch Siri and Romani. The twins’ father’s name is Doc.

“Mali’s twins are an incredible achievement for both the zoo and Asian elephant conservation worldwide,” the zoo stated.

Asian elephants are classified as Endangered by the International Union for the Conservation of Nature (IUCN). Their wild populations are threatened by human conflict, habitat destruction, and ivory poachers.

There are an estimated 20,000 individuals left in the wild, according to officials.

The twins are a part of the zoo’s participation in the Association of Zoos and Aquariums’ Asian Elephant Species Survival Plan, a gold-standard population management and conservation program designed to save critically endangered animals. Of the 238 zoos and aquariums accredited by the AZA, only eight are Asian elephant breeding facilities, officials said.

“It is clear that zoos are places where people connect to wildlife, but they are also where the extraordinary conservation and research achievements occur,” said Dan Ashe, president and CEO of the Association of Zoos and Aquariums. “Breakthroughs in sustaining endangered animals stem from the people whose hearts and minds are fastened to their conservation mission. Saving species is why we do what we do. Congratulations to the amazing professionals at Rosamond Gifford Zoo for their remarkable achievement!”

Of extreme importance are Mali’s placentas, which were immediately transported out of state for elephant research, the zoo reported. They will be studied and used for research toward the treatment and the development of a vaccine to combat Elephant Endotheliotropic Herpes Virus (EEHV), a lethal strain of herpes believed to naturally occur among elephants in a dormant form. The virus can become active without warning and is the leading cause of death among young elephants, according to officials.

EEHV claimed the lives of Mali and Doc’s previous two calves, Batu and Ajay, at the zoo in December 2020. After this tragedy, the Friends of the Zoo created the Ajay and Batu Memorial Fund in memory of the young elephants. The funds raised were used to provide EEHV resources to the zoo — including equipment to test for EEHV in-house at the zoo’s new state-of-the-art Animal Health Center, officials reported.

According to Rosamond Gifford Zoo, all elephants at the zoo are tested twice a week for EEHV, and the twins will be extensively monitored for signs of the virus. Officials say the testing and research done at the Animal Health Center will contribute to the efforts to someday eradicate EEHV and help elephants both in human care and in the wild.

The Rosamond Gifford Zoo has been a leader in elephant husbandry and conservation since 1986, and with its state-of-the-art elephant care facilities, experienced elephant care team, and partnership with Cornell’s Veterinary School – it continues to act as a distinguished model for elephant programs around the world.

Visitors will be able to see the elephant twins at the Helga Beck Asian Elephant Preserve daily from 11-11:30 a.m. and 2–2:30 p.m. indoors at the Pachyderm Pavilion viewing windows.