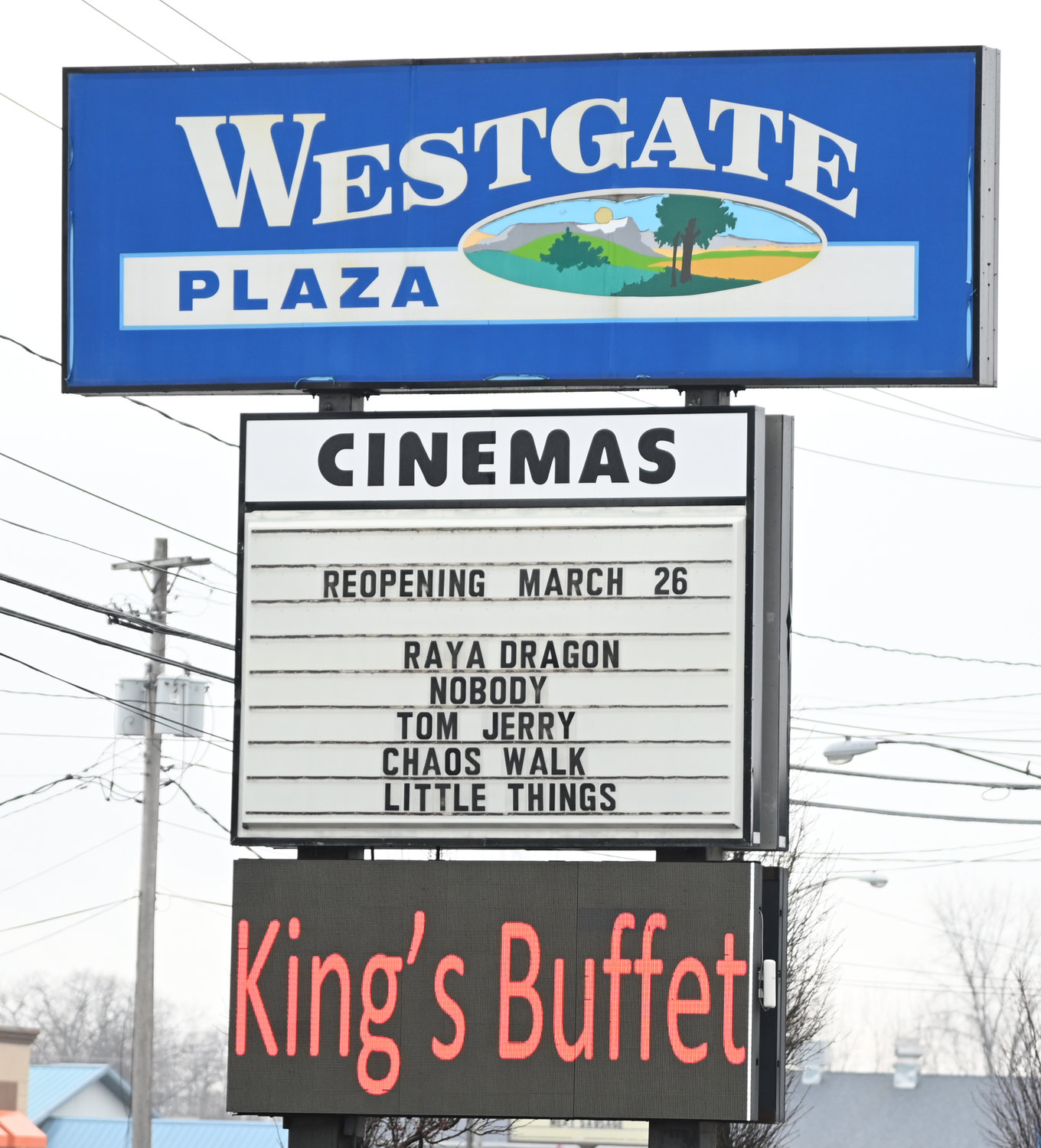 BACK TO THE BIG SCREEN — A sign at Westgate Plaza on Erie Boulevard West announces the re-opening of Rome Cinemas on Friday, March 26. Starting spring break week, the cinema will be open every day.
(Sentinel photo by John Clifford)
Posted Friday, March 19, 2021 5:26 pm
Nicole A. Hawley
Staff writer
email

Zurich Cinemas has announced that “the intermission is over” and movies will once again hit the big screen starting Friday, March 26.

Earlier this month, Gov. Andrew M. Cuomo announced he would ease restrictions and begin to allow more people inside arts and entertainment venues.

The loosened rules come more than one year since Cuomo first issued shutdown orders that brought social and economic activity to a halt, and mark a step forward in the state’s reopening process.

Conrad Zurich, president of Zurich Cinemas Corp. in Fayetteville, Onondaga County, which owns Rome Cinemas and Movieplex Cinemas in Oneida, said the first week the cinemas are open, he hopes to offer matinees, especially for children and families who will be out of school on spring break.

“The first week we’ll be open every day,” said Zurich. “We want to try to be open when there’s a school break, and at least Friday, Saturday and Sunday otherwise. We’ll just have to take it as it comes.”

Movie theaters will be limited to a 25% capacity, so Zurich encourages patrons to order their tickets online before their show to guarantee they’ll have a seat.

Starting Friday, Zurich Cinemas will feature the new Disney animated film, “Raya and the Last Dragon,” as well as a modern revamp of the classic cartoon cat and mouse, “Tom & Jerry the Movie.”

Also among the film offerings will be the psychological thriller “The Little Things,” starring Denzel Washington, the science-fiction feature, “Chaos Walking,” and action flick, “Nobody.”

“I’ve put in lots of requests for
different titles, and we look forward to seeing what we can get,” Zurich said. “We’ll have eight screens open and some pictures will play on two screens because the state is restricting us to 25% capacity of our seating.”

As for preparing its theaters for guests, “We’ve done all the sanitation — more than is required,” said Zurich. “And again, we’ll have our delicious popcorn and all the accompanying snacks.”

“We’re very happy about this,” he said. “It’s been a long time since unfortunately we were closed by this virus, which I believe is under control, and the vaccinations are helping tremendously.”

Zurich said as theaters continue to reopen and as COVID-19 restrictions continue to lessen, patrons can expect a busy movie season during the summer months of June, July and August because so many opening dates for feature films were pushed back from 2020.

Zurich issued the following customer safety guidelines, which are also available at http://rome.zurichcinemas.com:

• Tickets may be purchased online at zurich cinemas.com or Fandago.com to cut down on contact and guarantee admission.

• Cinema staff will wear face coverings and gloves. The temperatures of all staff will be checked before they are allowed to start work.

• Practice social distancing and maintain a distance of 6 feet apart at all times.

• The cinema will operate under a reduced number of showtimes to allow more cleaning of the cinema.

• Seating will be arranged to maintain a 6-foot distance between members of the audience.

• Family groups may sit together, but 6 feet will be maintained between groups.

• Face coverings are mandatory unless eating or drinking in your seat. Allow for proper respiratory hygiene and cough etiquette.

• Hand sanitizer will be available for all guests.

• Concessions will be open, but there are no refills at this time.

• Delay your visit and quarantine if you have recently been in contact with anyone diagnosed with COVID-19.

• Purchasing tickets means patrons must adhere to all rules and guidelines or will be asked to leave.