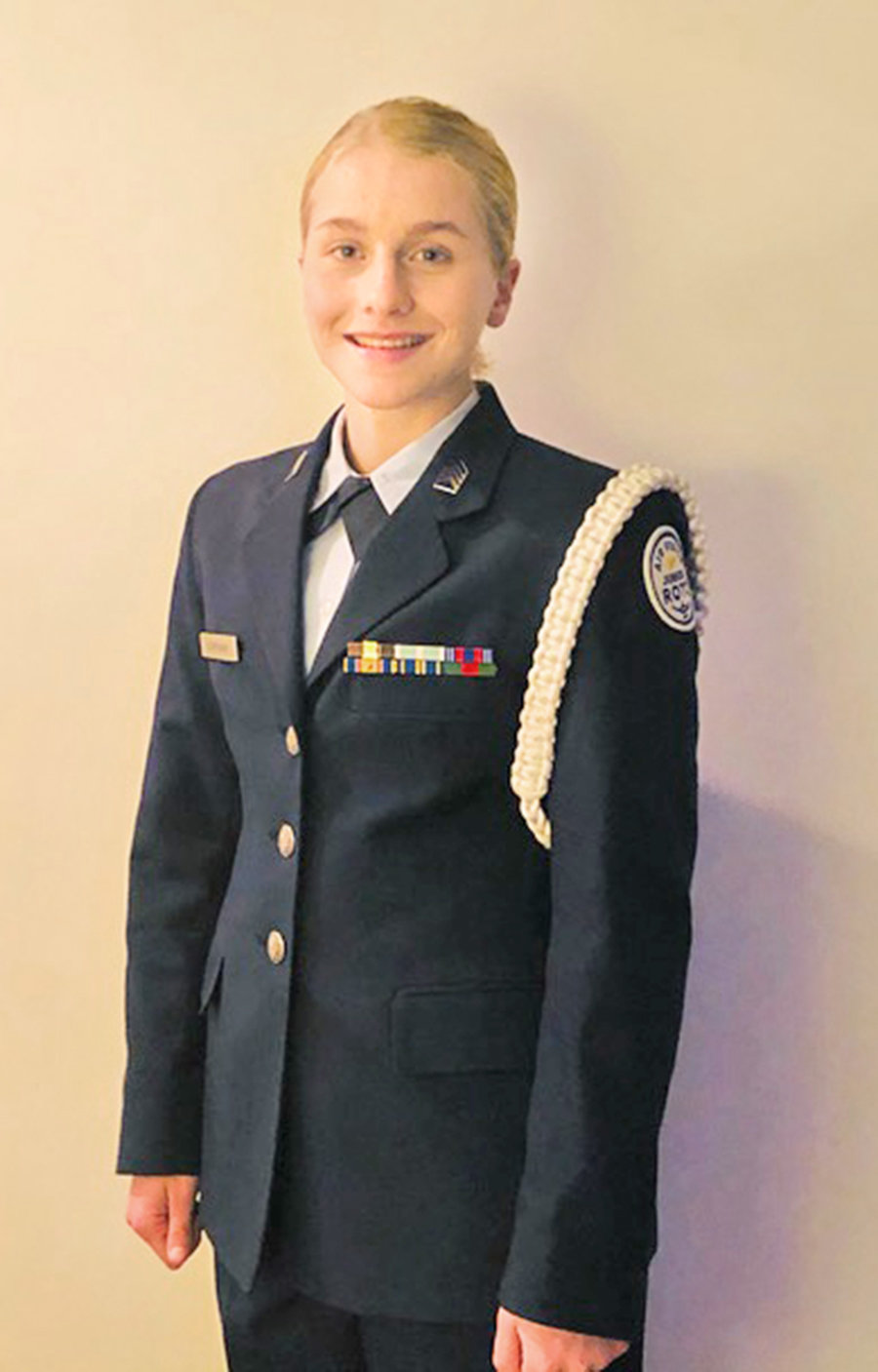 Lauren Dorfman was approaching the end of her freshman year at Rome Free Academy when, as a member of Junior Air Force ROTC, she participated in a Memorial Day ceremony at Veterans Memorial Park.

She recalls the day in detail, standing up to honor all the people who died for our country. She shares that it was that day, in those moments, she knew. “Wearing the uniform that day just touched my heart,” said Dorfman, “and that’s when I knew the military was the route for me.”

Dorfman sees a career in military service as “a way to pay back those who made the ultimate sacrifice.”

Now a senior at RFA, Dorfman, daughter of Kristen Dorfman, a 13-year Navy veteran, was among a distinguished cohort of 11 of the region’s high school seniors nominated for admission in the fall of 2022 to the U.S. military service academies by Rep. Claudia L. Tenney, R-22, New Hartford.

Dorfman has participated in RFA’s Air Force ROTC through all four years of her high school career. She is the secretary of the RFA chapter of the Rotary Club and the president of the Leo Club, both service clubs that organize RFA’s student to give back to their community. Dorfman is also a member of the varsity softball team and a star varsity soccer player for the Black Knights.

But her extracurricular achievements have not stood in the way of Dorfman’s performance in the classroom. While local school districts have yet to unveil their annual “Top 10” lists of scholars, Dorfman is unofficially currently ranked No. 1 in her senior class, having or will have completed 40 dual college credits, not counting the multiple Advanced Placement courses she has taken during her high school tenure.

As for Dorfman’s intended field of study at whichever military academy she chooses, she is still torn between aerospace engineering and intelligence services. She is also interested in foreign area studies and a concentration in either Chinese or Arabic.

“I am interested in the intelligence side of the military,” said Dorfman, “but if I ultimately study aerospace, I would be looking to become a pilot.”

Dorfman may also have the opportunity to highlight her athletic prowess as an NCAA Division I varsity soccer player during her academy career. An injury recently forced Dorfman to temporarily trade in her cleats for crutches and kept her from participating in the Annapolis ID Camp. But she will have the opportunity to participate in West Point’s ID Camp this summer and be invited to the Naval Academy soccer tryout in the fall, should she choose to matriculate there.

She will learn more about opportunities to play for the Air Force Academy once she learns the status of her medical waiver (required as a result of that same high school injury).

“I knew it would be a lot of work to accomplish these goals,” said Dorfman, “and I’m just really happy that my hard work is paying off, and that I have this opportunity.”

While her hard work has certainly cleared almost any future path Dorfman could imagine, her call to serve echoes for her from family and home. Dorfman’s father, Kristen Dorfman, graduated from Top Gun and served as a naval F14 Tom Cat pilot for 13 years, before retiring to raise Lauren and her two brothers as a single dad.

Dorfman’s oldest brother, Connor, graduated from Syracuse University, where he participated in ROTC, and currently serves as a Weapons Systems Officer in the United States Air Force.

Her brother, Logan, RFA Class of 2021, was a varsity hockey standout for the Black Knights and is playing juniors hockey for the USPHL Utica Junior Comets. Dorfman does not rule out the possibility of military service for him.

“He hasn’t made that decision yet,” said Dorfman.

Lauren has yet to choose between the three service academies. She has been accepted to both Annapolis and West Point and her acceptance to the Air Force Academy is pending only her medical clearance. While her formal announcement is yet to made, Dorfman is leaning toward following in her father’s footsteps and pursuing a career in the Navy, where she feels she will get to do a little bit of everything.

As part of her role as a U.S. Congresswoman, Tenney is tasked with recommending a limited number of high school seniors from her 22nd district interested in pursuing military service careers who are distinguished by outstanding academic achievement, personal character and commitment to community service.

“I can’t find the words to describe how this feels,” said Dorfman.

Nash was not a loss for words to express the RFA community’s pride in Dorfman.

“Whether you’re a student, a teacher or an administrator,” said Nash, “she has made RFA a better place to be.”

For Dorfman, while RFA was a great experience, the military academy and a service career that await her is “a dream come true.”