Board of Education OKs sales contract for former school 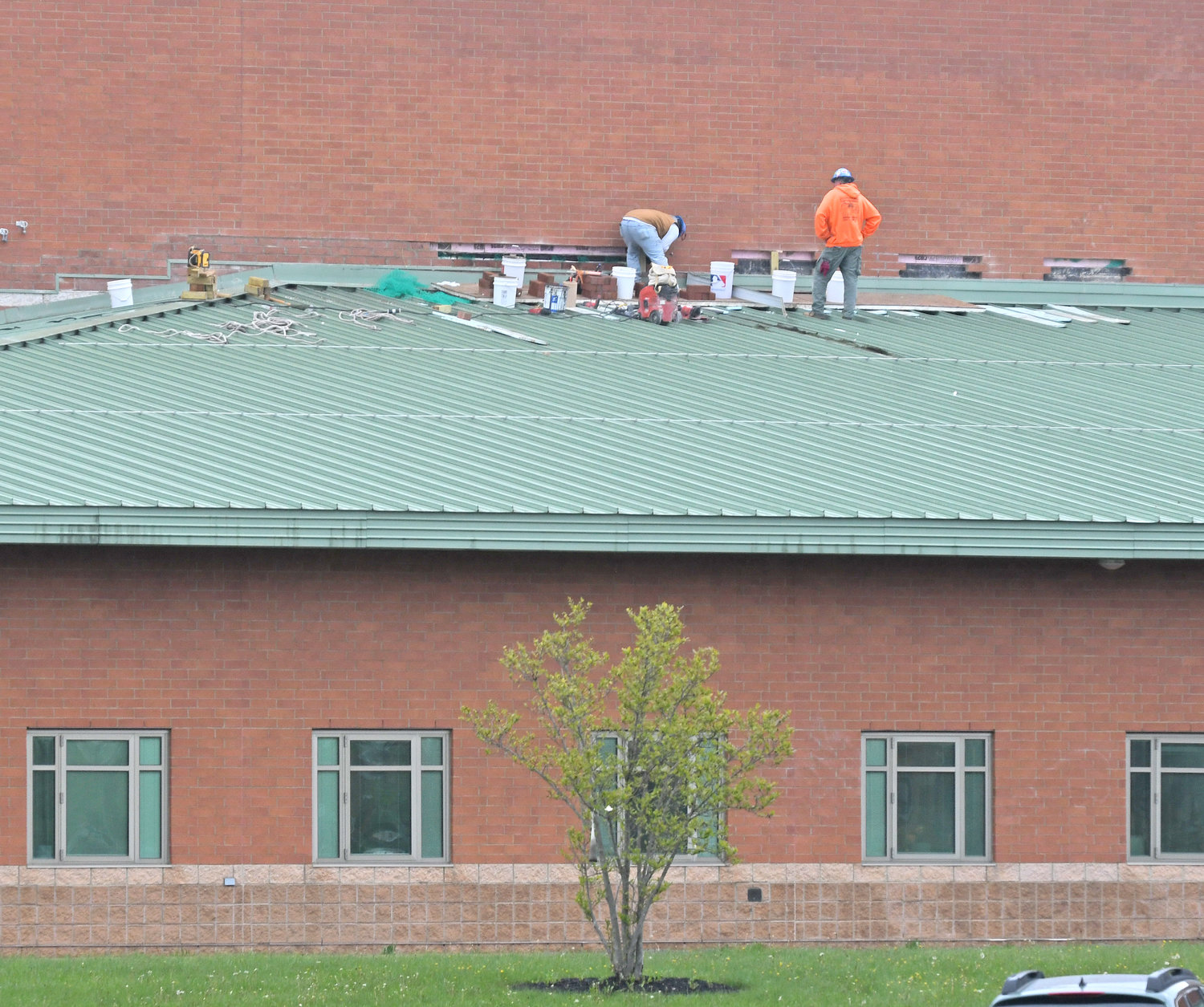 RFA WORK — A pair of contractors are shown at work on a portion of the Rome Free Academy in this 2021 file photo shortly after repairs to the roof and renovations to the pool area were authorized. The pool renovations are nearly complete, following a $29,800 change order for painting approved by the district's Board of Education last week.
(Sentinel file photo by John Clifford)
Previous Next
Posted Friday, January 21, 2022 7:30 am
Cara Dolan Berry
Staff writer
email

Among the items up for discussion and a vote by the board was a resolution of approval to accept “change orders” to the 2019 Capital Improvement project in order to add “pool painting” at a cost of $29,800.

Superintendent Peter C. Blake explained that panels in the pool area at Rome Free Academy, located “way up high” near the building’s roof — which had been undergoing work since the summer to repair a faulty membrane — had worn and faded over the years.

The district decided that, rather than incur the cost of replacing the panels, they would paint them.

“It was discovered that a special type of paint is required,” said Blake, “so the change order is to get the proper paint to get that done.”

Blake offered that the project needed to be fast-tracked because there is scaffolding present in the pool area that costs $2,500 per week to keep up. “I apologize for moving quickly,” said Blake, “but we just found out last week and did not want to incur scaffolding rental and delay pool opening.”

Once up for a vote, all members approved the expense.

In addition, Board President and Finance Committee Chair John Nash moved a resolution to transfer $5,000 to the district’s Capital Reserve Plan. Board member Joe Mellace queried Blake as to the current balance of the reserve, to which Blake replied, “zero.”

That motion was also carried unanimously.

Nash shared that the committee had received requests for proposals for “a couple of internal and external audits” and Blake confirmed those should be done in the spring. He also confirmed that a draft RFP for the district’s Diversity, Equity and Inclusion work — where the board did not have the votes sufficient to retain the prior consultant, Access Global Group, in December – was in progress.

The issue of an RFP for school furniture sparked discussion among members. Board Vice President Tanya Davis confirmed that the RFP was to engage a person who would assess the district’s needs and look at available sources for each grouping.

Blake offered that a survey of the district’s teachers was in progress, with a priority being placed on flexibility, allowing them to transition furniture to support different approaches to lessons and teaching.

“It is important for all nine of us to know when its time to make that decision,” said Davis of the selection of a contractor. “It’s important for public to know. Not every one fits in the rows that we were used to when we went to school.”

The action items also including the appointment of non-instructional personnel, an after-school program tutor, the approval of staff transfers and the appointment of Cristin Checchia as Interim Director of Supported Learning. No salary amount for Checchia was included with the resolution.

All motions carried without dissent.

The board approved a new sales contract for the Fort Stanwix Elementary School property, located at 110-112 West Linden Street in Rome, for the same purchase price as the prior contract – which has since expired – of $525,000.

The Board approved the new sales contract.

The next regular meeting of the Rome Board of Education is scheduled for 6 p.m. on Thursday, Jan. 27,  at the district offices on 409 Bell Road.