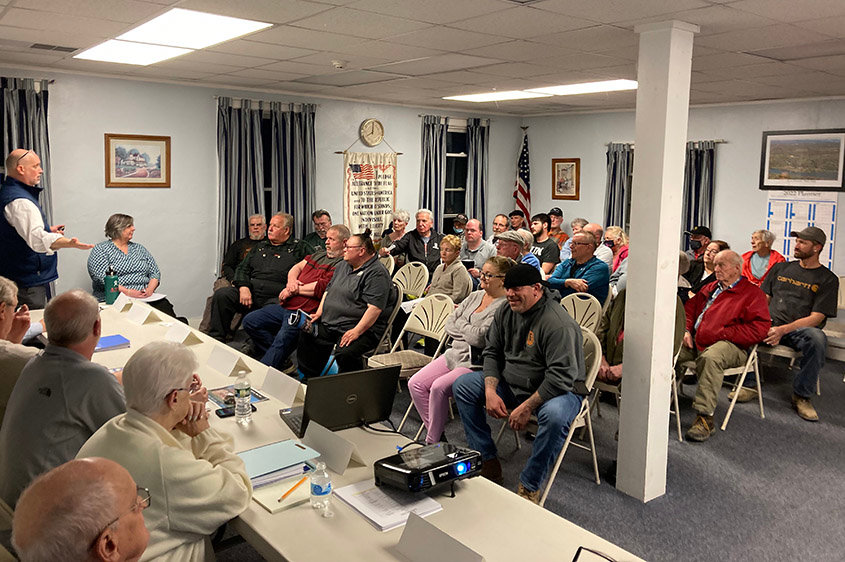 FORT JOHNSON — Early details about the process and potential impacts of dissolving the village government in Fort Johnson seemingly won over residents packed into Village Hall on Wednesday.

Around 10 residents who signed up to ask questions or make comments during an informational meeting on dissolution declined when the opportunity came around, indicating their concern had been addressed during the presentation by Ben Syden of Laberge Group.

The village hired the planning firm to prepare a proposed dissolution plan studying the various impacts after the Board of Trustees voted in February to explore the process.

The board began discussing the option a year earlier due to lack of interest and involvement in the village from residents that created concerns about long-term leadership and operations.

Laberge Group is still in the early stages of gathering information about the village to analyze the impacts of dissolution on governance, services and financial resources. Those details will inform a plan to transition operations to the town of Amsterdam which would absorb the village.

The plan will be presented to the Board of Trustees once complete for final consideration that, if adopted, would lead to a public referendum allowing registered voters in the village to have the last say.

Amsterdam officials and residents are not able to vote on whether the village dissolves and is absorbed by the town. However, Fort Johnson and town of Amsterdam officials are working closely together on the analysis and plan to ensure a smooth transition if dissolution is approved.

Several residents pointed to the delivery of snow removal and maintenance of public works in the village as their biggest concerns if Fort Johnson is absorbed by the town.

Amsterdam Supervisor Thomas DiMezza said the village’s existing full-time highway staffer would be hired to continue servicing the roads and public spaces in Fort Johnson with support as needed from the larger contingent of employees in the town.

The only other village staff, a part-time administrative employee and another public works member, have indicated their intents to retire. Syden pointed out that Amsterdam provides the same services that are offered in Fort Johnson with a larger staff to take on any additional duties.

Snow removal is a worry for Richard Smith who has lived on top of a hill in the village for around 40 years. Fort Johnson crews have always done a good job clearing the road and Smith was convinced during the meeting the town can carry on those same services.

“I think it’s a good thing, personally,” Smith said of dissolution. “I’d like to see it. I think it’s going to benefit everybody.”

The impact to taxpayers was the other main concern expressed by residents. Property owners who pay a tax rate of $86.71 per $1,000 of assessed value in Fort Johnson may see a savings if the village is absorbed by Amsterdam where there is no townwide tax.

Property owners in the town do pay taxes to cover the cost of fire protection services. The rate to Amsterdam residents in the Fort Johnson Fire District is $24 per $1,000 of assessed value this year.

Fort Johnson property owners have the additional responsibility of repaying the village’s sewer debt. The flat fee was $185.45 in 2021.

Pleased murmurs swept through the crowd when Fort Johnson Mayor Michael Simmons said the village would pay off the sewer debt if the local government is disbanded. Whether that would be accomplished with reserve funds or another source is still being determined.

A special sewer district to pay for services and maintenance in the village through property taxes on users would need to be established.

Trying to dispel any concerns about a potential loss in identity, Syden noted that Fort Johnson would retain its name but would simply become a hamlet instead of a village. Plans about how to dispose of village assets are still developing.

The town would maintain the existing park and would likely take over the highway facility and equipment. Village Hall would potentially be acquired by the Fort Johnson Volunteer Fire Company, which would continue providing service to both the village and the town.

The lack of interest of locals to get involved in continuing to run the village independently is a clear indication to resident Mary Maines that dissolution should be pursued.

“The board here can’t get the help, people are retiring and nobody wants to run for office,” Maines said. “If all these people tonight would just show up to normal meetings and would show up to participate and run for office you wouldn’t have this.”

There is already a close relationship between the two municipalities with some shared personnel and support offered when needed.

Fort Johnson already has representation in Amsterdam where both Maines and village resident Ronald DiCaprio serve on the Town Board. The presence of the village within the town makes Fort Johnson residents eligible to seek office in Amsterdam.

A draft dissolution plan with more precise details is expected to be prepared in about two months and will be presented at a public meeting where
residents can ask questions
and make comments, Syden said.

The Fort Johnson Board of Trustees could subsequently make revisions before deciding whether to adopt the document to pursue dissolution or reject it to end the process without action.

A public hearing would be held on the plan if approved before the public referendum, which Syden indicated
could take place in about six months.