A red fox — which gained a bit of local stardom with its forlorn glances into the Stewart’s Shop convenience store at Griffiss Business and Technology park — is now in the care of Woodhaven Wildlife Center in Chadwicks. 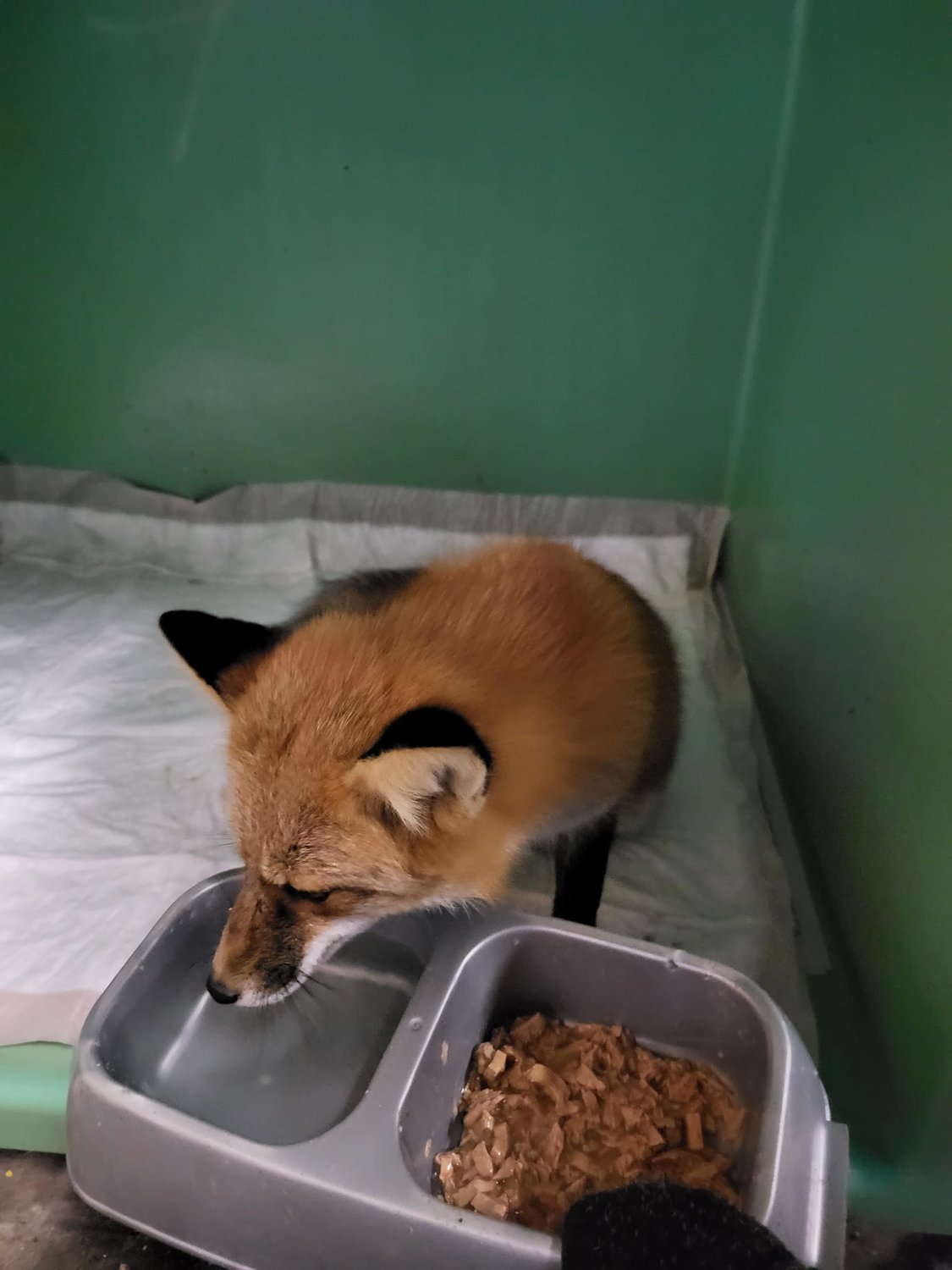 This red fox, which had been roaming Rome for a couple weeks and caught peering through windows at the Stewart's Shop on Griffiss Business and Technology Park, is now in the care of Woodhaven Wildlife Center in Chadwicks. He is headed for Cornell on Wednesday for X-rays of an injured paw and further treatment. At left, the critter is shown on social media posts on Sunday at Stewarts. At right, the fox enjoys a meal and some water at the wildlife center.
(Image on right courtesy of Woodhaven Wildlife Center)
Posted Wednesday, November 9, 2022 10:02 am
Nicole A. Hawley
Staff writer
email / twitter
ROME — A red fox — which gained a bit of local stardom with its forlorn glances into the Stewart’s Shop convenience store at Griffiss Business and Technology park — is now in the care of Woodhaven Wildlife Center in Chadwicks.
The fox’s visits to the store on Sunday were captured on cellphone images by local residents, who saw the creature wistfully wander about the exterior of the store and the surrounding area, and shared widely on social media.
Judy Cusworth, licensed wildlife rehabilitator and owner of Woodhaven Wildlife, said she was made aware that the male fox had been roaming around Rome for at least a couple weeks.
A local resident, along with Rome Police, were able to restrain the animal until the woman’s husband could bring a crate.
“I got the call about a fox that had been roaming around for a while, and I even saw a post about it on Facebook,” said Cusworth. “I was told he was at the Stewart’s window, which is not normal.”
Cusworth said she didn’t fear that the fox had rabies because if he did, he would have already died from the disease.
“I’ve done this for 34 years and he wouldn’t be walking around for two weeks if he had rabies,” she added. “That night he must have gotten into some kind of scuffle, because we found him with an injured front paw that has a deep hole that’s going to need a couple stitches.”
But Cusworth is concerned about the fox’s behavior, knowing that he was found peering into the windows at the convenience store.
“He’s eating and drinking right now, but I don’t know if he was hand-raised and then let go,” the wildlife rehabilitator said. “He’s perfectly healthy, but it’s not normal for it to walk up to people’s cars and to be looking into doors and windows. He’s not sick, and he’s not afraid of people.”
The fox is now headed for Cornell Wildlife Hospital on Wednesday morning for further treatment and X-rays of his front paw, and to check for a possible head injury. Staff will also perform blood work.
“Then I assume they’ll send him back to me,” Cusworth said.
Woodhaven Wildlife Center is a non-profit organization, that operates solely on donations. It is focused on rescuing, raising, rehabilitating and releasing injured and orphaned state-native species. To learn more about the Woodhaven
Wildlife Center and the work that Cusworth does with a wide aray of wildlife, see the center’s Facebook page at https://www.facebook.com/woodhavenwildlife/.
Donations, Cusworth said, are handled the old fashioned way, by mail and checks made out to the Woodhaven Wildlife Center can be sent to the center at P.O. Box 355, Chadwicks, NY 13319.
As for red foxes, they are the most widely distributed carnivore in the world, and are known to occur in nearly every county of New York, according to the state Department of Environmental Conservation. It prefers to live in areas that provide both food and camouflage such as the edges of forests but will also thrive in residential suburbs that offer ample habitats, a good prey base and keep them safe from expanding coyote populations, the DEC said.
Most red foxes eat a diet of small mammals like mice, squirrels, woodchucks, and rabbits along with some ground-nesting birds, amphibians, reptiles, earthworms and carrion. are all consumed as the opportunity presents itself.
The DEC adds that the red fox is known for having a bit of a “sweet tooth.” While the fox, dubbed Stewart by some on social media, may have developed an affinity for Kaydeross Kreme or another of the chain’s famous ice cream flavors, the sweets most red foxes enjoy are ripening grapes and apples.
The breeding season for red foxes, who mate for life, is from December to April, with a peak between January and February. Dens are usually found in abandoned woodchuck or other small mammal burrows, widened to suit the needs of a family of foxes, according to the DEC. Red foxes are territorial and will defend its home area from other red fox, usually by antagonistic displays, chasing, and harassment and seldom by violence, the DEC said.
They are primarily nocturnal, but may occasionally be seen during the day — especially if there are growing pups to feed. They are seldom seen at gas stations, particularly, some might say, with gas prices being what they are. If you see a fox, admire it from a distance, both wildlife and health experts say, and avoid contact.