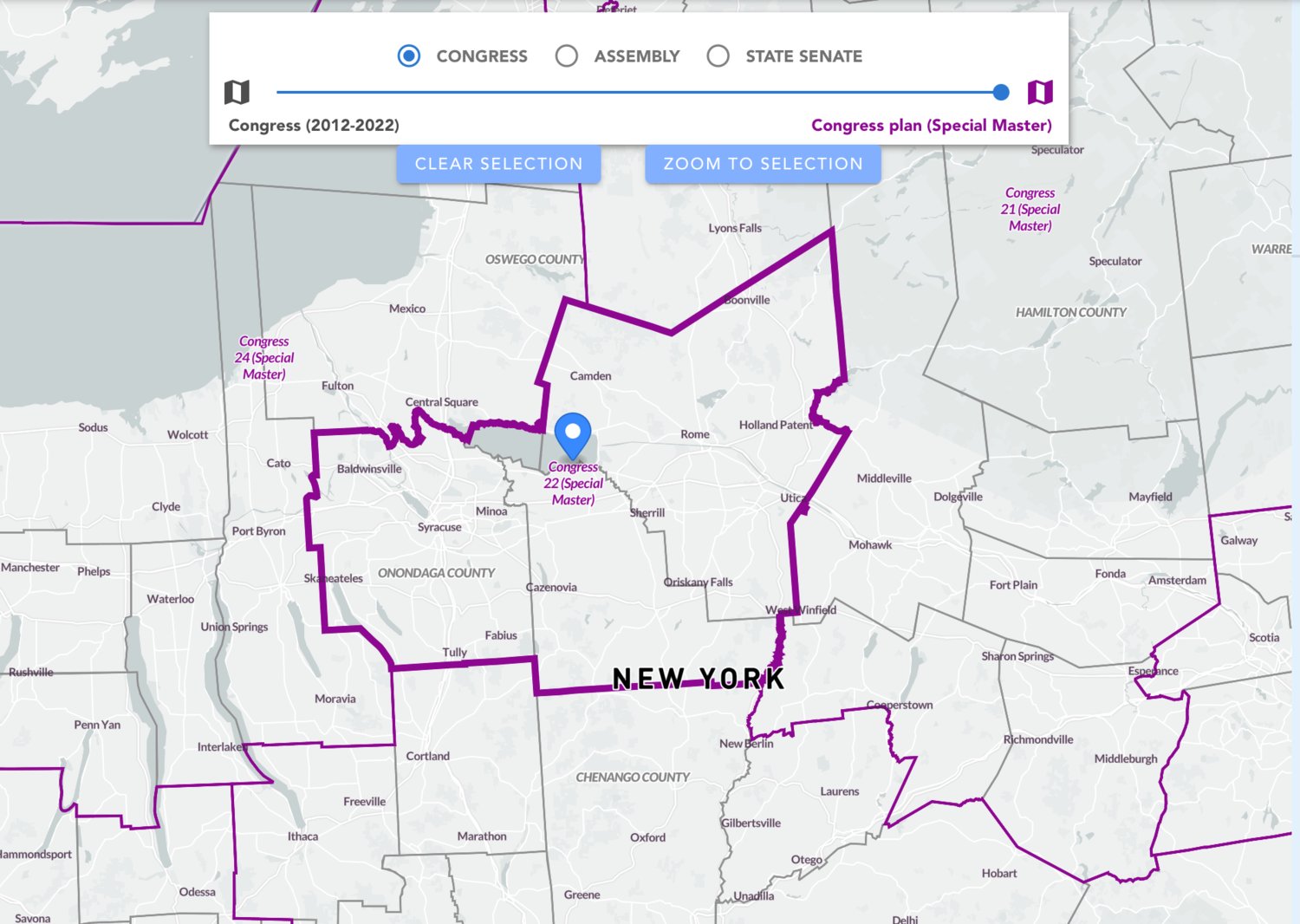 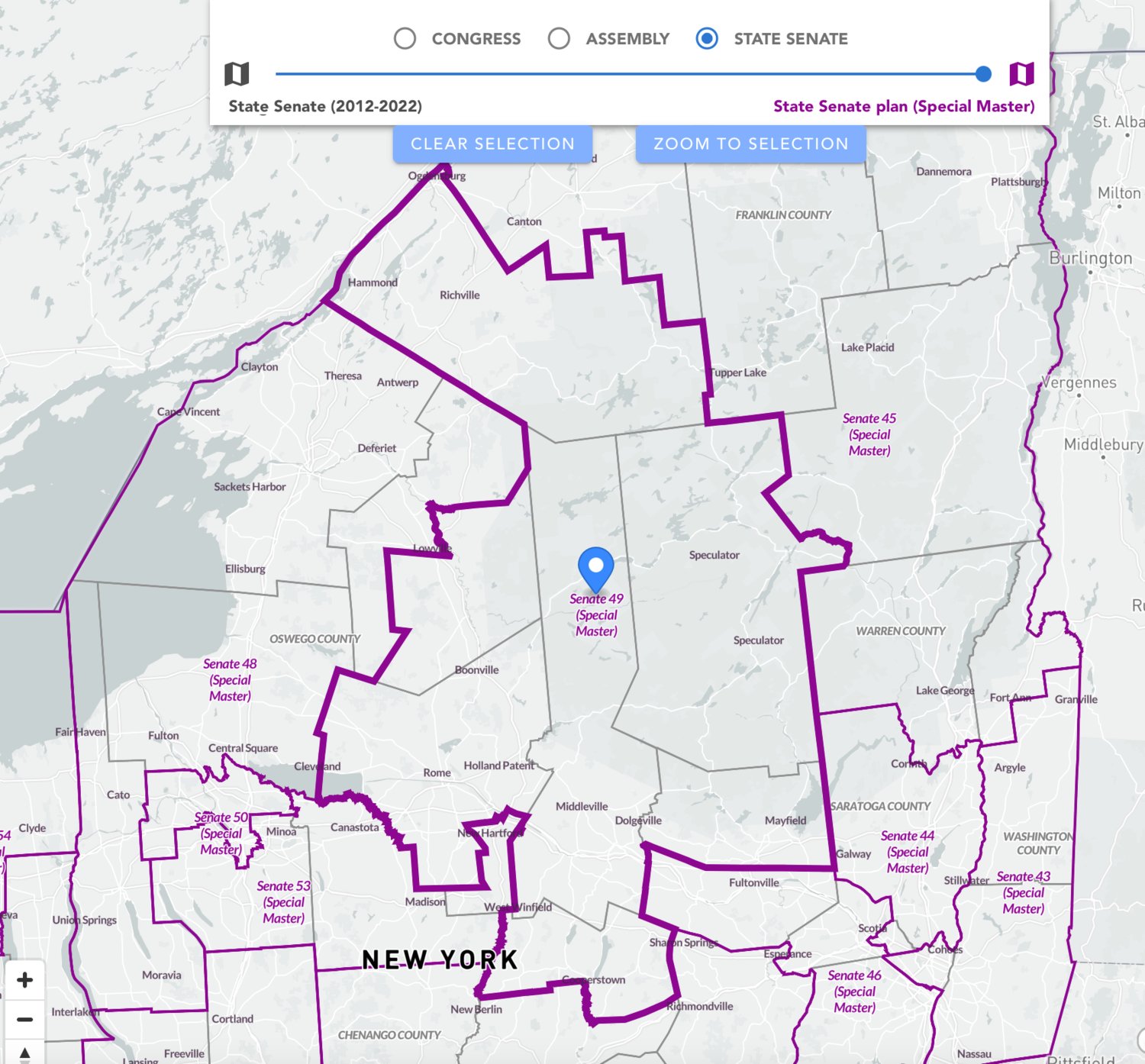 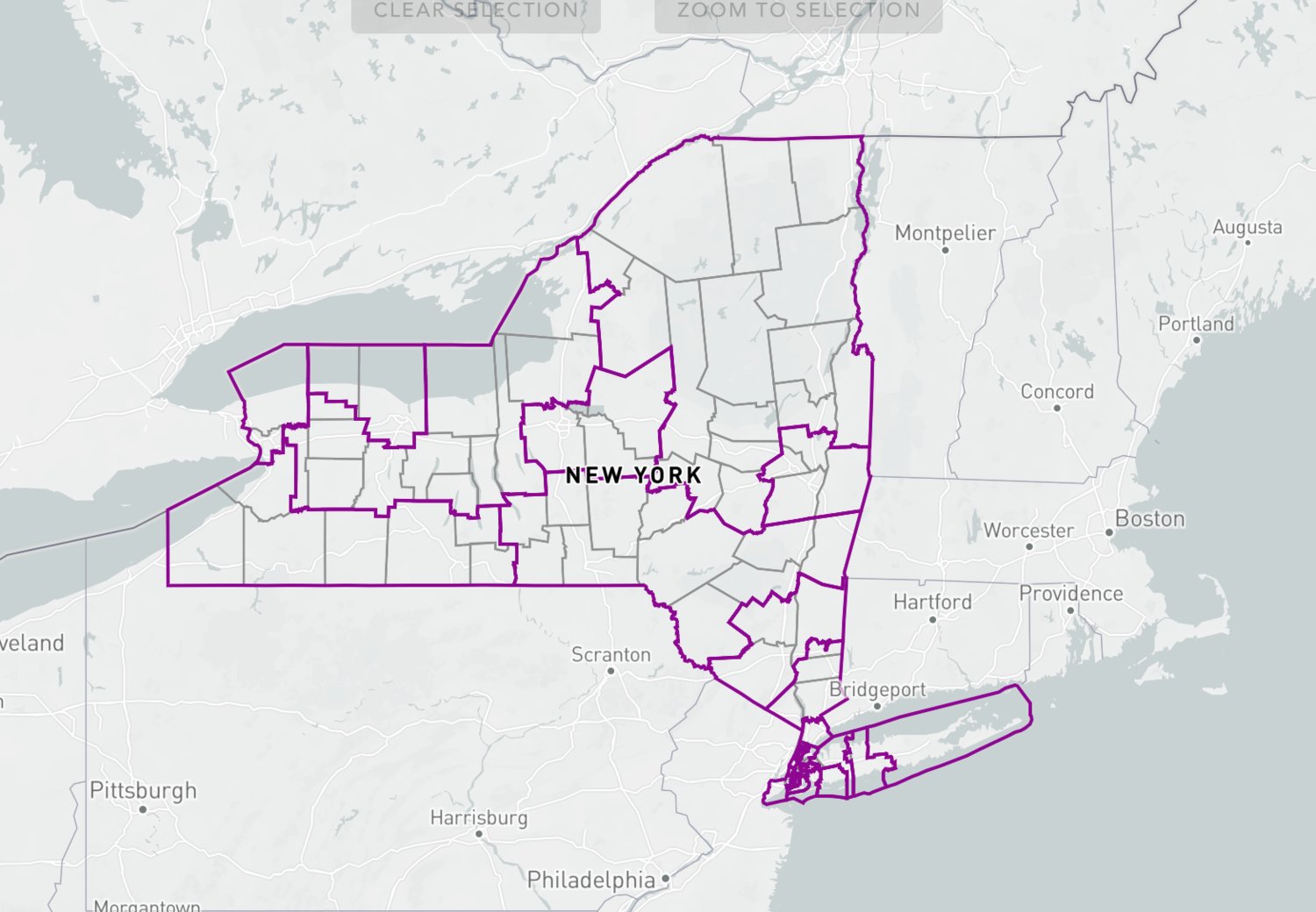 Pictured are redrawn congressional districts across the state.
(Provided image)
Previous Next
Posted Tuesday, May 17, 2022 8:43 pm
Staff and wire reports

There were mixed reactions by local elected officials and candidates following the release of new congressional maps for New York by a court-appointed expert on Monday. The newly redrawn districts are more favorable to Republicans than the original political maps drawn by Democrats.

The draft maps could help the GOP by creating five districts that lean Republican and at least four other districts where Republicans would be competitive, according to political observers. Maps drawn up by the Democratically controlled state Legislature as part of the redistricting process occurring every 10 years would have given Democrats a strong majority in 22 of 26 congressional districts, starting with this year’s election, but those maps were struck down by a court.

Currently, the state has 27 congressional districts but is losing one as a result of the 2020 census. Republicans hold eight of those seats. A New York court will take comment on the maps for two days before a final version is approved by a judge on May 20, with primary elections for congressional races and the state Senate now being held Aug. 23.

Among the biggest changes from the maps includes the 22nd District in Central New York. The district, which Democrats had drawn to include the cities of Syracuse and Ithaca, now includes all of Onondaga, Madison and Oneida counties in the special master’s maps.

Current 22nd District representative Claudia Tenney, of New Hartford, would be impacted by the change. Tenney, whose current district includes the Southern Tier, had announced, under the old maps, that she would seek the seat in the 23rd District. The special master’s district combines a portion of Tenney’s old district with that of Syracuse-area Republican John Katko, who is not seeking re-election.

The 21st District, currently represented by Republican Rep. Elise Stefanik, had included a significant portion of Oneida County in the Democrats’ plan, but would no longer contain a part of Oneida County under the special master’s maps. It would, moving forward, encompass all of Lewis and Herkimer counties.

“I look forward to running for re-election in NY-21 where I have been honored and humbled to earn historic support every election cycle!” Stefanik said in a statement after the map’s release. “I will always work my very hardest to deliver real results for the hardworking families in Upstate New York and the North Country.”

Democrat challenger Matt Castelli said, “As I have said all along, no matter where the lines are drawn, the people of NY-21 deserve a leader who puts country before party, unites our community, and will deliver real results for our district. I entered this race because Elise Stefanik is threatening our security by embracing extremism, rejecting practical solutions to serious problems, and putting her self-interest ahead of the needs of our communities. Our district deserves a representative who is focused on strengthening our security and who puts the needs of our community first - it’s what I have done my whole career and it’s what I will do in Congress.”

In the state Senate, current 47th District incumbent Joseph A. Griffo, R-Rome, would now be in the 49th District, which would include Oneida County and significant parts of Lewis and Herkimer counties as well as parts of several adjacent counties.

Adding to the redistricting tangle, the state’s Assembly and gubernatorial primaries are still scheduled for June 28.

The Court of Appeals didn’t order the drawing of new Assembly maps because a group of GOP voters who sued over the redistricting process didn’t specifically challenge them in their lawsuit. They only went after the maps for U.S. House and state Senate seats. A new lawsuit is attempting to condense all the election dates and toss out the state’s Assembly maps as well, arguing those are unconstitutional.