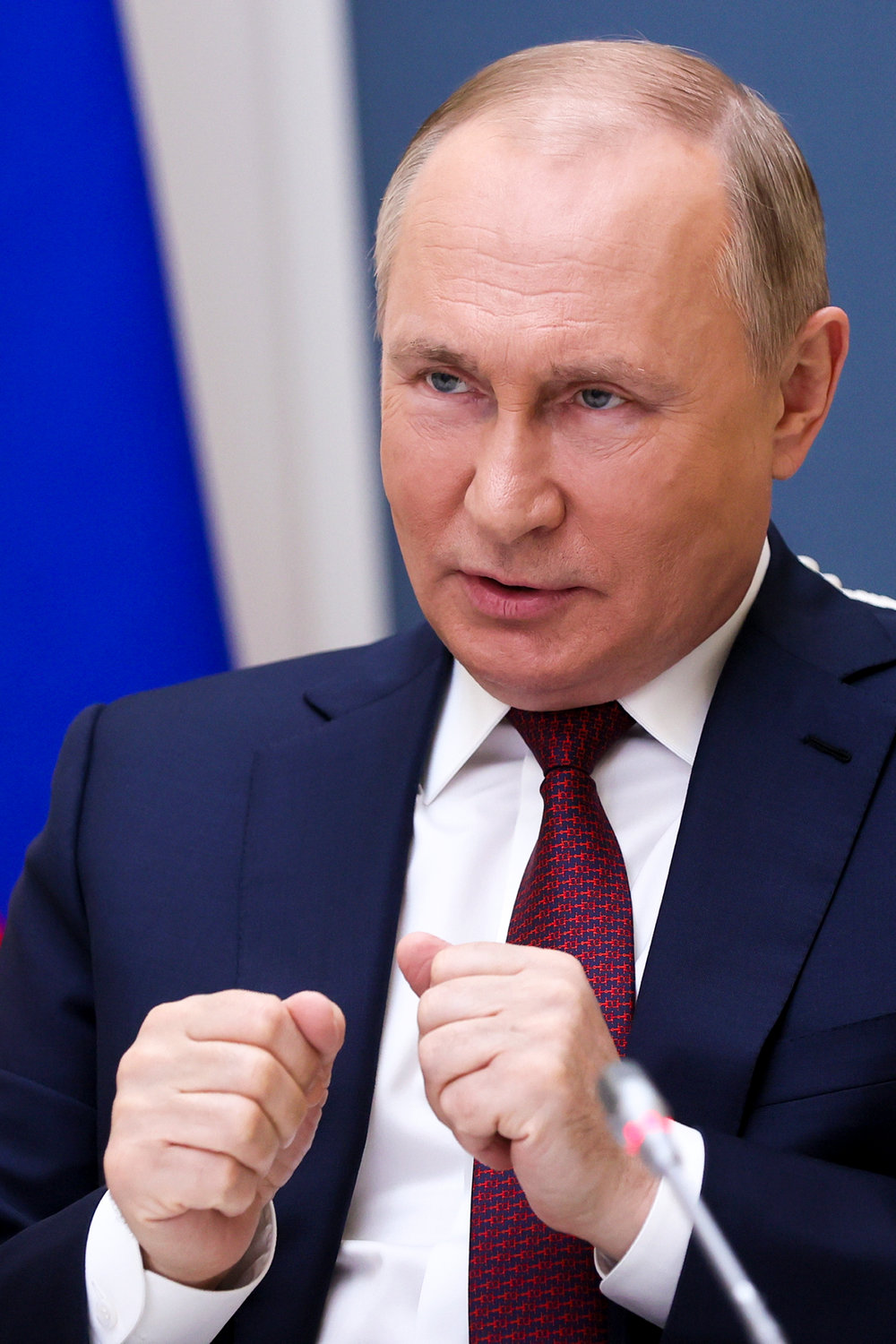 MOSCOW (AP) — Russian President Vladimir Putin on Tuesday sternly warned NATO against deploying its troops and weapons to Ukraine, saying it represents a red line for Russia and would trigger a strong response.

Commenting on Western concerns about Russia’s alleged intention to invade Ukraine, he said that Moscow is equally worried about NATO drills near its borders.

Speaking to participants of an online investment forum. Putin said that NATO’s eastward expansion has threatened Russia’s core security interests. He expressed concern that NATO could eventually use the Ukrainian territory to deploy missiles capable of reaching Moscow in just five minutes.

“The emergence of such threats represents a ‘red line’ for us,” Putin said. “I hope that it will not get to that and common sense and responsibility for their own countries and the global community will eventually prevail.”

He added that Russia has been forced to counter the growing threats by developing new hypersonic weapons.

“What should we do?” Putin said. “We would need to develop something similar to target those who threaten us. And we can do that even now.”

He said a new hypersonic missile that is set to enter service with the Russian navy early next year would be capable of reaching targets in comparable time.

“It would also need just five minutes to reach those who issue orders,” Putin said.

The Zircon hypersonic cruise missile, capable of flying at nine times the speed of sound to a range of 1,000 kilometers (620 miles), has undergone a series of tests, most recently Monday.

Ukrainian and Western officials have expressed worries this month that a Russian military buildup near Ukraine could signal plans by Moscow to invade its ex-Soviet neighbor. NATO foreign ministers warned Russia on Tuesday that any attempt to further destabilize Ukraine would be a costly mistake.

The Kremlin has insisted it has no such intention and has accused Ukraine and its Western backers of making the claims to cover up their own allegedly aggressive designs.

Russia annexed Ukraine’s Crimean Peninsula in 2014 after the country’s Kremlin-friendly president was driven from power by mass protests and also threw its weight behind a separatist insurgency that broke out in Ukraine’s east.

Earlier this year, a spike in cease-fire violations in the east and a Russian troop concentration near Ukraine fueled war fears, but tensions abated when Moscow pulled back the bulk of its forces after maneuvers in April.

Putin argued that to avoid tensions, Russia and the West should negotiate agreements that would safeguard each party’s security interests.

“The matter is not whether to send troops or not, go to war or not, but to establish a more fair and stable development and taking into account security interests of all international players,” he replied when asked if Russia was going to invade Ukraine. “If we sincerely strive for that, no one will fear any threats.”

The Russian leader noted that Russia has worried about NATO drills near its borders, pointing at a recent exercise that involved U.S. strategic bombers.

“Strategic bombers, which carry precision weapons and are capable of carrying nuclear weapons, were flying as close as 20 kilometers (12 miles) to our border,” Putin said. “That represents a threat for us.”

After the buildup of Russian troops near Ukraine early this year, Putin and U.S. President Joe Biden held a June summit in Geneva, where they agreed to launch a dialogue on strategic stability and cybersecurity. Putin on Tuesday hailed the cybersecurity discussions between Russian and U.S. experts, saying “just as with the pandemic, it’s necessary to pool efforts to work efficiently.”

Asked about reports on plans for a Biden-Putin call next month, White House press secretary Jen Psaki told reporters Tuesday aboard Air Force One that she doesn’t have “anything to predict or preview at this point,” adding that “obviously, we remain in touch as a follow up to the summit this summer, at a high level with Russian counterparts.”

Responding to a question about the threat of a Russian invasion in Ukraine, Psaki said “we’re deeply concerned about the heightened rhetoric, about the reported military buildup on the border.”

In Russia, when asked about Biden possibly seeking a second term, Putin said he thought that would help political stability in the U.S. The Russian leader drew a parallel with his own reelection plans.

Even though Putin hasn’t decided yet whether to seek another term before his current one ends in 2024, he said the possibility of him staying on has helped Russia’s stability.

The 69-year-old president has been in power for more than two decades — longer than any other Kremlin leader since Soviet dictator Josef Stalin. Constitutional amendments approved in 2020 reset Putin’s previous term limits, allowing him to run for president two more times and hold onto power until 2036.

“In line with the constitution, I have the right to get elected to seek a new term, but I haven’t yet made up my mind whether to do it or not,” Putin said. “But the very existence of that right already stabilizes the domestic political situation.”

Asked about China’s nuclear buildup, Putin said that Russia isn’t worried about it, adding that close ties between Moscow and Beijing are a “major factor of global stability.”

Associated Press writer Alexandra Jaffe contributed to this report from aboard Air Force One.