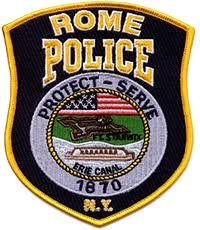 The union representing Rome's police officers has released information showing that the city was forced to end a ticket quota system referenced in the department's reform plan following a grievance by officers in February 2019 and subsequent arbitration ruling following a hearing in January 2020.

The ticket quota system was approved by the administration and stopped only when the union took the case to arbitration, the union said in its announcement on Thursday.

The Philip S. McDonald Police Benevolent Association said it won the arbitration following a hearing in January 2020, and the City of Rome was ordered to cease the ticket quota system. They said the system was in place for at least five years before the union stepped in.

"While our members are aware that traffic enforcement is a major function of law enforcement and take that function very seriously, no one sought out a career in law enforcement to be a revenue generator for a municipality," said Det. Jeffrey Lanigan, president of the union, in a release.

"Officers are given the right of discretion and shouldn't work in fear that they will be disciplined if they give someone a warning instead of a ticket."

According to the 2020 and 2021 municipal budgets on the city's website, www.romenewyork.com, the city has collected hundreds of thousands of dollars in "Court Fees (Police Fees)" over the past several years.

According to the first draft of the police department's reform plan, the union filed a grievance with the Public Employment Relations Board on Feb. 14, 2019 claiming that the administration was using a ticket quota system, which requires officers to write a certain number of tickets per shift or face disciplinary action. Such a system is not allowed under state labor laws.

The draft plan notes that an arbitration hearing was held on Jan. 23, 2020, and the arbitrator ruled that "even though no formal quota system exists, some watch commanders did have an expectation for a certain number of tickets to be written, and, therefore, an informal quota did exist."

In order to remedy this system, the reform plan notes that "the city and police administrations have taken action through direct collaborations with its watch commanders to insure that this practice ceased immediately and will not occur again."

According to Lanigan, Police Chief Kevin C. Beach "implied that the quota system was attributable to some rogue watch commanders. It was not. The ticket quota system at the Rome Police Department was enforced initially by a newly promoted Captain of Patrol under the watchful eye of the Rome Police Administration."

Lanigan said the system began by tabulating monthly ticketing statistics per officer, then eventually changed to tracking weekly and daily tickets. The administration also tracked speed radar tickets, which "were the tickets that generated the highest revenue for the city," Lanigan stated.

"When officers didn't reach the numbers desired by the Patrol Captain, they were verbally addressed for their actions," Lanigan stated. "This then evolved into officers receiving formal documentation in their personnel files for not reaching said ticket/radar numbers."

Mayor Jacqueline M. Izzo referred comment to city Corporation Council Gerard F. Feeney, who said, "The city's position is that we did not have a quota system and that the labor law was not violated. Nevertheless, the arbitrator found that we had an informal quota system and ordered us to discontinue it. As such, the leadership at the police department complied with the decision and took action to make sure no ticket quotas were being used."
Arbitration
Arbitrator Ronald E. Kowalski, with the Public Employment Relations Board, conducted the arbitration hearing in January 2020, which included evidence and witness testimony from both the City of Rome and the police union. Kowalski issued a decision on his findings at the end of April 2020.
Several patrol officers testified for the union and they said the system was in place as far back as 2014. The officers testified that they received multiple verbal counseling sessions “for low traffic enforcement/productivity”,” according to the arbitrator’s decision. One sergeant testified that he was advised by his captain to speak to a specific officer about “low-ticket productivity”.
One officer presented a physical memo as evidence that he was counseled on low ticket numbers, the arbitrator said.
According to the City of Rome officials in the decision, none of the officer’s complaints or evidence indicated the alleged quota system sought a specific number of tickets written in a specified amount of time, which is what is required by the statute against quotas. The city noted in the hearing that none of the officers were issued direct orders to write a certain number of tickets, and they were not threatened with consequences for failing to meet the alleged quota.
According to city officials, the counseling was seen as a training tool and not a form of discipline.
“The arbitrator is of the opinion that the evidence and testimony adduced at the hearing supports the claim that a type of ticket quota system does exist even if not formally enunciated by the city,” Kowalski concluded in his decision. He said this still counted as a violation of the labor statute against quotas.
The arbitrator ruled that the evidence from the officers was “consistent and credible” that one ticket a day and four radar tickets a month was expected.
“While the city has not enunciated in written form a clear quota system, it has, as evidence by the credible testimony of a number of officers, by way of supervisors, who are its agents, set out an expectation of a specific number of tickets in a set period of time to be written by officers; in effect, a quota system,” Kowalski wrote in his decision.
“It has also counseled officers for not writing sufficient amounts of tickets, which, while not discipline, further evidences it has clear expectations as to a specified number of tickets being written.”
Kowalski ruled that the City of Rome was in violation of the labor statute and it would need to stop the ticket quota system immediately.
The entire ruling can be accesed below.