Oneida opts out of retail pot sales; common council may take up alternate legislation on dispensaries in near future 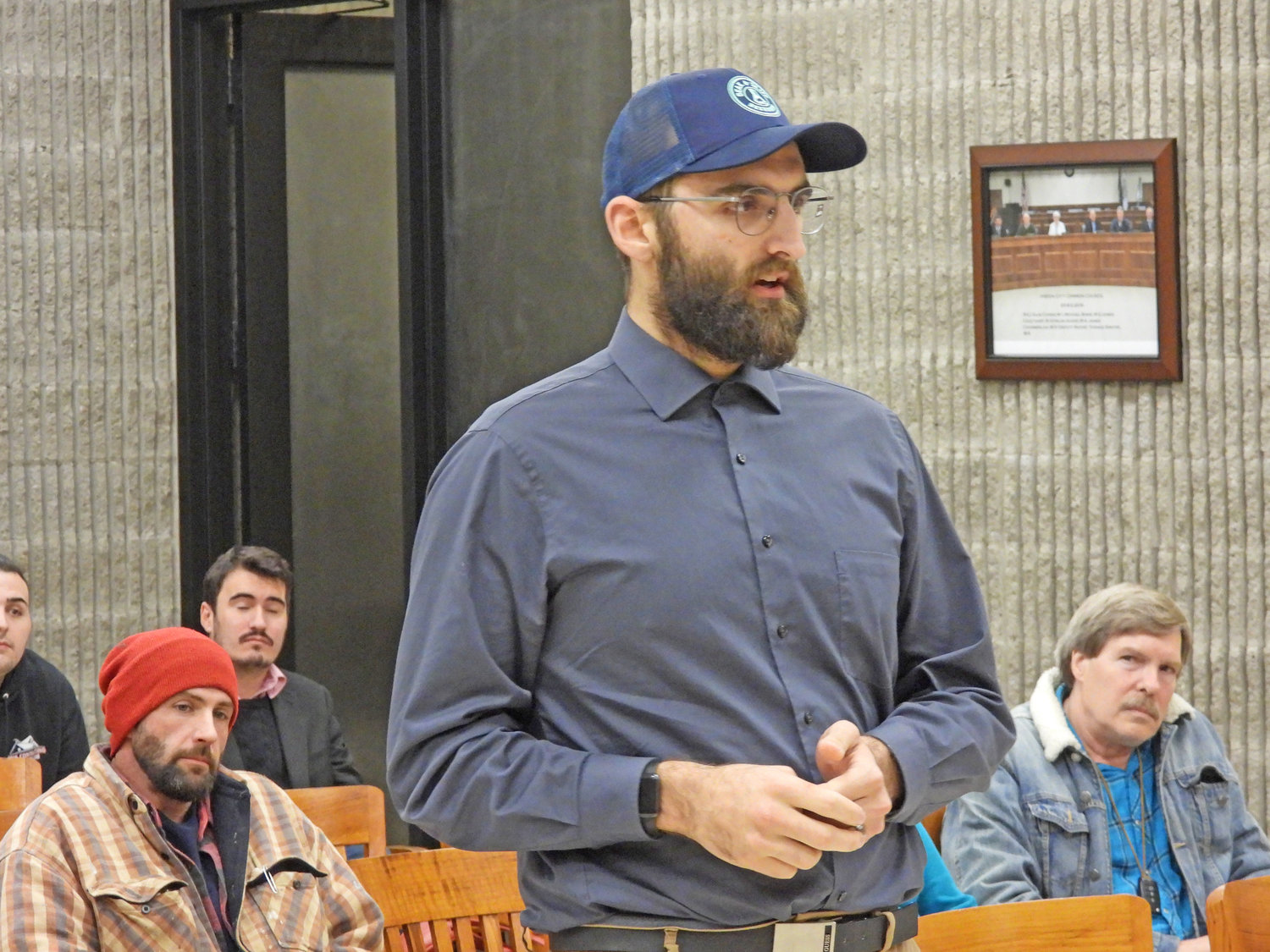 FLOATING A COMPROMISE — Jacob Cornell, co-owner of Cornell’s Greenhaus in Oneida, tells the city council they can follow Morrisville and Norwich’s example and opt out of on-site consumption establishments but opt in to retail cannabis dispensaries if they’re concerned about people driving under the influence.
(Sentinel photo by Charles Pritchard)
Posted Thursday, November 18, 2021 7:10 am
Charles Pritchard
Staff writer
email

ONEIDA — The Oneida Common Council opted out of retail cannabis dispensaries and on-site consumption establishments, but members said they could revisit the topic of dispensaries soon but on their own terms.

At Tuesday’s meeting, several people spoke before the city council, encouraging them to vote down Local Law No. 12, which related to the new cannabis laws.

Dee Schaefer, a 64-year-old resident of Oneida, who spoke in favor of dispensaries at a recent city public hearing came back to speak before the council. She challenged the city council, saying that if they’re worried about people driving while smoking marijuana, they should be concerned about people leaving bars as well.

“If one of the concerns is driving under the influence, then you have to consider alcohol as well,” she said. “I was hit head-on by a drunk driver at 3 p.m. years ago. I had to be cut out of my car.”

Another Oneida resident said there was a significant loss in tax revenue after the Oneida flood and couldn’t understand why the city council would pass up on this tax revenue. “All the arguments I’m hearing are about what could possibly happen,” he said. “I don’t think we should pass this up.”

Jacob Cornell, co-owner of Cornell’s Greenhaus in Oneida, came back to speak before the council and offered an alternative. “Look at Morrisville and Norwich have done. They’ve opted out of on-site consumption lounges but opted in for dispensaries,” Cornell said.

“If the concern is people driving home under the influence, why not opt-out of on-site consumption sites and opt-in to marijuana dispensaries,” Cornell added.

When asked after the meeting about this option, Ward 6 Councilor and Deputy Mayor Tom Simchik said the council wasn’t aware this was an option until very recently.

“The way it was presented by the state, it was our understanding that it was [all or nothing],” he said. “But because of our process, we need to schedule the public hearing, hold the public hearing and then vote on it.”

The deadline to opt-out or opt-in is Dec. 31. If a municipality doesn’t opt-out by then, they have automatically opted into licensing retail cannabis dispensaries and on-site consumption establishments. If a municipality opts out, they can opt back in at a later time.

Local Law No. 12 passed by a 4-to-2 vote with Ward 1 Councilor Carrie Earl and Ward 3 Councilor Jim Coulthart opposed. As a result, the Local Law was passed, and the city is opted out of retail cannabis dispensaries and on-site consumption establishments — for the time being.

After the meeting, Simchik said the council planned to revisit dispensaries very soon.

However, with only three meetings left before Dec. 31 and work still needing to be done, the time frame to get something in to vote on was too short. “We want to make sure we get things right — like the zoning,” Simchik said. “And the state is still coming out with regulations every day. So we just want to make sure we do this right.”

Simchik said this will give the city more control even 10 years from now by opting in under their own power. “We’d rather step out, get all of our ducks in a row, and then step back in for the dispensaries,” Simchik said.

The city will be able to dictate zoning if they opt-in under their own power — something they couldn’t do if they opted in at the meeting as it was, officials said.

“I live on Williams Street, and I have neighbors who put dishes of food out every day and every night, they go out with buckets of food,” he said. “And they’re feeding skunks, raccoons, possums, and foxes. So my neighborhood is overpopulated with them.”

Kranbuhl said he’s spoken with the Codes Department, representatives of Madison County, the Department of Environmental Conservation, and more to no avail.

“There’s no regulation,” he said. “So I’m asking city officials if they can pass some kind of ordinance or regulation, so this doesn’t happen. It’s gotten out of control.”

Kranbuhl said he’s speaking for himself and on behalf of other homeowners in the area. He’s worried about the disease these animals carry and for the safety of his dog.

“These people have these animals trained with these big spotlights,” he explained. “They go out and feed these animals by hand. I can’t go out of my house at night without turning on my floodlights to take my dog out. I’m liable to have a skunk or fox at my feet.”