Officials: Wolfspeed ‘decades in the making’ 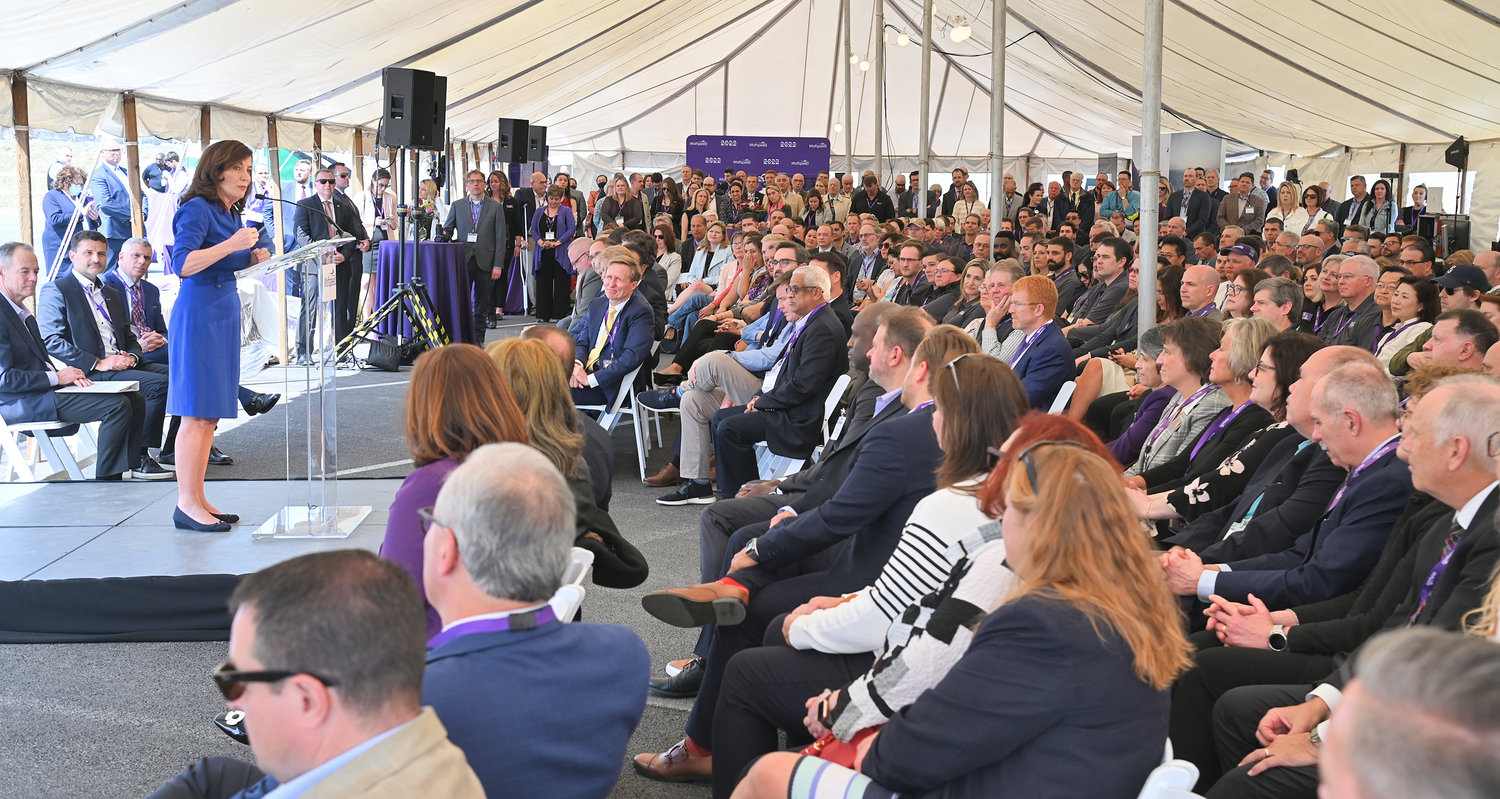 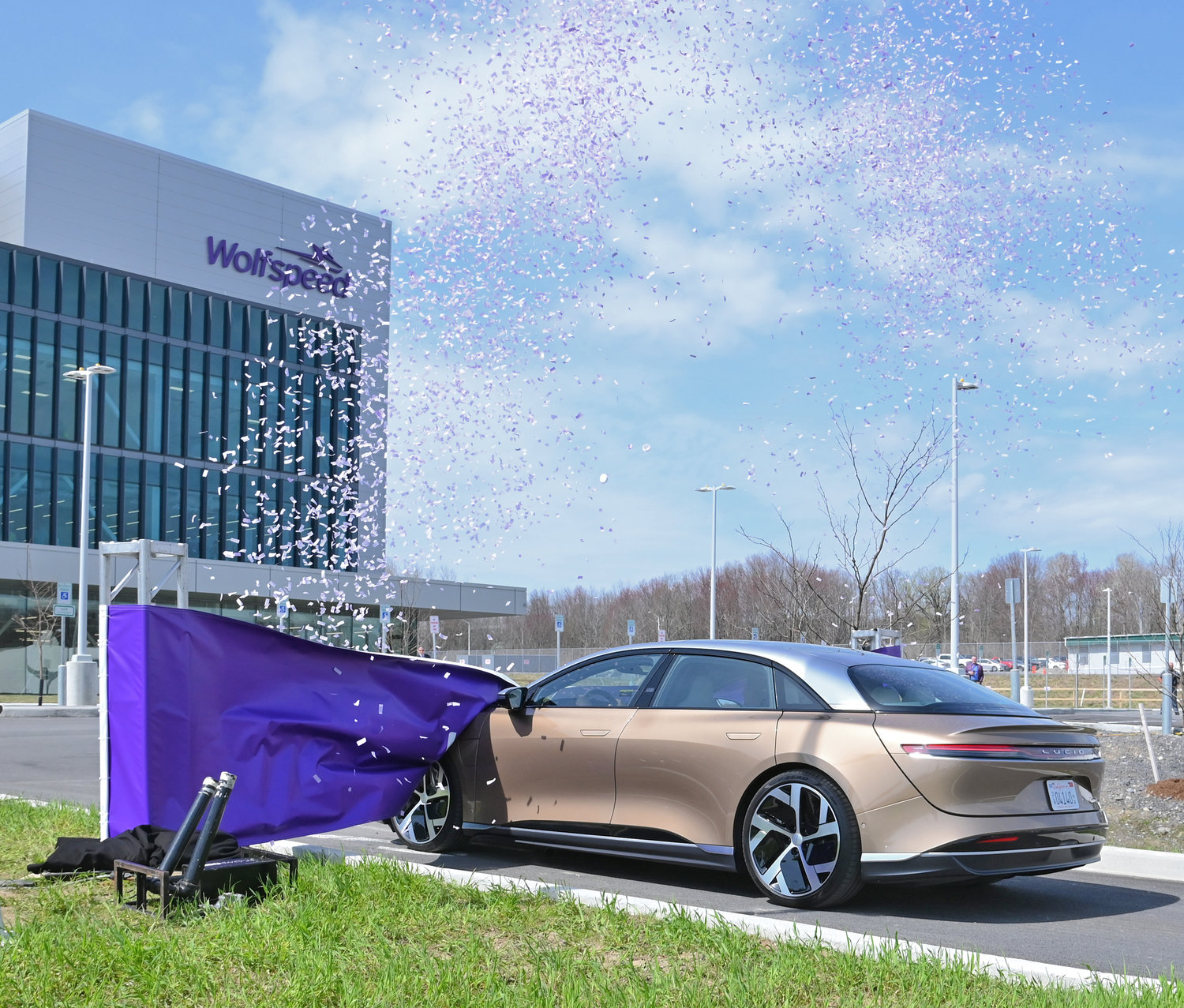 DRIVING THE AUTOMOTIVE FUTURE — The ribbon is broken at the new Wolfspeed microchip fabrication facility in Marcy with a ceremonial drive of a Lucid electric car through the banner on Monday. The car will be among those to use the silicon carbide chips to be produced at the facility. The event was attended by a host of state and local officials and economic development leaders
(Sentinel photo by John Clifford) 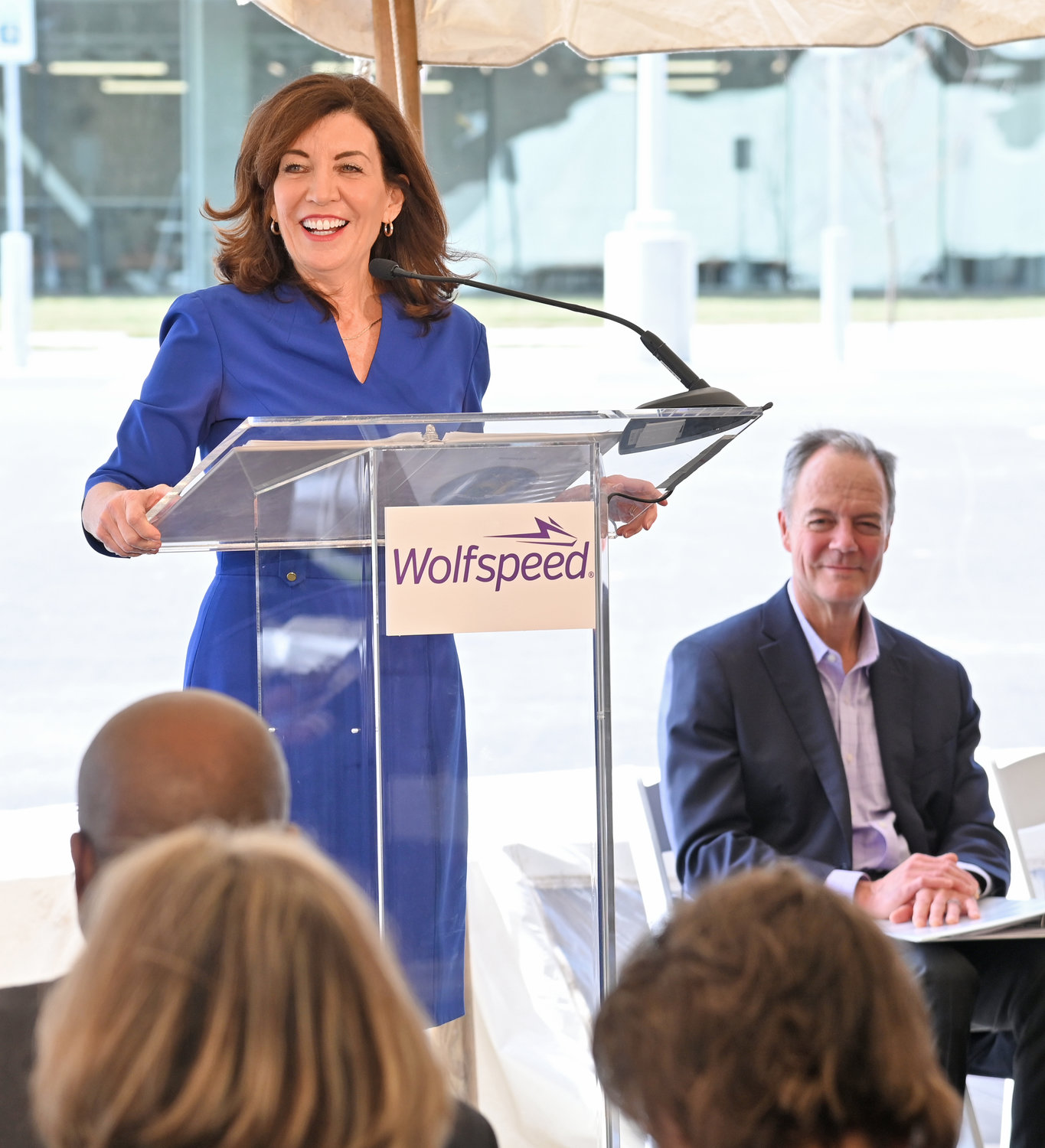 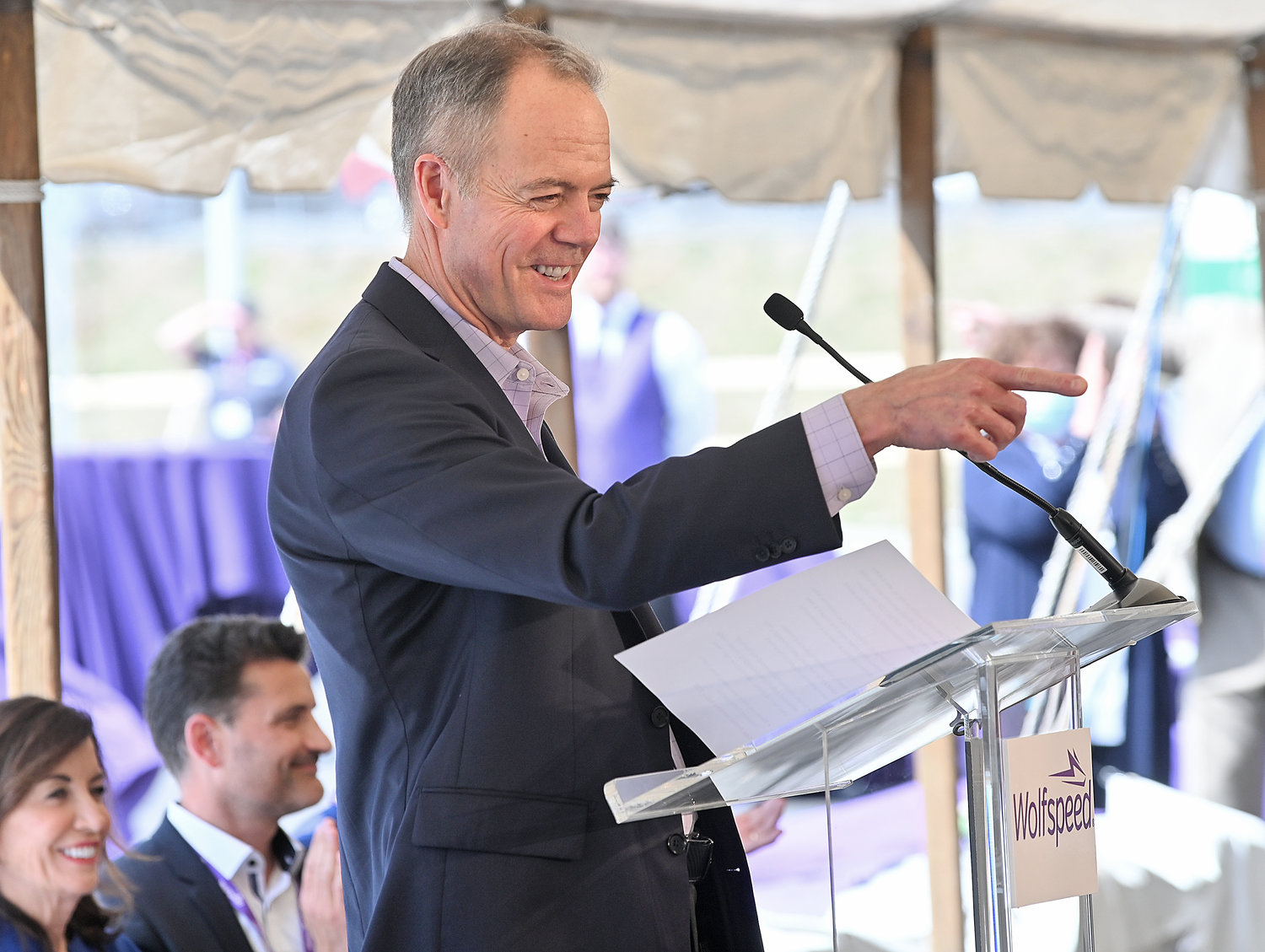 Gregg Lowe, CEO of Wolfspeed talks during a ceremony on Monday.
(Sentinel photo by John Clifford) 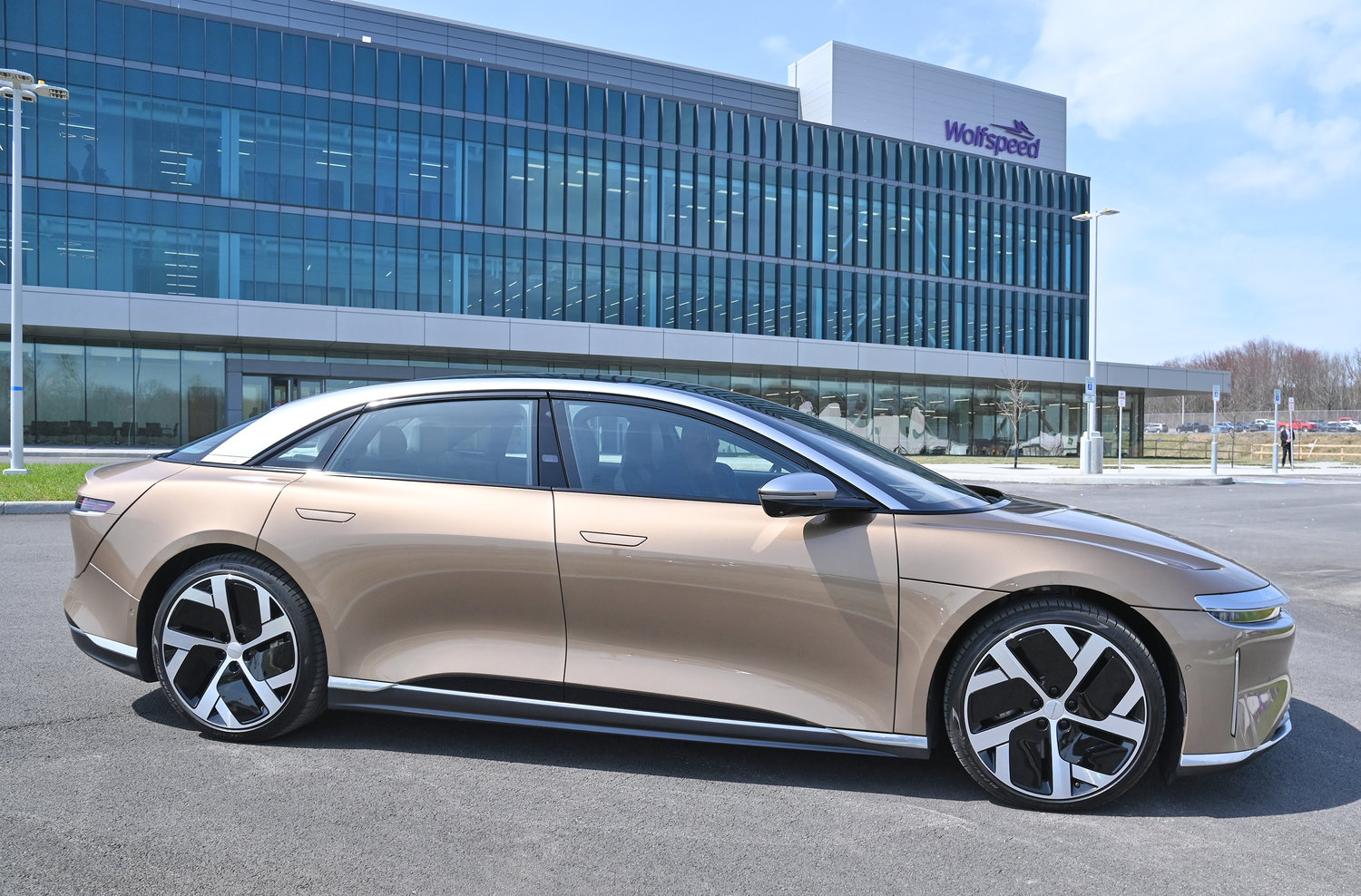 Pictured is a Lucid automobile parked in front of Wolfspeed in Marcy on Monday. The vehicle will rely on semiconductor chip processed at Wolfspeed as part of its manufacture.
(Sentinel photo by John Clifford) 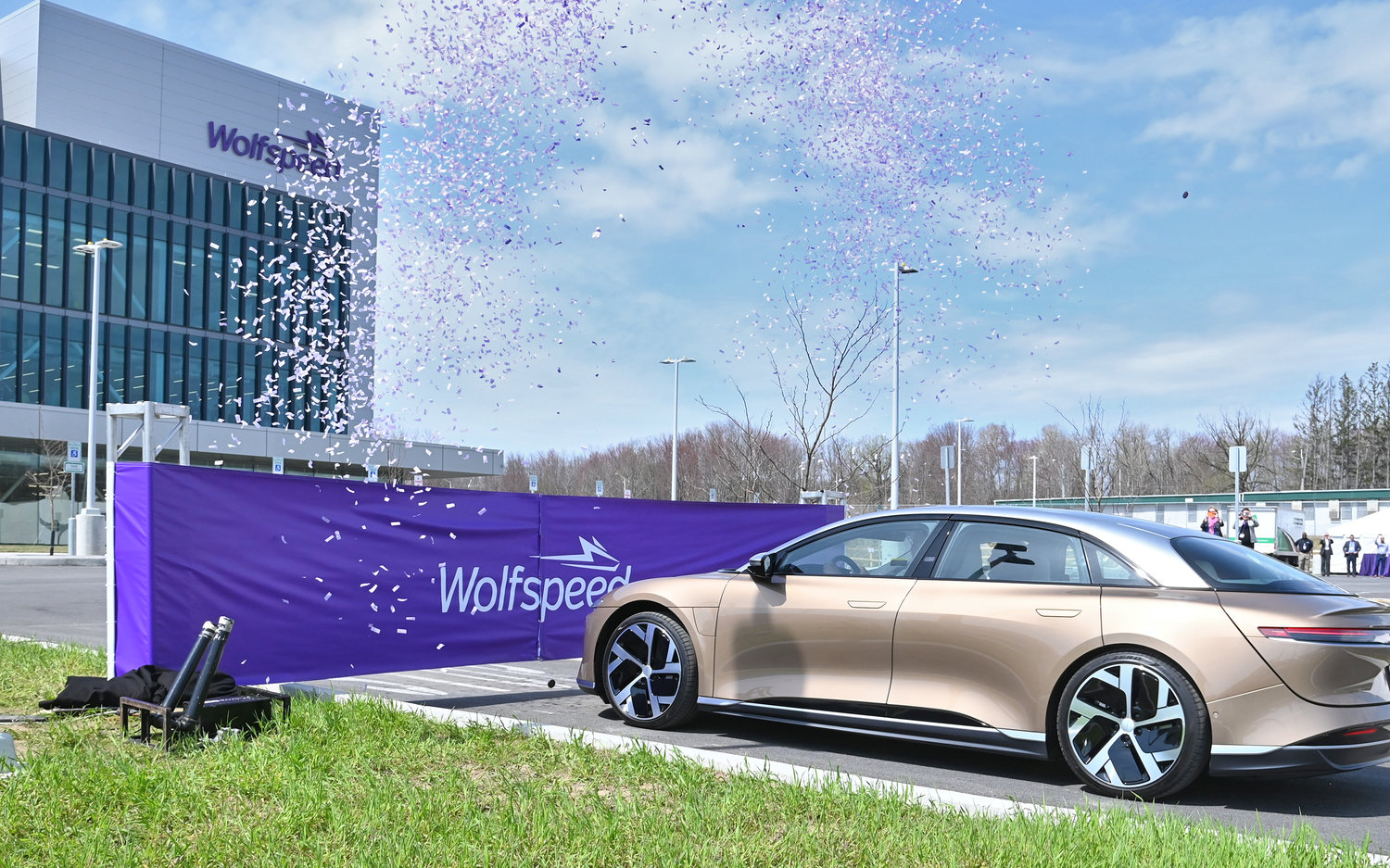 The ribbon is broken by driving a Lucid automobile to open the Wolfspeed plant in Marcy. The car will use silicon carbide chips produced at the facility.
(Sentinel photo by John Clifford)
Previous Next
Posted Monday, April 25, 2022 8:38 pm
Jolene Cleaver
Staff writer
email / twitter

“This is what the future looks like. Welcome to the future,” said Oneida County Executive Anthony J. Picente Jr. at the Monday celebratory ribbon cutting of the under-construction, $1 billion semiconductor manufacturing facility, North-Carolina-based Wolfspeed.

The facility is the centerpiece of the Marcy Nanocenter at SUNY Polytechnic Institute’s 434-acre greenfield campus developed for semiconductor and advanced technology manufacturing facilities.

“This has been decades in the making,” he said to the large gathering in the Wolfspeed parking lot, also pointing out that talks to bring the semiconductor industry to the Mohawk Valley began in 1998. There have been hurdles, Picente said, but the vision of the Mohawk Valley being part of an upstate New York tech corridor — or “silicon carbide valley” as Gov. Kathy Hochul said at the Monday happening — are now a reality.

Wolfspeed has served as the brand for the company’s silicon carbide materials and semiconductor devices business unit for the past six years. The company not only manufactures semiconductor chips for the automotive industry, but solar, data farms and other applications around the world.

The 200mm-capable power wafer fabrication facility will be the largest such silicon carbide facility in the world, officials say.

Along the road to the present, Gregg Lowe, the Chief Executive Officer of Wolfspeed, said that over two years ago the site was nothing but a muddy field, but he was made to feel welcome by the local community when plans began to fuse together for the facility. “Now, it is a field of opportunity,” he said.

In other remarks at the event, Hochul praised the strong Upstate New York work ethic for making the project a reality which would help jumpstart the upstate New York economy, and added that the state was committed to finding synergies and assistance to make sure there would be skilled employees for jobs.

This, all to make more partnerships possible.

In a new development announced at the event, Lowe said a multi-year deal had been inked with (California based, Arizona manufactured) Lucid Automotive, which will be relying on silicone carbide chips from Wolfspeed in the manufacture of their luxury electric automobiles.

Lowe said there will be more to come as fabrication capacity continues to grow.

As of Monday, construction was ongoing and Wolfspeed representatives confirmed about 10% of the total tool installation was completed. Full ramp up is expected by 2029.

Wolfspeed has already hired about 265 people — largely engineers and facilities workers — and has committed to create more than 600 direct new jobs by 2029.

It has long been touted that the fab plant — located next to SUNY Poly’s Utica campus — would open the door for groundbreaking research and future recruitment opportunities for students.

However, Hochul has met opposition in recent months after an idea she floated in her beginning of the year state of the state address that would move the Marcy site of the SUNY Polytechnic Institute College of Nanoscale Science and Engineering and give it to the University at Albany.

Since then local officials have taken action and spoke out against the idea.

Among them was Picente, who sent a letter to Gov. Hochul in January expressing concern over the proposal. That letter was also signed by Onondaga County Executive Ryan McMahon, New York State Senator Joseph Griffo and New York State Assemblywoman Marianne Buttenschon.

That group, along with other community leaders, including Mohawk Valley EDGE President Steven DiMeo and Griffiss Institute President and CEO, Heather Hage, have been keeping pressure on the issue through constant calls and meetings with members of the Governor’s office.

“Since its inception, SUNY Poly has been embraced by the region. Wolfspeed, Rome Labs, the Innovare Advancement Center and the Griffiss Institute, among others, are investing heavily in joint research and workforce development programs … Regional leaders believe that diminishing SUNY Poly in any way, could move efforts to advance the region backward,” noted a county statement issued in recent months.

In a Monday, Jan. 31 statement, the state university added, “SUNY Polytechnic Institute has a history of receiving strong support from New York State, SUNY System Administration, and especially from our regional leaders, a number of whom signed a letter outlining their concerns about a proposal to split SUNY Poly’s College of Nanoscale Science and Engineering from SUNY Poly. We share many of their concerns. … We are confident that SUNY Poly will continue to build upon this approach which has grown interconnected research and career opportunities across both campuses—not only for one region, but for all of New York State.”

When asked about the status of the plan on Monday, Hochul told news reporters that she didn’t wish to give any definite details about the ultimate plan, but said she was having productive conversations on the topic with state and local elected officials.

On the heels of the Monday ceremony, officials issued statements regarding the project.

-Assemblywoman Marianne Buttenschon, D-119, Marcy, stated, in part: “...Technology is advancing quickly, and computer chips are an essential part of so many industrial and consumer products. I’m proud that this cutting-edge manufacturing facility is opening in our region. It’s exciting to see a plant in our community producing next generation silicon carbide products. The Mohawk Valley offers tremendous resources for advanced manufacturing with young scientists and engineers being educated nearby at SUNY Poly and advanced research taking place at the US Air Force Research Laboratory in Rome, this community represents an ideal ecosystem for high tech manufacturing. I look forward to the next developments in this field.”

State Senator Joseph A. Griffo said, “The opening of Wolfspeed at the Marcy Nanocenter on the SUNY Polytechnic Institute campus in Marcy is the result of a forward-thinking vision and a great deal of hard work by a number of local officials and economic development organizations. Wolfspeed will enhance and strengthen communities and contribute to the future economic growth and vitality of the Mohawk Valley and Upstate New York.”

Utica Mayor Robert Palmieri said, “The opening of Wolfspeed is proof that when we all work together great things can happen in the Greater Utica region. Wolfspeed is a catalyst that will change the landscape of our city, county and state. It’s also an indication of how far we have come and how much more is possible for the future of our region. I’d like to thank Governor Hochul for her steadfast support in seeing this project through and I look forward to working with her to build on the future the Marcy Nanocenter helped make possible.”

City of Rome Mayor Jacqueline M. Izzo said, “The Mohawk Valley took a well deserved victory lap today as we officially welcomed Wolfspeed to our community. After decades of site preparation and global marketing to position our region as a leader in the next generation of chip development, Wolfspeed will become the anchor facility establishing the Mohawk Valley as a leader in the advanced manufacturing of wafers containing silicon carbide. The company has already made an investment in scholarships and pipeline development of the workforce at SUNY Poly and MVCC, which will lead to high tech employment opportunities in the new Mohawk Valley Fab. This would not have been possible without the support of Governor Hochul, Empire State Development, EDGE and our local and state elected officials all working together to enable the Mohawk Valley’s high tech corridor’s continued growth for decades to come and strengthening our area’s ability to attract the best and brightest to these new and emerging technologies.”

Mohawk Valley EDGE President and CEO Steven DiMeo said, “New York State and our local partners in government have made steadfast commitments over the last decade to further Upstate’s position as a leader in semiconductor research and fabrication with investments in Marcy Nanocenter and the I-90 innovation corridor. These investments to create a truly shovel-ready site, coupled with a strong partner at SUNY Polytechnic Institute and Mohawk Valley Community College, created an environment that was critical to secure Wolfspeed as an anchor tenant at Marcy Nanocenter. We want to thank Governor Kathy Hochul and Empire State Development for their support in furthering plans to build the I-90 semiconductor and advanced electronics corridor that is connecting the Capital Region with the Utica-Rome and Syracuse MSA, which will benefit with the pending passage of federal legislation to support the semiconductor and advanced electronics sector.”