New variant cause for concern, not panic, Biden tells U.S. 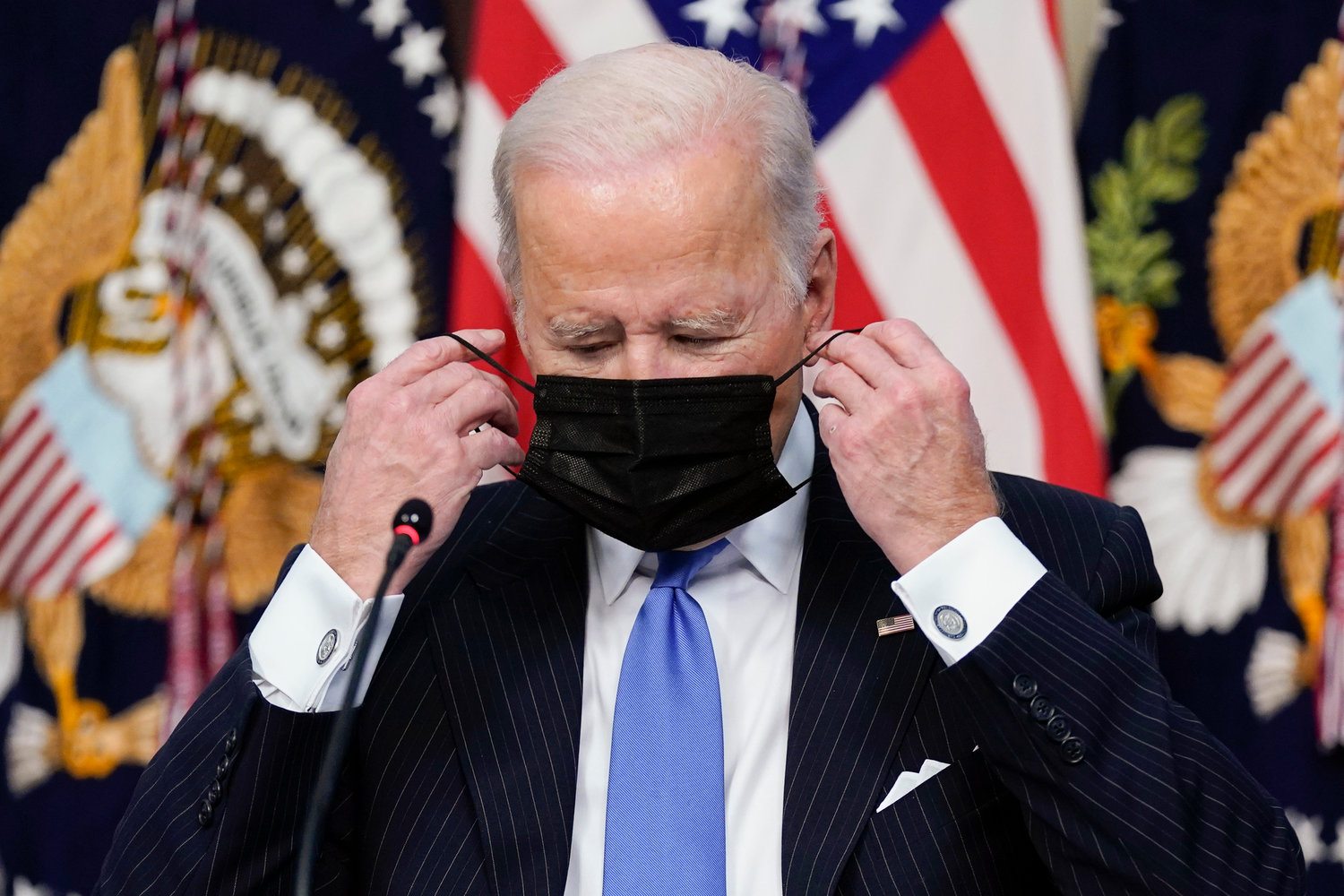 MASK TIME — President Joe Biden adjusts his face covering as he speaks during a meeting with business leaders about the holiday shopping season, in the library of the Eisenhower Executive Office Building on the White House campus Monday in Washington.
(AP Photo)
Posted Monday, November 29, 2021 9:45 pm

WASHINGTON (AP) — President Joe Biden called the new coronavirus variant omicron a cause for concern but “not a cause for panic” Monday and said he was not considering any widespread U.S. lockdown. He urged Americans anew to get fully vaccinated, including booster shots, and return to face masks indoors in public settings to slow any spread.

New variant will reach US

Speaking Monday at the White House, Biden said it was inevitable that the new variant would reach the U.S., but he also said the country has the tools necessary to protect Americans — particularly the approved vaccines and booster shots.

When omicron arrives, and it will, Biden said, America will “face this new threat just as we’ve faced those that have come before it.”

He appealed to the roughly 80 million unvaccinated Americans aged 5 and up to get their shots, and for the rest of the country to seek out booster shots six months after their second dose. He also encouraged everyone to get back to wearing face masks in all indoor public settings — a pandemic precaution that has fallen out of use across much of the country.

Separately, the Centers for Disease Control and Prevention broadened its recommendation for COVID-19 booster shots to include all adults because of the new variant. The agency had previously approved boosters for all adults, but only recommended them for those 50 years and older or living in long-term care settings.

Biden was joined by Dr. Anthony Fauci, the nation’s top infectious disease expert and the president’s COVID-19 adviser, who said earlier Monday that scientists hope to know in the next week or two how well the existing COVID-19 vaccines protect against the varian t, and how dangerous it is compared to earlier strains.

The new variant poses the latest test to Biden’s efforts to contain the pandemic, mitigate its impacts on the economy and return a sense of normalcy to the U.S. during the holiday season.

“This variant is a cause for concern, not a cause for panic,” Biden said, as U.S. financial markets rebounded Monday after falling sharply on Friday. The White House said there were no plans to curtail Biden’s travel as a result of the new variant.

Biden last week moved to restrict travel from South Africa and seven other countries in southern Africa, effective Monday, in a bid to give scientists time to learn more about the new variant, and for more Americans to get vaccinated before it hits the U.S. South African officials have argued they are being punished for speedily identifying and reporting the new variant.

As omicron spreads across the globe, White House press secretary Jen Psaki said Monday, “we will continue to assess what steps we need to take to protect the American people.”

Some other nations are reinstating severe travel and business lockdowns to prevent the omicron variant from spreading, but Biden indicated the U.S. was not following suit.

“If people are vaccinated and wear their mask, there’s no need for lockdowns,” he said.

Fauci said earlier on “CBS Mornings” that limiting travel from the countries where omicron was first identified “buys you a couple of weeks because if you can keep things out in force for a couple of weeks you can do a lot of things.”

Pharmaceutical companies are already adjusting their existing COVID-19 vaccines to better attack the omicron variant, but Fauci said Americans should make it a priority to get either their first shots or a booster dose now, rather than waiting for a new formulation.

“I would strongly suggest you get boosted now,” he said.

He added that depending on what scientists learn about the omicron variant in the coming weeks “we may not need” targeted boosters to contain that strain of the virus.

Biden said his administration was “sparing no effort at removing all roadblocks to keep the American people safe,” including working with drug manufacturers on potential new boosters and testing targeted specifically at the new variant.

Any omicron-specific vaccine probably could not begin to be produced for another two or three months, so getting boosters now is a “very important initial line of defense,” Dr. Paul Burton, chief medical officer for the vaccine-maker Moderna, said Monday.

Burton said Moderna and other vaccine companies are testing existing COVID-19 vaccines to determine how effective they are against the omicron variant.

“If we need to manufacture an omicron-specific variant, it’s going to take some weeks, two to three months is probably what we’re looking at to be able to really begin to manufacture,” Burton told ABC.

Noting that the new variant, like earlier ones, sprang up overseas in areas with lower vaccination rates, Biden said it was both a moral imperative and in America’s self-interest to speed up global vaccinations. He noted that the U.S. has already donated more than 275 million doses — more than the rest of the world combined — and is on pace to deliver more than 1.1 billion doses globally by September 2022.

“Now we need the rest of the world to step up as well,” Biden said. “We can’t let up until the world is vaccinated.”

As the holiday season got underway, Biden tried to reassure shoppers that his administration was working to ease supply chain problems. Businesses are working to overcome lingering effects of COVID-related shutdowns and now issues arising from the strong recovery that has generated more demand than many ports, manufacturers and retailers can handle.

The president spoke Monday with the CEOs of Best Buy, Food Lion, Samsung, Etsy and Walmart, among companies. The corporate leaders reassured Biden.

“While we’re all concerned about the supply chain, we have more inventory than we did a year ago, and we have the inventory that we need to be able to support the business,” said Walmart CEO Doug McMillon. “And we are seeing progress. The port and transit delays are improving.”