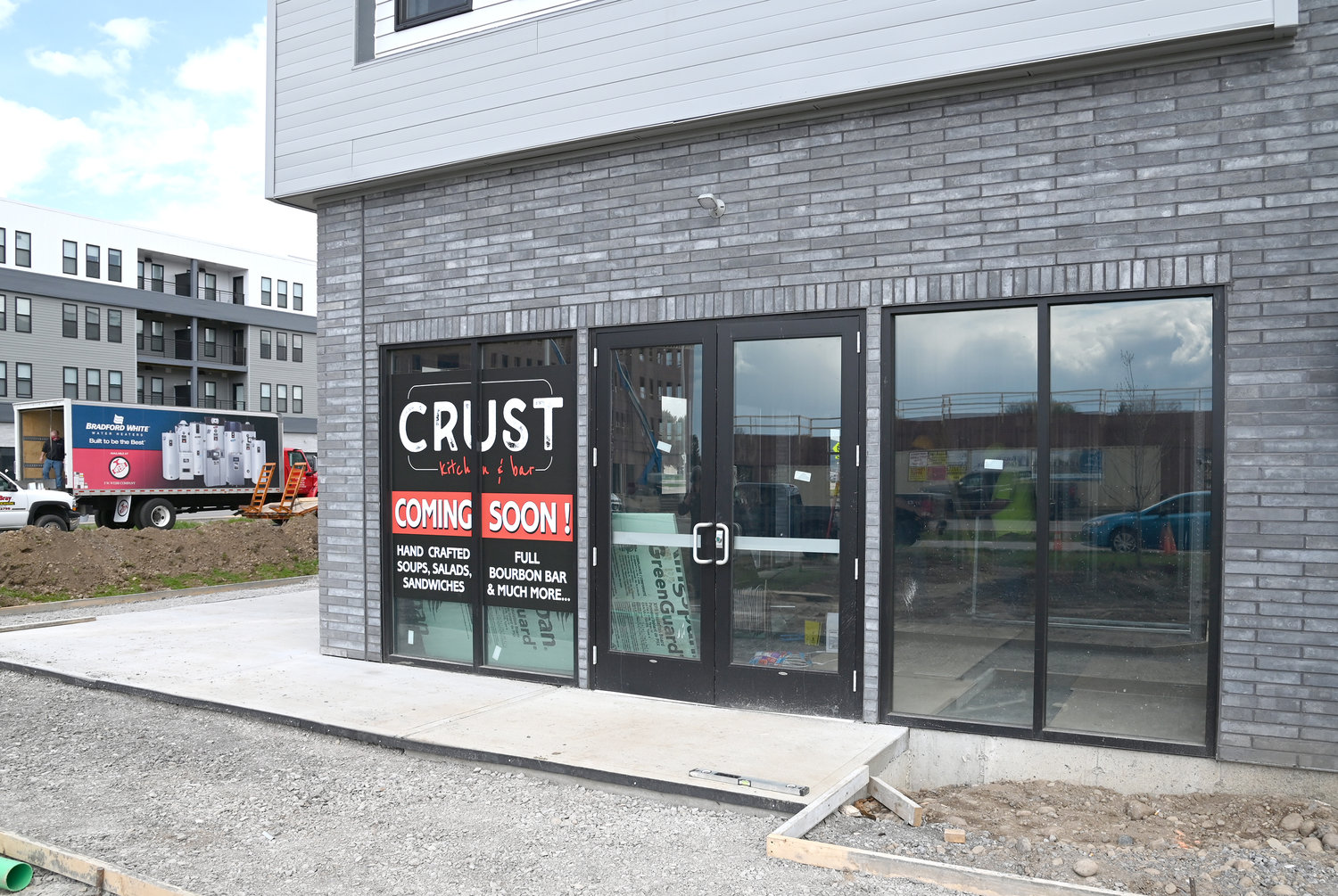 There’s a new original eatery coming to town that promises to be like no other, and it’s part of the latest development efforts at Griffiss Business and Technology Park.

Crust Kitchen & Bar, located at the new Air City Lofts apartment complex at Building B, Suite 101, 86 Hangar Road, will offer soups, sandwiches and salads, along with a full bourbon bar that adds a unique flare that is unlike any other local establishment.

Chris Destito, part of the fourth generation of the Destito family running The Savoy restaurant on East Dominick Street, has teamed up with friend Frank Belmont in a new business venture with the eatery. Belmont returned to Rome after spending about five years in Syracuse, and has a total 22 years of experience as a manager/general manager in the restaurant business.

“I’ve done everything in the business,” Belmont said, as the business partners stood outside their 1,728-square-foot restaurant that’s still under construction Monday morning.

Destito said all the sandwich meats will be cooked and prepared right on premise — turkey, ham, roast beef and prime rib — with an in-house smoker.

“We’ll be roasting all the meats in-house,” he said. “There will definitely be a decent-sized kitchen so we have the ability to do a lot of stuff out of it,” Belmont added.

“We’ll be making as much as we can from scratch. What we’re doing is a lot of specialty combinations, and the ingredients we’ll be using are not common around here. We want to try and put our own take on your old deli-style” foods, Belmont said.

Destito said the restaurant will also have refrigerated pre-made to-go items, like sandwiches and salads, so GBTP employees can pop in for a quick bite and go while on their lunch breaks.

The pair has also formed a partnership with Silver City Baking Company, 170 Kenwood Ave. in Oneida, to provide their breads and baked goods. Owner Andrea Maranville was a finalist in the Great American Baking Show — Holiday Edition that aired on the ABC network in 2018, finishing as runner-up. She also serves as a seasonal pastry chef at the Chateau on the Lake in Bolton Landing in Warren County.

Andrea “has even been on the Food Network. She’s a phenomenal baker, so we’re very excited that we joined in with her,” said Destito.

Crust Kitchen & Bar is the first business to lease space at the new Air City Lofts. Belmont and Destito said they know of a hair salon that will be located directly next door to their business, and hope others will grow in the area.

As for the types of businesses they’d like to see sprout up around them at the park, Destito said, “Anything that brings people here.”

Businesses “have been expanding up here, and we want to be a part of it,” he said. “This has been a two-year project and it’s had its ups and downs, but we’re definitely getting to a point where we’re ready to get in there.”

Without any COVID restrictions, the restaurant will seat up to 38, and the bar will seat eight. An outdoor patio will also serve patrons during the spring, summer and early autumn months. Exact hours have not yet been determined, but Destito said they plan to serve breakfast, lunch and dinner for the later half of the week.

The friends had talked about their business venture on and off for some years, often sharing conversation and company over a drift of bourbon — which sparked the idea of turning the restaurant into a bar that specially featured their favorite spirit. There are even plans to incorporate it into a few dishes, “so they have a bourbon flare to it,” Destito said.

After growing up at The Savoy and putting his “heart and soul” into the family-owned Italian restaurant for several years, Destito said he came to the realization that he wanted to try to go into “a new direction.”

“We (he and Belmont) kept talking about it an saying this is what would make a good restaurant, and at one time I just came back to Frank and said, ‘Are you still interested in doing that with me?,’” said Destito.

Trust in forming a new business partnership was a “culmination of venting, learning the hard way and bourbon,” he laughed.