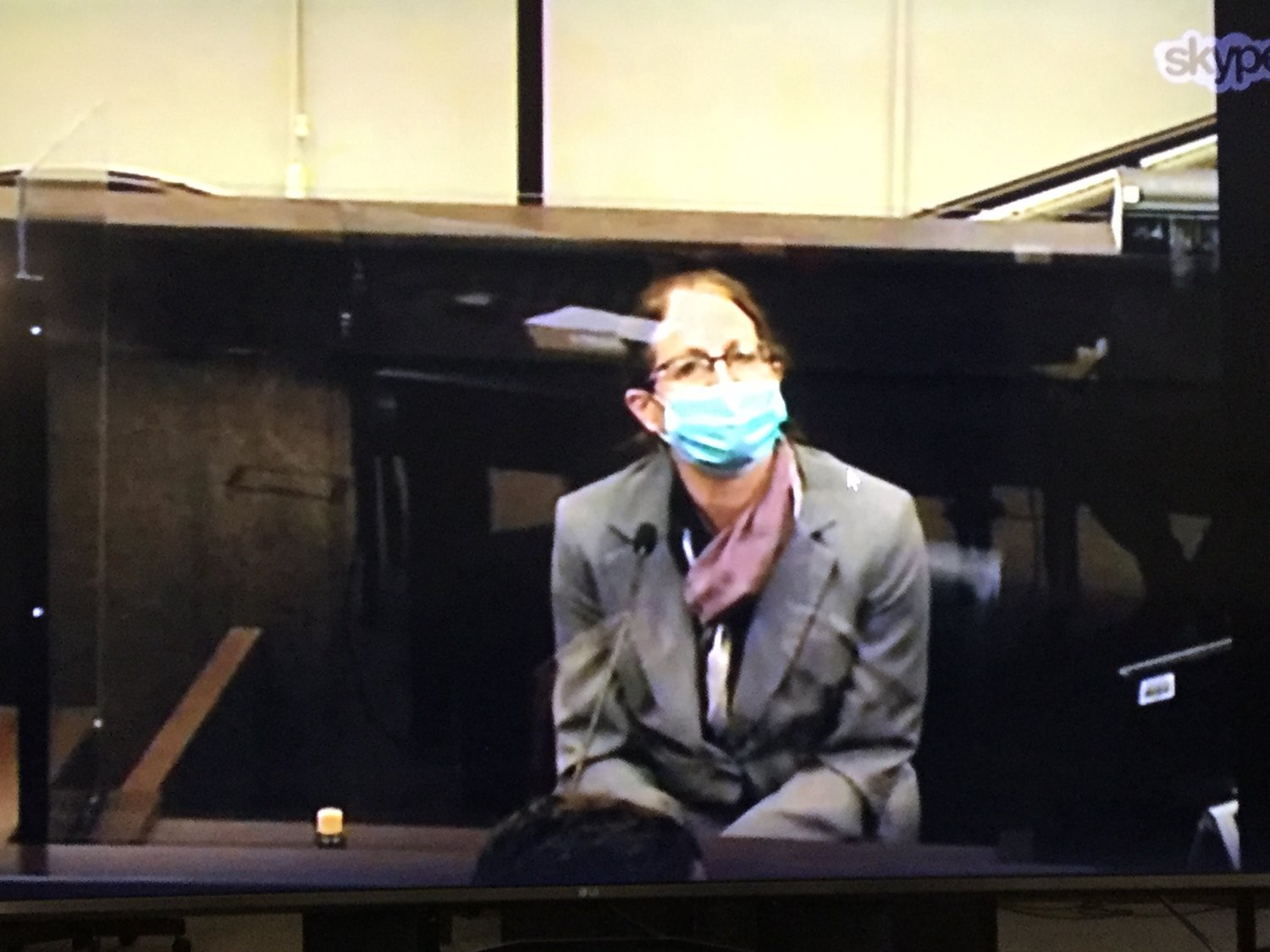 FORENSIC ANTHROPOLOGIST — Dr. Ann Bunch is a forensic anthropologist who was brought in to assist on the autopsy of Kerrilee D’Avolio. Bunch testified on Thursday about reconstructing Kerrilee’s skull and finding the entrance and exit wounds of the bullet.
(Sentinel photo by Sean I. Mills) 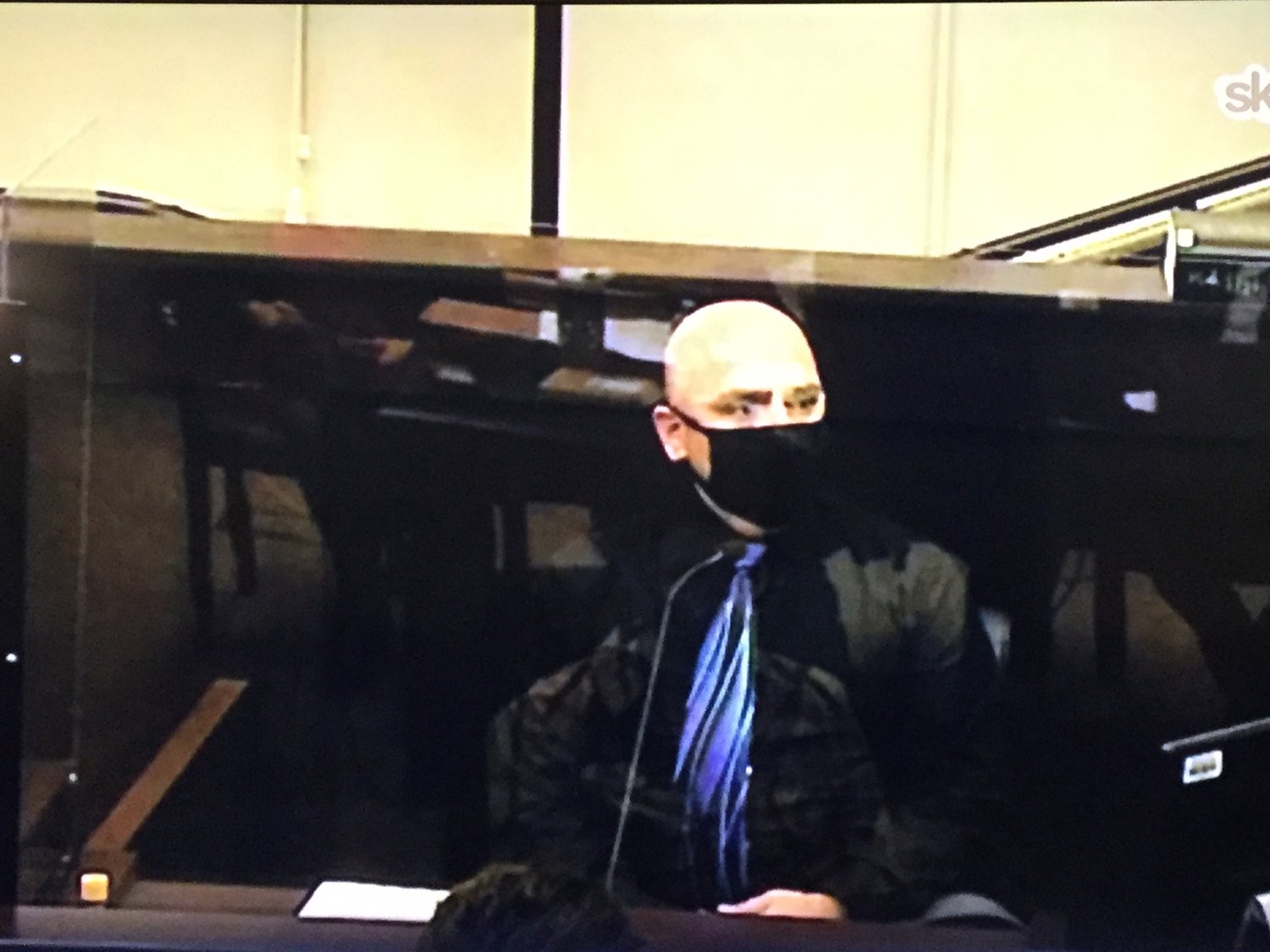 'BOOM, BOOM' — Joseph Manuele, a neighbor of the D'Avolio family, testified for the defense on Thursday that he thought he heard a quick "boom, boom" sound from the D'Avolio home on July 27, 2019, the night before Kerrilee was killed.
(Sentinel photo by Sean I. Mills)
Previous Next
Posted Friday, October 30, 2020 11:48 am
Sean I. Mills
Staff writer
email / twitter

The first witnesses for the defense in the murder trial of Rome man Jason P. D’Avolio on Thursday were a pair of neighbors who reportedly heard a few short “pop” and “boom” sounds from the D’Avolio home — the night before Kerrilee was killed.

Meanwhile, the prosecution rested their case Thursday morning. The jury is expected to begin deliberating on Wednesday.

Jason D’Avolio himself is expected to take the stand in his own defense on Monday. D’Avolio, age 48, is charged with second-degree murder and is accused of shooting his wife, Kerrilee, in the back of the head with a rifle at their Belmont Street home on the night of July 28, 2019. He is charged with concealment of a human corpse and is accused of cleaning up the home and putting Kerrilee’s body in a dumpster.

According to testimony in the case, the body was then packed into garbage at a transfer station before it was found in a trailer.

The first two witnesses for the defense were Joseph Manuele and Wayne Brown, two neighbors to the D’Avolio home at 820 Belmont St. Both men testified that they were at home in the 9 p.m. hour on July 27, 2019, the night of the Honor America Days fireworks in Rome.

Manuele told the jury that he was standing outside at about 9:50 p.m. waiting for the fireworks to start. He said he saw a single firework launch, a possible test firework, and then he heard, “just behind me, two successions, like boom boom.”

“I thought, maybe, somebody had their own personal fireworks, but they didn’t sound like fireworks,” Manuele testified. He said the sounds came from the house next to 820 Belmont St.

“It sounded more like gunshots,” he told the jury.

Manuele testified that he went back into his home and did not call police. About five minutes later, he said the fireworks started and he went back outside to watch.

Brown told the jury that he was outside on his porch and he heard two suspicious sounds during either the grand finale of the fireworks show or after the fireworks had ended.

“Two or three little pops in between” the fireworks, Brown told the jury. “I thought they were duds going off.”

Brown said the sound was different from a regular firework. He said the sounds “could have been” gunfire, but he did not know for sure. He did note that many neighbors in his area had been setting off their own personal fireworks “all the time” in the end of July.

A third defense witness on Wednesday, another neighbor, told the jury that she thought she saw Kerrilee’s sedan pull into the driveway of 820 Belmont sometime during the fireworks show, and that someone she thought might be Kerrilee went inside the home for a “few minutes” before returning to her car and leaving. The third neighbor told the jury that the car then returned after the fireworks were over and parked on the side of the road at 820 Belmont.

The final witnesses for the prosecution were a pair of specialists who conducted the autopsy on Kerrilee D’Avolio.

Dr Carolyn Revercomb is the chief medical examiner for the Onondaga County Medical Examiner’s Office and she took the lead in the autopsy. Revercomb told the jury that Kerrilee died from a “perforated gunshot wound that entered the back of her head and exited the front.”

Revercomb also noted two “superficial” bruises — one on the back of an arm and one on Kerrilee’s buttocks — that occurred before she died. She said there was no indication that Kerrilee was intoxicated and no signs that she had ingested any illegal drugs, though one drug screening was inconclusive in regards to some of the chemicals in cocaine. Revercomb noted it was “very unlikely” that Kerrilee had taken cocaine.

Revercomb told the jury that she had conducted more than 5,000 autopsies in her career as a forensic pathologist and had never seen anyone with a self-inflicted gunshot wound to the back of their head from a rifle. Though she noted that she could not say if Kerrilee’s head was tilted back or forth when she was shot.

Dr. Ann Bunch is a forensic pathologist at SUNY Brockport who said she used to work with the military to reconstruct bodies and skulls taken from old battlefields. She told the jury she was brought in to assist in reconstructing Kerrilee’s skull due to the damage from the gunshot and the degradation the body had sustained at the transfer station.

Bunch testified that she was able to piece the bones back together and discovered the bullet’s entrance wound at the back of the skull. Based on the size and shape of the entrance wound, Bunch said the shot went “straight forward” into the skull, as opposed to angled up or down.

Bunch also said there was evidence in the autopsy that confirmed the use of a rifle instead of a smaller firearm.