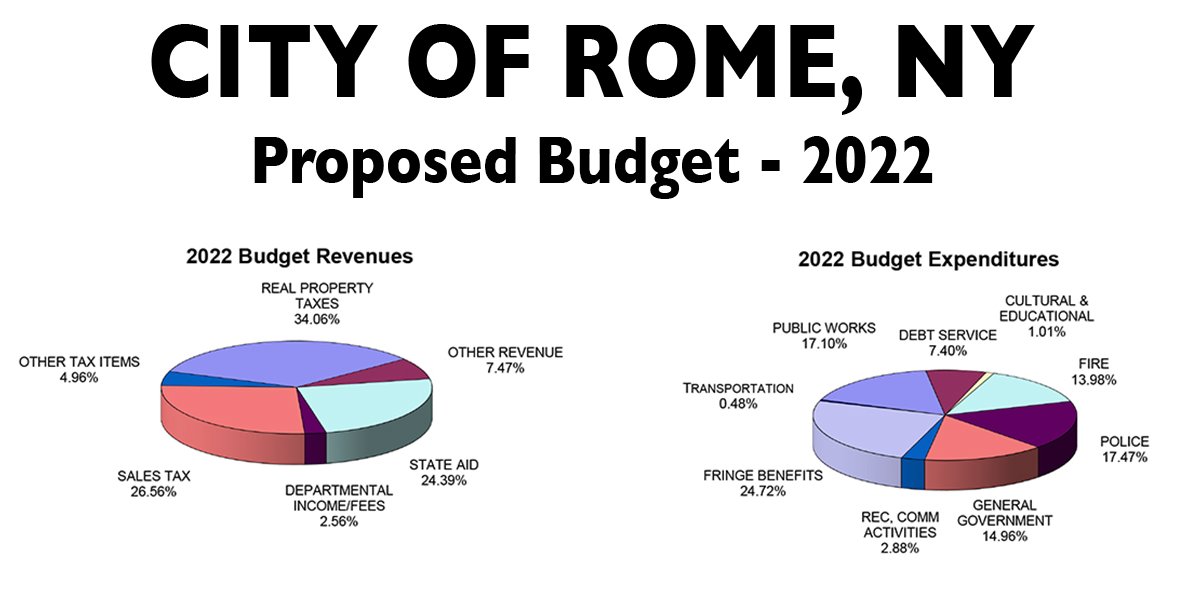 For the fifth consecutive year, there will be no general property tax increase in the city’s proposed $45.7 million 2022 budget presented by Mayor Jacqueline M. Izzo to the Common Council Wednesday evening.

The spending plan, which will now be scrutinized by councilor’s who can, by charter, eliminate but not add expenses to the budget.

The city councilors have until the end of October to hold budget review sessions with city officials and department heads, propose any reductions in funding for specific items and then approve a budget.

Among the items included in the mayor’s budget proposal is funding for the purchase of body cameras for Rome Police Department. The cameras — or rather the delay in approving a camera for use and then the purchase of cameras — have been an item of recurring discussion and concern of speakers before the Common Council for the past several months. The cameras are included in the city’s state-mandated police reform plan, which was passed earlier this year.

“That’s a significant expense, so the chief and police department needed time to do the proper research and to find the best product out there,” the mayor added.

Izzo said the department’s body cameras and software “integrate” well with other local police agencies and with the county District Attorney’s Office. With bail reform, the mayor said the departments will be better and more efficiently able to share information.

“It just made sense that we’d all be no the same page,” she said.

Izzo said the planning and economic mitigation means taken by the city to prepare for the impact of the COVID-19 pandemic in 2020, continued to play a role in planning for the 2022 proposed spending plan.

Besides careful spending and planning ahead, this budget “is a credit to city employees who participated in the Work Share program in 2020, which resulted in a 10% cut in the line budget across the board,” the mayor said.

“We didn’t want to be in a position where we would let our expenses accrue and not know if we would have the revenues” to cover them.

Izzo said that federal stimulus money is not part of the proposed budget.

“The aerial and pumper trucks” for Rome Fire Department, “that were bonded for, will be paid for by the stimulus money, which will be about $2 million off the backs of the local taxpayers,” said Izzo.

Rome has seen an increase in sales tax revenues in recent years. As the number of those living within the community grows and more people are spending and investing their money into the city, the more sales tax revenues will continue to increase, the mayor said. Sales tax revenues are anticipated to keep growing in 2022, she added.

“We’ve been able to gradually increase the city’s fund balance every year,” said Izzo, adding that the city has been cautious about dipping into its reserve funds. “What the pandemic showed us is that we should have money in the bank.”

If it were not for the stimulus money or a COVID vaccine, “Economically, everyone would be in a much different position,” she added.

In the proposal, among the largest increases in the proposed spending plan is $100,000 to the Codes Department for demolition of potential structures on either River Street and/or Crescent Drive that may need to be taken down as a result of the August flooding.

While requested for the 2021 budget, Izzo said the city is fulfilling the purchase of an $8,500 rescue boat for Rome Fire Department in the proposed 2022 spending plan.

The rescue boat — “We needed that during the flooding and we were lucky we were able to use an old truck,” said Izzo, adding that the vehicle could have stalled when water reached past the height of the tires.

The fire department “requested the rescue boat last year in a zero-increase budget, and it was not funded,” Izzo said. “So, we will be fulfilling that request next year. It was a good lesson to be learned during the storm crisis.”
As for the purchase of a new pumper and aerial truck next year, “Engine 1 and the aerial truck are 15-plus years old,” the mayor added.
Due to $1.6 million in CHIPS aid, which is state funding applied to projects related to city streets, there will be no increase for equipment, explained City Treasurer David Nolan.
The CHIPS funding “comes in as revenue and goes out as expenses, which reduces the amount of street bonding” for roadwork, he said.
Izzo said the city also switched to a leasing program for city vehicles two years ago, for which the city will begin seeing the pay-off.
With the leasing program, the city “has younger, low-maintenance vehicles that are under warranty” under the Enterprise Fleet Management System. “Then they tell the city when to turn in the vehicles so we can get the most equity” out of them, the mayor said.
She said the biggest impact is on the police department budget because they turn in so many vehicles a year.
Because of the leasing program, “We’ve consistently lowered our debt service payment substantially,” Nolan added.
Another cost-savings for the city will be the new LED Lighting project.
“We plan to close on the street lights in November,” said Izzo, adding that the LED lighting will remove a $200,000 expense for the city to National Grid.
But the savings from the lighting project, “won’t take place until the very end of 2022. The 2023 budget will reflect the savings of the LED lights,” she said.
According to documents supporting the proposed 2022 budget, total revenues for both inside and outside districts, are to be derived from a property tax levy of $15,360,206; $619,722 appropriated to the fund balance; and $29,727,307 from other revenue sources, including state aid and sales tax revenue.