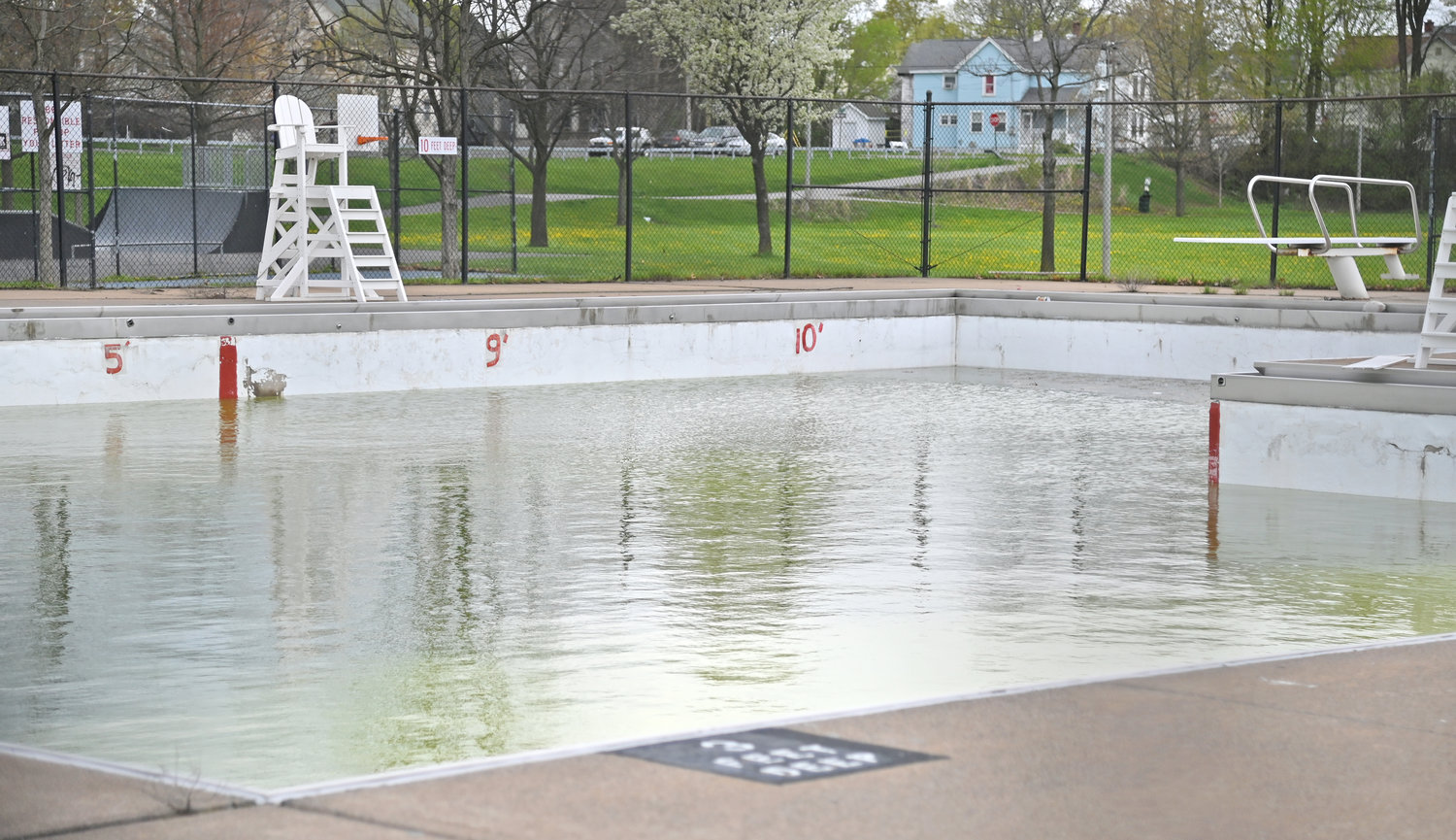 NOT YET READY TO DIVE INTO SUMMER — Tosti Pool at Pinti Field on Sixth Street is shown on Monday. City officials say they are keeping an eye on potential chlorine issues, but it is too soon to tell, what, if any, impact the issue may have. The city is also keeping an eye out on its lifeguarding crew. A popular certification program for local guards was unavailable this year, and officials are hoping that a full complement of lifeguards will still be available. The deadline for applications for summer jobs with the city is May 15.
(Sentinel photo by John Clifford) 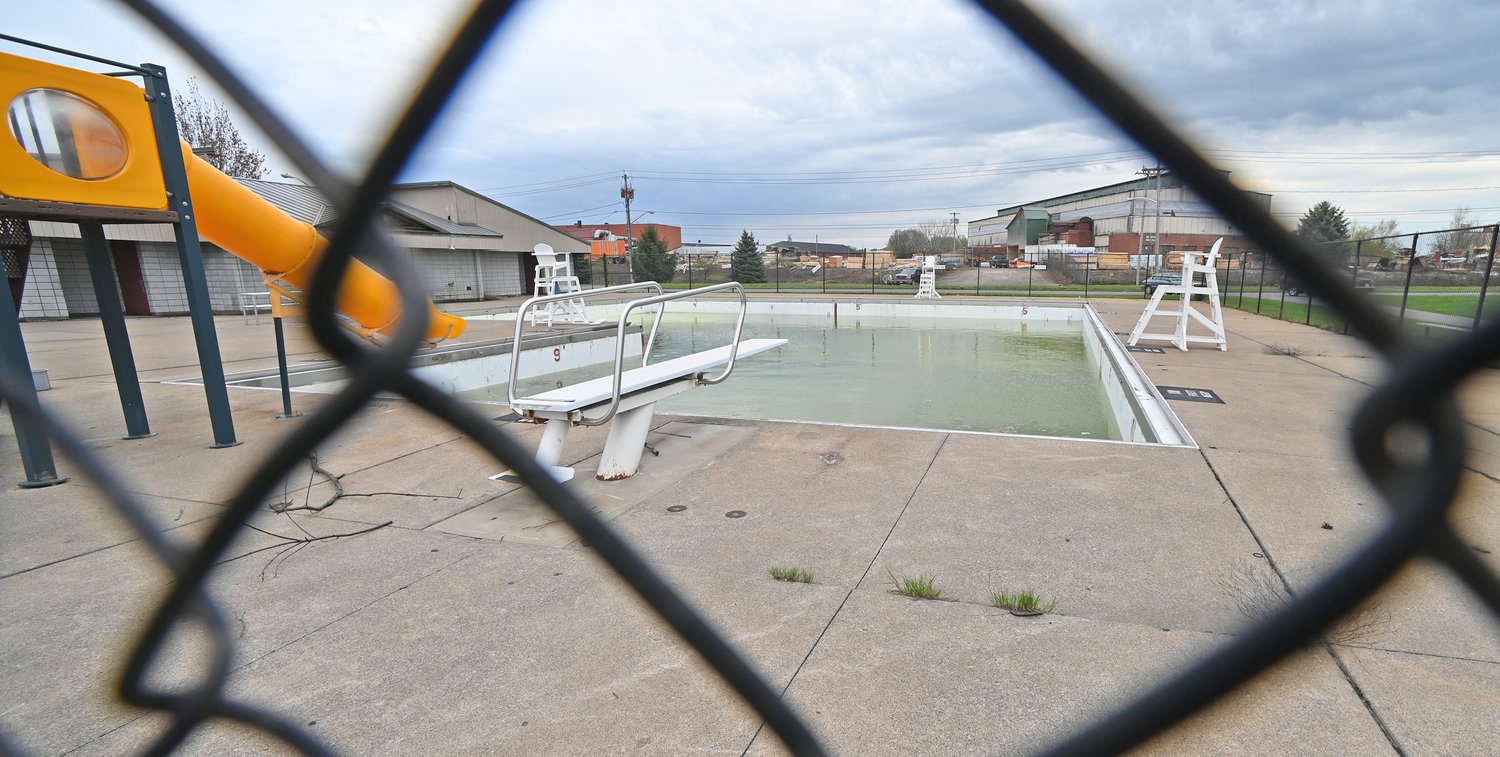 This might be the only view of Tosti Pool at Pinti Field this summer- through the chainlink fence.
(Sentinel photo by John Clifford)

As the warmer days of summer approach, pool owners may have to pay more for maintenance this year due to a shortage in chlorine tablets.

According to national reports, a fire at a chemical plant located in Louisiana back in August is attributed to the shortage. While some say it may be too early to tell locally if this will have a great impact on available supplies and prices, others have described it as the new consumer panic — comparing it to the likes of toilet paper consumption at the beginning of the pandemic.

Jim Rizio, manager of Ace Hardware at Black River Boulevard, said he received about a dozen calls from local patrons Monday morning concerning the chlorine supply for pools. He said the shortage is specifically of the 3-inch chlorine tablets used for skimmers.

The chlorine tablets “are for every-day sanitation, and there’s not a great substitute” for them out there, said Rizio, adding that the problem is more of a “supply-and-demand issue.”

However, Beth Petroski of Rome Pool & Spa at 1513 E. Dominick St., said homeowners can still regulate their pools with liquid chlorine instead of tablets, keeping in mind that the liquid form has a higher pH, and adjustments should be made as for the quantity added to pool water.

“We must have gotten at least 50 calls on this today,” said Petroski Monday when asked about the chlorine shortage. Petroski said Rome Pool & Spa is limiting the number of chlorine tablets to one bucket per customer. But granular or tablet chlorine can be substituted with liquid, she said.

Customers “shouldn’t panic,” because there is an alternative, Petroski advised, stating that the chlorine shortage should not have to become this year’s new toilet paper shortage dilemma.

But since reports of the chlorine shortage, Petroski said she has heard that businesses are increasing their prices on tablets and some stores, like Walmart, are already selling out.

An associate at the Rome Walmart on Rome-Taberg Road said the store only had a supply of individually packaged 3-inch chlorine tablets, as opposed to buckets of tablets.

City Parks & Recreation Director James Korpela said he was unaware if the shortage of chlorine would impact city pools because they aren’t scheduled to open until July. Therefore, it is not yet known if any shortage would impact the opening of pools, if the city will have difficulty obtaining sufficient supplies of chlorine, or if it will wind up costing more than what was budgeted for.

However, he said a shortage of lifeguards may be a concern this summer. Usually the city obtains a number of its lifeguards through a certification program offered through physical education classes at Rome Free Academy. But due to COVID-19, that program was not held this year, he said.

“We’ve been referring candidates to the YMCA (of the Greater Tri-Valley) or the American Red Cross,” said Korpela.

The deadline for applications is May 15, but if there’s a shortage of lifeguards, Korpela said the city may look to extend the deadline or accept applications after that date.