Legislation on solar arrays in city sent for Planning Board review

Legislation to amend the city Zoning Code relating to the establishment and construction of solar arrays within the city, will now move forward to the city Planning Board.

Legislation on solar arrays in city sent for Planning Board review 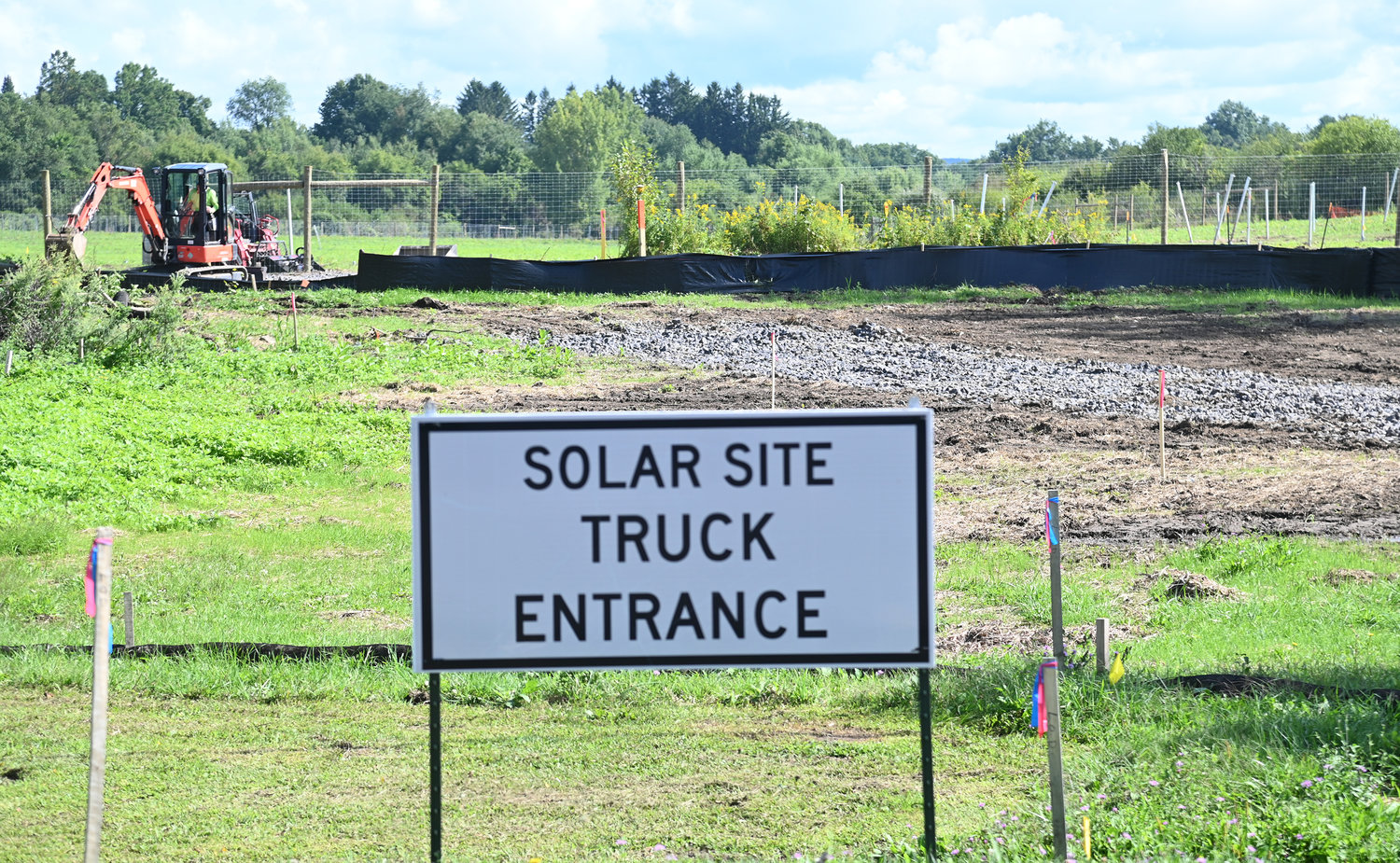 Site work, including clearing and leveling work, is performed at a solar panel field site off Route 233 in Stanwix Heights across from 6735 Route 233 earlier this month. The project had been approved before the city’s Common Council enacted a moratorium on solar array projects. Legislation to amend the city’s Code of Ordinances regarding solar arrays has been sent from the council to the city Planning Board for review.
(Sentinel photo by John Clifford)
Posted Saturday, October 1, 2022 8:50 am
Nicole A. Hawley
Staff writer
email / twitter

ROME — Legislation to amend Rome Code of Ordinances Chapter 80 — Zoning Code in order to protect the health, welfare and safety of citizens and businesses for the establishment and construction of solar arrays within the city, will now move forward to the city Planning Board for review and approval.

During Wednesday’s Common Council meeting held in Council Chambers of City Hall, councilors unanimously approved tabling Ordinance 9538 so that the legislation can go to the Planning Board. The legislation would give the council authority to amend the Zoning Code when necessary to further the public interest concerning any future solar projects.

Third Ward Councilor Kimberly Rogers, Fifth Ward Councilor Frank R. Anderson and Second Ward Councilor John B. Mortise have stressed that a zoning amendment is necessary to facilitate the establishment and construction of solar energy systems within the city or the issuance of any approvals or building permits for such projects.

According to the legislation, the amendment is to be adopted to advance and protect the public health, safety and welfare of the community by creating regulations for the installation and use of solar energy generating systems and equipment, with several objectives.

Rogers had previously said the ordinance would automatically be tabled during Wednesday’s meeting so that the city Planning Board would have time to review the proposed legislation. Upon the board’s approval, a public hearing on the legislation will be scheduled.

“This was a long time in coming, and a long process,” said Rogers at Wednesday’s meeting. “We’ve gone through a couple extensions for moratoriums and we’re finally at a point where there’s legislation in front of us. We got input from community members, a number of staff and councilors, and anyone who has listened.”

Councilors Anderson and Mortise thanked all those involved in helping to draft the legislation.

“We took a lot of public opinion into account and our members of the council were instrumental in giving us ideas revising the city’s solar array legislation,” said Anderson.

Mortise added, “Solar panels are popping up on every corner and open field, and in my opinion, there was no restriction. It’s been an on-going battle, so I thank everyone who had a piece of the pie in this legislation, and now we’re finally on the table with it.”

Other legislation unanimously approved by the council:

• Resolution 105 authorizing the mayor to submit a 2022 Round 6 Restore NY Communities Initiative Municipal Grant application in an amended amount not to exceed $2 million to facilitate redevelopment of an historic building (with Gen. William Gansevoort mural) located at 233 W. Dominick St. Deputy Director of Community and Economic Development Matthew Andrews recommended the legislation be amended from the original amount of $1.8 million. “This is a good opportunity for us to save a building that’s part of history for the city of Rome,” Rogers said.

• Resolution 106 authorizing to amend the Harborway on the Erie Canal capital account (HDR) previously adopted by way of Resolution 79 of 2021 to include revised funding amounts.

• Resolution 107 authorizing to amend the Liberty-George demolition project capital account (HEZ) previously adopted by way of Resolutions 87 of 2021, to include revised funding amounts.

• Resolution 108 authorizing to amend the use and occupancy permit with the state Department of Transportation related to the Mohawk River Trail Phase II project, previously adopted by way of Resolution 35 in 2021, to include a trailhead and parking area.

• Resolution 109: Resolution determining that action to undertake a certain project will not have a significant effect on the environment which includes the purchase of a crane truck in the amount not to exceed $30,000.

• Ordinance 9534 authorized the placement of no-parking signs on the west side of Schuyler Street.

• Ordinance 9535 authorizing the mayor to execute lease agreements with Enterprise Fleet Management for the leasing of two Ford Explorers, one for the water filtration plant and the other for the Engineering Department. Anderson said he wanted a data analysis for working with Fleet Management during the 2023 budget process.

• Ordinance 9536 authorizing the mayor to execute lease agreements with Enterprise Fleet Management for the leasing of four Dodge Durangos for the police department. City officials explained that Ford would not honor a previous agreement to provide four vehicles to the police department in 2023 due to supply and demand issues.

• Ordinance 9537 authorizing the mayor to execute lease agreements with Enterprise Fleet Management for the leasing of one Chevrolet Tahoe suburban for the fire department.

• Ordinance 9539 authorizing the issuance of an amount not to exceed $195,000 in city bonds to finance the cost to purchase machinery and apparatus for construction and maintenance. The legislation was necessary to adjust for supply issues and a rise in costs.