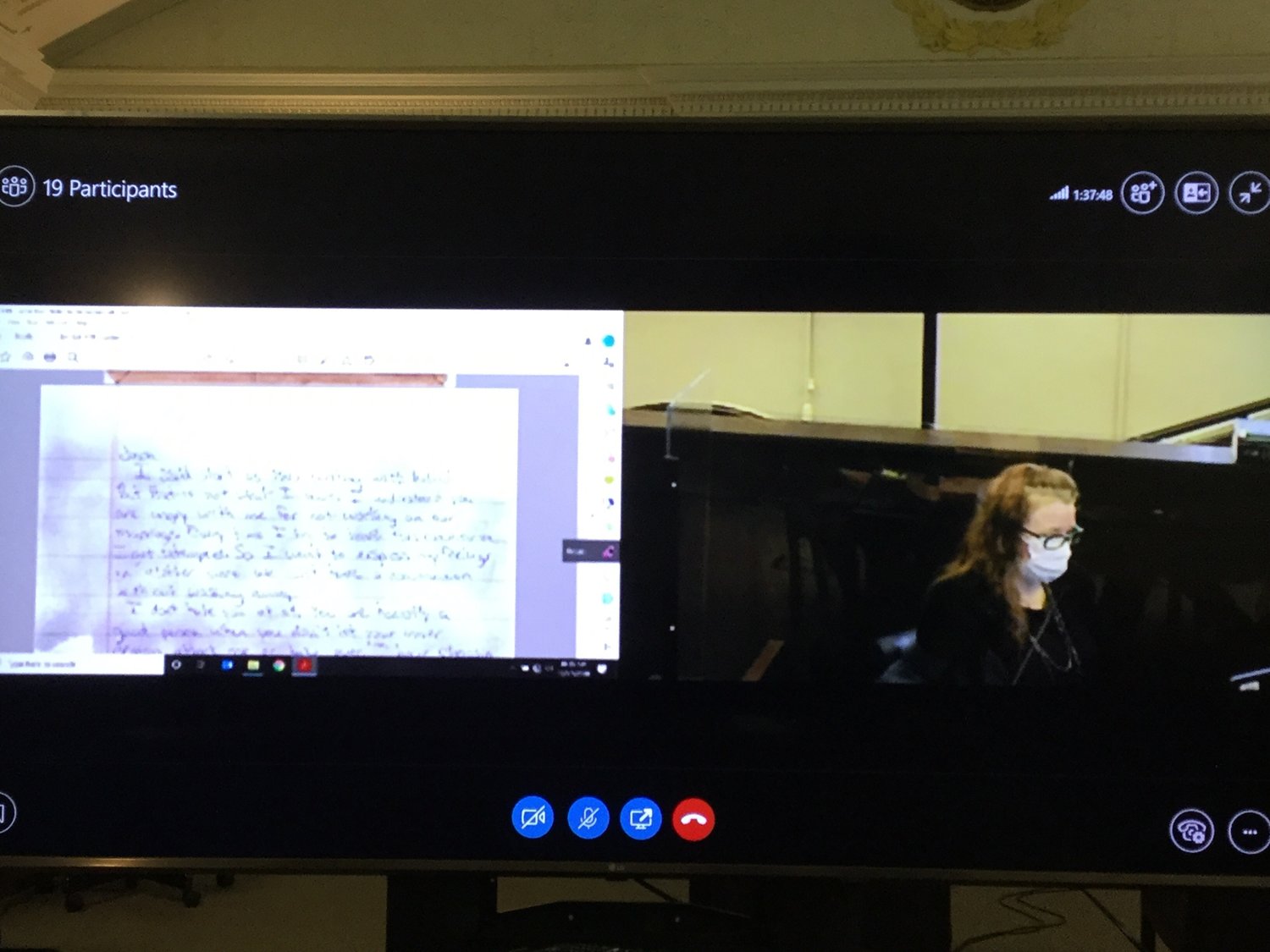 READING THE LETTER — Tiffany Thompson, sister to Kerrilee D’Avolio, reads a two-page letter that Kerrilee wrote to her husband expressing her desire to end their marriage. The letter is undated, but testimony on Tuesday indicated that the letter may have been written on the day Kerrilee was shot.
(Sentinel photo by Sean I. Mills) 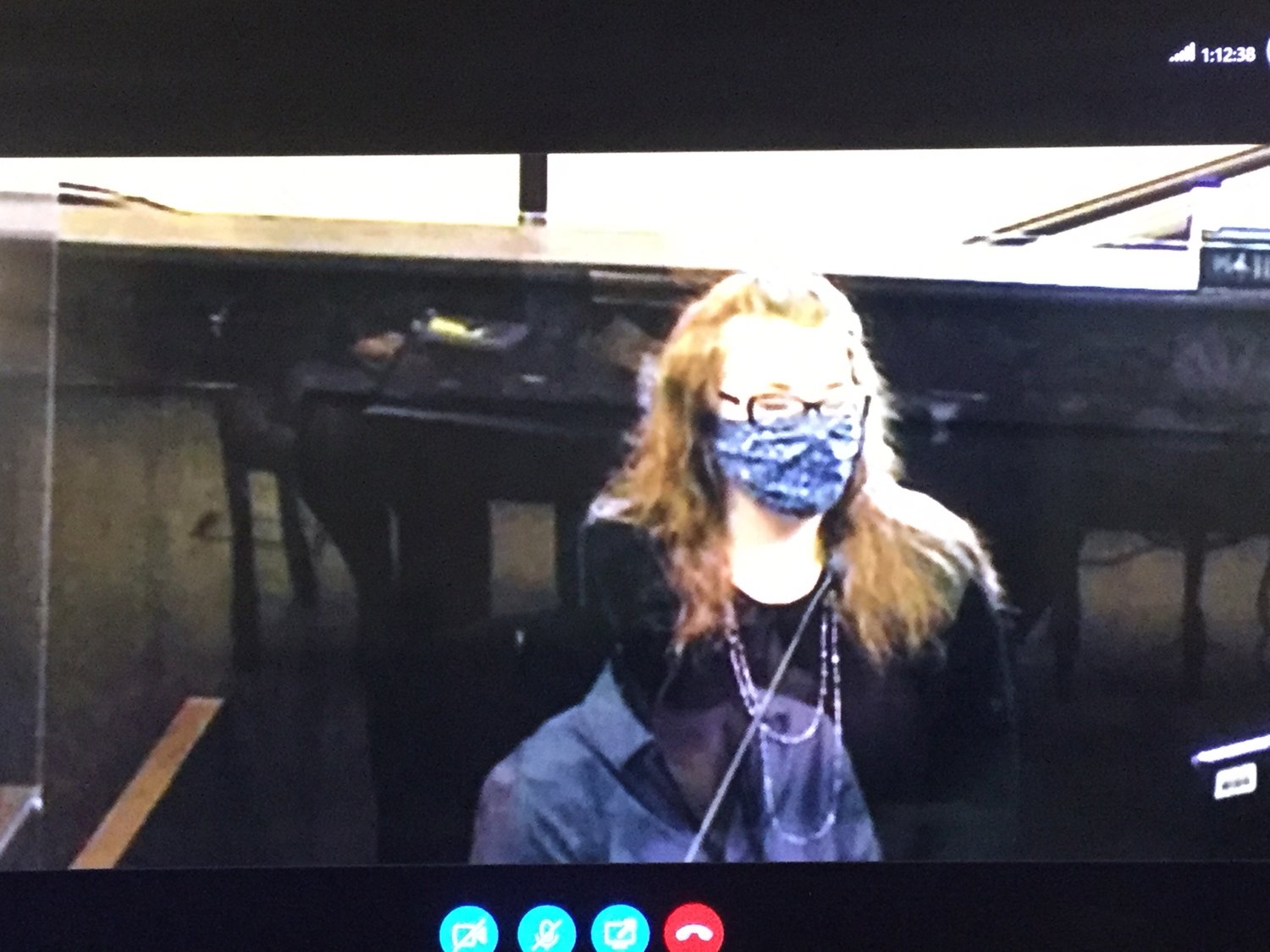 “Yeah, she’s getting a bullet tonight. That she is.”

Words supposedly uttered by accused killer Jason P. D’Avolio several days before authorities said he shot and killed his wife, Kerrilee. The words were captured on an audio recording that D’Avolio made himself on his own cell phone on July 23, 2019, during a moment between himself, his wife and their three daughters.

Also on the recording, D’Avolio can be heard saying, “Still shooting your ass (expletive) dead tonight” under his breath.

D’Avolio, 48, of Rome, is accused of shooting Kerrilee in the back of the head on the night of July 28, 2019, at their Belmont Street home. He is also accused of then throwing her body in a dumpster. He is on trial this week on one count each of second-degree murder and concealment of a human corpse.

According to prior testimony in the trial, D’Avolio made several audio recordings of arguments and conversations he had with his wife in the weeks leading up to the shooting, as part of his process to document their impending divorce. Snippets from two of those recordings were played for the jury Tuesday morning.

On July 23, D’Avolio recorded a moment where their three daughters wanted to go bicycling and eventually settled on going for a walk. Kerrilee is in the recording assisting with their daughters before she eventually left on her own, leaving D’Avolio to walk alone with the three girls.

While conversing with Kerrilee in the video, D’Avolio can be heard muttering under his breath, “Still shooting your ass (expletive) dead tonight” before questioning Kerrilee about whether or not she was wearing underwear. D’Avolio can twice be heard telling his daughters that Kerrilee was going out to “meet somebody.”

After Kerrilee leaves and D’Avolio takes his daughters on a walk, he can be heard on the recording saying to himself, “Yeah, she’s getting a bullet tonight. That she is.”

A second recording was also played for the jury, this one of an argument between Jason and Kerrilee on July 25, 2019. In the second recording, the pair are heard arguing about their crumbling marriage and a possible court battle over custody of the girls. Towards the end of the argument, Kerrilee can be heard leaving the argument, while D’Avolio continues. Kerrilee can be heard complaining that D’Avolio still wants to fight.

“I just want to hate your guts and (expletive) bury you in the backyard,” D’Avolio tells his wife in the recording.

Both recordings were played for the jury during the testimony of Kerrilee’s sister, Tiffany Thompson. She testified that she recognized both voices and could identity them as Jason and Kerrilee.

Thompson told the jury that the last time she was Kerrilee alive was on the night of July 27, 2019, when the two of them went out for food together.

“She was happy that she was moving on,” Thompson said of her sister. She said Kerrilee was excited about going apartment hunting and about starting a new job early.

“She was excited, happy, bubbly,” Thompson told the jury.

Thompson said Kerrilee was overall happy that she had lost upwards of 100 pounds due to an extensive exercise routine and strict diet. She said Kerrilee had joined a running club and was excited about taking up boxing. Thompson told the jury she never saw any signs of physical domestic violence between Jason and Kerrilee. She also said Kerrilee suffered from postpartum depression after the births of her three daughters.

Thompson was also able to identity Kerrilee’s handwriting on a two-page letter that police investigators said they found on Jason’s work desk in the couple’s bedroom. Earlier in the trial, police said they found the letter on the desk while searching the home following the shooting. The letter was undated.

Thompson read the letter for the jury. In the letter, Kerrilee asked her husband, Jason, to let her go. She told him that writing a letter was easier than having a conversation because he would often walk away from a conversation. She said she understood his anger that she did not want to work on their marriage.

“I don’t want to hate you at all. You are honestly a good person when you don’t let your inner demon attack me or take over,” Kerrilee wrote in the letter. “I am truly happy being alone. Never thought I’d say that. I am not sorry that I finally want to work on me.”

Kerrilee wrote in the letter that she believed it was a mistake to jump into a relationship with Jason so quickly after her abusive first marriage. She told Jason that she had love for him, but was “never in love” with him.

“That was very selfish of me, to take advantage of you,” Kerrilee wrote in the letter. “You can make me happy by letting me go.”

Kerrilee wrote in the letter that she and Jason could remain friends so that they could take care of their girls together. She wrote that she did not want to stay in a relationship where she would be depressed, and where the girls would see that.

“I want to enjoy life,” Kerrilee wrote in the letter. “I see a different future for me.”

Though the letter itself was undated, Kerrilee’s personal trainer took the stand on Tuesday and told the jury that he heard Kerrilee talking about writing a Jason a letter the day she was shot.

The trainer, Travvase Shahid, testified that he started as Kerrilee’s trainer in 2018, but their relationship eventually turned personal and romantic overtime. Shahid told the jury that he and Kerrilee were talking about being together in the future, and they were texting nearly all day, every day, by the end of July 2019.

Shahid told the jury that he and Kerrilee spent several hours together on the night of July 27 and the early morning of July 28, after Kerrilee had gone out with her sister. Shahid testified that they talked for a long time and Kerrilee was “emotional” around him, telling him that she was crying “in a good way.”

“I had my mind made up that I would be with her in the future,” Shahid told the jury. He noted that the two of them had never had sex.

Later in the morning on July 28, Shahid testified that Kerrilee texted him with the idea to write Jason a letter to say “her last piece,” he told the jury. Shahid said he warned Kerrilee about being careful with another person’s feelings. Shahid told the jury that they continued texting throughout the day before saying goodnight to one another later on July 28. He said that was the last he ever heard from her.

Shahid told the jury that Kerrilee seemed “good” and “extremely positive” in July 2019 and showed no signs of depression.