Inflation puts squeeze on food pantries locally, across the country

A dollar doesn’t go as far as it did at the beginning of this year and it’s only getting worse as food pantries work to ensure the hardest hit in the community don’t go hungry.

Inflation puts squeeze on food pantries locally, across the country 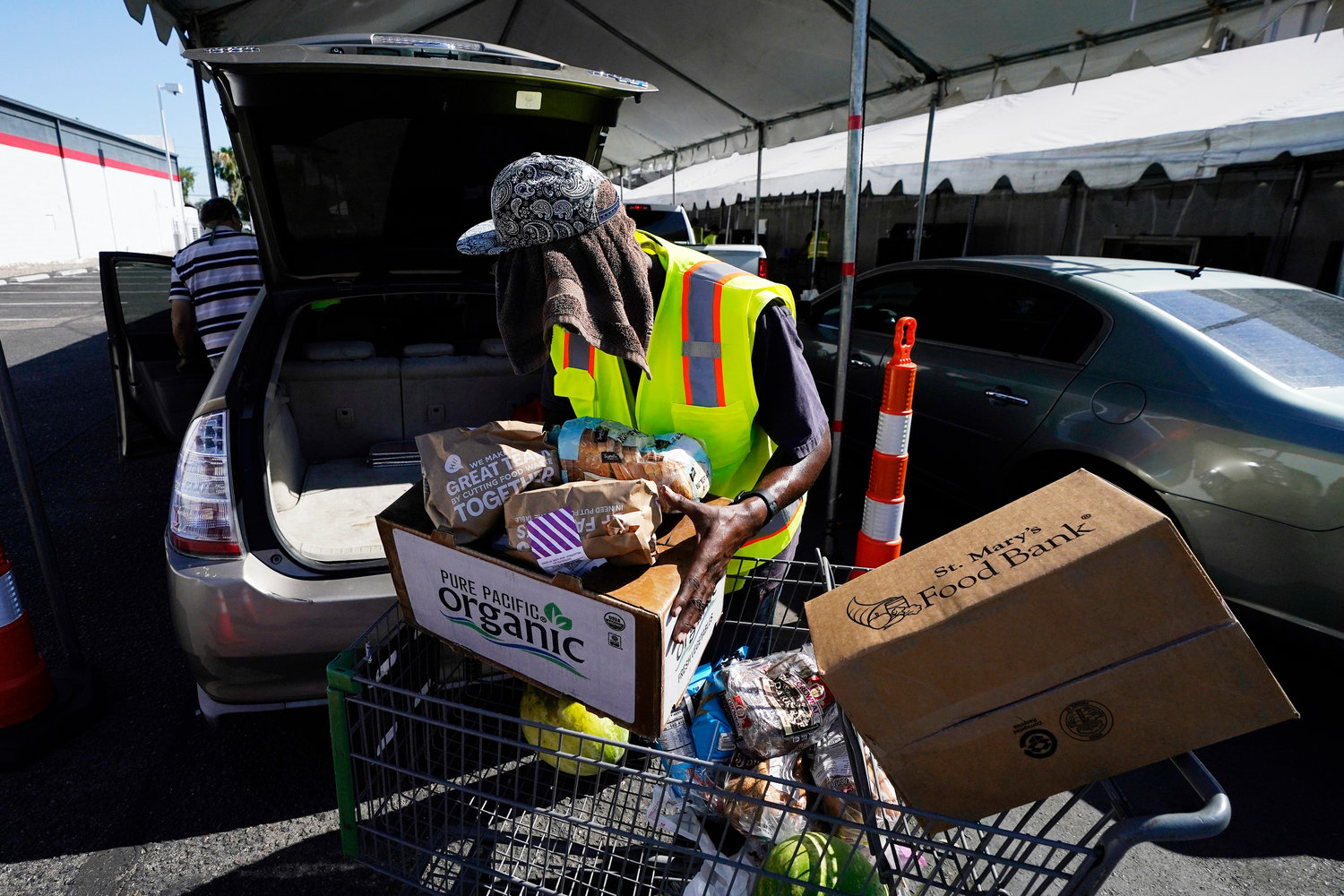 Food banks and pantries are struggling to meet the growing need even as federal programs provide less food to distribute, grocery store donations wane and cash gifts don't go nearly as far. In Oneida, Karing Kitchen Coordinator Melissa King said other food pantries in the area are all dealing with the same issue. But the issue isn't just a local one. In this Associated Press photo, a volunteer fills up a vehicle with food boxes at the St. Mary's Food Bank Wednesday, June 29, 2022, in Phoenix. There, more than 900 families line up at the distribution center every weekday for an emergency government food box.
(AP Photo/Ross D. Franklin)
Posted Thursday, July 21, 2022 10:30 am
Charles Pritchard
Staff writer
email / twitter

A dollar doesn’t go as far as it did at the beginning of this year and it’s only getting worse as food pantries work to ensure the hardest hit in the community don’t go hungry.

Average food prices climbed an annualized rate of 10.4% in June, the Bureau of Labor Statistics reported on July 13, 2022. The gains were driven primarily by the cost of groceries, which jumped the most since the 1970s, by 12.2%. Overall inflation was up 9.1% from a year earlier.

Karing Kitchen Coordinator Melissa King said she’s been in contact with other food pantries in the area and they’ve all seen an increase, whether it’s the cost of groceries or the amount of people coming through their door.

“We’re all seeing an increase and part of that are families trying to make that decision about what they can feed their family with,” she said. “The costs are just so much more. A can of SpaghettiOs used to be a dollar. Now it’s $1.79. And that’s a huge difference for a family trying to figure out how they’re going to make their SNAP or their budget work.”

While all Americans have seen their grocery bills swell, many may not fully appreciate the enormous burden that rising food costs pose for low-income households. The reason is simple: Poor families spend a much larger share of their income on food than the median household.

In 2020, the average middle-income American family spent roughly 12% of its earnings on food. In sharp contrast, poor households spent 27% on food that year. It doesn’t help that while COVID-19 has become a less prevalent topic in today’s world, some jobs no longer exist or are only half the hours they used to be.

“On top of this, rent has gone up and so has cost of living,” King added. “For example, our seniors have seen their Medicare premiums go up, higher than they ever have before. They may have gotten an increase in their benefits, but they’re saying they have to spend that increase on their rent and the premiums.”

There’s been a dramatic change in spending patterns among American households during the 20th century.

In the 1900s, the bare necessities of life, including food, were enormously expensive compared with today, leaving little room for spending on other goods or services for most Americans, according to a 2006 study by the Department of Labor. On average, American families spent over 40% of their income on food in 1901, 23% on housing and 14% on clothing.

But the relative cost of food and clothing decreased steadily over the next 100 years. By 2002, the two categories represented only 17.3% of a middle-class family’s expenditures and by 2020, the figure had fallen to 14.2%. The sharp drop in the cost of food and clothing led to a massive reshuffling of family budgets over roughly the past century. As people reduced their spending on these items, they spent more on housing, transportation and insurance.

As the country became wealthier, discretionary spending increased, too. Most Americans had more room in their budgets for eating out, televisions and entertainment.

This revolution in household spending largely excluded poor Americans, who continue to devote most of their income to feeding their families and other necessities like shelter. As a result, they are particularly vulnerable to spikes in food costs.

When asked how the Karing Kitchen has been handling the increased cost of food and people coming through their door, King said they are managing to the best of their abilities.

“I always try to keep the cost of our meals less than a dollar, but it’s been hard to find that lately,” she said. This is especially important among families with children.

“This first week of July, Karing Kitchen partnered with the Oneida School District to make sure children aren’t going without meals this summer,” King said. “We’re trying to make sure families have meals every day so they’re not struggling as much, because it’s hard when you don’t have that lunch or breakfast program. And children are more active during the summer, so they’re either eating bigger meals or snacking through the days.”

“Families are struggling across the board, trying to figure out what to do,” King continued.

An estimated 38 million Americans are food insecure, meaning that they have insufficient means to obtain sufficient food. The concern is, with food inflation rising at the rate it is, more families will face the prospect of being unsure where their next meal is coming from.

Those looking for help or those looking to help families in need can find their local food pantry by visiting www.foodbankcny.org

Those looking to help Karing Kitchen can visit www.karingkitchen.org

King said donations through a PayPal account like Karing Kitchen’s gives the food pantry ready cash they can use to purchase items wherever they can.