Folks over at the Fair Trade Shop located at Stone Presbyterian Church, 8 S. Park Row, are gearing up for the holidays and the village’s annual Shoppers’ Stroll Friday, Nov. 25. 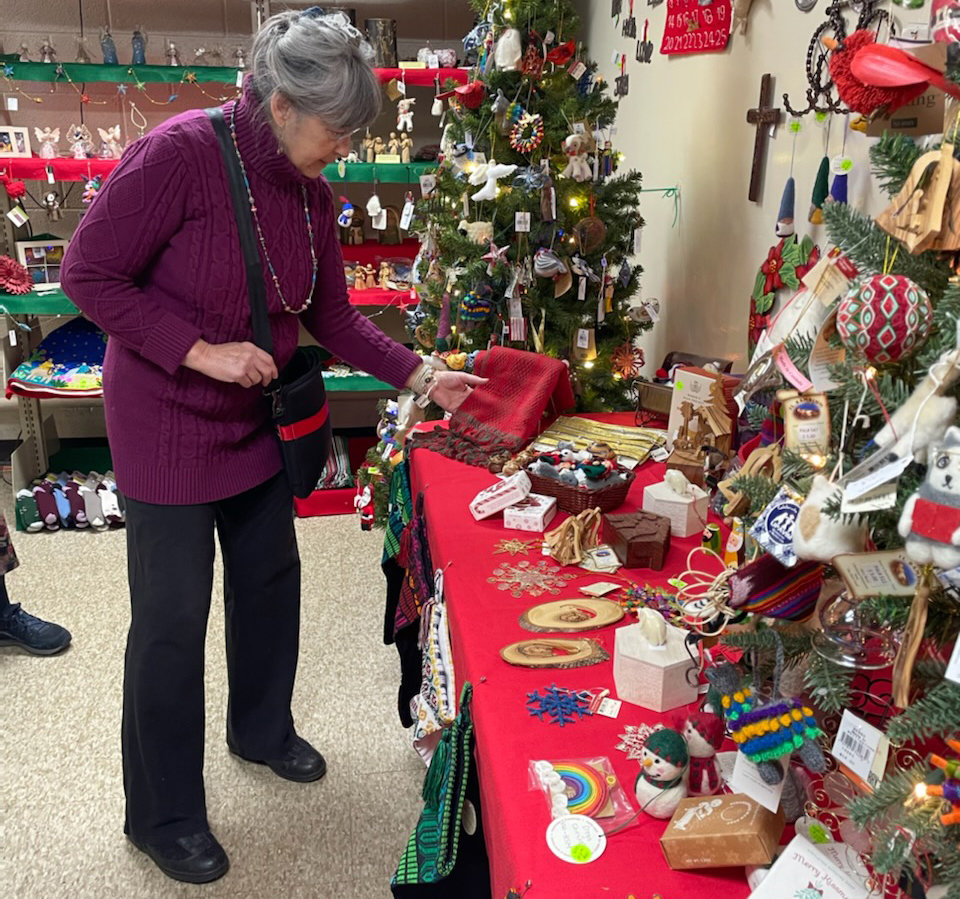 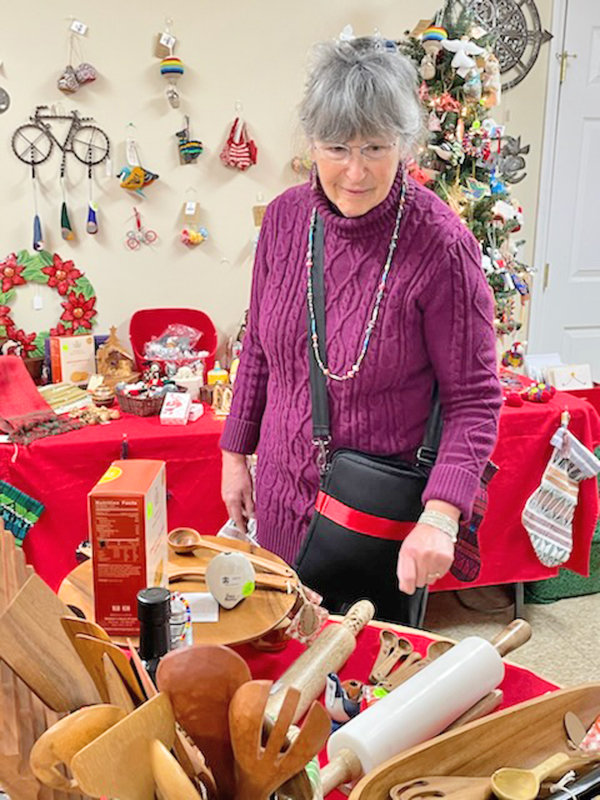 Lauralyn Kolb, director of the Fair Trade Shop at Stone Presbyterian Church in Clinton, shows off some of the decorative rolling pins and wooden cooking utensils made from olive wood that are among the items from 38 different countries available at the store.
(Sentinel photo by Nicole Hawley)
Previous Next
Posted Thursday, November 17, 2022 5:40 pm
Nicole A. Hawley, Gabby Moore and Bailee Serianni, for Sentinel Media Co.
CLINTON — Folks over at the Fair Trade Shop located at Stone Presbyterian Church, 8 S. Park Row, are gearing up for the holidays and the village’s annual Shoppers’ Stroll Friday, Nov. 25, stocking the store with tree ornaments and other specialty gifts representing 38 countries from around the world.
The Fair Trade Shop offers an array of handcrafted products from artisans around the world, including apparel, women’s and men’s jewelry, baskets, ceramics, cards, foodstuffs, children’s toys, and other unique gifts.
Other speciality goods include children’s play hats featuring cats and dragons, wooden chess sets and puzzles and pet beds and toys. Several items are also manufactured using recycled materials, including book ends made from recycled bicycle chains. And some Vietnamese pottery may feature patterns that are more than 1,000 years old.
One of several neighboring shops to participate in the Shoppers’ Stroll, Clinton will kickoff the holiday season and offer an escape from the hustle and bustle of the malls while offering area residents the opportunity to support local and shop small businesses from 10 a.m. to 8 p.m. Nov. 25.
Once shoppers walk into the Fair Trade Shop, they can view the list of countries whose handcrafts and goods are represented — from Afghanistan, Bangladesh and Vietnam to Cambodia, Guatemala and Pakistan.
“Fair trade companies prescribe to a series of principles, including transparency and building relationships between the artisans and vendors, with a commitment to pay fair wages,” explained Fair Trade Shop Director Lauralyn Kolb. “Artisans are also involved n the decision making.
There is pre-payment by companies so that they can give 50% to artisans so that they can have money to live, and then they get the other 50% when the products are complete.”
Kolb further explained there is no child exploitation in the making of fair trade goods and equal opportunity is given to women workers, while artisans are able to celebrate their cultural identity through their craft.
Among the array of products featured are olive oils from a company where Israeli and Pakistani natives are working together — an effort to build peaceful relations between the two conflicting countries.
“Even if they’re not working together directly, they are cooperating with each other in order to maintain their livelihood,” Kolb said. “They’re learning to depend on each other.”
There are also products made by stone carvers in Pakistan who represent “all different faiths” with no discrimination, said the shop director.
Some companies that deal in fair trade goods will only hire female workers. Unidas Para Vivir Mejor, or United for a Better Life, is a co-opted group that has a Montessori school for girls and boys. in Guatemala, Kolb explained. Members of UPAVIM (all women) make and sell crafts in order to finance all their projects which include the school, a library, pharmacy, etc.
The history of selling fair trade at Stone Presbyterian goes back more than 20 years when the church partnered with the Presbyterian Church USA to serve fair trade coffee during its social hours following church services on Sunday. From that, Kolb said, came the idea of offering the coffee the church served for sale to parishioners.
Then one day during a visit to Niagara on the Lake in Ontario, Canada, Kolb said she stumbled upon a shop called Ten Thousand Villages. Like the Fair Trade Shop in Clinton today, it offered speciality goods and gifts from developing nations around the world. She purchased jam made by farmers in Africa and brought it back to her church in Clinton.
“I came back here and some people thought it would be a great idea — some people thought it was a terrible idea — to offer fair trade items for purchase through the church,” said Kolb.
She recalled while visiting another destination, she discovered a store that sold soup mixes made by the Women’s Bean Project, a non-profit social enterprise that employees women to help get them off the streets. The organization also gives employment training and education to its female workers, said Kolb.
“Then someone suggested we take the coffee, teas and jam over to the Village Green — we already had a table” for the farmers market “with pies that we sold to help support our Christmas families,” she said. “Then in time, we bought more goods to offer with the profits.”
The former Boy Scout room in the basement of Stone Presbyterian would eventually become home to the Fair Trade Shop in 2014.
In addition to buying more products to fill the tables and shelves of the shop to offer variety to area shoppers, the Fair Trade Shop has donated monies to local, national and international organizations and charities, including the Refugee Center of Utica, now known as The Center. Profits also go to help support local food pantries.
“Last year we gave at least $3,000 total to the Center, and at least $1,000 to Presbyterian Disaster Systems, which is usually earmarked for Haiti, but if there’s a bad hurricane here,” it can aid U.S. victims of disasters as well, Kolb said. “We gave money to Bangladesh some years ago,” which experiences several cyclonic storms and is known as a disaster-prone nation.
Regular hours at the Fair Trade Shop are 10 a.m. to 4 p.m. every Thursday, second Saturdays of the month, plus every Saturday between Thanksgiving and Christmas.
This article was updated from its original version on Nov. 22, 2022.