The star behind the scenes at Rome's Capitol Theatre is an original Möller theater pipe organ — installed at the Capitol in 1928 ... 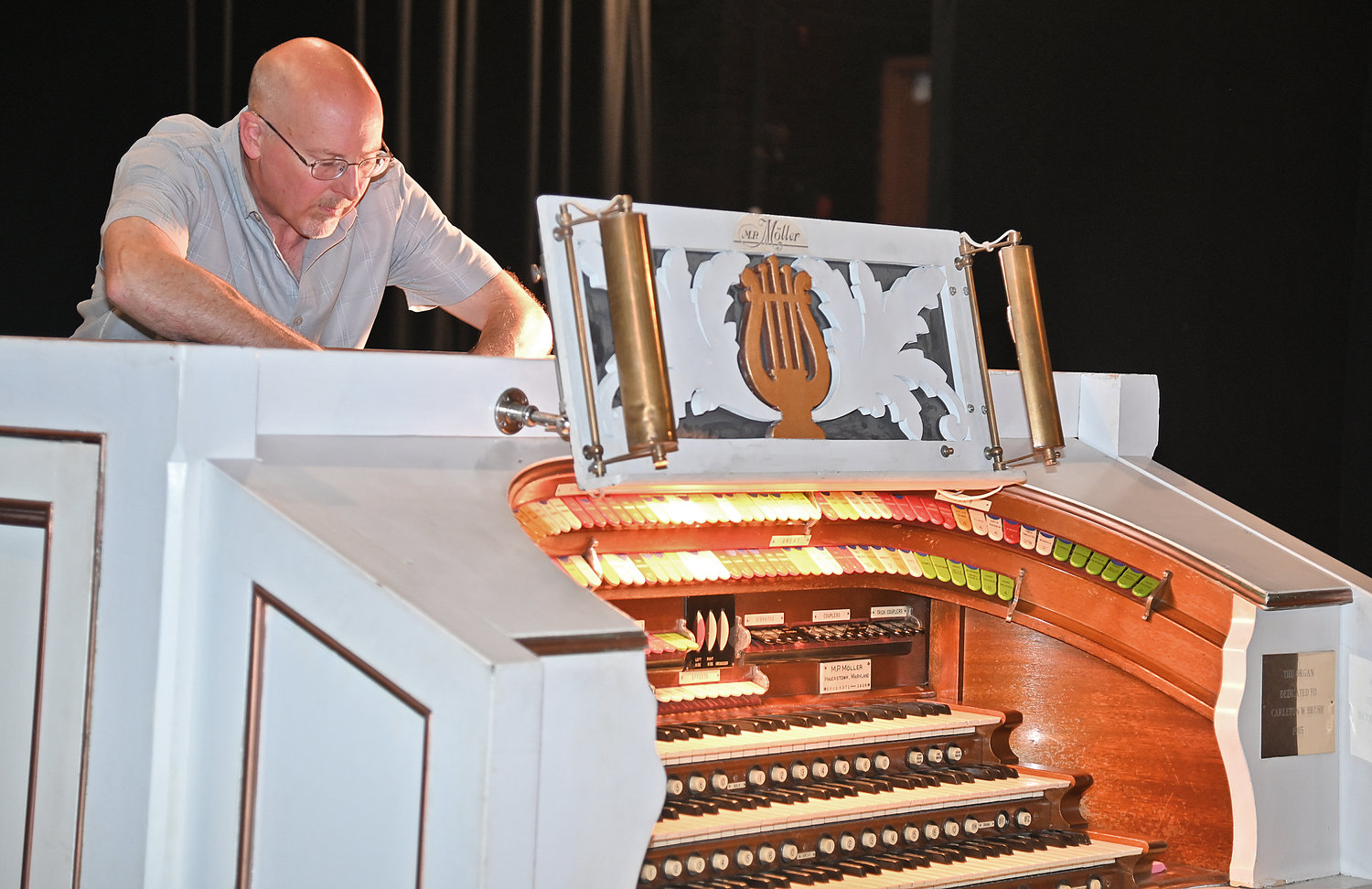 David Peckham, of Horseheads, works to restore the Moller Theater organ at the Capitol Theatre on Tuesday afternoon. The organ was originally installed at the Capitol, 222 W. Dominick St., Rome, by the Moller Company in 1928. There were only five of this type of organ ever made and this is the only un-altered Moller Theatre organ left, said Peckham.
(Sentinel photo by John Clifford) 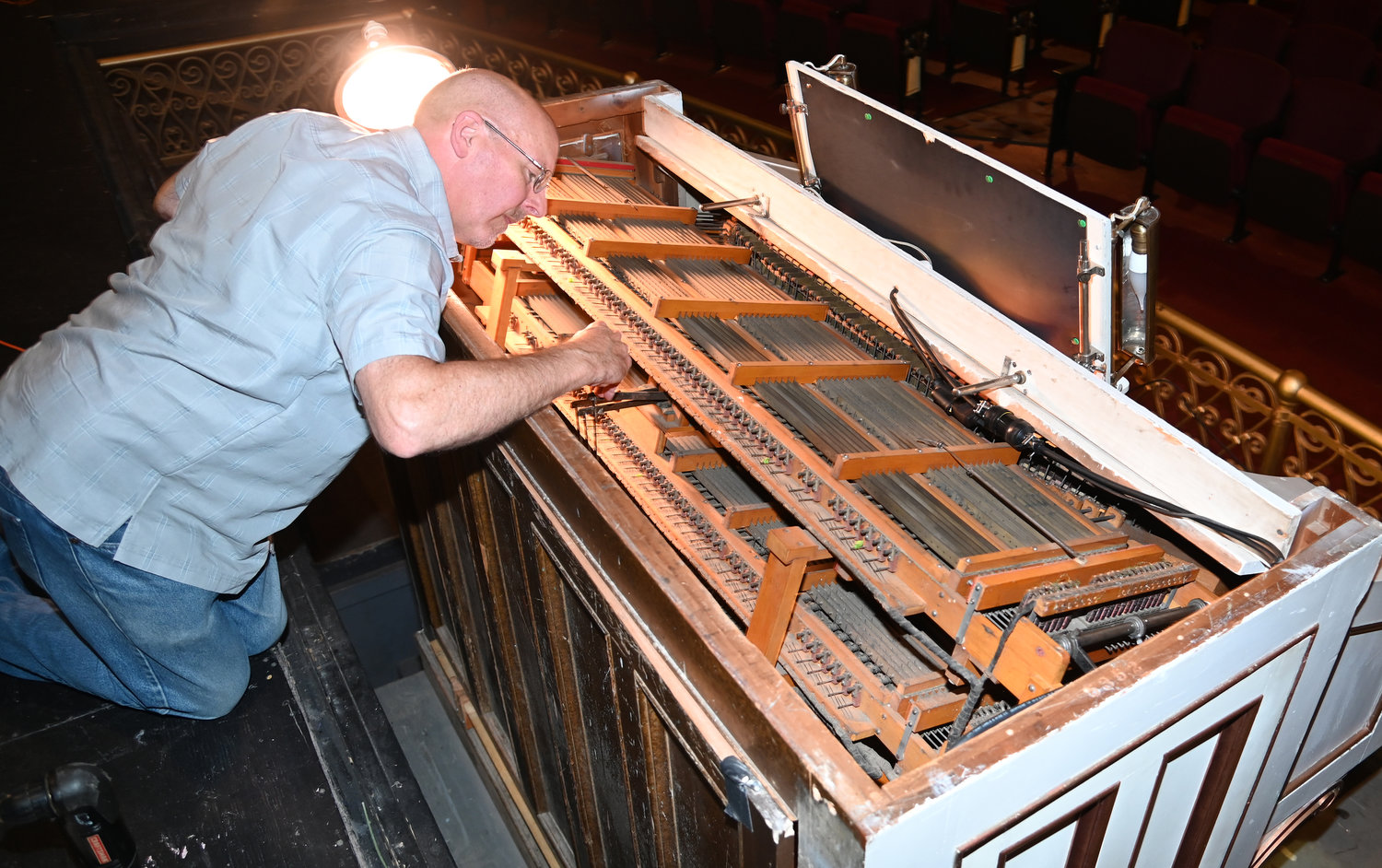 David Peckham, of Horseheads, takes great pains on Tuesday in his efforts to make the historic 1928 Moller Theater organ at the Capitol Theatre sound like it did when it was new.
(Sentinel photo by John Clifford)
Previous Next
Posted Thursday, August 11, 2022 7:40 am
More information

Tickets and more information about Capitolfest can be found at www.romecapitol.com, or by telephoning the theater at 315-337-6277.

If you’ve ever attended Capitolfest, the annual Capitol Theatre film festival featuring films from the first 50 years after the invention of cinema, you are probably familiar with one or more of the early stars of the Silver Screen.

But there is another, less well known, star behind the scenes at the Capitol — an original Möller theater pipe organ — installed at the Capitol in 1928 — and one of only four such Moller organs in their original theater installations in the U.S.

It’s also the only existing Möller theater organ in the country that has not been digitized.

Maintaining that valuable piece of history is David Peckham, who lives, eats, and breathes pipe organs. He’s been on tour around the world and when he’s not performing, he’s restoring and repairing pipe organs as part of the family business in Horseheads.

For the past several weeks, Peckham has been hard at work at the Capitol Theatre, working to get its venerable Möller organ in top form for this week’s Capitolfest 19 — the continuation of a two-year project to restore the historic instrument.

A pipe organ is a complicated piece of machinery and a theater organ is a more complicated version of a pipe organ, Peckham said. It utilizies an electropneumatic relay system, so that the console in the orchestra pit can “speak” to the approx. 800 pipes (ranging in size from an inch to eight feet) located in the two chambers that flank the theater auditorium.

Another feature that traditional classical organs don’t have is the “toy counter,” a collection of percussion instruments and effects that are also operated from the organ console. Here one can find such non-traditional organ devices as a Ford automobile horn, a fire engine siren, a train whistle, a door bell which also doubles as a ringing telephone, various types of drums, castanets, a thunder sheet, a glockenspiel, a xylophone, and sleigh bells — all designed to help the accompanist bring sound to silent films.

Each of Peckham’s visits to the Capitol bring new challenges and improvements to the 94-year-old organ. This year, he is working on the intricate mechanics that control the keyboard action.

The Möller organ has three keyboards. Each keyboard needs to be adjusted to the same overall tension.

“To get the touch as consistent as possible, I have these steel weights in quarter ounce increments,” Peckham said. “How it feels and how I see the key bounce gives me a pretty good idea of how consistent it’s going to be. It should be consistent, key to key to key tension wise. Regulating that brings it back to the way it was when it was new.”

“There were differences in tension among the three keyboards as well,” he added. “For me, that’s always an issue when I’m playing fast passage work. If it’s slow stuff in a sleepy ballad or some colossal fight scene, you’re not really thinking about the touch of the keys. But on more delicate work, it really does make a difference.”

Next year Peckham will find ways to improve the features on the organ. “Hopefully in another year we’ll get to the pedalboard, because that’s in the same condition.”

For many years the Capitol Theatre Möller theater organ was a functioning but clearly tired instrument, of historic interest but not musically impressive. Recently, things have changed.

As John Paul, Capitol house theater organist for the past 17 years, puts it, “with this ongoing professional restoration the organ is now close to its original brilliant sound of 1928.”

Thanks in large part to Peckham’s efforts and restored film prints from archives such as the Library of Congress, Museum of Modern Art, George Eastman Museum, and the UCLA Film & Television Archive, audience members seeing and hearing a silent movie at the Capitol can discover what it was like to experience these movies when they were new.

“There are film festivals of one sort or another all over the world, but we’re especially proud of the fact that our theater in this small city in Upstate New York is as well-equipped to host this particular type of film festival as any other theater in the world having, as we do, a 1928 theater at our disposal, 35mm variable speed carbon arc projection, and an original installation theater organ that was specifically designed to provide accompaniment for silent movies,” said Capitol Theatre Executive Director Art Pierce.

“There are very few theaters in America that can boast this combination of features, and not another in New York State,” Pierce added.