The Alexander Hamilton Institute for the Study of Western Civilization resides in a venerable mansion at 21 W. Park Row. 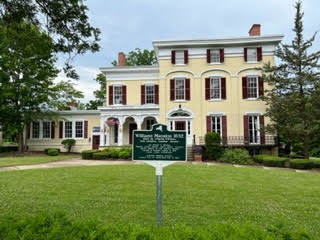 An historical sign relays the history of the home of the Alexander Hamilton Institute in Clinton.
(Photo submitted)
Posted Wednesday, July 20, 2022 12:50 pm

CLINTON — The Alexander Hamilton Institute for the Study of Western Civilization (AHI) resides in a venerable mansion at 21 W. Park Row. It was built in the Federal style of architecture and completed in 1832.

The building has served as a private residence, housing lawyers, educators, and financiers, during most of the 19th century and the first half of the 20th century. It turned into a seat of high-end dining for most of the post-World War II era before its transformation by AHI into an edifice of scholarly excellence in 2007.

Dick Williams, for 40 years the driving force of the Clinton Historical Society, recounted bits and pieces of the building’s past to AHI charter fellow James Bradfield and his wife, Alice. They and Robert Hamill, an AHI board member investigated, gathered important information, and set to work to bring an encapsulated of this buildings’ history with a display of a historical marker.

Hamill commissioned Sewah Studios of Marietta, Ohio, a makers of historical signage, to encapsulate the history for the viewing public. On June 6, a delay of two years because of the COVID pandemic, John Nester Contractors brought this project to fruition in front of the hedge row and parallel to the main door of AHI.

Yale graduate Othniel Williams (1787-1832), a practicing lawyer and Trustee of Hamilton College, constructed the building, which took him several years to complete. His son, Othniel Samuel Williams (1813-1880), lawyer, judge, and entrepreneur, was a Hamilton College alumnus and treasurer, in the latter capacity for 30 years. In 1871, the College acknowledged his service and largesse to Hamilton College by awarding him an honorary degree. He along with Samuel Eells and several others established in 1832 the Alpha Delta Phi literary society, one the oldest fraternal organizations in the United States.

According to Dick Williams, “extensive gardens once surrounded the property, and it remained within the Williams family for more than a century until it was sold to William H. Newton, a lawyer from Utica, in 1938.”