Hamilton bakery and cafe to expand into beloved space 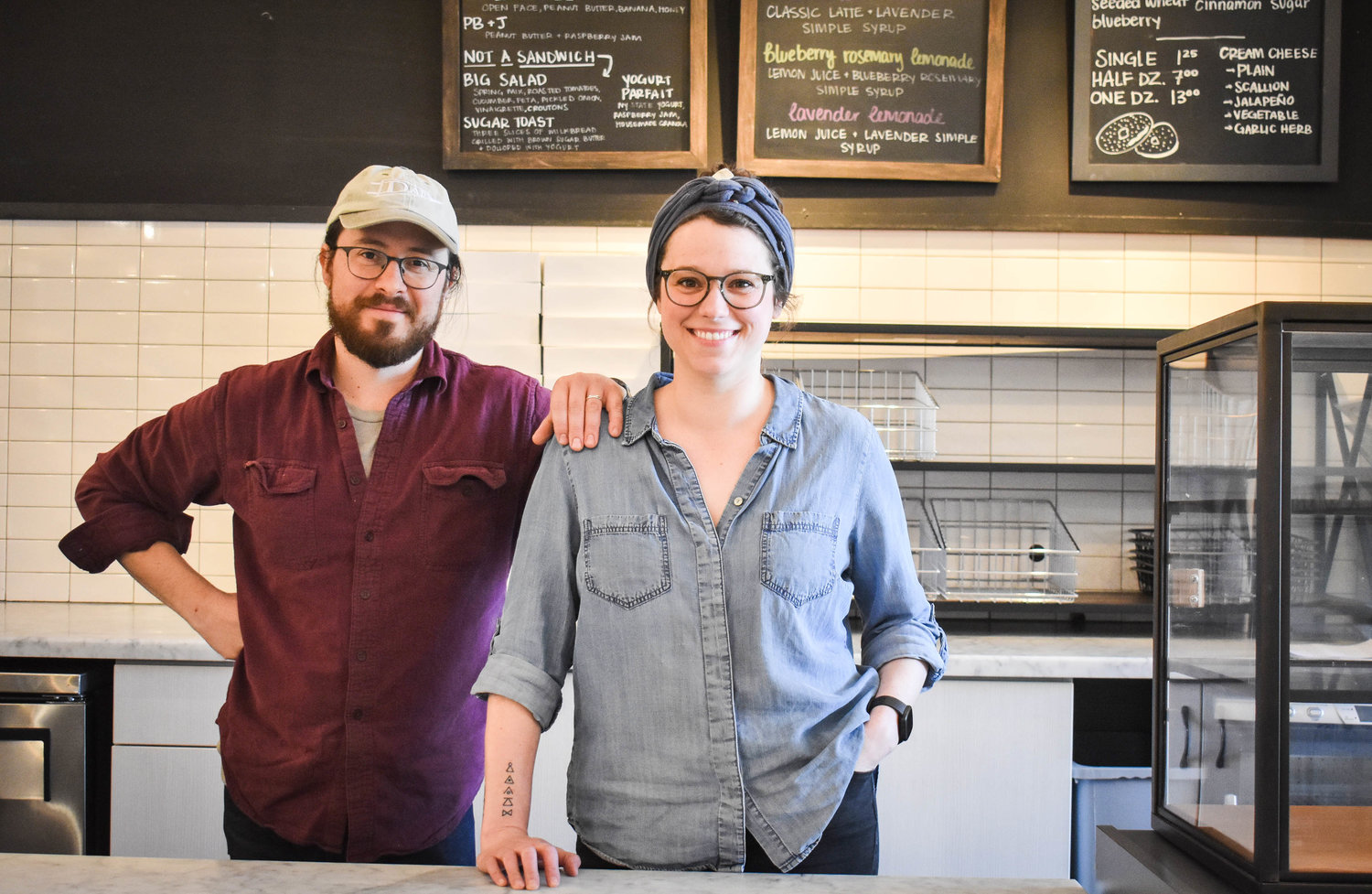 Flour and Salt Co-Owners Brendan and Britty O'Connor had their first date at 37 Lebanon when it was the Barge. They've now taken over the lease from previous tenant, the Rye Berry Cafe, to expand.
(Sentinel photo by Carly Stone) 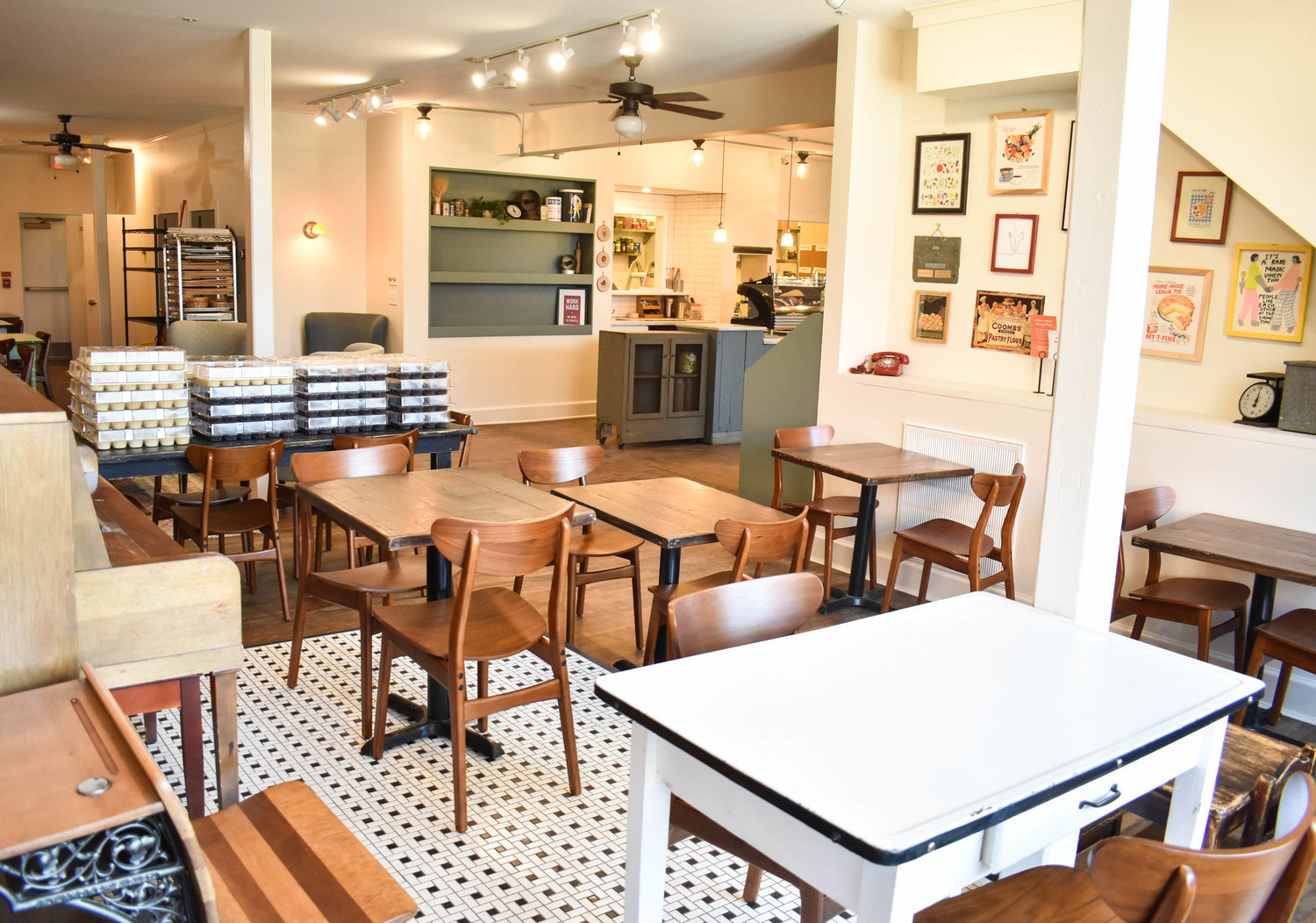 Inside the Flour and Salt expansion at 37 Lebanon Street. The space pictured is still in-process as the owners get ready for its grand opening on May 4.
(Sentinel photo by Carly Stone)
Previous Next
Posted Monday, May 2, 2022 12:48 pm
Carly Stone
Staff writer
email

HAMILTON — The stories of life at 37 Lebanon Street date back decades, often revolving around togetherness and community.

Now, a new chapter is about to begin as local business owners and Colgate alumni move in, making the space their own while continuing its legacy.

Britty and Brendan O'Connor — married co-owners of Hamilton businesses Flour and Salt Bakery and Cafe (FS) and Martha's on Madison (MOMs) — have taken over the venue on Lebanon Street to house the newest iteration of their brand.

With a second location, FS is splitting into two camps: one, the Bakery, which will remain at the original store on Maple Avenue; and the second, the Cafe, which will be just around the corner on Lebanon.

The new space will encompass the traditional Flour and Salt experience: buying bagels, grabbing a coffee, and ordering breakfast with friends, while FS's original site will be transformed into a high-production prep-kitchen and bakery churning out delicious cakes and desserts to meet rising demand.

By the end of the summer, Maple Avenue will incorporate a customer-facing area for ordering and enjoying desserts.

The decision to grow

Increasing production and distribution capabilities is something the restauranteurs have been deliberating for some time, but the timing was never right, the O'Connors explained. The opportunity to move into 37 Lebanon—a space near and dear to Britty and Brendan's hearts— came to light nearly three months ago. Just six days after the opportunity presented itself, the expansion was officially underway.

Flour and Salt: The Cafe is set to open May 4.

The couple have an emotional attachment to 37 Lebanon, as do many others in the community. "We have loved this space for a very long time," Britty shared.

The previous tenant, the Rye Berry Cafe, announced an abrupt closure on February 12, 2022.

"Unfortunately, the pressures of the industry on our family, particularly our inability to staff the kitchen to consistently produce the highest quality we expect, has left us at an impasse," read the announcement on the Rye Berry Facebook page. Over the last four years, the Rye Berry became a community staple, known for its quality artisan breads and its friendly, neighborly owners, Krista and Patrick Gramens. "We are ecstatic it will be taken over by some very dear friends of ours who are absolute stars and we know will do the greatest possible job that can be done," the post continued.

The O'Connors were a few of many who were sad to see the cafe go. Britty said the Gramens had reached out to her directly to see about making a deal.

This wasn't the first time a well-standing local gem has come and gone. Before the Rye Berry, the Barge Canal Coffee Company (also known as the "Barge") was one business that made its mark at 37 Lebanon for nearly two decades.

Described as "Hamilton's living room" by the Colgate Maroon news, the Barge encapsulated a cozy communal atmosphere much like that of "Central Perk" a coffee shop depicted on the television show "Friends". Students and residents alike came to study, order signature menu items, and occasionally enjoy live music.

The love for the Barge ran deep among its patrons. In fact, it was the very spot Britty and Brendan first met and later had their first date.

"It's such a gorgeous space to have a cafe and community gathering place," Britty added. "All of that is to say, it was kind of an offer we couldn't refuse."

The Flour and Salt brand has operated with a people-first mentality since opening its brick and mortar store in July 2016. With the introduction of Martha's on Madison in 2021, the O'Connors now employ nearly 30 people, who they say have been at the center of their decision making when it comes to the expansion.

Years ago, "we didn't have the staff, [and] we didn't have the extensive offerings that we do now that would have made it make sense for us to have both spaces" Britty said. "And we just didn't have the experience," Brendan added. Now, he says they have "a really great core team of people [and] we realized that this would be an opportunity for growth for a lot of them."

Several employees will be taking on new responsibilities and more wanted hours, the O'Connors said.

Flour and Salt: The Cafe will be much of the same but also something new. Seating capacity and variety will be greatly increased, and patrons can still enjoy the same menu items they've come to love, plus a few new options.

Britty shared cold menu items like chicken salad and regular salad are new additions, along with sugar toast—buttered bread covered in sugar thrown on the griddle. Omelettes may be in the cafe's future. Desserts will be less emphasized at this location.

In addition to the regular fare, the FS culinary team hopes to launch fun semi-regular pop-up food specials. "One of them was pockets, where you serve food that only comes in pockets" like empanadas, dumplings, and hand pies, Britty shared with a laugh.

Besides food, "I would love to open it back up for [live music], but...I would be interested to see what sort of demand there was from the students to really make it something," as the previous music scene was largely Colgate-driven, Brendan said. "If they want to do events here, then I want to do events here."

Many people wonder if Rye Berry staples, like homemade bread, will be available at the new cafe. "I don't want to focus on any of the things in a way that isn't high quality," Brendan said. So for now, the breads will have to wait.