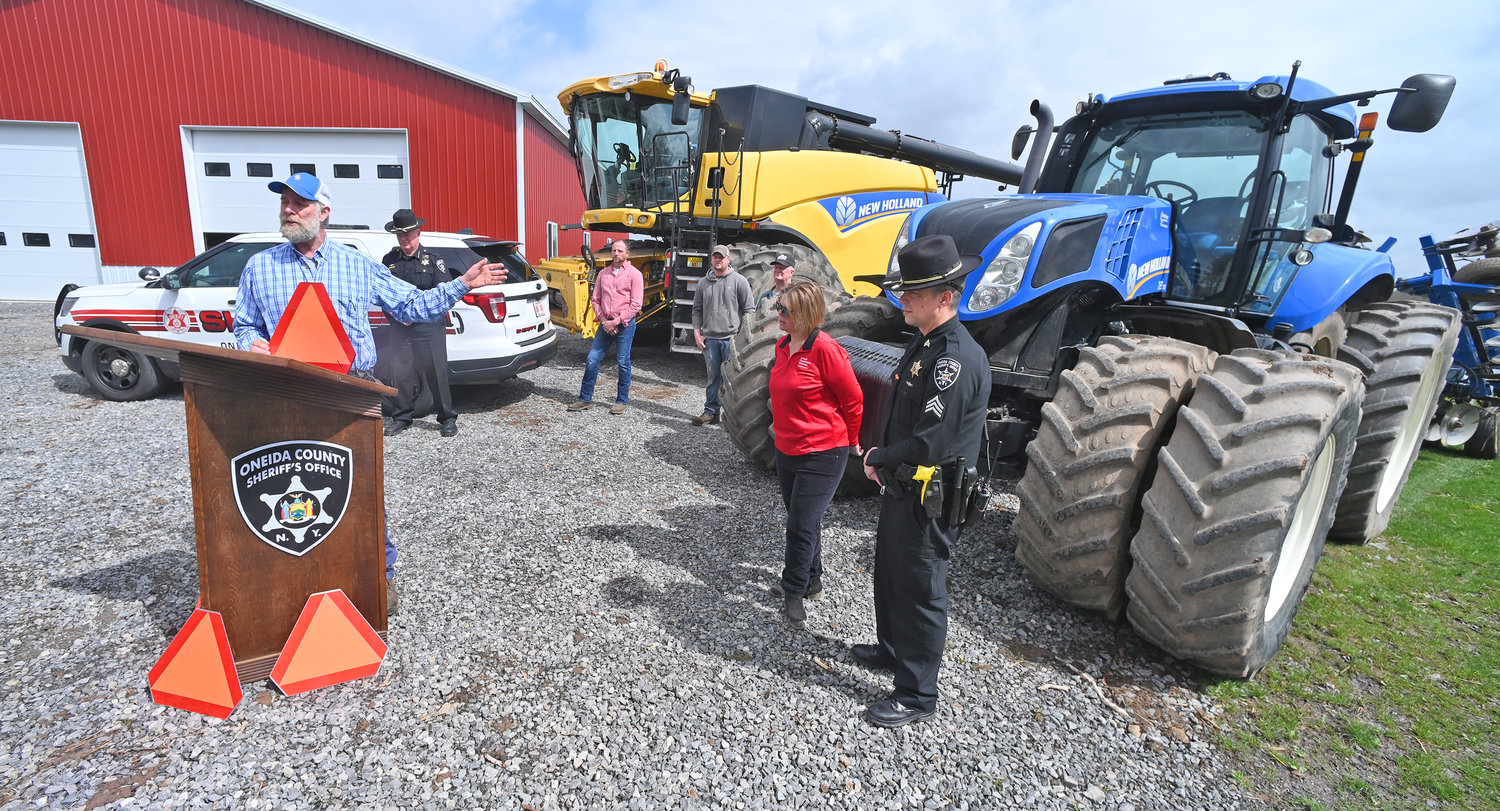 Steuben farmer Benjamin Simons discusses the use of SMV emblems and to alert motorist to SMV’s during the plowing and planting season, during a recent event with Oneida County Sheriff Robert M. Maciol. As summer approaches, farmers grow ever busier, and groups are urging state leaders to keep the overtime threshold for family farms to 60 hours.
(Sentinel photo by John Clifford) 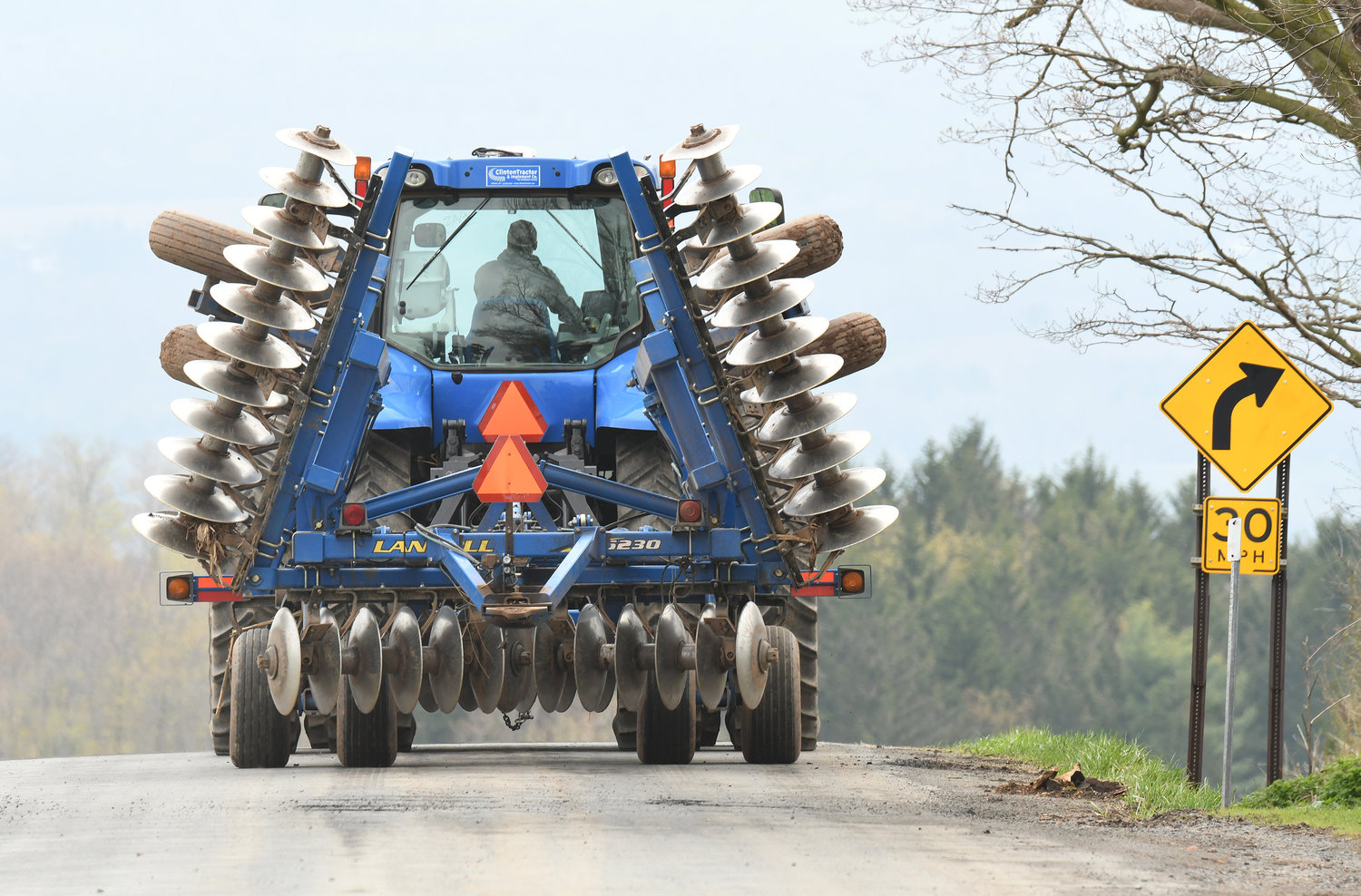 Third generation farmer Matt Brady drives farm equipment on Roberts Road in Paris to a field to plow and disc. As summer approaches, farmers grow ever busier, and groups are urging state leaders to keep the overtime threshold for family farms to 60 hours.
(Sentinel photo by John Clifford)
Previous Next
Posted Thursday, May 12, 2022 9:30 pm

ALBANY — The Grow NY Farms Coalition announced on Wednesday that the Business Council of New York State, the National Federation of Independent Businesses of New York, and Upstate United have sent letters to Gov. Kathy Hochul, urging her to maintain the overtime threshold at 60 hours on family farms across the state.

The letters, the coalition said, come on the heels of a letter from Lt. Gov. Antonio Delgado, who as a congressman expressed his disapproval regarding the New York State Farm Laborers Wage Board’s recommendation to lower the farmworker overtime threshold. Delgado said, “Lowering the threshold over the next ten years from 60 hours per week to 40 hours per week is not mindful of the dynamics of farming.”

“Family farms are facing some of the highest diesel, fertilizer, and feed costs in recent memory, and it is clear that any reduction to the current overtime threshold will be catastrophic for farms,” said Maureen Torrey, a Grow NY Farms Coalition Member and owner of Torrey Farms in Genesee County. “Agriculture is an industry unlike any other and farms simply cannot pass these increased costs on to consumers.”

“Maintaining the already negotiated 60-hour overtime threshold is critical to ensuring New York’s farms can retain skilled farmworkers while meeting the demands of local food pantries, school districts, and grocery stores,” Torrey added. “New York families, the next generation of farmers, and the state’s business community which depends on the success of our diverse agriculture industry, are counting on our elected leaders to make an informed decision. New York State must keep the overtime threshold at 60 hours.”

“The Business Council, while supporting the state’s farming industry, has concerns about lowering the overtime threshold as it would have a negative impact on farms, their workers, production, and ultimately consumers,” said Heather Briccetti, president and chief executive officer of The Business Council of New York State.

“Our family farms are some of the most rigorously regulated and inspected employers in New York State through the strong workforce protections in place at both the state and federal levels,” Briccetti added. “Given the unique work schedule of farms, we urge the Hochul administration to take a long and hard look at the Wage Board’s recommendation and the consequences that will be felt by New York families, farms, and the economy if the threshold is lowered.”

“Now is not the time to put even more pressure on a strained industry. We are strongly recommending that Gov. Hochul
keep the overtime threshold at
60 hours,” the state director added.