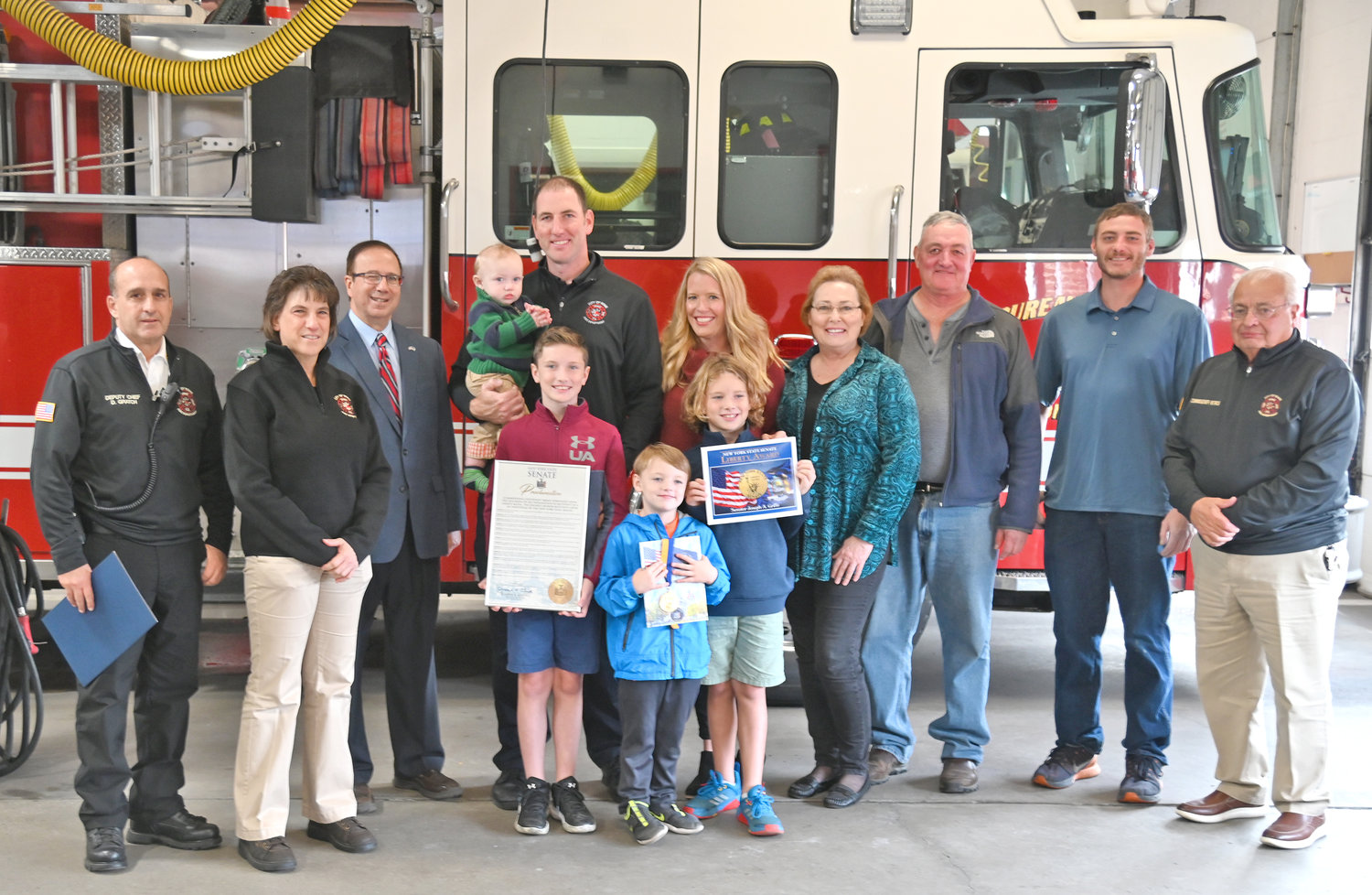 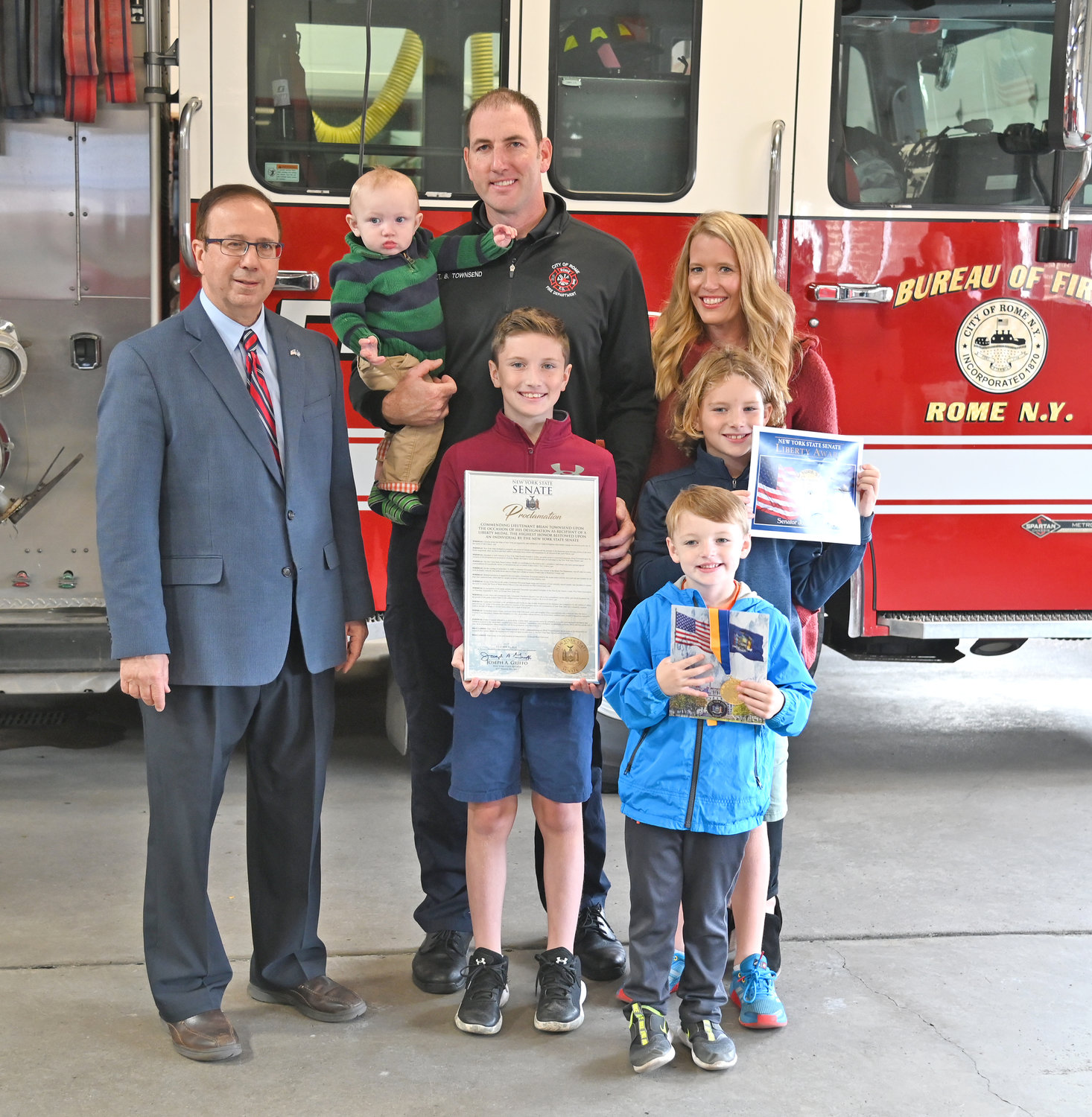 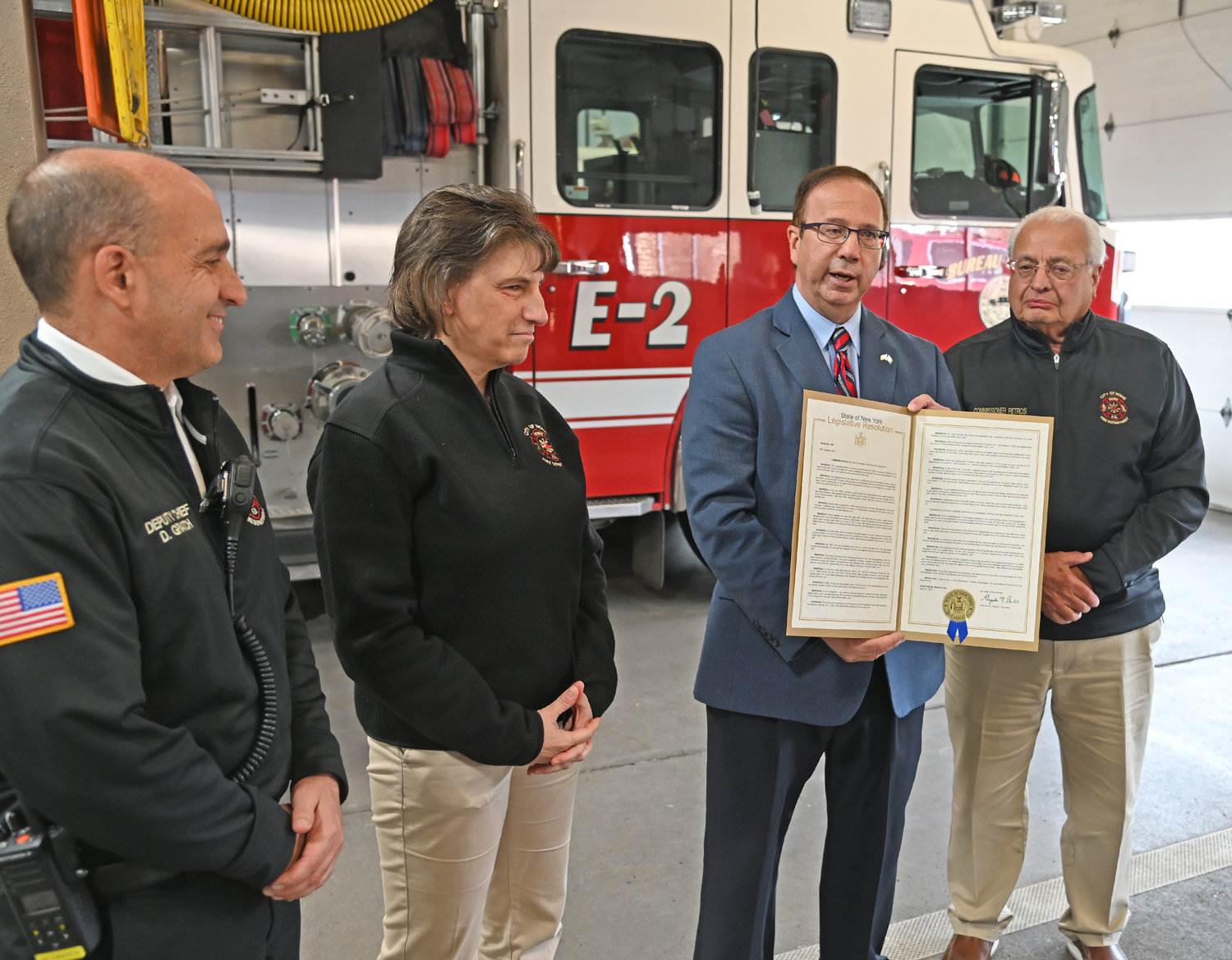 Rome Fire Lt. Brian Townsend Jr. was honored on Friday with the Liberty Medal — one of the highest civilian honors in the state — for his off-duty rescue efforts at a horrific boating crash in Herkimer County.

Townsend received the award from New York State Senator Joseph A. Griffo, who visited the Central Fire Station on Black River Boulevard to present the medal. A very humble Townsend was joined by his wife, his four children and his parents, including retired Rome Firefighter Brian Townsend Sr.

“I am very honored to receive the award,” Townsend said. “I appreciate the recognition of what myself and everyone there did that night.” Townsend said accepted the award on behalf of everyone that helped out at the scene, including bystanders, police officers and a nurse whose name he never learned.

“I’m definitely thankful for all of them,’ Townsend said, adding that he is confident any of his fellow firefighters would have done the same.

The Liberty Medal is given by the New York Senate to individuals who have merited special commendation for exceptional, heroic or humanitarian acts and achievements.

According to the Town of Webb Police Department, two boats collided on Fourth Lake in Herkimer County at about 8 p.m. Sept. 12, 2020. Authorities said a 22-year-old man crashed his ski boat into a pontoon boat, which had five people on board, including two young children. Four people suffered critical injuries, and one of the victims died from his injuries.

Townsend was off-duty with his family at a nearby camp when he was made aware of the crash. Authorities said Townsend rushed to the scene and was one of the first to arrive. Townsend began triage and treatment of the injured people, and was there to manage the scene so that Town of Webb police officers could focus on other crucial tasks.

“Without hesitation, Brian, who was spending time with his family, ran towards a chaotic scene not knowing what to expect when he got there,” Griffo said. “Things could have been much worse if Brian wasn’t nearby, and for that, we are all eternally grateful.”

Rome Mayor Jacqueline M. Izzo said she was not surprised to learn a Rome firefighter had acted so bravely.

“It’s a great culture here, and that permeates whether you’re in Rome or up north or in another state,” Izzo said.

Townsend was also honored last month as Firefighter of the Year by the Oneida County Fire Chiefs Association.

While at the fire station, Griffo also presented the mayor and Deputy Fire Chief David Gratch with a resolution from the New York Senate commemorating the Rome Fire Department’s 130th anniversary.