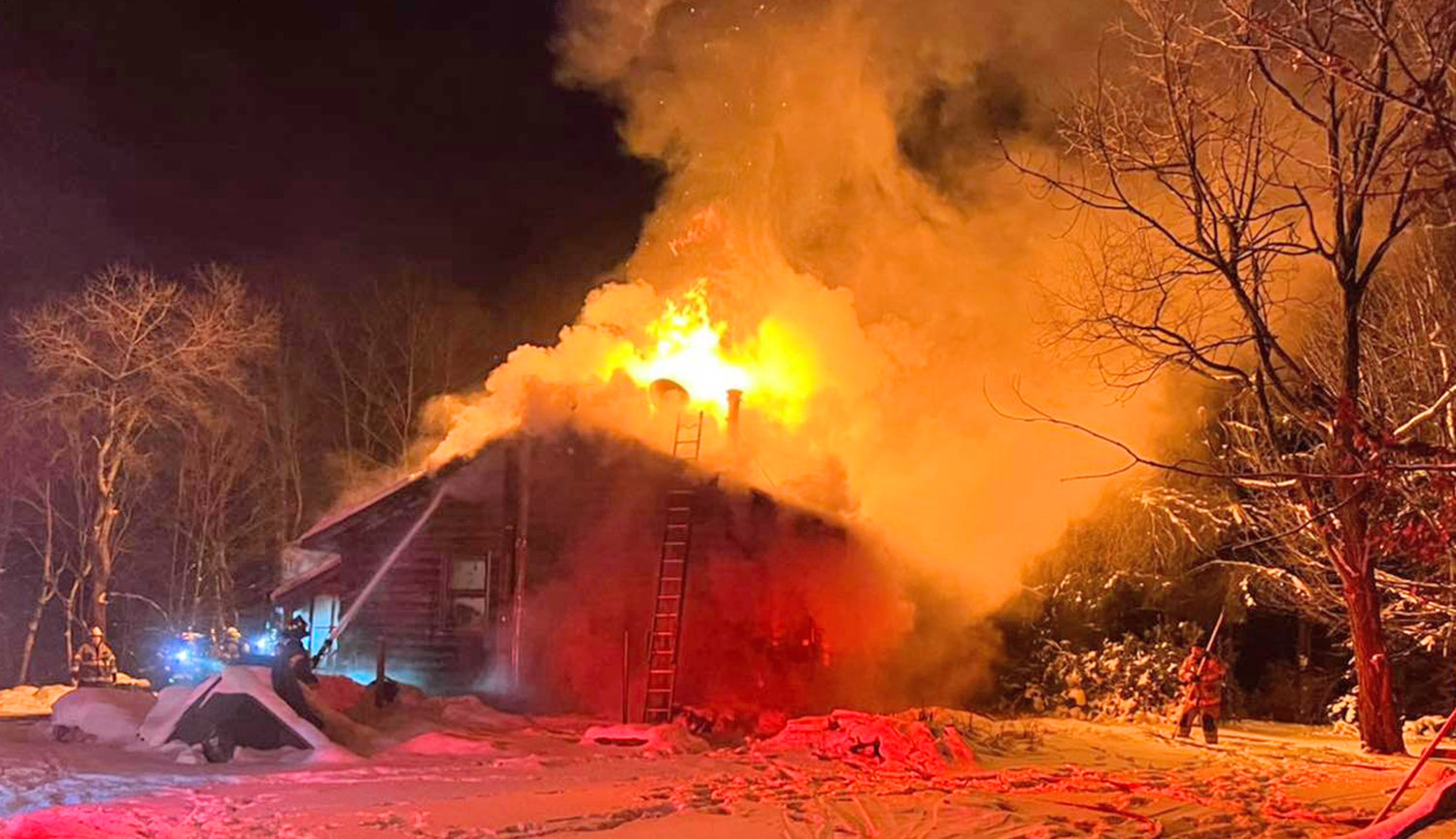 BURNING HOME — Firefighters battled this fire for at least two hours in very frigid temperatures at about 3 a.m. Sunday on Soule Road in the Town of Floyd.
(Photo courtesy the Western Fire Department) 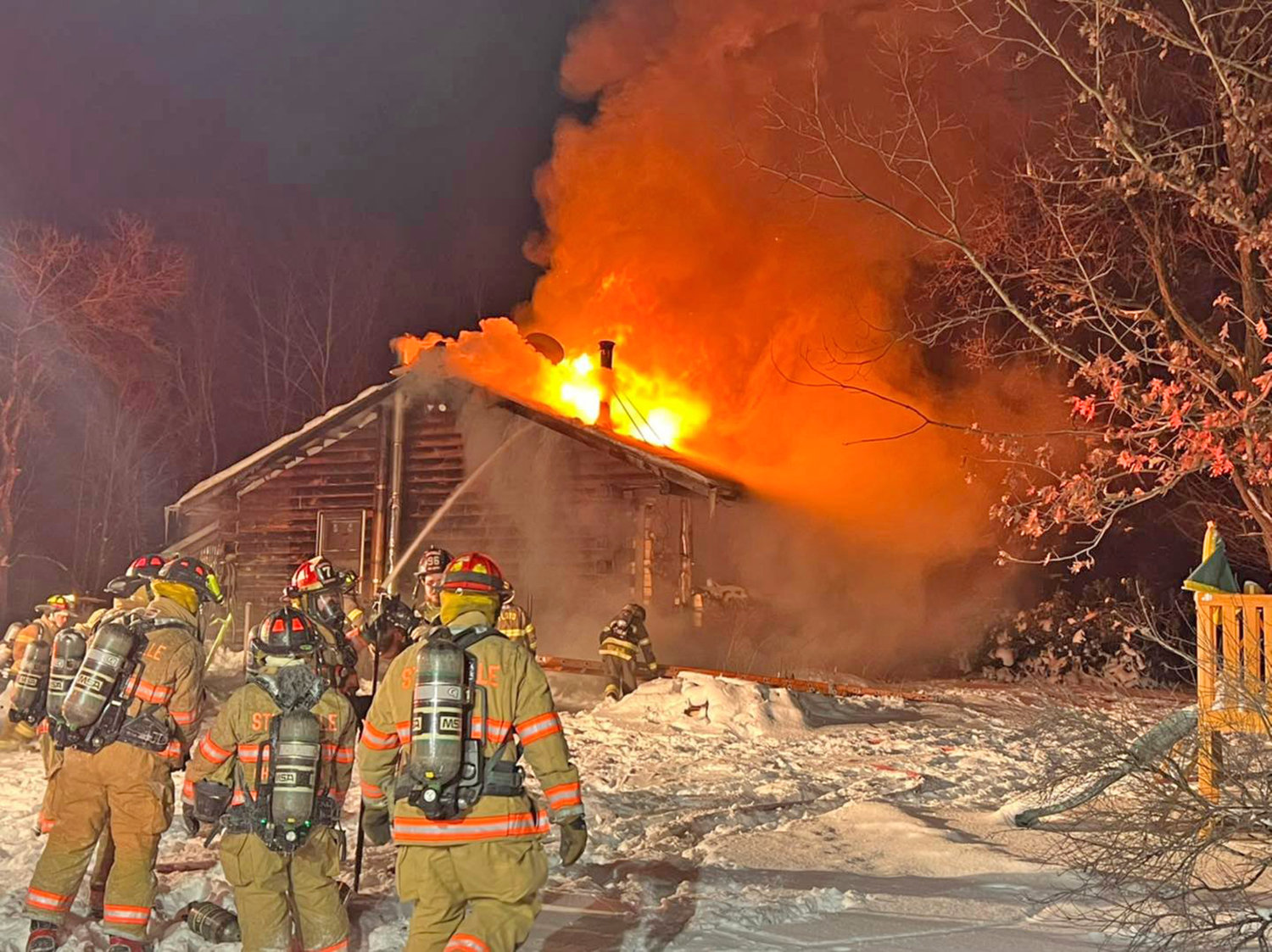 Cold winter weather this weekend led to a series of house and business fires throughout Oneida County and beyond. Fire officials struggled with ice and freezing temperatures as they fought multiple fires.

• A woodworking shop in the Village of Lowville in Lewis County was destroyed in a fire Friday afternoon, according to county fire officials. The alarm was raised at 2:43 p.m. Friday at 7730 Erie Canal Road, and responding volunteers found the workshop fully involved. Officials said the building and all of its contents were destroyed.

The cause of the fire remains under investigation, officials said. The Croghan, New Bremen and Beaver Falls fire departments responded.

• Nine people were displaced after a fire 1552 Dudley Ave. in Utica Saturday evening, officials stated. The alarm was raised at 5:30 p.m. and firefighters battled the blaze on the second floor and in the attic. The American Red Cross is assisting the nine residents, who escaped without injury, authorities said.

• One person was displaced from their home following a chimney fire on South Main Street in Middleville in Herkimer County Saturday evening, according to Middleville Fire Chief David Mueller.

“There was minor extension into the interior and exterior wall,” Mueller stated. He added that the old design of the masonry chimney made it difficult to reach the seat of the fire. Crews were on the scene for several hours cleaning up. The American Red Cross is assisting the one resident.

• A home was destroyed by fire at 8584 Soule Road in the Town of Floyd shortly before 3 a.m. Sunday, according to Floyd Fire Chief John Stark. Two residents were able to escape without injury, the chief stated. Multiple local departments responded and battled the blaze throughout the morning. “We had heavy smoke and flames coming out of the basement,” Stark stated. Volunteers launched an interior attack into the basement and controlled that fire, but by then, Stark said the flames had spread.

“As soon as it came out of the basement, it went right up to the roof,” Stark said. The flames took about two hours to get under control.

No one was injured and the two residents were able to escape, he noted. The cause of the fire remains under investigation.

• A fire was knocked down at Commercial Collision, an auto body shop, on Calder Avenue in Yorkville at about 2 a.m. Monday, authorities stated. Multiple departments battled the blaze through the morning.

“There’s a lot of damage,” said Yorkville Fire Chief Joseph Morosco. The fire was discovered by a Yorkville Village Police officer who could smell something burning but could not see the smoke because of the heavy snowfall, Morosco said. The officer eventually located the blaze, and responding firefighters headed inside the knock it down. Morosco said there was “a lot of char and deep fire” damage to a portion of the auto shop, with smoke and heat damage throughout the building. The chief said he does not believe the building or the equipment are a total loss, and that the owners are insured for the damage.