Fall Preview: Is it, maybe, back to normal at the movies?

For the first time in three years, the fall movie industrial complex is lurching back into high gear. Festival red carpets are rolled out. Oscar campaigns are primed.

Fall Preview: Is it, maybe, back to normal at the movies? 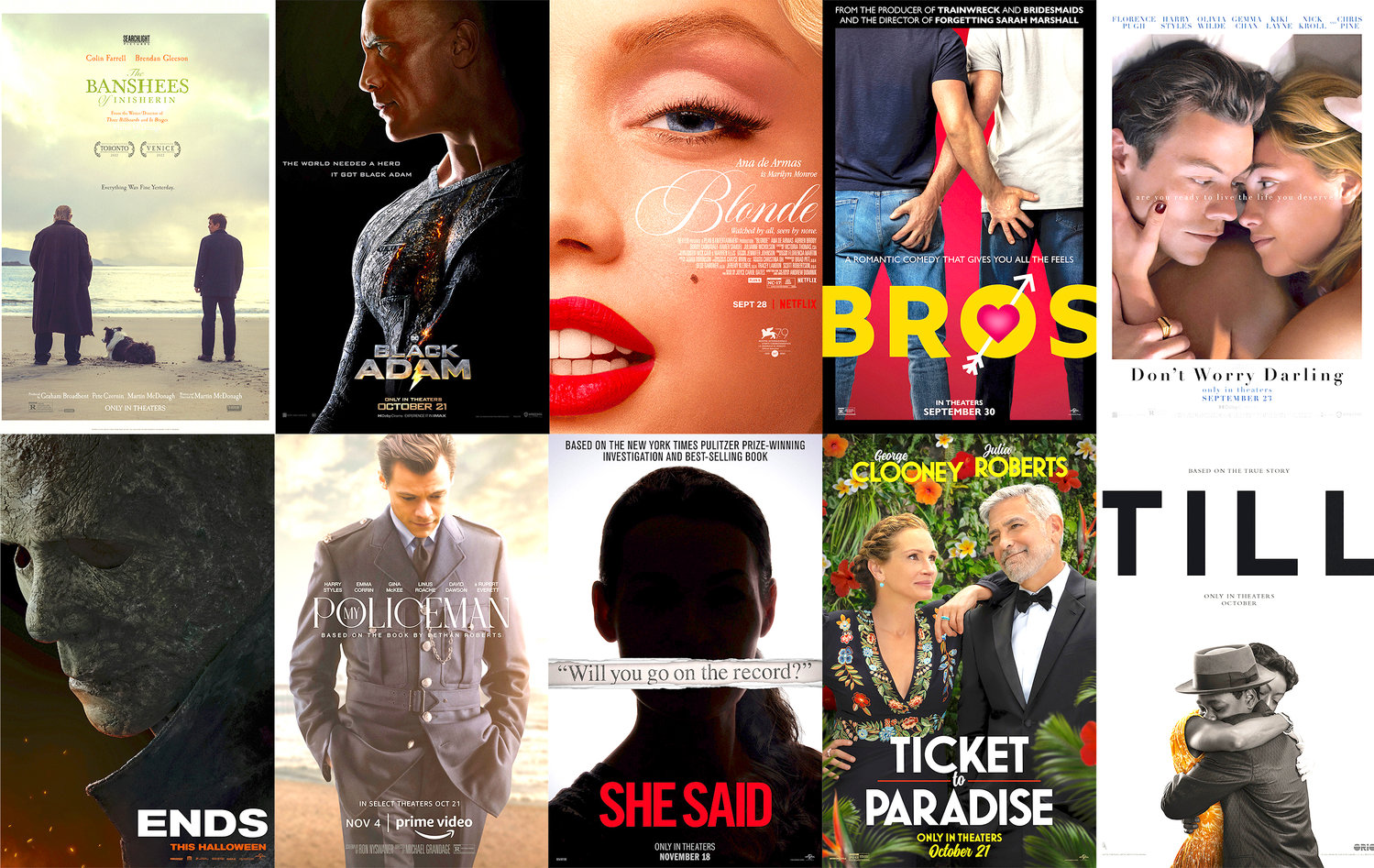 For the first time in three years, the fall movie industrial complex is lurching back into high gear. Festival red carpets are rolled out. Oscar campaigns are primed. Long-awaited blockbusters, like “Black Panther: Wakanda Forever” and “Avatar: The Way of Water,” are poised for big box office.

But after the tumult of the pandemic, can the fall movie season just go back to way it was? Many are hoping it can. After two springtime editions, the Academy Awards have returned to a more traditional early March date.

Some movies, too, are trying to recapture a before-times spirit. At the Toronto Film Festival in September, Rian Johnson’s “Glass Onion: A Knives Out Mystery,” has booked the same theater “Knives Out” premiered to a packed house almost exactly three years ago.

After an all-but-wiped-out 2000 autumn and a 2021 season hobbled by the delta and omicron COVID-19 variants, this fall could, maybe, just maybe be something more like the normal annual cultural revival that happens every fall, when most of the year’s best movies arrive.

“We’re all, I think, just trying to will it into existence as at least some version of what we knew before,” says Johnson. “As with everything, you kind of just have to dive into the pool and see what the water’s like. I’m really hoping that at least the illusion of normalcy holds. I guess that’s all normalcy is.”

But “Glass Onion,” which stars Daniel Craig’s Benoit Blanc in a new mystery, is also a reminder of how much has changed. After “Knives Out” was a box-office hit for Lionsgate, grossing $311 million worldwide for Lionsgate, Netflix shelled out $450 million to snap up the rights to two sequels. And while there were discussions about a larger theatrical release for “Glass Onion,” a more modest rollout in theaters is expected before the films lands Dec. 23 on Netflix.

The balance between theatrical and streaming remains unsettled. But after a summer box-office revival and an evolving outlook for streaming by Wall Street, theatrical moviegoing — with its billions in annual ticket sales and cultural footprint -- is looking pretty good. For the first time in years, moviegoing has a strong wind at its back. Or at least it did until an especially slow August sapped momentum due largely to a dearth of new wide releases.

That will be less of an issue as the fall season ramps up. “Wakanda Forever” (Nov. 11) and “The Way of the Water” (Dec. 16) may each vie with the summer smash “Top Gun: Maverick” ($1.36 billion worldwide and still counting) for the year’s top film.

But if much of the fall movie season is about restoring what was lost the last few years, for some upcoming movies, change is the point. “Woman King” (Sept. 16), directed by Gina Prince-Bythewood and starring Viola Davis, is muscular fact-based epic about a West African army of female warriors. To Prince-Bythewood, the filmmaker of “Love and Basketball” and “The Old Guard,” “Woman King” represents “the chance to reframe what it means to be female and feminine.”

“I don’t think we have ever seen a movie like this before. So much of our history has been hidden or ignored or erased,” says Bythewood. “‘Braveheart,’ ‘Gladiator,’ ‘Last of the Mohicans.’ I love those movies. Now, here was our chance to tell our story in this genre.”

“Bros” (Sept. 30), too, is something different. The film, starring and co-written by “Billy on the Street” comedian Billy Eichner, is the first gay rom-com by a major studio (Universal). All of its principal cast members are LGBTQ.

“It’s a historic movie in many ways,” says Eichner. “That’s not something we thought about when we were first developing it. Nobody sits down and says, ‘Let’s write a historic movie.’ We said, ‘Let’s make a hilarious movie.’”

“I want to make something that is just really entertaining and fun and interesting, but actually is my way of provoking conversations about real issues like body autonomy,” says Wilde. “I didn’t know it would be as timely as it is right now. Never in my wildest nightmares did I believe Roe would have been overturned right before the release of this film.”

Other movie production timelines seem to exist almost apart from our earthly reality. James Cameron’s “Avatar: The Way of the Water” will debut 13 years after 2009’s “Avatar” (still the highest grossing film ever), a follow-up originally scheduled for release in 2014.

Measuring the change in the movie industry is even harder when it comes to the span between “Avatar” installments. When the first “Avatar” was in theaters, 3-D was being billed (again) as the future. Barack Obama was in the first year of his first term. Netflix was renting DVDs by mail.

“A lot has changed but a lot hasn’t,” says producer Jon Landau. “One of the things that has not changed is: Why do people turn to entertainment today? Just like they did when the first ‘Avatar’ was released, they do it to escape, to escape the world in which we live.”