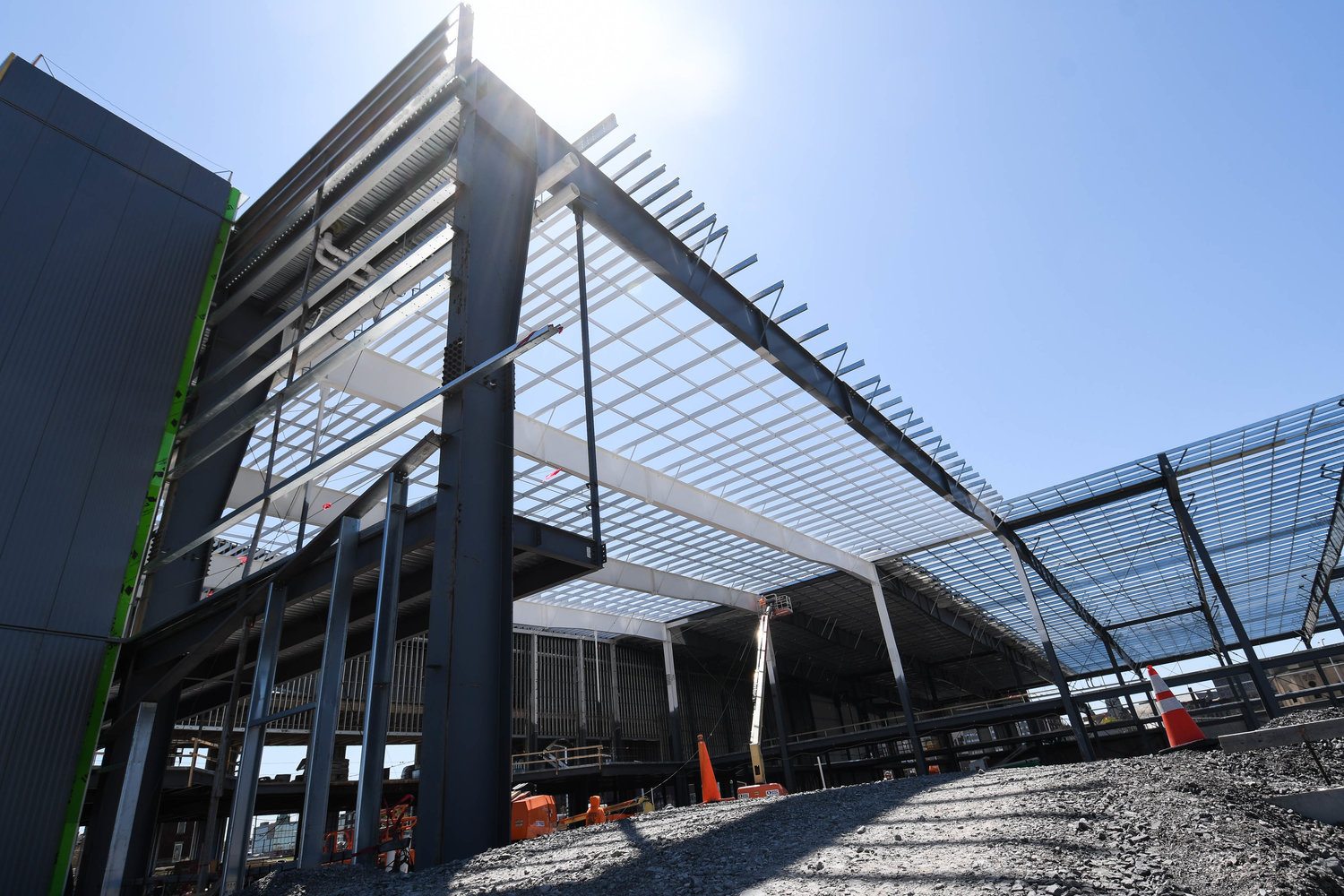 What a difference two weeks makes. In the photo at left, taken on April 30, work on the under-construction Nexus Center takes shape in Utica as shown from the Whitesboro Street side of the project. At right, progress is seen on Nexus Center construction in a photo taken Wednesday.
(Sentinel photos by Alex Cooper, left; and John Clifford, right) 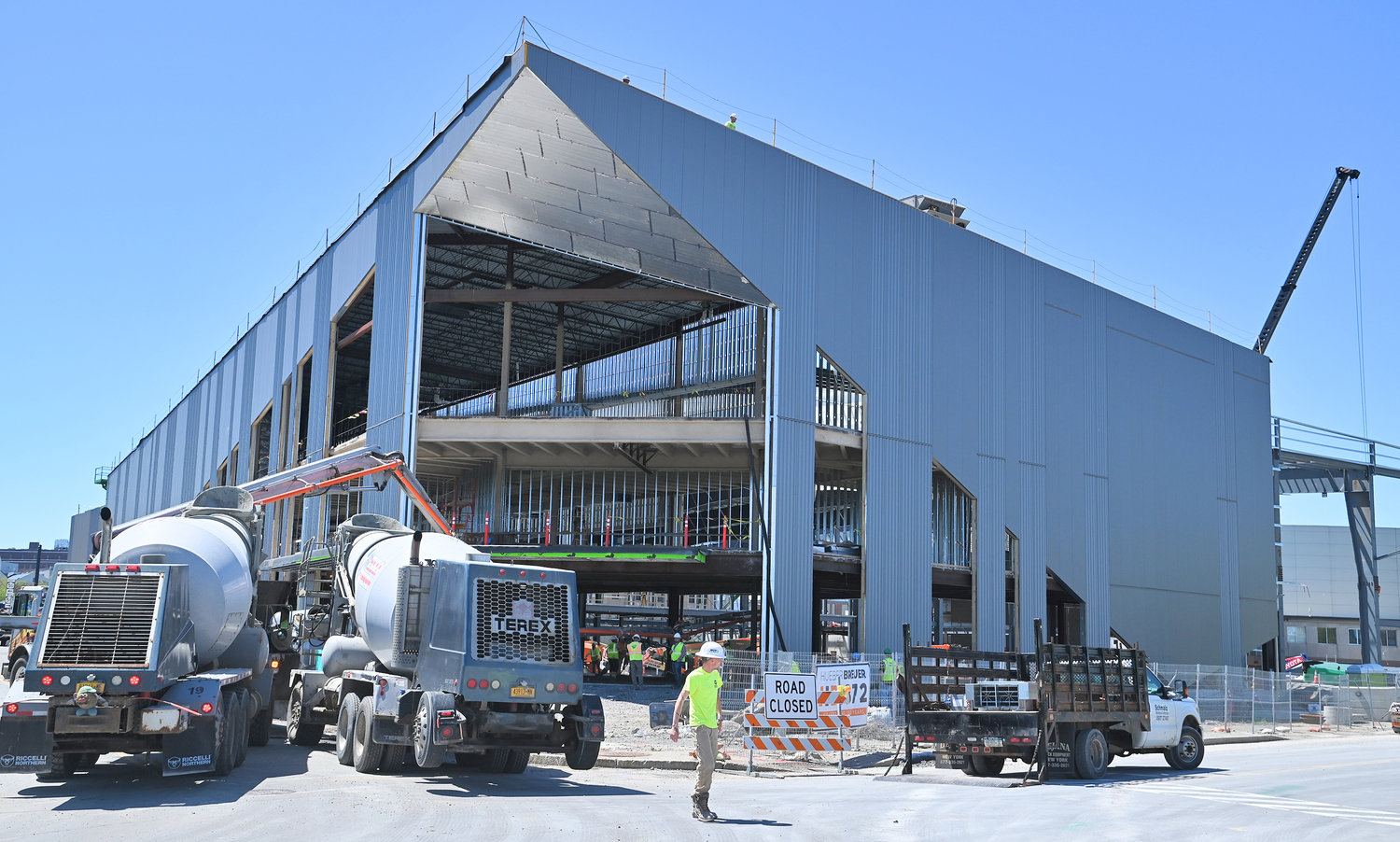 In this May 11 photo, progress is seen on Nexus Center construction from the Whitesboro Street side.
(Sentinel photo by John Clifford) 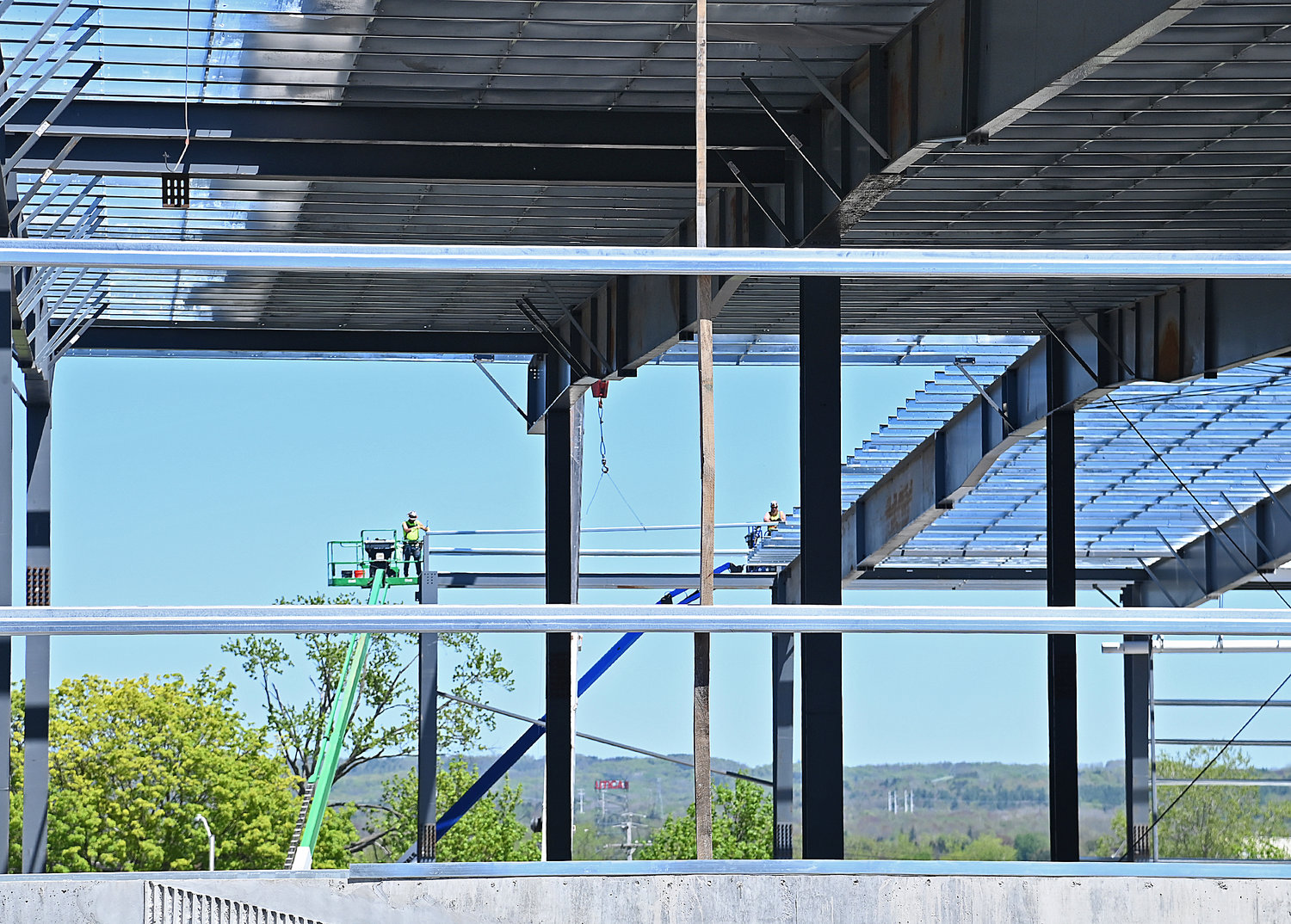 Nexus Center construction as seen from the Oriskany Street side of the site on May 11.
(Sentinel photo by John Clifford)
Previous Next
Posted Thursday, May 12, 2022 6:30 am
Jolene Cleaver
Staff writer
email / twitter

UTICA — Work on the Nexus Center continues to “chug along” with an expected completion date in the fall of this year, said Oneida County Executive Anthony J. Picente Jr., this week.

Picente said that with funding in place, the structure will be operational by the fall with some cosmetic finishes still be put in their place as the doors open to the public for events.

The indoor complex — which carries a $63 million price tag — is designed to host hockey, soccer and related tournaments. The Oriskany Street seated 170,000-square foot building — east of the Adirondack Bank Auditorium — is intended to anchor the neighborhood as the sports and entertainment-focused “U-District.”

The district concept was launched about five years ago, and had reached the starting line; however, with the onset of the coronavirus pandemic the project faced an apparent stalling, as months went by with no visible work being done.

Officials tied to the project later confirmed work was halted after beginning in early 2020 due to COVID-19 financial challenges, after there was uncertainty whether $22 million in funding announced by the state’s economic-development agency would be reimbursed by the state which faced revenue shortages in the wake of the pandemic.

Since then, a deal to re-ignite construction of Utica’s Nexus Center was approved by the county that allowed the Upper Mohawk Valley Memorial Auditorium Authority (the parent of the Adirondack Bank Center at the Utica Memorial Auditorium) to shop for bond rates for the project that the county would ultimately be a guarantor on.

The Authority ultimately secured a $30 million, 30-year bond at a 3.25% interest rate, with the county and Authority making simultaneous yearly payments — the county using money from bed tax revenues among other sources. The Authority holds the bond and the county will incur no debt-service.

In an April 6 state of the county address, Picente said tourism would be key in the revitalization of that area of Utica.

“The movement on the … Nexus (Center) has inspired me to look at the U-District differently. Obviously we have seen great success with the Adirondack Bank Center and we know it will only get better. But really, it encompasses all of Bagg’s Square and we need to think of it in those terms. … I’m proposing a U-District Redevelopment Corporation to streamline, direct and facilitate public and private investment into this area. This district, focused on sports, arts, entertainment and tech, will be bookended by two signature investments. The redevelopment of the county-owned Insight House property on one end, and the creation of the REA Wing Food Emporium on the other,” Picente said in his address.

Looking toward fall completion, Picente was confident, “Everything will be ready.”