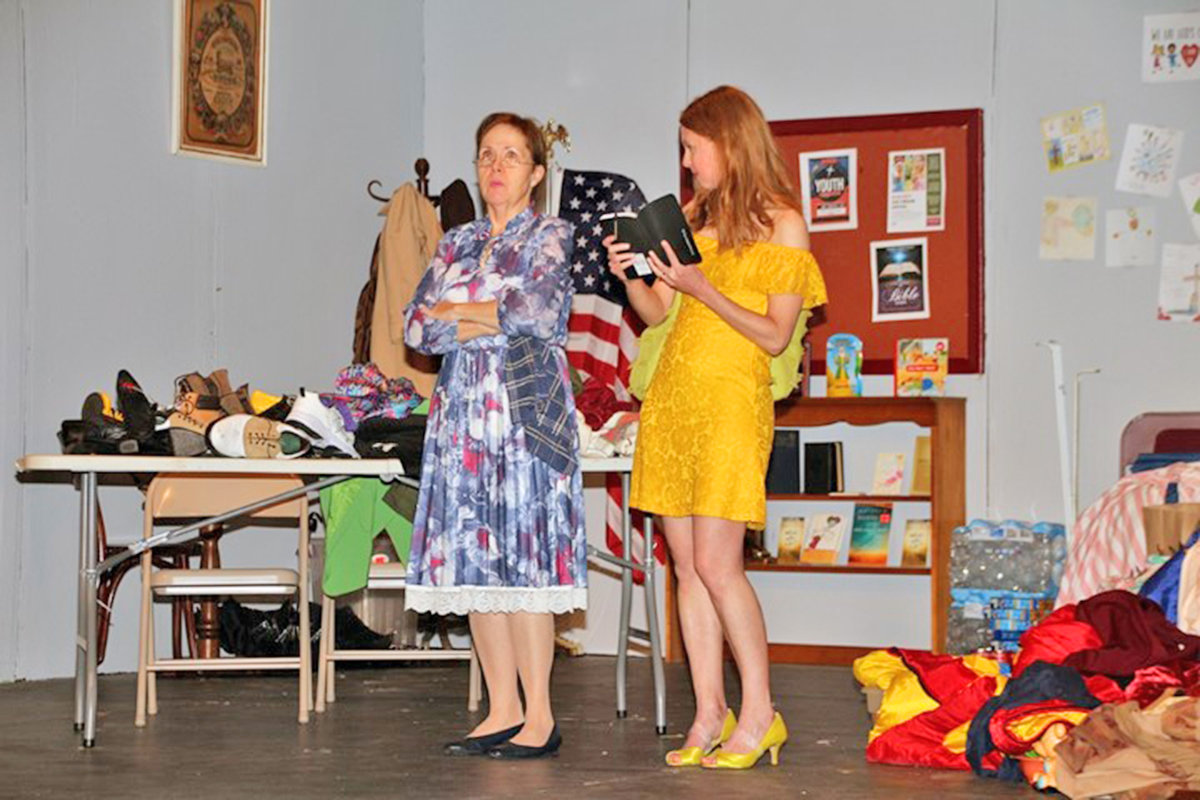 MORE THAN MEETS THE EYE — Janet Hanna, in the role of Bea Littleton, and Melissa Brass Maggio, as Janet Murchison, act out a scene in the Rome Community Theater’s production of "The Charitable Sisterhood of the Second Trinity Victory Church." Final performances of the show will be held tonight and Saturday at 7:30 p.m. and a matinee on Sunday at 2:30 p.m.
(Photo courtesy Rome Community Theater)
Posted Friday, December 17, 2021 12:15 pm
A.J. Parker

How do you open a new season of shows after almost two years bereft of live theater?

Rome Community Theater, 8911 Turin Road, has found its answer with its production of “The Charitable Sisterhood of the Second Trinity Victory Church” by Bo Wilson, directed by Laurie Marshall.

To an audience member going to a theatrical production, some for the first time in what feels like forever, there has to be some feeling that they’re chasing. The lobby decorations in character of the fictional Second Trinity Victory Church give us something tangible and immersive right off the bat, as does the gospel music that welcomes you into the theater itself.

It gives you that feeling that you you’re supposed to feel in the theater, that same feeling you feel in your own church be it real or fictional like this one. That feeling is communal, in more ways than one, and this is before the show even starts.

The set is really effective in serving as what it needs to be, the basement of the titular church somewhere in the South, cluttered with plenty of props and subtle details that make it feel lived-in and homey right from its first appearance.

The characters themselves are also as lived-in and believable, exactly what’d you’d picture of Southern women who are dedicated to their local church, charity, and community service. These characters are varied in their type and personalities, which is especially important in an ensemble piece like this, but they are united by a single purpose… not to mention that storm outside (rendered through impressive lighting effects and sound design) that leaves them stuck there with a new guest.

The cast do great work with these unique characters, with comedy coming naturally from these characters as they interact with each other. It just feels real and right.

But here’s the twist: it turns out we’re being led on a little bit here. Because I don’t really think this is a comedy, like you may have expected from its plot description. Yes, it is often funny, as the characters are humorous, crack wise, and the audience has quite a few laughs. But I think there’s something more to it, a sincerity and heart that you may not have expected looking at the show on paper.

There are quite a few twists, and characters aren’t often what you’d expect of them. Granted, that is part of the fun, but in the second act it’s almost as if the characters lurch back in forth as to who they really are, and they’re not what we expect. It’s an interesting bit of tension in a show that didn’t really have it before. But that tension is deflated as the natural conversation that defined the first act takes over again. And the realness of it all given by the cast and the director in its heart and in the action on stage makes the whole thing feel all the more sincere.

That sincerity carries it through a second act, and it unfolds in a way that ends up being genuinely heartwarming.

Viewers have a few last opportunities to catch “The Charitable Sisterhood of the Second Trinity Victory Church” with performances set for 7:30 p.m. tonight (Friday, Dec. 17) and Saturday, and also at 2:30 p.m. on Sunday.

— Editor’s note: The reviewer, A.J. Parker is a member of Rome Community Theater.