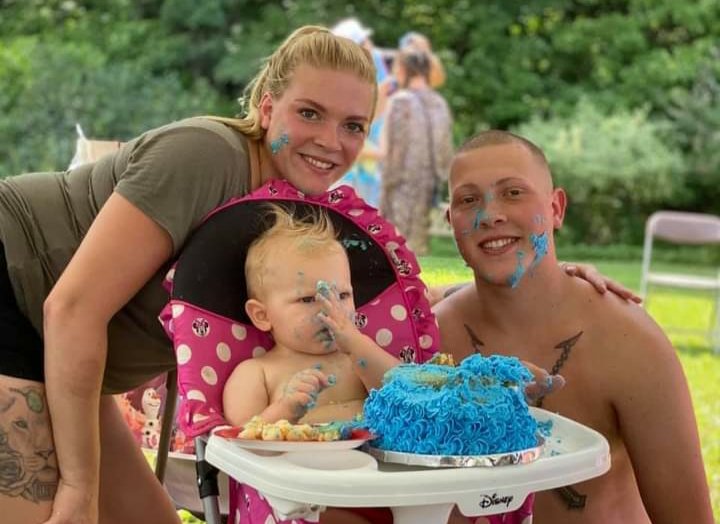 CELEBRATIONS — Courtney Sanborn and Tyler McBain celebrate their son Maverick’s birthday with cake and treats. Friends and family of McBain, who was killed in August 2020, invite the public to a community event to raise awareness of gun violence and drug addiction.
(Photo submitted) 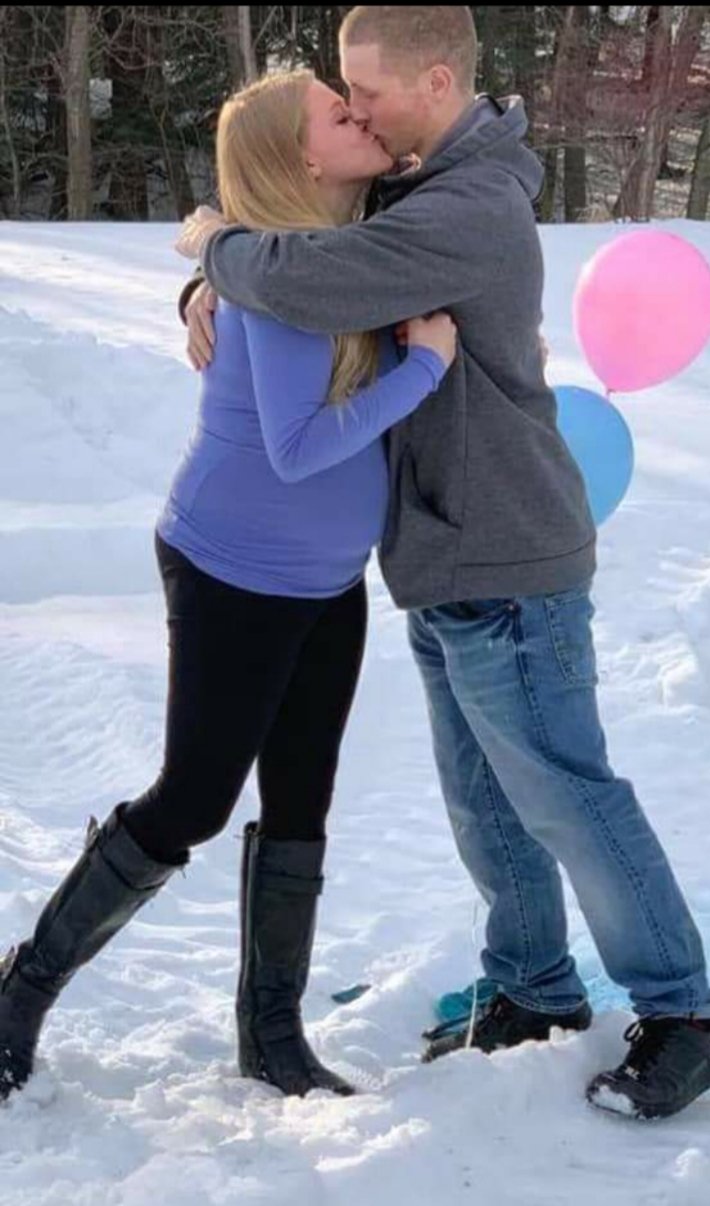 A DAY OF HOPE — Tyler McBain kisses his girlfriend Courtney Sanborn on a winter day. McBain was killed in August last year after two men broke into his home. His friends and family invite the public to Veteran's Field in Oneida on Saturday for a community event to raise awareness.
(Submitted Photo) 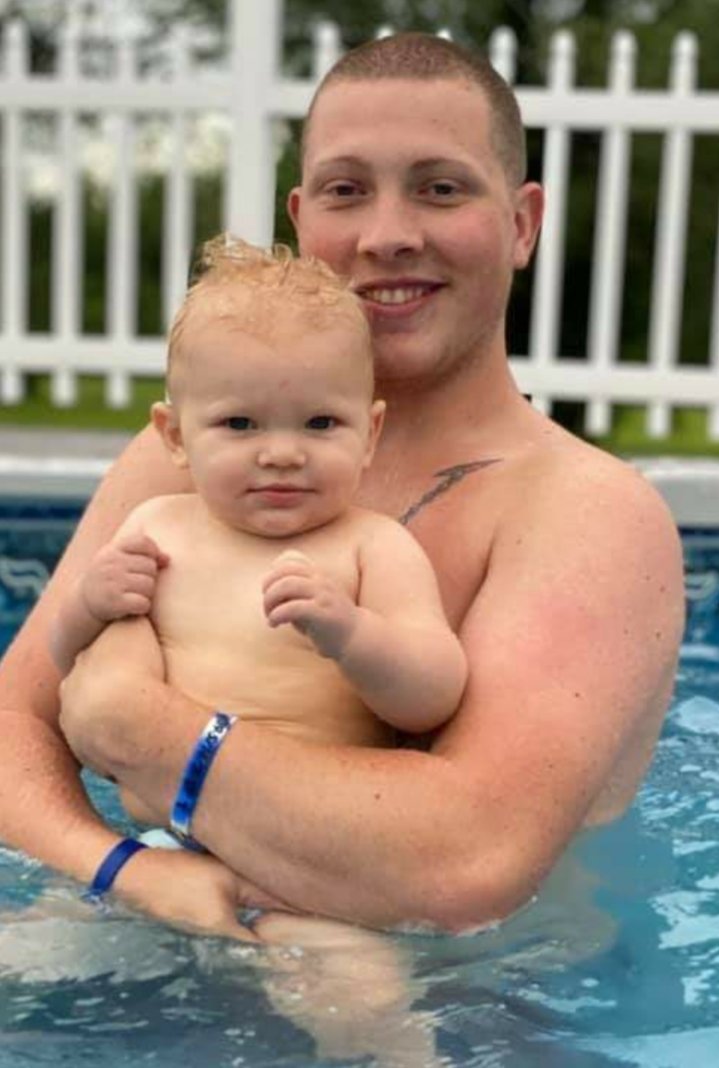 MAKING CHANGES — Tyler McBain holds his son Maverick. After going through rehab at Tully Hill, McBain was making changes in his life and had plans to become an addiction counselor. He was 22-years-old when he was killed.
(Submitted Photo)
Previous Next
Posted Saturday, August 7, 2021 12:00 pm
Charles Pritchard
Staff writer
email

ONEIDA — Tyler McBain was looking to start a new chapter of his life after years of struggle and addiction, friends and family members say.

McBain, 22, and his girlfriend, Courtney Sanborn, had a son, Maverick, in July 2019; it was a life-changer, Sanborn said, providing the motivation he needed to get help and become sober. After going through recovery, McBain had decided to become an addiction counselor, she said, to help people going through similar struggles.

McBain, his girlfriend said, didn’t have the easiest life growing up, having lost his father when he was 12-years-old and started using drugs shortly after that. “Tyler started using when he was young and he went to rehab a few times,” Courtney said. “But this last time, he was motivated by his son. After we had Maverick, everything changed for him. It wasn’t about him anymore or his problems. He had a child in his life.”

Courtney said Tyler went to Tully Hill Treatment and Recovery Center and did everything he could to change his life. “He went to meetings every night, and I’d go with him to be there for him,” Courtney said. “He was clean almost 11 months at the time of his death. Almost a year clean. And that was so upsetting. He was sober for so long, and then somebody...”

In August 2020, McBain was killed, police say, after two men broke into his Oneida Castle home, allegedly to steal marijuana. The two have been charged and are expected to stand trial by the end of the year.

The loss, Sanborn said, has been shattering, but in grief, friends and family are choosing not just to remember the many positives about McBain, but share his hope to help others who experienced similar struggles. As a result, they have organized “A Day of Hope in Memory of Tyler McBain” today, Saturday, Aug. 7, at Veteran’s Field in Oneida starting at 10 a.m. and lasting into the evening, in hope of raising awareness in the community of gun violence and drug addiction.

“Tyler was involved with his community and loved it,” Kelley Sanborn, Courtney’s mother, said. “So we’re holding a community event to raise awareness for gun violence and drug addiction recovery.”

McBain, both Courtney and Kelley said, had a huge heart with seemingly endless love for his friends, family, and community. “He’d give the shirt off his back to anyone who needed it,” Courtney said. “And it didn’t matter what you were going through. He didn’t judge you. Not like me. I had always been a judgmental person, but he helped me see the light in everything.”

For Kelley, there were two choices — succumb to anger or to do something that Tyler would have wanted them to — use his experience to help others.

To that end, A Day of Hope will feature activities for children, including games with prizes, a bounce house and a kickball tournament among others. In addition, food and snacks will be available, and Madison County BRiDGES will be holding NARCAN training seminars. Tully Hill will be on hand with a booth to provide information on treatment services and recovery. There will also be a variety of crafters and vendors.

Kelley said she considered this the event to be the first of many. “We plan on doing this every year, in Tyler’s memory,” Kelley said. “Because he would have done great things.”

For information, go to the event’s Facebook page at https://www.facebook.com/TylersDayofHope/.