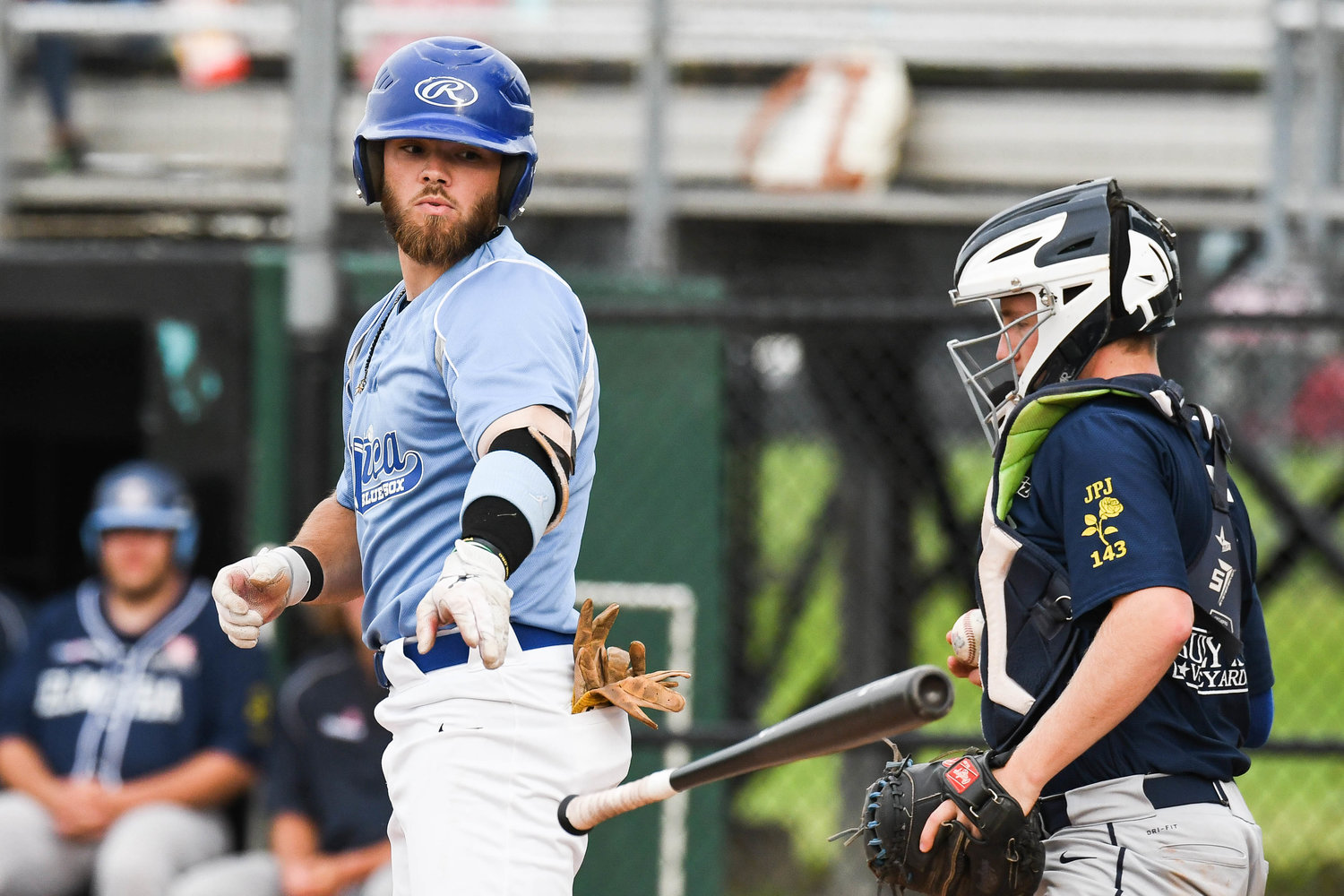 Ryan Enos was a key player for the Utica Blue Sox this summer. The Oriskany standout has recently gotten the opportunity to play for a team in the well-known Cape Cod Baseball League.
(Sentinel file photo by Alex Cooper)
Posted Thursday, July 28, 2022 8:23 am
Ben Birnell
Sports writer
email / twitter

Ryan Enos’ impressive year in baseball has another chapter.

This summer, Enos continued his strong play with the Utica Blue Sox in the Perfect Game Collegiate Baseball League (PGCBL).

Recently, Enos got a new opportunity: Getting to play in the Cape Cod Baseball League (CCBL). The 10-team league located on the hook-shaped peninsula of Massachusetts is considered one of the top collegiate summer leagues with countless players from the NCAA Division I level. Notably, more than 1,000 players who have spent time in the league have appeared in Major League Baseball.

Enos, who plays infield and outfield, said he had not considered playing in the CCBL this summer. That changed when his former coach at Oswego, Scott Landers, reached out to Enos. Landers coaches the CCBL’s Bourne Braves.

“He texted me and said ‘I might have a couple spots open’ because they had a couple kids leaving for the (MLB) draft or something else,” Enos said. “He said ‘If there is a spot open, would you want to play?” I said ‘yeah, of course.’”

He is able to play for Landers and Bourne because Enos is transferring to NCAA Division I East Tennessee State University (ETSU) next season. Otherwise, there’s a rule forbidding players from being on a summer team with their college coaches.

“When the opportunity came, I was really excited and had to take it,” Enos said. “I didn’t know much about the league. I just knew it would be a good opportunity.”

Landers has spoken highly of the 23-year-old Enos. Landers is also a longtime friend and teammate at SUNY Cortland of Utica Thomas R. Proctor coach Steve Strife, who is Enos’ uncle.

“(Ryan is) not only a great baseball player, he’s a great human being,” Landers told the Sentinel in June. “He’s very motivated, he’s a perfectionist, and he will find a way to win.”

Enos played 29 games with the Blue Sox in his third summer playing for the team. His last game was July 14, finishing with a .346 batting average, 11 doubles, 11 walks, a home run and 20 RBIs in the PGCBL, which has teams around upstate.

“I loved playing in Utica. I’ve always enjoyed playing there and had a great time,” Enos said.

Enos made his debut with Bourne on July 17 and has appeared in five games entering the team’s contest Wednesday against Harwich.

He entered Wednesday batting .200 with a walk and three stolen bases.

“It has been awesome. Playing with some of the best players in the country has been just a great experience,” said Enos, who is living with a host family. “I feel like you get better playing every day working and learning with these players.”

Enos isn’t the only player in the CCBL with ties to the Mohawk Valley. Roman Kimball, a New Hartford native who recently announced he’s transferring from the University of Notre Dame to the University of South Carolina, plays for the Chatham Anglers. Over four games, Kimball is 2-0 with a 1.05 ERA in 17 innings.

Bourne entered Wednesday closing in on clinching a playoff spot in the five-team West Division. The playoffs begin next week.

Enos said he was excited about the opportunity to also play at Worcester’s Polar Park, which is the 9,500-seat home of the Boston Red Sox’s Triple-A affiliate.

“It is a bunch of different experiences that I wouldn’t have gotten in Utica. It has been cool,” Enos said.

He said the biggest difference from the PGCBL to the CCBL is the speed.

“The pitchers are throwing harder. A lot of them have two or three good pitches that they can throw at any time,” Enos said. “That’s a little bit of an adjustment. Balls are hit hard and everyone is running hard.”

He’s also looking forward to playing for ETSU. He hasn’t looked too far ahead, but would like to play baseball as long as he can.

“I’m just going to enjoy my time (in Tennessee),” he said. “Hopefully I win a spot when I get there and make the most out of opportunity.”