Peterboro was the center of the abolition movement, and to this day, its people continue its efforts to overcome racism and discrimination and to advocate for equal rights. 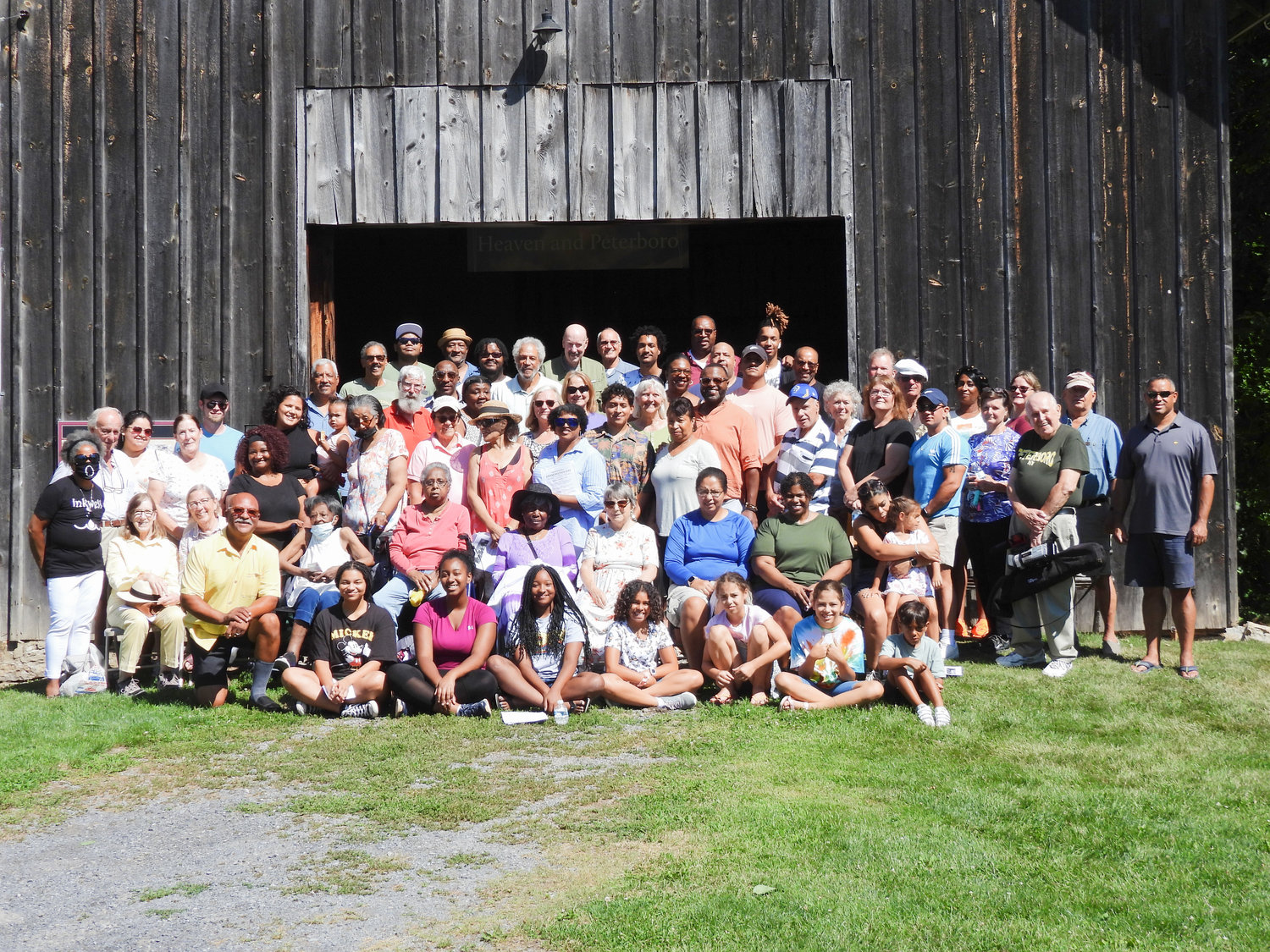 People gather for the annual Peterboro Emancipation Day photo, marking another celebration with a group photo of all in attendance at the Gerrit Smith Estate on Saturday, Aug. 6.
(Sentinel Photo by Charles Pritchard) 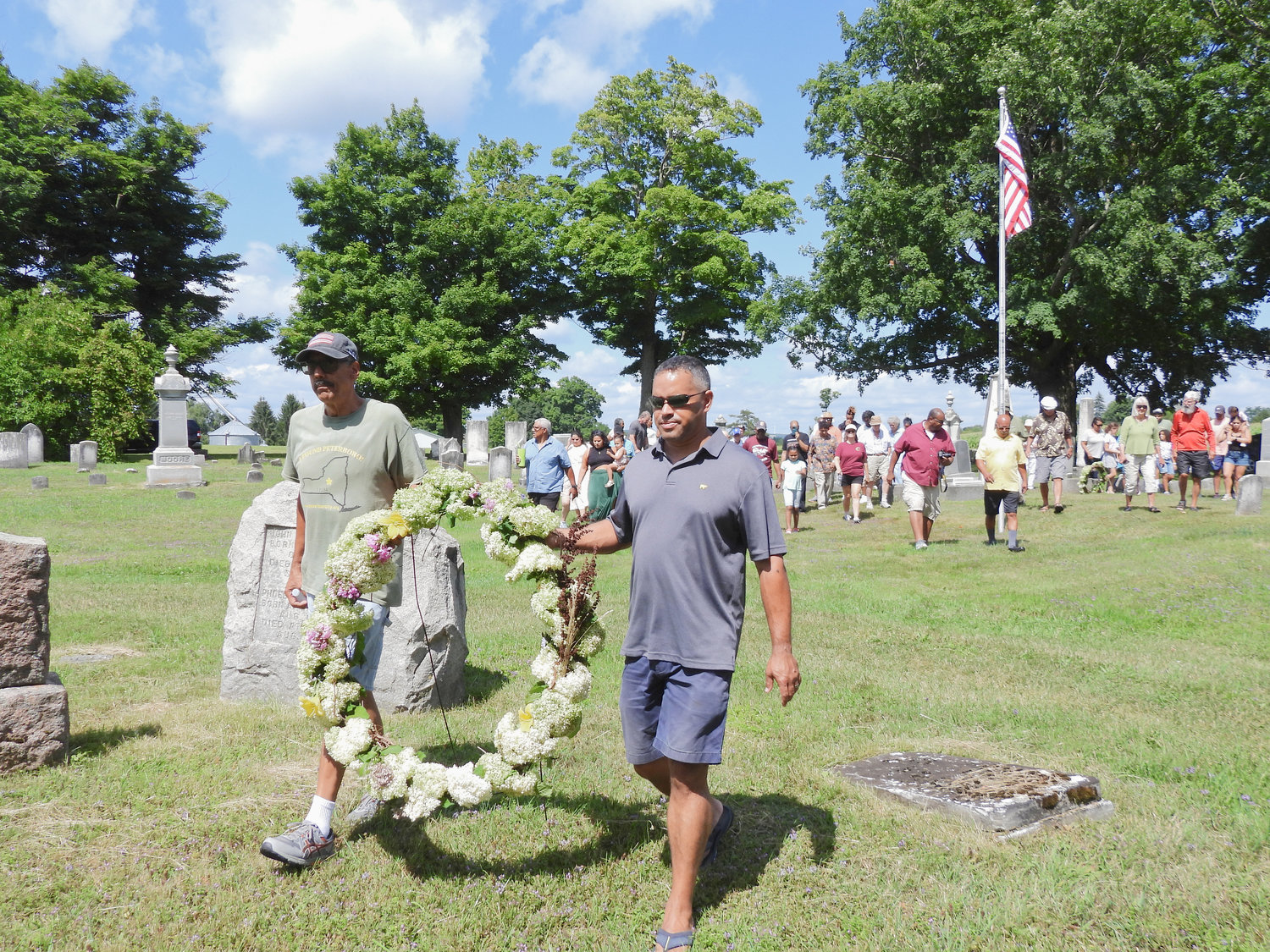 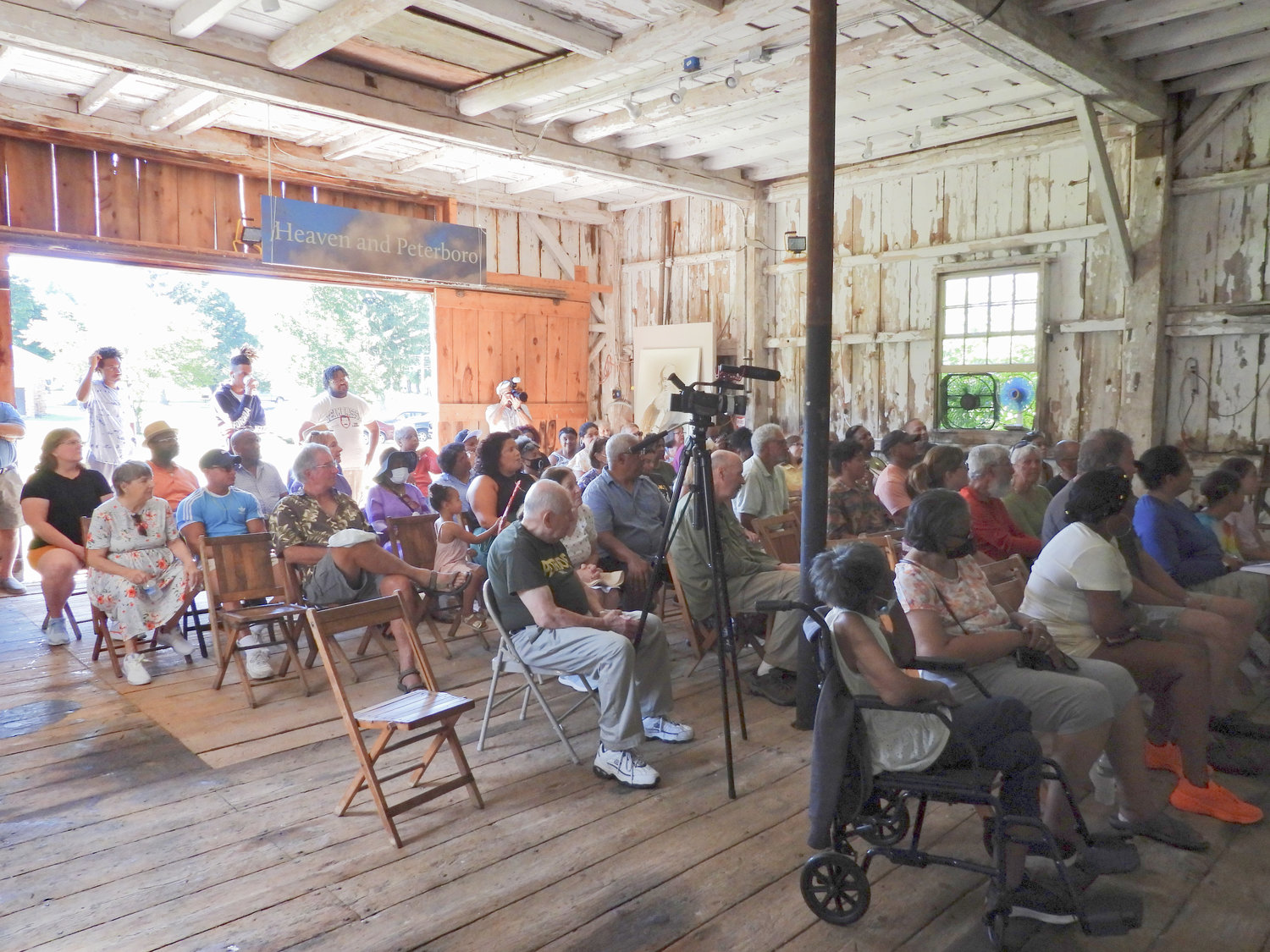 PETERBORO — Peterboro was the center of the abolition movement, and to this day, its people continue its efforts to overcome racism and discrimination and to advocate for equal rights. On Saturday, people flocked to Peterboro for the 12th annual Peterboro Emancipation Day to help celebrate that legacy.

Emancipation Day has been an annual event starting in 2010, but its first celebration began much earlier, in 1925, according to a Madison County Times in a July 17, 1925 article, which reported a day filled with music, speeches, sports, dances, dinner, and a parade.

In an article by the Oswego Palladium who picked up the story and ran it on Aug. 8, 1925:

With gratitude heartfelt, more than 600 Negroes of Central NY made a pilgrimage yesterday to the Gerrit Smith mansion in Peterboro, where appropriate exercises marked the first Emancipation Day. Unscarred by the ravages of time and the inroads of weather the mansion stands today virtually as it stood during the civil war when it marked the beginning of the historically famous underground railroad through which hundreds of southern negroes made their way to Canada through Utica on their way north. Smith was one of the North’s prominent abolitionists and boon companion of William Lloyd Garrison and John Brown, champions of slaves. Gerrit Smith Miller grandson showed the visitors a permanent memory of the gratitude of the slaves whom his grandfather helped. It was a massive volume containing the names of 3000 negroes who had passed thru Peterboro.

Emancipation co-chair Max Smith reflected on the Oswego Palladium article, remarking on how far Oswego was from the little hamlet of Peterboro on Emancipation Day. But more than anything, Smith was moved by how many people had made the trip to Peterboro that warm Saturday mid-morning.

“Every time I come up the hill that first week of August and cars start pulling into the Gerrit Smith Estate, I start welling up,” Smith said. “I can’t help it. And I hope that means you know why. We come here to celebrate what’s written on that sign [over the entryway] ‘Heave and Peterboro.’ The people that came to this community realized that America was beginning a grand experiment that had been going on for more than a hundred years but had not been living up to its creed.”

“That all people, all men, all women are created equal,” Smith declared. “So they convened here at Peterboro often to continue that grand experiment. And that’s why we come here and celebrate what they did, learn from it, and be inspired by it. Because what they began continues.”

Smith lead the gathering with a spiritual song, “O, Freedom.”

“Oh, freedom, Oh, freedom Oh freedom over me And before I’d be a slave I’d be buried in my grave And go home to my Lord and be free Oh, freedom.”

“We’ll do our best, as we do each year, to follow in those footsteps,” he said.

After the 10 a.m. gathering, the around 50 attendees proceeded to the Peterboro Cemetery to begin the annual laying of the wreaths.

At each Emancipation Day, those gathered have laid wreaths upon the graves of Gerrit Smith and one freed slave who rested at Peterboro Cemetery. This year, the group recognized Harriet Russell. In 1841, the Russell family consisting of Samuel, Harriet, and their five children, were purchased by Gerrit Smith. With a wealth worth billions by today’s metric, Gerrit Smith was an ardent philanthropist who purchased and freed many slaves. The Russell family went on to have a sixth child, who was born free in Peterboro.

Gerrit Smith took great pains to ensure the family arrived in Peterboro comfortably. Smith said when travel accommodations were being made, a train ticket would mean the family would be forced to ride in the cattle car. So instead, he opted for a stagecoach and was met with more resistance from other travelers not wanting to sit next to a black family.

So instead, Gerrit Smith purchased the stagecoach and the horses outright and ensured the family could travel in comfort in style.

“This is what hit me. Here’s a family living in the slave quarters, and a few days later, they’re traveling across the United States like royalty in their own carriage with their own driver,” Smith said. “That was the commitment of Gerrit Smith to freedom. And that’s the kind of commitment we need today.”

Though a wealthy man, Smith remarked on the humility of Gerrit Smith, who insisted on a small, modest headstone where he was buried. And before the laying of the wreath, Dot Wilsey, National Abolition Hall of Fame Museum Historian, asked those in attendance for a small change.

“Gerrit would insist on having the smaller wreath,” she said. Those in attendance agreed, and the large wreath that the group intended for Gerrit Smith was instead set aside, and the smaller one was reverently placed upon Gerrit Smith’s grave.

“We remember and honor these folks and their memory for what they endured,” Smith said. “I can’t say enough. They were working within the parameters of this grand American experiment. And that experiment continues, ‘We hold these truths to be self-evident.’”