Tips and possible solutions toward making the community safer were among the topics discussed during the city’s first Public Safety Meeting at South Rome Senior Center on Wednesday night. 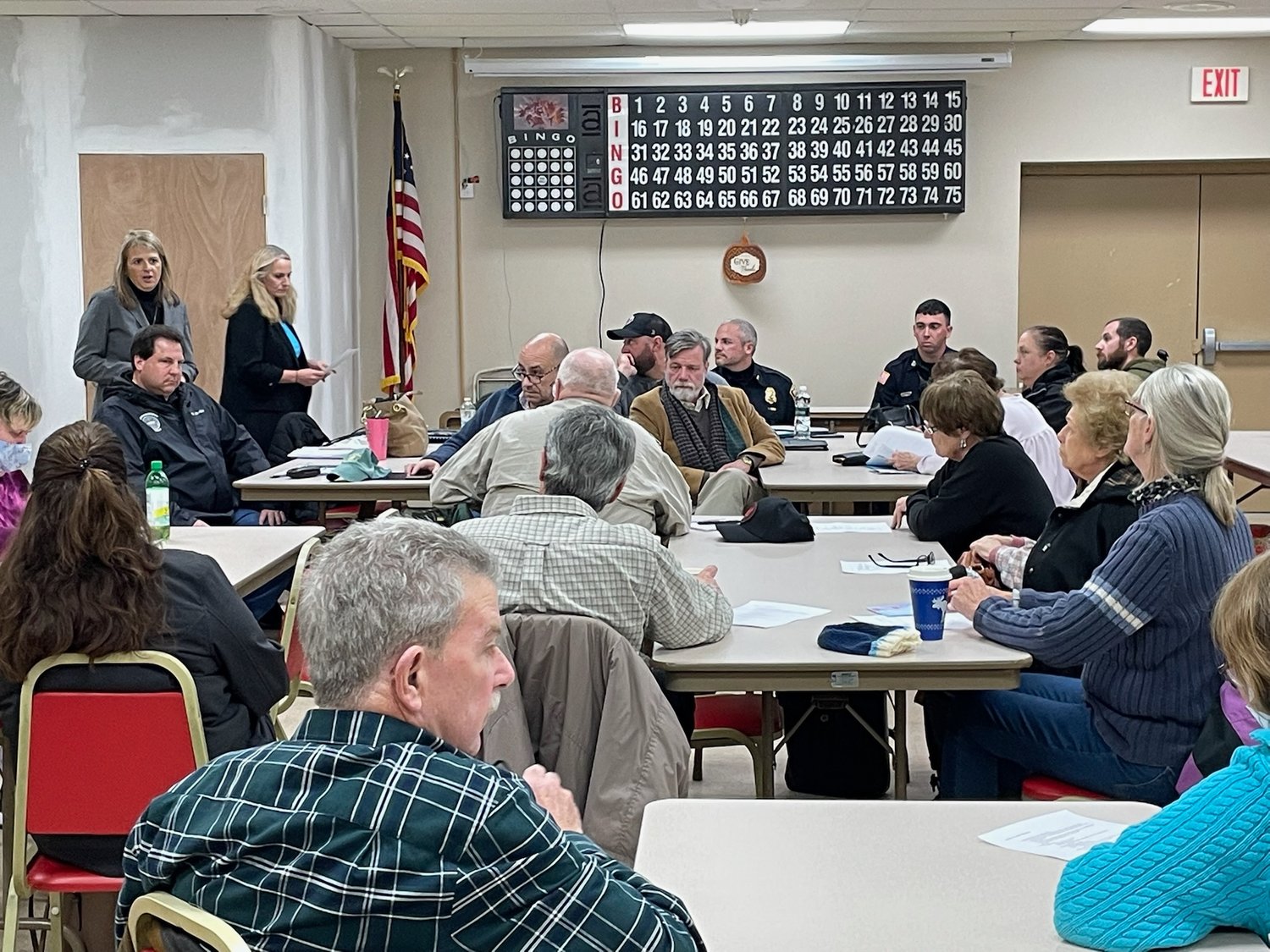 ROME — Tips and possible solutions toward making the community safer were among the topics discussed during the city’s first Public Safety Meeting at South Rome Senior Center on Wednesday night.

City councilors opened the meeting — organized in response to recent complaints of increasing crime — by explaining its goal and possible outcome. Besides councilors, members of Rome Police and the city Codes Enforcement Office represented the administration, who discussed crime and ways to address it with some 30 community members and business owners.

Rome Police Capt. Bryan M. Zoeckler said he and the police department “100% supported” what the council and community were doing. “I have full confidence in the men and women on our police force, but we can’t do our job effectively without help from the community,” Zoeckler said.

Police need residents to “be good witnesses and speak up when they see something,” he added. “We can’t do our job without public support. You” residents “are here because you care, and maybe we’ll hear some ideas that maybe we didn’t come up with, that we can look into and implement.”

Attendees were broken up into groups to address specific issues:

Business owner Michael Uvanni said the city needed to put forth an effort in building its Codes Department. “The more codes people we hire, the more money the city can make — it’s a no-brainer,” Uvanni said. “It’s just like when crews go out to mow the grass and they put it on your tax bill.”

Dennis Perfetti, who has been vocal at council meetings especially since his son’s business, Bill’s Variety, was robbed at gunpoint last month, suggested a meeting with Mayor Jacqueline M. Izzo.

“Why can’t we have a meeting with the mayor where we can address our concerns directly to her?,” he asked.

Rogers suggested that concerns be addressed with the mayor during the public comment portion of Board of Estimate & Contract meetings that meet Thursday mornings following Wednesday Common Council meetings.

“I know there’s a lot of issues, but we’re in it together,” said Sixth Ward Councilor Riccardo D. Dursi Jr. when addressing his Neighborhood Crime group. “A lot of people are concerned with things happening in Rome — it’s a city-wide issue” and the COVID-19 pandemic did not help matters.

“The only way to make neighborhoods safer is by making people more aware and educated,” Dursi said.

Brenda Klara suggested that residents should make a point to get to know their neighbors and surroundings.

“I feel when you’re out in your neighborhood, whether you’re doing yard work or you’re out for a walk, if you see someone, say hello and go talk to them,” Klara said. “That way if someone is around that you notice is not from the neighborhood, they can see that people are out asking questions and being pro-active. You should be getting to know who’s out there, even if you’re just sitting out on your front porch — make eye contact.”

“I’m a landlord and I live in the neighborhood — we need to know what the Public Nuisance Law is capable of doing, and what it’s not capable of,” said Ladd. “The problem with the nuisance law is that it has no heat as long as” a landlord is “compliant with codes, but what about domestic (violence) stuff — doesn’t the nuisance law cover that?”

Members also suggested that landlords be held liable if police are called to a residence numerous times for incidents involving problem tenants.

Civilian police volunteers “can be the eyes and ears for the police department when they’re not there where people need them to be” at the time, Sparace said. Re-instating the Civilian Police Academy was also discussed.

“We want to give residents the opportunity to to see what it takes to work within the police department,” said the councilor, adding that the academy educates residents about Penal Law, Criminal Law, Vehicle and Traffic Law and community policing.

Registration for the Civilian Police Academy is going on now until Dec. 16. Members will meet every Wednesday from 6-8 p.m. from Jan. 11 through March 22. More information is available on the Rome Police Facebook page.

Seventh Ward Councilor A. Robert Tracy and Fourth Ward Councilor Ramona L. Smith reared the Community Resources group, which discussed what programming and partnerships could be made available to help people struggling with addiction or homelessness.

“Utica has one, but we don’t have a Warming Center in Rome and we’re looking at how we can do that here,” Councilor Tracy explained. Tracy said the group also talked about forming a Crisis Response Team where a social worker or mental health professional can “go out on a call” related to mental health with police to assist.

As for the homelessness issue, Tracy said it would be important to “get up to speed” on what the Rescue Mission and Neighborhood Center can and cannot do to assist the homeless and help combat the issue.

“For our first” upcoming “Educational Meeting, maybe we can have an explanation of the nuisance law and have a discussion with the city Corporation Counsel to see what can be added” to the law,” Viscelli said.

“Then we should go to our police — the people on the ground working — to see what they need to make it (the law) work,” added Smith.

Overall, Viscelli said there were positive outcomes that came from the city’s first Public Safety Meeting.

“Every marathon starts with one step. This is the start line,” and not all the solutions “will happen in one night,” said Viscelli. “But I’m proud of the steps that were made, and I think we will start to see a rebuild of our city.”